With eight minutes still to go before PMQs, Sir Keir Starmer was already in place: legs crossed, back as straight and rigid as a cadet on drill parade.

And what a study in diligent organisation he was. The hair was perfectly gelled, shoes polished to a shiny buff, his collection of notes all beautifully arranged in neat little bundles as befits a former barrister.

Forgive me for speculating, but I suspect he’s the type who’s up with the sparrows, showered and shaved by the time Radio 4 pips 6am. (Probably even lays his clothes out on the trouser press the night before.)

Such a marked contrast to the chaotic figure who came charging through the double doors behind the Speaker’s chair at 12.01pm, panting, spluttering, face flushed and bloomed as a bottle of beetroot juice.

Sir Keir once again poured ridicule on the Government’s test and trace scheme, which was revealed this week to have missed 16,000 positive tests.

Unlike Sir Keir, Boris Johnson does not strike me as a morning person.

More the sort of late riser on whom even the snooze button eventually gives up.

When he bundles his way out of his Downing Street flat, half-eaten slice of toast dangling from his hand, my guess is he’s yanked on whatever item he found on the floor that Dilyn the dog hadn’t used as a swaddling blanket the night before.

Such a gaping chasm in preparation between the two is increasingly evident whenever they do battle.

Yesterday, Sir Keir once again poured ridicule on the Government’s test and trace scheme, which was revealed this week to have missed 16,000 positive tests.

Sir Keir pointed out that £12billion had been invested in the system, and yet had come undone because of a basic Excel error. ‘Intergalactic incompetence’ was how he described the cock-up.

Boris conceded there had been a ‘glitch’. But no problemo, he insisted, it was all sorted now.

His tone was that of a barber who, having accidently shaved off half your hair, sighs: ‘Oh, well, it grows back, you know.’

Already, I could see the muscles in the back of Starmer’s neck tightening like cheesewire at this blasé response.

He yearns for the PM to take him seriously. He is, after all, a very serious man. He moved on to the issue of local lockdowns, none of which, he pointed out, seemed to be doing any good. 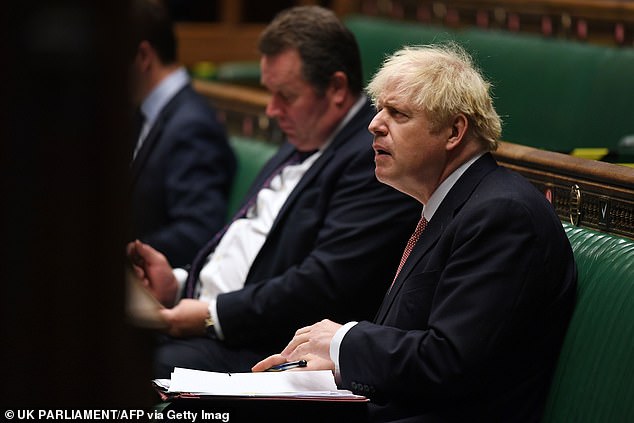 In 19 of the 20 areas hit with increased restrictions, infection rates have actually spiked.

In Rossendale and Hyndburn they have gone up tenfold. Boris’s face puckered. Sir Keir was hitting him with detail. How he hates detail!

Rather than answer the question, he raised the fact that Labour abstained on Tuesday’s ‘rule of six’ vote. ‘He asks what we are doing to enforce local measures.

‘He cannot even be bothered to get his own side to support them himself!’ Loud cheers.

Sir Keir’s frustration by now was bubbling. ‘These aren’t trick questions!’ he yelled. After another exchange, he fumed: ‘This is getting ridiculous!’

It is clear that week on week, Starmer is becoming increasingly irked by his opponent.

He reminds me of a mustard keen tennis player desperate for a competitive game, yet always left having to face someone interested only in playing silly trick shots.

The only revealing moment came when Sir Keir demanded the Government publish the scientific evidence that led to the 10pm curfew.

Many Tories are considering opposing the curfew when it is voted on next week.

Sir Keir’s intervention suggested Labour might now be willing to join them. naturally,

Boris declined his request. Why? Because there is no science behind the curfew. It’s total gibberish. Even the overly cautious eggheads at Sage don’t believe in it.

Instead, the PM chided Starmer for flip-flopping, having supported the curfew when it was introduced.

‘That is not new leadership,’ he yelled. ‘That’s no leadership.’

When the session ended, Starmer beetled off like a man leaving a theatre feeling thoroughly shortchanged – and not for the first time.

As for the Prime Minister, he shuffled away slowly, throwing gleeful fist pumps at any colleague who walked in his direction.