HENRY DEEDES watches a rookie at the despatch box

Barrel-chested raconteur from Nottingham somehow won over the House: HENRY DEEDES watches a rookie at the despatch box

Rugby players describe it as a ‘hospital pass’. Anyone who played the game at school will know the scenario all too well. A team-mate suddenly offloads you the ball just as a 15-stone brute approaches. Crunch! Next thing you know you’re waking up in a hospital bed, bruised, battered and probably minus a couple of front teeth.

One can imagine such a scene playing out in the Whips’ Office on Wednesday evening shortly after Andrea Leadsom resigned from the Cabinet.

Mark Spencer was probably preparing to make an early exit for the Bank Holiday weekend only to find himself collared by his boss Julian Smith.

Never heard of Spencer? No, me neither. No-one in the Press gallery had laid eyes on him before either. That, presumably, was why he was given the ball. Expendable, you see. Cannon fodder.

Thursday morning business questions is a typically demanding session. It is where the Commons does its weekly housekeeping. There is a whingey, Town Hall feel to it. ‘When are we getting this? When’s that being fixed?’ etc.

As Leader of the House, Leadsom bossed it effectively. She was a no-nonsense chatelaine. A bit like all-knowing Nurse Ratched in the film One Flew Over The Cuckoo’s Nest, ruling over the madhouse.

Yet here we had a junior whip with zero experience at the dispatch box and barely a few hours’ revision under his belt. After the week that the Government has endured, this had all the makings of a digit-curling embarrassment.

Spencer, however, a barrel-chested raconteur from Nottinghamshire, somehow won the House over with self-effacing charm. The main query of the day was what on Earth was going on with the Prime Minister’s new EU Withdrawal Agreement Bill. Members were still clueless as to when it might get its second reading. Spencer’s problem was that he was clueless, too.

He flicked through his ring-binder with its many colourful sticky notes attached. Nope, nothing there. His boss Julian Smith’s spidery frame lent over to whisper a few pointers.

Eventually, Spencer flashed an apologetic smile and said there were plans to publish the bill in the week beginning June 3 but added: ‘We’ve been unable to secure agreement by the usual channels.’ Translation: The Prime Minister has gone AWOL. 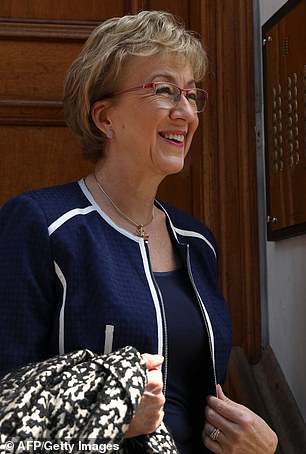 As Leader of the House, Leadsom bossed it effectively. She was a no-nonsense chatelaine. A bit like all-knowing Nurse Ratched in the film One Flew Over The Cuckoo’s Nest, ruling over the madhouse

The opposition benches didn’t seem to mind this most unsatisfactory answer.

Had it been one of those Cabinet junior dullards, Labour would have gone for the kill. But Spencer appeared to earn a reprieve so they indulged him.

His opposite number, Valerie Vaz (Lab, Walsall South), whose arteries hardly froth with the milk of human kindness, smiled appreciatively at the answers he was able to muster.

She saved her venom for the Prime Minister, who she said was ‘incapable of keeping her word’. Spencer even got the Speaker chuntering.

When Maggie Throup (Con, Erewash) asked this Man of Nottinghamshire to take the opportunity to wish his constituents’ football rivals Derby County luck in this weekend’s Championship play-off final at Wembley, he replied it was ‘the worst question he has ever had’

Justin Madder.s (Lab, Ellesmere Port and Nelson) congratulated him on his meteoric rise. Spencer’s wry response: ‘What goes up must come down—I think that if he watches this space, it will come down quite rapidly.’

On the evidence of this new boy’s performance yesterday, let us hope not.

Throughout the morning, there had been warm tributes to Philippa Helme, the Principal Clerk of the Table Office (whose duties include swearing in all new MPs) on her retirement after 35 years in the Commons. She plans to go sailing and spend time with her dogs.

Sir David Amess (Con, Southend West) expressed regret that she was leaving at a time when Parliament, in his opinion, was at ‘an all-time low’.

How telling that not a single voice in the chamber demurred.