Usually when Matt Hancock delivers the Downing Street press briefings he does so with the mildly snooty air of Monsieur Ambassador from those cheesy Ferrero Rocher ads.

On Wednesday there was a tweaked sense of humility about the Health Secretary as he entered the No 10 State Dining Room. His body language radiated a sense of vexed urgency.

His brow was corrugated, his eyes a liquorice wheel of dark swirls. Hancock had come to address the social care catastrophe highlighted by this newspaper throughout the week.

We have revealed the explosion of coronavirus cases among care home residents that has resulted in thousands of deaths, many of which were not even included in daily government figures.

There was a tweaked sense of humility about Health Secretary Matt Hancock as he entered the No 10 State Dining Room. His body language radiated a sense of vexed urgency.

Hancock wanted it to be known he had paid attention to the issue and was getting on top of things. He was getting it done. ‘This is our plan,’ he said. Perhaps it was me, but I couldn’t help but detect the slightest note of anxiety in his voice.

As of now, he said, all care home residents coming back from hospital will be tested before returning. There would be a new online delivery system for personal protective equipment (PPE) to supply care homes.

He wanted to ramp up care recruitment, offering to pay the training costs of new cadets. There was also a tokenistic plan to launch a special care workers’ badge like the blue one NHS workers wear. 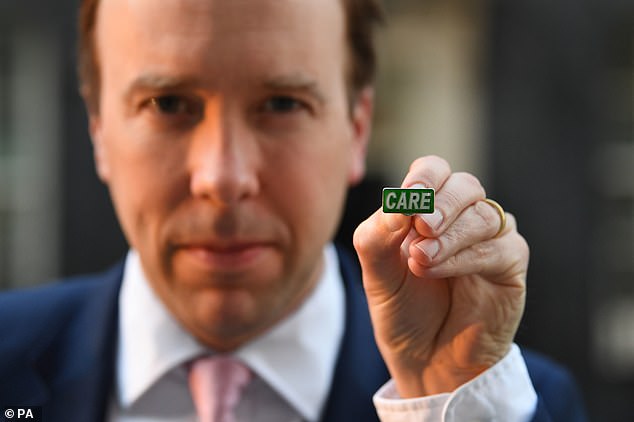 ‘This badge will be a badge of honour,’ he said, raising his snout triumphantly in the air. His presentation made the right noises, but then Mr Hancock is a politician of rare perceptiveness.

His political antenna, finely honed under the tutelage of that other wily operator George Osborne, picks up more signals than the Hubble space telescope. If there is a criticism it is that he sometimes lacks empathy.

He can speak compassionate words but they rarely sound particularly cuddly. When you hear Hancock talk of taking the fight to this disease, you find yourself wondering what he’s working to hardest to save: people’s lives or his own career.

In Wednesday’s briefing, there was genuine sensitivity to his language. We heard of plans to give people the right to say goodbye. ‘Wanting to be with someone you love is one of the deepest human instincts,’ he said.

When he brought up the tragic case of Ismail Mohamed Abdulwahab, a 13-year-old boy who died alone from the virus earlier this month, Hancock admitted the incident had made him weep.

Hancock’s half hour – actually it was more like an hour since he does tend to prattle on a tad – featured cameos from deputy chief scientific adviser Dame Angela McLean and England’s chief medical officer Professor Chris Whitty.

Dame Angela took charge of the slide machine and said she was starting to see a ‘flattened curve’ in the epidemic. Whitty sadly didn’t share all her optimism. He expects the number of deaths to increase on Thursday.

The Press also remained sceptical. The BBC’s Hugh Pym asked Hancock how care home residents would be tested when testing for NHS staff thus far had been so useless. Hancock breezily replied they were building capacity all the time.

Alex Thomson from Channel 4 News suggested the Government had been slow addressing the problems in care homes as priority had been given to younger people, leading to unnecessary deaths.

‘Neither of those things is the case,’ Hancock insisted. For all the barbed questions, Hancock seemed minded to shower hacks with compliments.

‘Such an important question!’ he yelled at a female journalist from The Spectator. Another scribe was congratulated on his work. There was even a kindly word for a reporter from his local Suffolk paper, the Eastern Daily Press.

Defensiveness? Possibly. But he certainly fared better than department colleague Helen Whately, roasted at the hands of Piers Morgan on ITV’s Good Morning Britain earlier in the day.

Hancock at least arrived with a plan up his sleeve, though we could have done with him producing it far sooner.