The herbal opioid substitute kratom has been linked to 28 salmonella infections in the US, the CDC warned today.

Kratom is marketed as a plant-based supplement to treat pain, anxiety and depression but its similarities to opioids have raised concerns that it can be addictive and dangerous.

The substance has also been blamed for the deaths of at least 36 people, according to warnings issued the Food and Drug Administration in November.

Now, the CDC is urging Americans to steer clear of all forms kratom which they say is the culprit in salmonella infections in 20 states.

Kratom has sickened people in 20 states, including three in California, according to the CDC

Beginning in October, at least 28 people with salmonella infections have reported that they consumed kratom – in capsule, powder or tea forms – prior to developing symptoms including diarrhea, vomiting, abdominal pain, fever and chills.

At least 11 people have been hospitalized for severe infections after being sickened by the plant product.

Three people have been sickened in California, where the kratom is legal (except in San Diego, which passed a city ordinance against the substance).

Cases have also been reported in Ohio, New York, Pennsylvania and Oregon to name a few.

The Centers for Disease Control and Prevention (CDC) also warned that, because symptoms of infection can take up to four weeks to appear, people who consumed kratom after January 28 may yet get sick.

Salmonella is a bacteria that most commonly associated with foods like eggs and poultry, but in recent months it has been cropping up in usually unsuspected foods like spices.

When the FDA began investigating the increase in contamination to imported spice in 2013, the agency warned that ‘general filth’ could allow the bacteria to get into these products.

The CDC has been unable to trace the recent salmonella outbreak to any particular brands or distributors, and has issued a broad advisory notice against the use of the supplement.

‘At this time, CDC recommends that people not consume kratom in any form because it could be contaminated with salmonella,’ the agency warned.

Safety checks of kratom products – which Amazon sells for around $20 – are tricky because the substance falls into a legal and regulatory gray area in the US.

These products are made from the eponymous plant. A member of the coffee family, kratom grows natively in Southeast Asia where its leaves are well-known for their psychoactive effects. 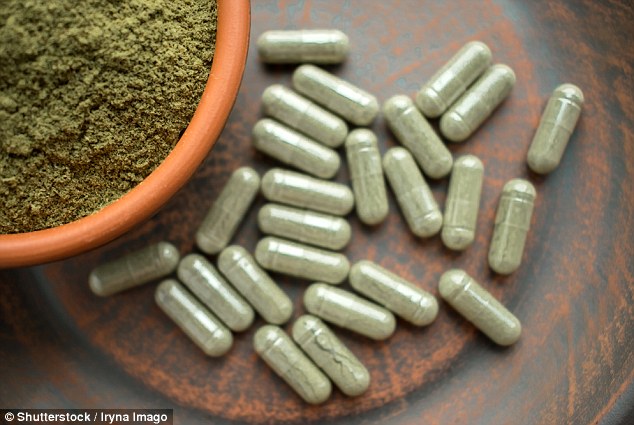 Powders, capsules and teas made from the herbal alternative kratom have been linked to salmonella infections in 28 people in the US, the CDC announced Tuesday

As it has made its way to the US, kratom has gained a reputation as an opioid alternative to help people wean themselves off of the dangerous and addictive drugs with milder withdrawal symptoms, but there have not been clinical studies to prove this.

Kratom contains alkaloids which bind with the same opiate receptors in the brain that prescription and street opioid drugs do.

Earlier this month, the Food and Drug Administration (FDA) announced that it had found evidence of opioid compounds in kratom, and said that its own investigation, taken together with other chemical studies ‘have clearly revealed, compounds in kratom make it so it isn’t just a plant – it’s an opioid.’

But because there are no FDA-approved uses of the substance, the agency can do nothing more than warn the public.

The Drug Enforcement Agency (DEA) tried to have the substance classified as a Schedule 1 drug – alongside heroin, ecstasy and marijuana – in 2016, but the attempt was met with public outrage, and Congress urged authorities to allow the public to comment on kratom before outlawing it.

So with the two agencies hamstrung, kratom remains in a federal limbo, although it has been banned in Alabama, Arkansas, Illinois, Indiana, Tennessee and Wisconsin.