Disturbing footage shows a herd of 20 terrified horses galloping on the M25 near the Dartford Crossing, moments before one of them was hit and killed by an incoming lorry.

The animals can be seen veering towards the central lane as they try to escape traffic on the motorway during the night.

They move together but repeatedly stop as cars behind them are forced to slow down to ensure they do not injure the herd.

The herd of 20 horses, pictured, can be seen galloping towards the central reservation as they try to escape the traffic

The animals were on the Essex side of the crossing, close to junction 30 for Lakeside Shopping Centre.

Essex Police closed the Kent-bound section of the road for about an hour at 4am this morning when one of the animals was fatally injured.

He posted the video to the Facebook page ‘Kent Traffic and Travel’ in the early hours of this morning. 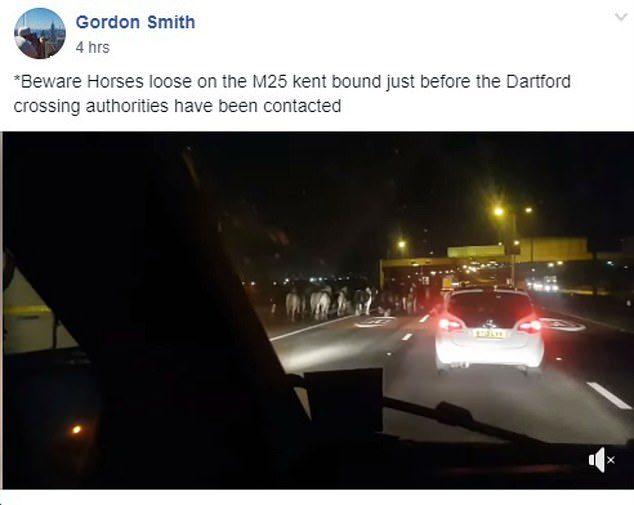 Social media users commented the footage, showing their concern for the terrified horses

He wrote: ‘Beware, horses loose on the M25 Kent bound just before the Dartford Crossing. Authorities have been contacted.’

The police confirmed one of the horses died at the scene, but the lorry driver was fine: ‘Low speed and no damage to the truck or injury to him (not nice to be involved with but not his fault though),’ they wrote on Twitter.

‘Sadly one horse died after hitting a HGV before we could shut the road, a lane is closed whilst we arrange removal so expect delays,’ Essex Roads Policing Unit- South tweeted.

It is believed the other horses were brought to safety.

Social media users commented the footage and showed their concern for the terrified animals.