Here are the relationship signs you can’t afford to miss

When you’re newly in love, you often convince yourself that everything is fine because you want the relationship to work. But there are warning signs that you shouldn’t dismiss, says marital therapist Andrew G Marshall

When you first meet, he’s vague about his relationship status, or he’s on his phone a lot and you’re banned from going anywhere near it. If pressed, he admits he’s seeing someone but it’s ‘nothing serious’. Months later, you find out that the girl in question was devastated when he eventually ended their relationship because he’d led her to believe they were going to marry.

Why you ignore it You’ve been brought up to be honest and you can’t imagine why anyone else wouldn’t be. When you tentatively voice your doubts, he gets all huffy or goes on the attack and before long he has convinced you that it’s you who has the problem because you are too suspicious or too needy.

Why you shouldn’t One red flag doesn’t necessarily mean the end of the relationship – especially as it’s now more acceptable to date several people before agreeing to be exclusive. But if he persuades you with consummate ease that you are imagining things, it probably means he’s done this many times before.

The Hard Sell comes too soon

Although you’ve only just met, he makes extravagant statements about love, throws money around, drops hints about ‘for ever’ and is so relentless in his pursuit that he might even find out where you’re going to be and turn up uninvited.

Why you ignore it It’s incredibly flattering – especially if you’ve been disappointed in love previously. Everyone wants to believe that falling in love is just like in the movies: you’ll meet someone, he’ll sweep you off your feet (because he’s really into you) and all your problems will fade away.

Why you shouldn’t If you take a step back, you will realise that it’s not just you that he’s trying to convince – he needs to believe that this is love with a capital ‘L’ himself. He has finally found the woman who is going to ‘save’ him or at least give him enough of a romantic high to overlook that he is up to his neck in debt and his last ten relationships ended messily.

He blames other people for everything

His ex-wife was unfaithful, she makes it difficult for him to see his children and they never had sex. His former business partner stole from him and his boss is on his back all the time. It’s your friend’s fault that he was flirting with her and when he lost his temper with another motorist it was because they were ‘driving like an idiot’.

Why you ignore it You are in love or well on the way and that means you support each other and watch each other’s back. Moreover, you feel sorry for him and want to help him turn his life around. And, because he’s so convincing, you tell yourself your friend can be a little ‘free with her favours’ and you weren’t driving so you didn’t see the other vehicle.

Why you shouldn’t At the start of the relationship, when he’s crazy in love, you can do no wrong. But before long, something will be your fault and therefore you will – in his mind – ‘deserve’ his wrath. He doesn’t have enough insight to realise there is one factor in common with all these disasters: himself.

He has sexual issues

Beyond the first flush of lust, there are problems with your lovemaking. Perhaps he never wants to initiate sex (so it’s always up to you) or he claims not to be interested, refuses to hold your hand in public, or doesn’t like to be touched. Alternatively, he has unusual sexual tastes or interests which you don’t share.

Why you ignore it You tell yourself there are more important aspects of a relationship; you buy helpful books and you’ve always got some plan to resolve the issues (even though all previous attempts have foundered).

Why you shouldn’t Men are brought up to ignore their feelings but pay a lot of attention to their sexual desires, so don’t believe his protestations that problems in the bedroom don’t matter. Perhaps he divides women into the madonna or a whore, which could mean you’re the ‘perfect’ woman with whom he can’t be sexual and he’s getting ‘down and dirty’ with someone else.

He disappears for chunks of time, with some lame excuse. There are holes in his stories that don’t make sense. He doesn’t have any long-term friends and he has fallen out with his brother for some dark reason that he won’t discuss.

Why you ignore it You tell yourself that you’re better than his suspicious ex so push everything under the carpet. When he’s in a good mood you don’t want to spoil things, and when he’s grumpy you don’t want to pour petrol on the fire.

Why you shouldn’t Your gut is telling you that something is wrong. Things don’t add up because he’s lying and, worse still, he’s so good at deception that he has even convinced himself he’s right.

There is always some crisis. His ex is about to sue him for unpaid child support or some ‘deluded’ woman at work has accused him of harassment. Alternatively, he gets drunk, picks a fight and storms off into the night – taking the car and leaving you to get a taxi home.

Why you ignore it You tell yourself that everything will be fine once you’re over this bump in the road.

Why you shouldn’t You’re too busy fire-fighting to notice the bigger picture: these incidents aren’t one-offs, they’re the norm. He is either addicted to drama or the sort of risky behaviour that is almost guaranteed to throw up problems. On top of that, many of his ‘solutions’ – such as counter-claiming – make matters worse, not better.

He has a volcanic temper

When things don’t go his way, he shouts, throws things or thumps the wall. Although he has never threatened you physically, his behaviour is frightening and you end up walking on eggshells to avoid another meltdown.

Why you ignore it He either pretends that you are making a big deal out of nothing or wins you round with flowers and promises to change. Before long, he has convinced you that it’s you who has everything out of proportion and you start to question your own judgment.

Why you shouldn’t If he reminds you of a five-year-old having a temper tantrum it’s because he’s stuck in this early development stage. His problems are deep-seated and all the reassurance and believing in him is not going to turn around your relationship. He is using his temper to control you and maybe even to distance you from friends and family who might help you realise that the red flags are not only adding up but are getting progressively more serious.

He is always talking about getting married or says he wants a big family, but his actions indicate the opposite. His work is so pressurised that he can’t spare the time for a honeymoon or he was about to propose but then you had that row…

Why you ignore it When you challenge him, he either bursts into tears and lists all his woes or is so full of righteous indignation at being doubted that you always back down. Alternatively, he swears blind he never made the promise or ‘you took my words out of context’. So arguments become about arguments, go round in circles and you’re too tired to fight. 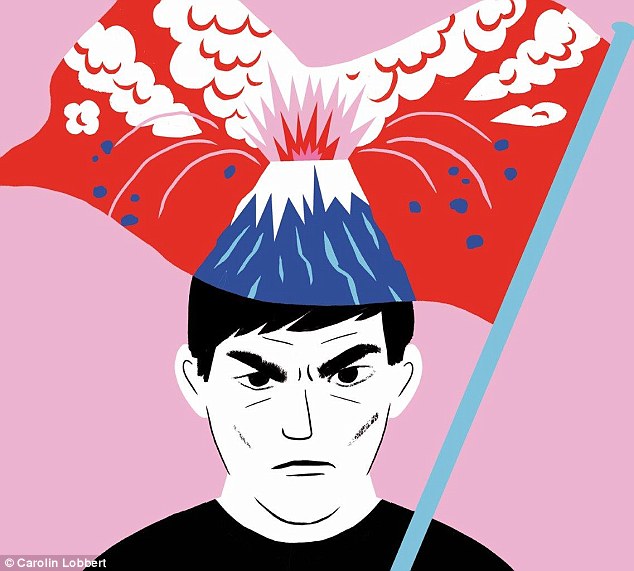 Why you shouldn’t He doesn’t play by the same rules as you. He always has to win and that makes you the perpetual loser. Do you really want to live like this?

He has a complex relationship with his mother

She is either unpredictable and nothing he does is ever good enough, or he is the apple of her eye and can do no wrong. He will either rant about her for hours or not have a word said against her. She will either hate you for no good reason or try to be ‘special friends’, which makes your skin crawl. The one thing guaranteed is that you’ll have strong feelings about her.

Why you ignore it You feel sorry for him for always having to dance attendance to his mother or for being made to feel small. So you try to help him understand her better or offer ways to patch up their relationship.

WHY YOU AVOID THE RED FLAGS

You are vulnerable You have recently come out of a long relationship and are naive about dating or too trusting. Perhaps you’re on the rebound from someone nice but dull and confuse the adrenalin rush of fear with love.

You believe in love You might scoff at the excesses of romcoms, but you fall hard and easily in love. So when a charming man gives you his spiel, even though he doesn’t really believe it, you certainly will.

You have low self-esteem You normally hold men at arm’s length because you think you’re too old or not attractive enough, but charming men like a challenge (it boosts their own low self-esteem) and once he’s past the first line of your defences, you open your heart far too quickly. It normally takes three months for couples to decide if they are boyfriend and girlfriend, and 18 months to establish whether their relationship has a future.

You were trained to put up with difficult men by your father He was always the source of drama in your childhood, so while other women will run at the first sign of extreme behaviour – such as threatening to self-harm if he doesn’t get his own way – it all feels strangely familiar.

You are bored Your life has not been fulfilling recently or you haven’t challenged yourself enough. However, running around after a difficult man or trying to please one is not the sort of excitement you need.

Why you shouldn’t Boys learn how to deal with women by watching how their fathers are with their mothers. His dad will have either run away, by closing down emotionally or by physically disappearing, or tried to appease his wife, becoming depressed or full of unexpressed rage. Is your partner simply repeating his father’s behaviour? If his mother was critical, he will interpret your actions through this lens. If he was the perfect son, he will hear everything beyond a round of applause as abject failure.

At first, it might seem romantic that he books an exotic holiday for two without checking you can get time off work. However, it quickly becomes a major problem. He buys an expensive new car, even though money is tight, or tells you he has quit his job – without prior discussion – and is setting up his own business.

Why you ignore it If you’re married or have children by this stage, you convince yourself to look the other way. After all, you’ve had plenty of practice at minimising and rationalising away your fears.

Why you shouldn’t While every relationship needs some give and take, you’ve been doing all the giving and, apart from a few isolated instances, which he reminds you about constantly, he has been doing all the taking. Ask yourself, apart from when he’s trying to win you back, has he any real desire to change?

■ Andrew G Marshall is a marital therapist and author of Wake Up and Change your Life: How to Survive a Crisis and be Stronger, Wiser and Happier, published by Marshall Method Publishing, price £12.99