Once a crucial cog in the wheel of British industry, Britain’s 2,200 navigable miles of canals make for a brilliant staycation.

Take the tiller on your own narrowboat and plot a mellow course through some of Britain’s most fascinating rural and urban landscapes.

Length? About 50ft, usually. Top speed? A heady 4mph. Pleasures to be had? Plenty.

LOCKS (AND DRAMS) IN SCOTLAND

The Falkirk Wheel on Scotland’s famous Union Canal, where you can do a looping trip from Falkirk to Glasgow via Edinburgh

Confident boaters can test their skills on Scotland’s famous Union Canal. It takes roughly a week to do a looping trip from Falkirk in the lowlands to Glasgow via Edinburgh.

How to keep morale high on a route with 14 locks and two major cities? A wee dram on Edinburgh’s Princes Street should help; a mooring spot lies not far from the famous thoroughfare.

GOOD TO KNOW: The Falkirk Wheel is an engineering marvel that joined two canals separated since 1933. Hitch a lift up 80 ft from the Forth and Clyde Canal before being sent on your way to the Union Canal by this futuristic-looking gondola.

BOOK IT: A week on the Alvechurch Wren, sleeping six, costs from £1,999 (abcboathire.com). 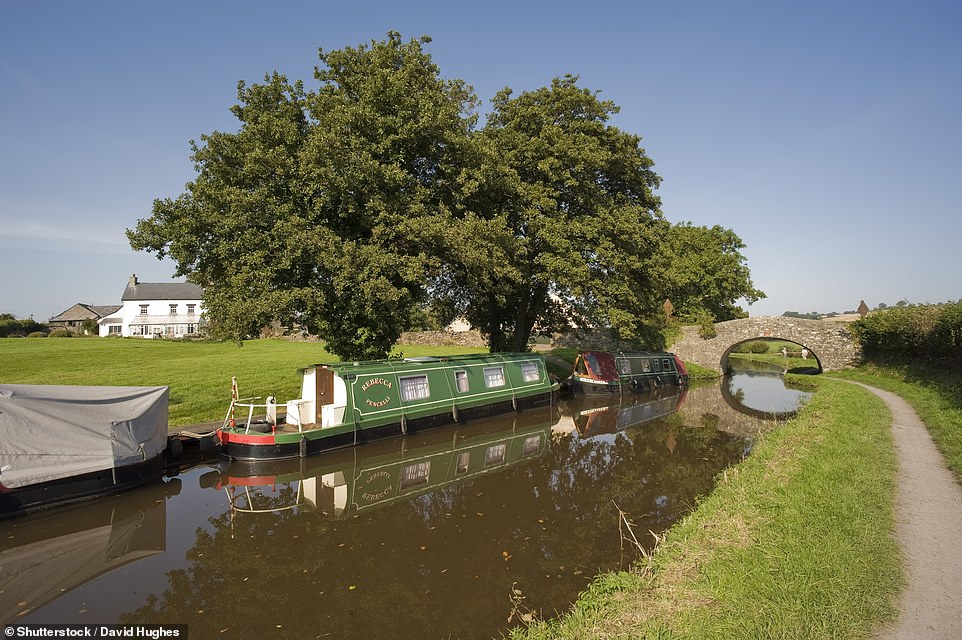 The Monmouthshire and Brecon canal, which takes in 33 miles of fine South Wales scenery

A dancing blue squiggle on the Brecon Beacons’ map may not look like much — but it turns out to be one of Britain’s most beautiful waterways.

Cast off in Gilwern, half-way up the Monmouthshire and Brecon canal, 33 miles of fine South Wales scenery known as the Mon and Brec, and spend a week cruising north-west to Brecon and back, on waters where coal, iron and limestone were once transported.

GOOD TO KNOW: There’s a village every four miles, plus six locks, five lift-bridges, a tunnel and several aqueducts. And, to the west, the majestic Beacons rise 3,000ft on the horizon. 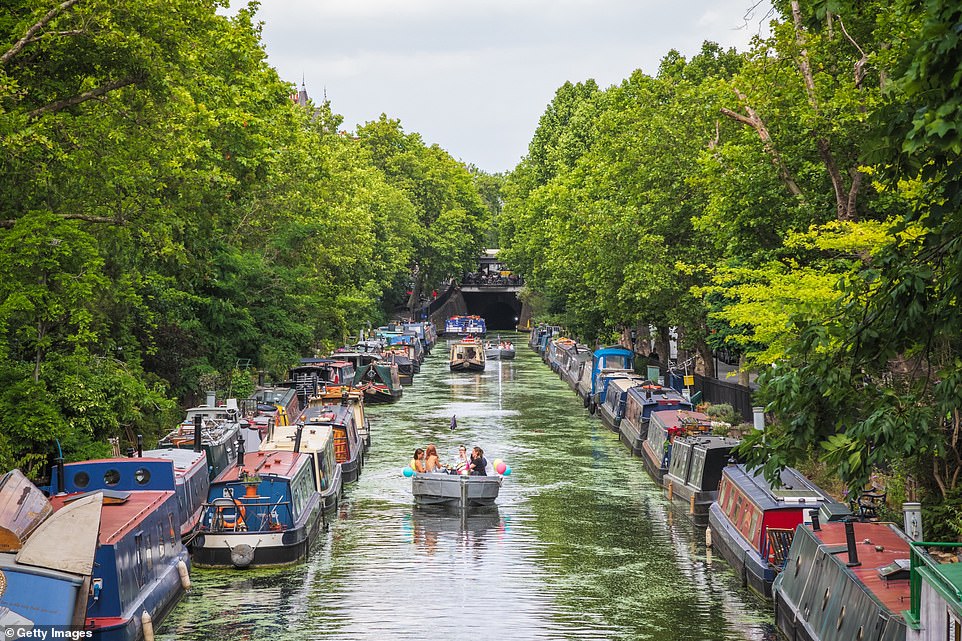 The exclusive enclave of Little Venice on Regents Canal in London. From here you can sail past London Zoo to Camden Market

Snub the M25 and glide into the Big Smoke on your own floating abode. In a week you can sail east from Base 50, near Reading, down the Thames to the exclusive enclave of Little Venice in Paddington Basin, and back again.

Cruising along London’s river requires a little steel, but there’s untold rewards in watching the capital — by turns, pretty and gritty — slowly introduce itself.

CHOCOLATE IN THE BLACK COUNTRY 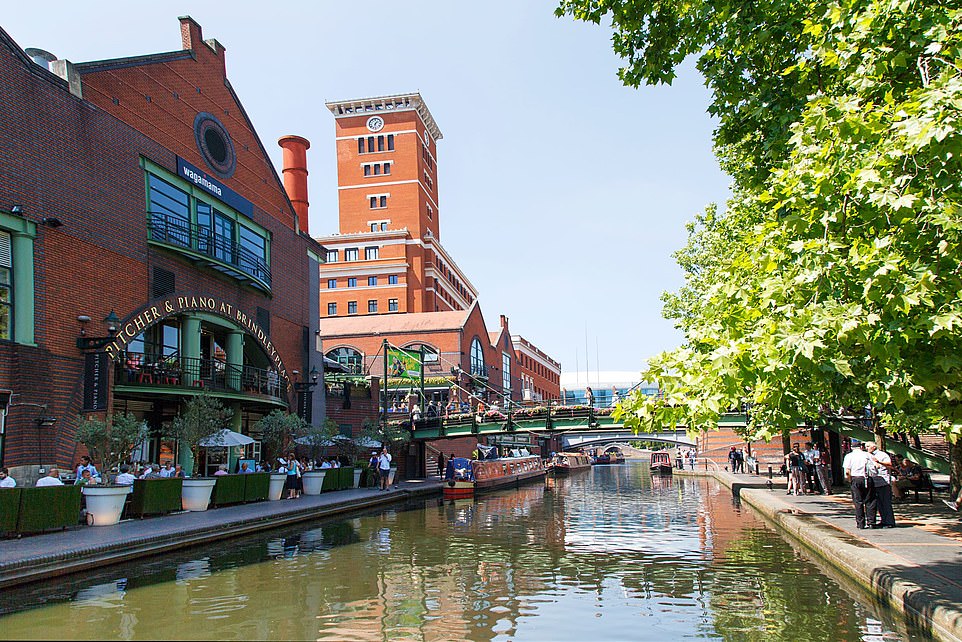 Part of the 30-mile, 58-lock Worcester and Birmingham canal, which flows through the industrialism of ‘Brum’

Follow in the wake of 18th-century cargomen on the 30-mile, 58-lock Worcester and Birmingham canal. The landscape dovetails the industrialism of ‘Brum’ and Wolverhampton with some idyllic Worcestershire countryside.

Great for families, with Cadbury World among the possible pitstops.

GOOD TO KNOW: Navigating the creepy Wast Hills Tunnel, with its dark, dank interior, takes a nerve-shredding 30 minutes but the experience is exhilarating.

BOOK IT: Taking the Gailey Medway narrowboat, sleeping four, on the Black Country ring for a week costs from £777, departing Stafford (hoseasons.co.uk). 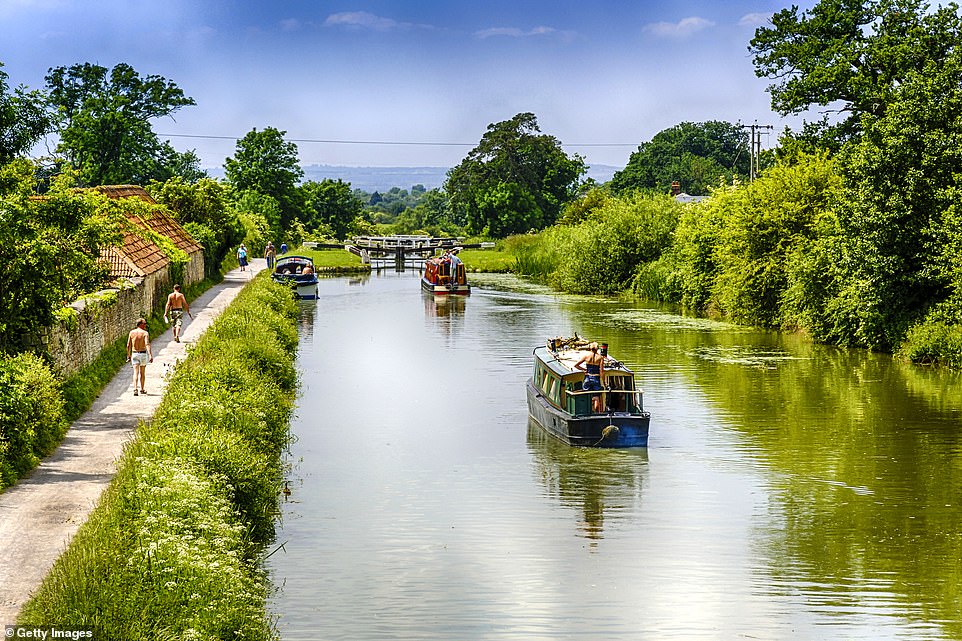 The West Country’s Kennet and Avon Canal, which is lined with honeysuckle-hued towns

Honeysuckle-hued towns line the West Country’s Kennet and Avon Canal. Enjoy a week-long return trip from Bradford on Avon to Bristol, via Bath.

Nature fans will love the wildlife too, with kingfishers, newts and otters all easy to spot in these waters.

BOOK IT: A seven-night trip costs from £1,649, sleeping four (black-prince.com). 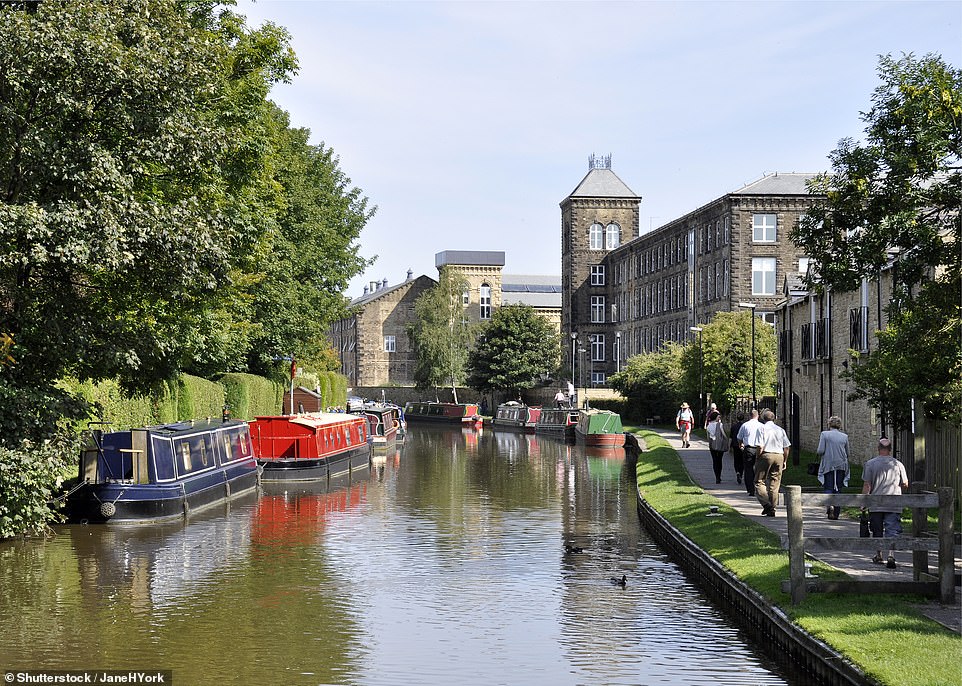 Skipton in North Yorkshire, which is on Britain’s longest canal, the 127-mile Leeds to Liverpool Canal

Britain’s longest canal is blissfully peaceful in parts. Start up in the middle of the 127-mile Leeds and Liverpool Canal around Skipton to see the best of it in a week.

GOOD TO KNOW: Pass gorges, limestone caves and heather-carpeted hills in the dales to the north, while the Bronte parsonage in Haworth is to the south.

BOOK IT: A week-long holiday on Drummer Boy, sleeping seven, costs from £1,420 (silsdenboats.co.uk). 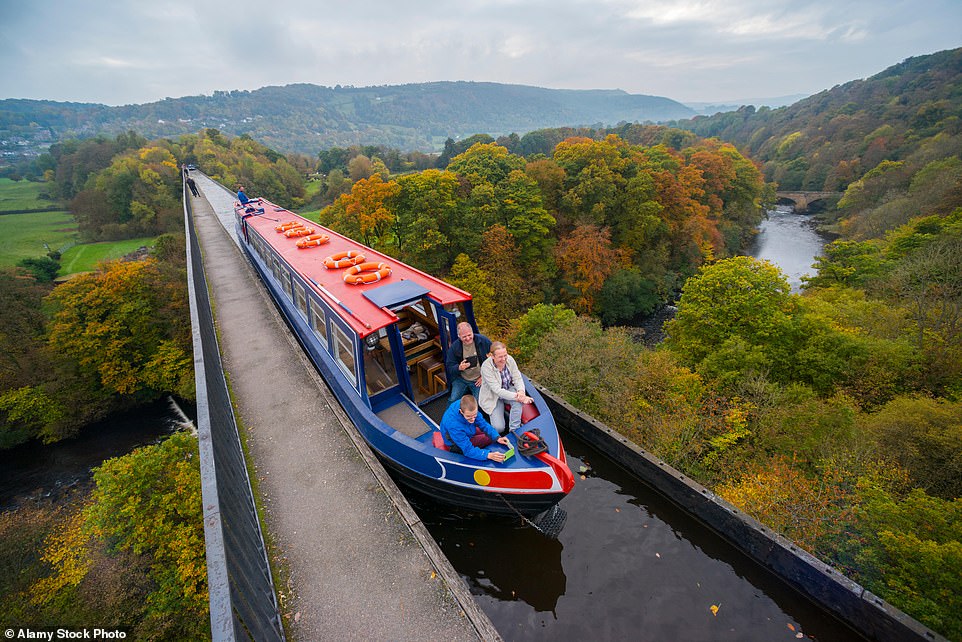 The Pontcysyllte Aqueduct, which soars 126ft above the Dee Valley on the Llangollen Canal that links England and North Wales

A three-night taster trip pootles 28 miles in serene scenery; think pretty market towns and the rugged green of the Berwyn Mountains beyond them, before the relative metropolis of Llangollen itself edges into view.

GOOD TO KNOW: The UNESCO-listed Pontcysyllte Aqueduct soars 126ft above the Dee Valley.

A PUNT AND A PINT ON THE CAM 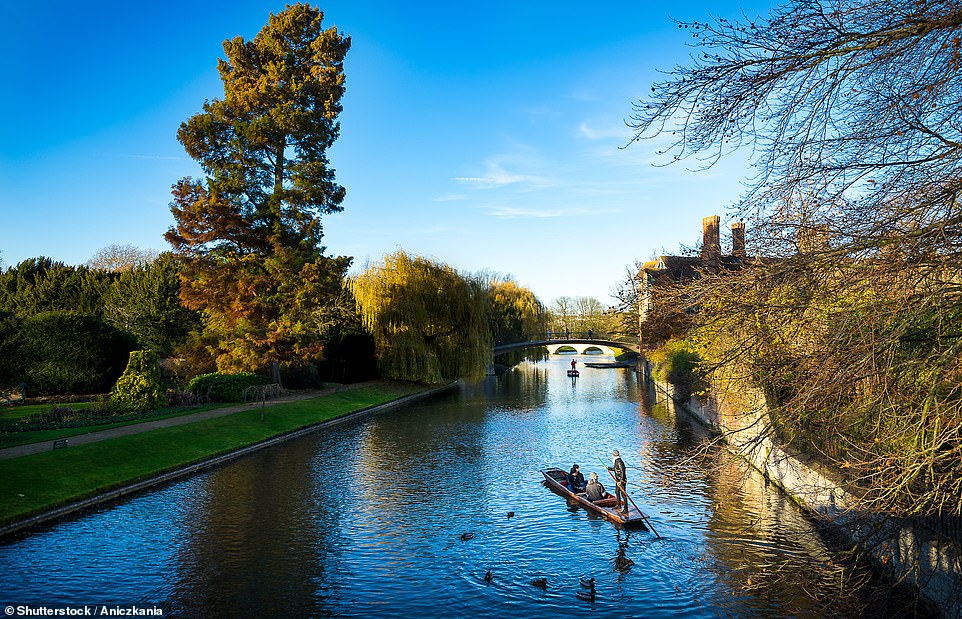 The River Cam in Cambridge, pictured, which is an unsung alternative to the Norfolk Broads

An unsung alternative to the Norfolk Broads, the River Cam is famous for its Pimm’s-clutching summer punters, but join a little earlier, from the northerly River Ouse at Ely, and emerald waters, swaying willows and riverbank pubs are all yours. Ideal for beginners, Ely to Cambridge and back takes just ten hours.

GOOD TO KNOW: Sup a pint in 16th-century Cambridge pub the Green Dragon, where Oliver Cromwell once honed his knife-throwing skills. The hallowed architecture of the historic university campus is all around.

The broad appeal of a narrowboat: Soaking up your surroundings at a top speed of 4mph

By Jennie Bond for the Daily Mail 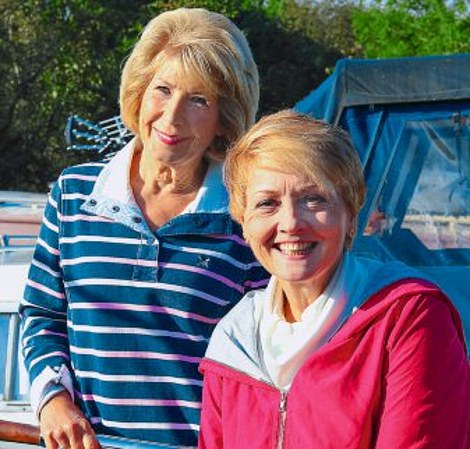 Canals are wondrous creations. Long or short, straight or surprisingly bendy, they form a network which offers travellers a very different way of life.

I’m a new convert, after taking part in Celebrity Britain By Barge with Anne Diamond, Pete Waterman and Bill Oddie, in which we navigated our way along six British canals. I loved every minute of it.

I have to admit that I’m more used to cruising on ocean-going liners, so I wasn’t sure how I’d feel about living on a narrowboat which, as its name suggests, isn’t exactly spacious.

Imagine my joy, then, when I found that all the boats we hired had reasonable living areas, plus two loos, decent shower rooms — and one of them even had a tiny bath. Mind you, the bath caused us to run out of water almost immediately. Another joy is the peace and pace of canal life.

Suddenly your world is transformed into one where the top speed is 4 mph, often even slower. There’s so much time to soak up your surroundings: the countryside, the wildlife, the old mills and the industrial history of the landscape. Every now and again — well, actually, rather more often than that — your progress is interrupted by a lock, or sometimes a series of locks.

And, as I discovered, operating one is pretty hard work. But we all need a bit of exercise, and there are also some wonderful people along the canals who volunteer to help. We took full advantage of their kindness.

Narrowboats are lengthy, lumbering beasts, and learning to pilot one was quite a challenge. You have to think ahead and steer accordingly, often under low bridges or through long, dark tunnels.

A strong wind can play havoc, especially when you’re trying to navigate a series of bends. But that’s all part of the fun, and I heard more than one fellow boater say that it really is a contact sport.

You’re surrounded by history on the canals. There was a moment of magic in Scotland when a beautiful palace slowly came into view as we meandered down the Union Canal. 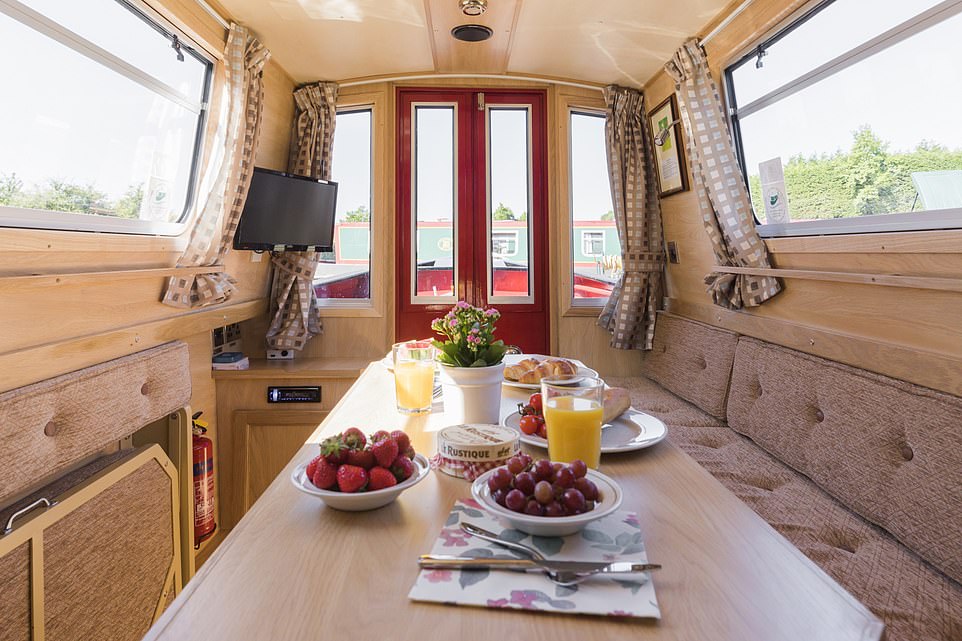 Inside a narrowboat. Jennie says that they are lengthy, lumbering beasts, and learning to pilot one was quite a challenge

We stopped to explore, and found it was the remains of Linlithgow Palace, where Mary Queen of Scots was born. On the Leeds and Liverpool Canal, old mills tell the story of the industrial revolution, and the many converted stables are a reminder of the horses that pulled the barges.

But it’s not all about the past. At Falkirk there is the most astounding piece of modern engineering: the world’s only rotating boat lift. The Falkirk Wheel is a work of genius, carrying boats 80 ft into the air from the Forth and Clyde Canal up to the Union Canal.

If you’re new to narrowboats, like me, you’ll find a great sense of camaraderie on the water; everyone is willing to help.

And there’s really nothing quite like boating all day, working the locks, savouring the views and then tying up by a converted old stable block and enjoying a cosy pub meal, before heading back to your floating home.