A cat showed amazing bravery as it was attacked by a pair of invading coyotes in the early hours of Thursday.

Security camera footage shows the 16-year-old feline called Tigger being encircled by the wild canines on a driveway in Azusa County, Los Angeles.

As they move in on the stripey orange cat he holds his ground and when they get too close, he snaps back at them.

The 16-year-old cat called Tigger is confronted at each side by the pair of coyotes on his driveway in Azusa County, Los Angeles on Thursday night 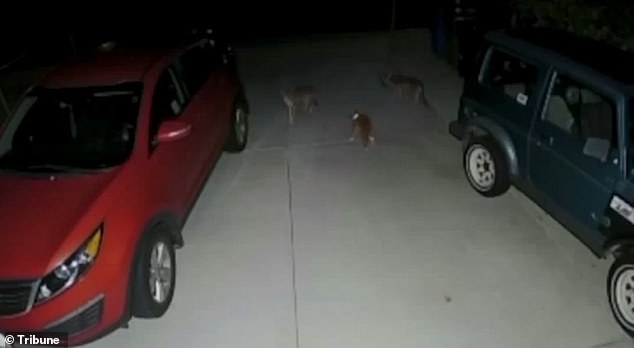 They scurry off but return moments later for another go and again the much smaller animal chases them off the property.

The motion detector alarms woke up Tigger’s owners Ed and Beth Hayes who went to go and see what was going on.

Beth told KTLA: ‘I took off running down the hall thinking I was going to come out to a dead cat and as I opened up the door the cat came through the cat door.

‘He looked like he’s stuck his finger in a light-socket – I mean, his hair was just bing. 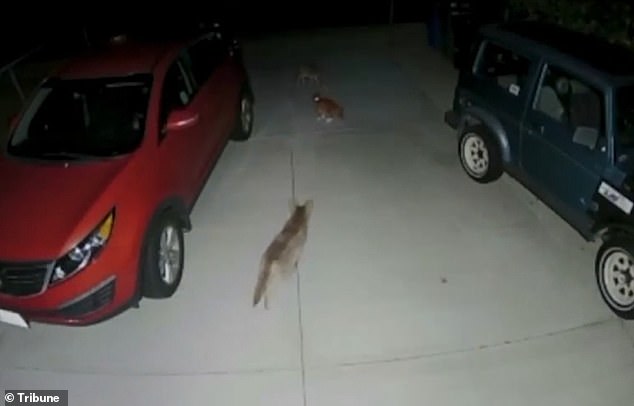 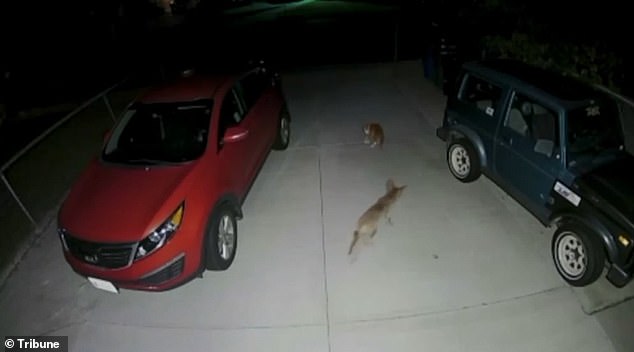 But Tigger notices what the coyote is trying to do and turns to chase him away – owner Beth Hayes said: ‘I think he’s traumatized’

‘He hasn’t been out all day we let him out about an hour ago to eat. I think he’s traumatized, I know I was.

‘He belonged to my mom and I promised my mom I would take care of him.’

Coyotes are widely distributed throughout North America and are capable of killing sheep, goats and cattle, let alone cats.