Hero policeman nicknamed ‘the Hoff’ after jumping in river

A police officer has been nicknamed ‘The Hoff’ after risking his life to save a drowning man – by jumping into a freezing river.

Student officer PC Mohammed Nadeem had seen the man standing by the edge of the water on Saturday afternoon.

The Greater Manchester Police trainee watched as specialist officers started negotiating with the man – but suddenly he fell into the freezing River Irwell, in Radcliffe.

PC Nadeem jumped in to rescue him, grabbed hold and despite the plunging temperatures he dragged him to safety.

Supt Rick Jackson of GMP’s Bury Borough, said: ‘As with any incident that we respond to, the safety of the public is our number one priority.

‘Sometimes that means putting them first, ahead of your own safety.

‘The man is now safe and receiving the treatment he needs.

‘They were a prime example of why people join the force, to protect people and make sure they are away from harm.

‘He’s also gained the nickname ‘The Hoff’ by his colleagues so I’m sure he won’t be forgetting this anytime soon!’ 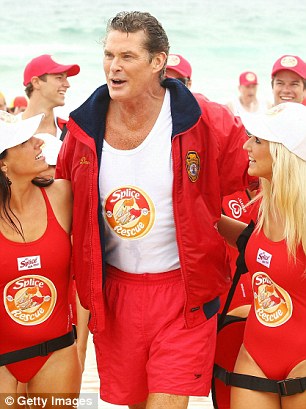 Yesterday, both rescuers said both men were in a state of ‘near hypothermia’ when they were pulled from the river.

Greater Manchester Fire and Rescue Service crew manager Ted Dorrington said: ‘The river was in flood so it was quite deep.

‘The issue that we had was that they were only 10 or 15 feet from a weir which recycles, having a tumble drier effect, so we were wary of that.

‘It is a big hazard on a river, especially with it being in flood.’

The man and the brave officer, also aged in his 30s, were then handed over to paramedics who dried them off and took them hospital.

Mr Dorrington said: ‘The police officer was that cold that we had to take his clothing off and put a foil blanket on him.

‘He was shivering and dithering when we got him in to the ambulance.’