Heroes defend Harry from MP who ridiculed his Army record

Emma Dent Coad wrongly claimed the fifth in line to the throne failed his Army helicopter pilot exams and played no active part in battle.

She also accused Prince Philip of being unfaithful to the Queen. But injured veterans last night rallied to Harry’s defence.

Veterans and friends of Prince Harry defended him after his service record was called into question by Labour MP Emma Dent Coad. David Wiseman, captain of the UK team at the Invictus Games, tweeted: ‘Who voted for this clown?’

David Wiseman, who was wounded in Afghanistan and is now captain of the UK team at Harry’s Invictus Games, tweeted: ‘Who voted for this clown?’

The former Yorkshire Regiment infantryman, who was left partially paralysed by a Taliban bullet in 2009, said the timing of the Kensington MP’s remarks was ‘astounding’.

Former Army major Dr Jen Warren, vice-captain of the UK team competing in Canada, said: ‘There are 550 people out here plus all their family and friends who are telling you that is [rubbish]. Harry is a hero.’

Bernie Broad, a former Army major with the Grenadier Guards who lost both his legs below the knees in an explosion, added: ‘Anyone who signs up for the Armed Services is putting their life on the line for Queen and country. 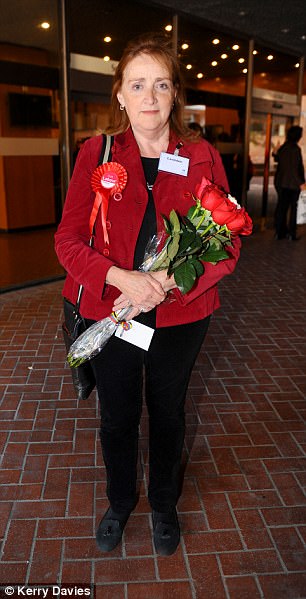 Ms Coad, the MP for Kensington, claimed the prince cannot fly a helicopter while also accusing Prince Philip of being unfaithful

‘[Harry] is an amazing, amazing man. He joined the [Army] Air Corps and the selection for that is treacherous.’

Astonishingly, Miss Dent Coad claimed that she was the victim as she refused to apologise for her smears.

Even after her accusations about Harry were exposed as a lie, she insisted she had been told it was an ‘absolute fact’ that the prince did not fly the Army’s Apache helicopters himself.

She also stuck by her claims about the Duke of Edinburgh’s infidelity, saying: ‘Everyone knows what’s going on.’

But Dr Warren, a former member of the Royal Army Medical Corps, praised the prince for his ten years of military service and his Invictus Games, a Paralympic-styled event for injured service personnel. The mother-of-one said: ‘He talks to the competitors, he talks to the crowd, he doesn’t shut himself off or put himself on show.’

The prince showed the remarkable bond he has with veterans yesterday as he awarded a silver medal to a former Royal Marine who lost both legs and an arm in Afghanistan.

Mark Ormrod, who had begged his comrades to ‘put a bullet in his brain’ after being blasted by a roadside bomb, won silver for indoor rowing at the Games.

The 34-year-old father of three and the prince – who is regarded as a friend after they met in 2008 – embraced warmly as Harry proudly handed him the gong.

Miss Dent Coad, 62, launched her rant at a fringe event at Labour’s Brighton conference on Tuesday.

Claiming the 33-year-old prince ‘can’t actually fly a helicopter’, she said: ‘He tried to pass the helicopter exam about four times and he couldn’t get through it at all so he always goes for the co-pilot. So he just sits there going ‘vroom vroom’.’ 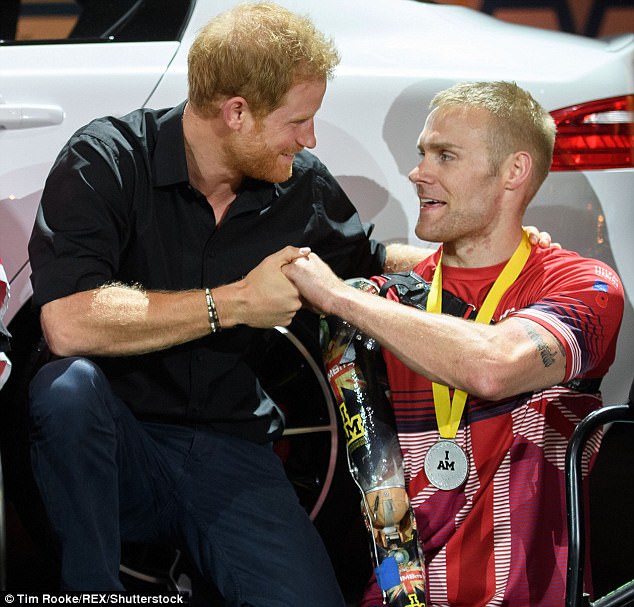 Mark Ormrod, who won silver in rowing at the Invictus Games, begged to be killed after losing three limbs but is now a firm friend of Harry’s

The MP also joked about the 96-year-old Duke of Edinburgh, saying: ‘He’s been mucking about for years, he’s not been a faithful husband.’

Following a backlash, Miss Dent Coad complained yesterday that she was now being ‘called everything under the sun’.

She told the London Evening Standard: ‘I was just poking fun. But we need a proper debate about the royal family.

‘Why are taxpayers funding them? Why can’t I disagree?

‘It seems like we are not allowed to have an opinion.’ She accused the Press of being ‘in charge of the narrative’.

Appearing on the BBC’s Daily Politics, the MP said: ‘I’ve been told that’s an absolute fact that somebody sits beside him and drives the helicopters for him.’

Later, she said she would ‘hold her hands up’ if she was wrong.

Questioned on her accusations about Prince Philip, she added ‘everyone knows what’s going on’.

Defence minister Tobias Ellwood last night called on Miss Dent Coad to attend the Invictus Games herself to see how the prince ‘inspires our injured heroes’. 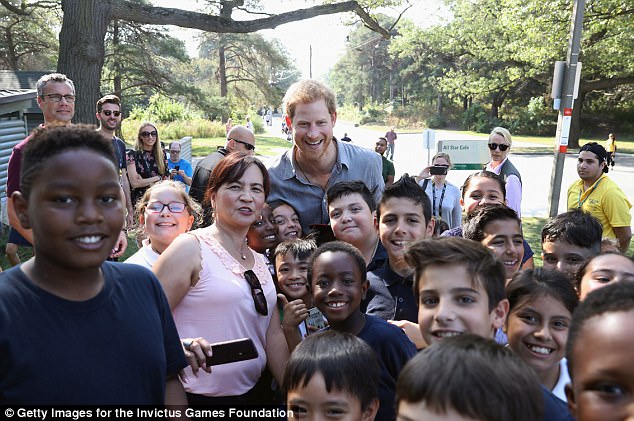 Tory colleague Maria Caulfield said the Labour MP should resign for ‘betraying her parliamentary oath’ in which she pledged her allegiance to the Queen and her heirs and successors.

During his ten-year full-time military career, Harry went on two tours of duty to Afghanistan. During his second tour in 2012 he served on operations in his role as co-pilot gunner.

He passed further tests needed to pilot the Apache and those required to become a commander. In Afghanistan the co-pilot gunner would often fly the aircraft back to base at the end of a mission.

A spokesman for Mr Corbyn last night refused to say if he agreed with Miss Dent Coad’s comments.

Miss Dent Coad provoked controversy in July when she compared the Duke and Duchess of Cambridge to American reality TV family the Kardashians. She has said she ‘despised’ the way tax is spent on the royal family.