‘He’s going to kill football!’ Donald Trump rails against Roger Goodell for allowing football players to kneel and compares NFL commissioner to Joe Biden for making announcement in a t-shirt ‘from his basement’

Donald Trump lashed out at NFL Commissioner Roger Goodell Sunday morning for going back on banning professional football players from kneeling for the national anthem.

The president also bashed Goodell for dressing too casually for the video announcement posted earlier this summer, and compared him to presumptive Democratic nominee Joe Biden, who created a makeshift television studio in his basement to accommodate for virtual appearances in the midst of the coronavirus pandemic.

‘I thought this was over,’ Trump said of his fighting with the NFL over players kneeling for the American Flag and Star Spangled Banner. ‘And then Roger Goodell, from his basement, like Biden, in a blue t-shirt as opposed to a suit – he looks much more handsome in a suit.’

‘But Roger Goodell got out and made the statement in August or July – out of nowhere – talking about this whole thing that he’s doing,’ the president lamented. 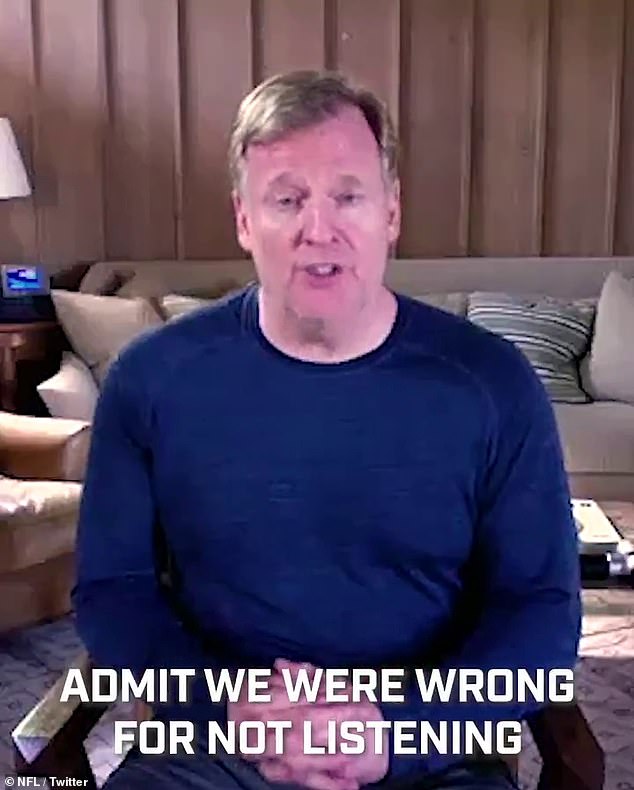 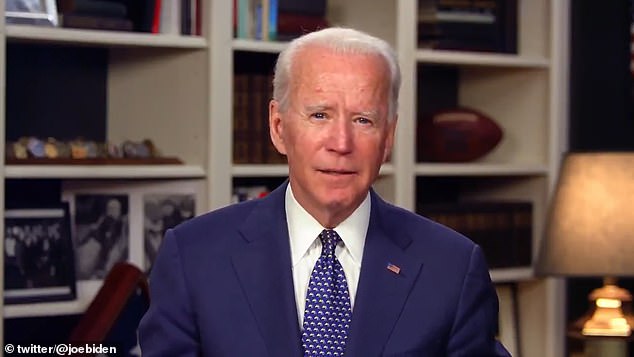 Trump compared Goodell’s announcement to presumptive Democratic nominee Joe Biden, who often shows up for virtual events from his basement studio made to accommodate for interviews and appearances during coronavirus

Goodell posted a video in June where he appeared to encourage players to kneel after there were widespread calls for the NFL to respond after the death of George Floyd, which spared months of nationwide Black Lives Matter protests.

‘Protests around the country are emblematic of the centuries of silence, inequality and oppression of black players, coaches, fans and staff,’ Goodell said during the early June video.

Since taking office, Trump has railed against professional athletes for kneeling at the start of the game while the National Football League has remained locked in a years-long debate with football players over the kneeling protests.

‘I thought we won this battle. I had this battle two years ago with the NFL and their ratings went down 25 per cent, their crowds stopped coming – I mean they had empty seats all over the place,’ Trump complained to Bolling.

The NFL has faced controversy for its initial response to the kneeling protests, which were popularized by then-San Francisco 49ers quarterback Colin Kaepernick.

Kaepernick sued the NFL in 2017, accusing the organization and team owners of colluding to keep him out of the league as a result of his protests.

‘You know what, if I see people kneeling during our National Anthem, if I see people not respecting our country, which is represented by our flag, I will not watch a game,’ he repeated a threat he often makes. ‘A lot of other people agree with me.’

Trump also assured that it is in NFL players’ contracts that they have to stand with their hand over their heart for the National Anthem.

‘There’s plenty of places they can protest,’ Trump said.

‘They make millions and millions of dollars. They’ve got a great life. Think of it,’ he said of those protesting racial injustice and police brutality by kneeling on the field at the start of the game. ‘Their life is not bad. And they have to respect our country.’

In the wide-range, yet shorter-than-usual Trump interview, the president urged that football should return in the fall, but only if players don’t kneel for the American flag.

‘My answer: play football,’ Trump said when asked about the potential of players contracting coronavirus when in such close proximity to one another.