Florin Solomon, 28, had been using his mobile phone just three seconds before he ploughed into the side of a Toyota Corolla car

A lorry driver who killed a decorated former soldier in a 50mph road smash moments after jumping a red light while placing an Amazon order at the wheel of his 40-ton truck was jailed for four and a half years today.

Florin Solomon, 28, had been using his mobile phone just three seconds before he ploughed into the side of a Toyota Corolla car which was turning right on to a dual carriageway in Wigan.

Former army sergeant Mark Byrne, 58, who was driving the Toyota, took the full force of the 49mph impact as the car was hurled into a central reservation. He died at the scene from multiple injuries.

His wife of 38 years Julie, 56, had been in the front passenger seat next to her husband and had to wait for an hour to to be cut free from the wreckage whilst her husband lay dead next to her. She survived the crash but suffered a fractured sternum.

She told Bolton Crown Court: ‘I screamed: ‘It’s a lorry, it’s a lorry’ and I don’t remember anything else until the rescue people were cutting open the car. I was in a lot of pain and I was scared.

‘I tried to turn to Mark but I was told to keep my head still so I tried grabbing his jumper and saying his name. I couldn’t understand why he wasn’t answering and I didn’t know he was dead.’

When arrested Solomon said: ‘I’m going to jail. I went through on amber.’ He later lied to police claiming he had slowed down and suggested Mr Byrne had pulled in front of him. He also claimed he had placed the Amazon order whilst stopped at a junction and was distracted because he and his girlfriend were about to split up. 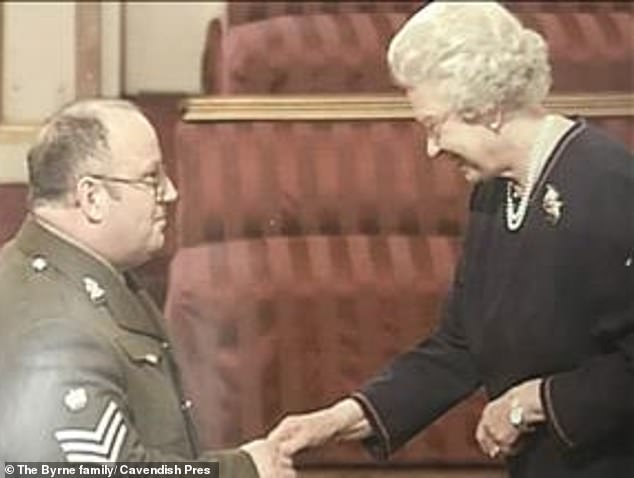 Former army sergeant Mark Byrne, 58, pictured receiving his MBE from the Queen at Buckingham Palace, was killed by a lorry driver who was shopping on Amazon at the wheel

Romanian-born Solomon had been delivering fruit and vegetables in his Scania lorry had had ten seconds to brake when the lights turned red against him – but he flew through the junction after he became distracted due to him checking his Amazon basket.

He closed the app just three seconds before the impact on the A580 East Lancashire Road in Wigan, Greater Manchester.

In a moving statement to police Mrs Byrne told how the accident had robbed her and her late husband of the chance of fostering children in their retirement. The couple were childhood sweethearts who had three children and several grandchildren.

Mr Byrne, a Ministry of Defence civil servant, had previously served in Germany with the Adjutant Generals Corps and was awarded an MBE by the Queen in 2003 for his services to the armed forces.

The couple were also active in their local church, ran a Sunday school together and raised money for various charities including children who were affected by the Chernobyl disaster.

Mrs Byrne added: ‘We did everything together, I’ve lost my soulmate, my lover, companion, helper, carer and best mate. Everything is different now and my plans have changed. I cannot even cuddle my own grandchildren. Getting through each day is a task for me.’

The couple’s son Craig Byrne said: ‘This incident has affected my mum physically and all of us emotionally and financially and has changed all our lives forever. The shock and upset of hearing about this incident over the phone will be a dark memory at the back of my mind for the rest of my life.

‘Mum’s life has been completely changed. She no longer has a husband, she no longer lives independently and is now relying on her father to live with and for me to drive her to doctor’s appointments and the shops. She can no longer follow her dream of fostering children which was their retirement plan. She has had to deal with the trauma of what happened and suffers nightmares.’ 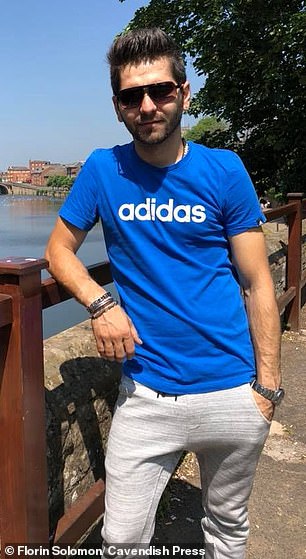 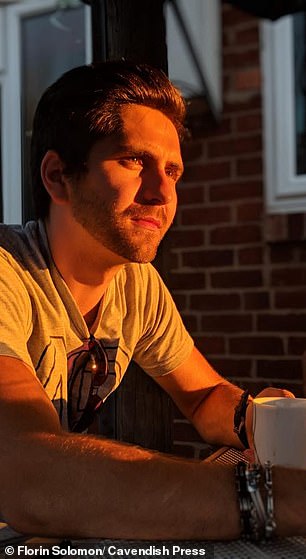 The accident at 10.20am on January 21 this year occurred whilst the Byrnes were returning home to Warrington after a doctor’s appointment. They were in a queue of traffic turning right onto the dual carriageway after the lights had turned green in their favour.

David Lees prosecuting said: ‘Mr Solomon had been driving along the dual carriageway and had moved into the left hand lane accelerated gradually and stayed at that speed as he approached the junction.

‘But he made no attempt to brake and was crossing the junction at 49mph when the collision occurred. The traffic light had been showing red against him for at least eight seconds and he would have ten seconds to think and brake’.

In mitigation Solomon’s lawyer Rebecca Caulfield said her client, an agency worker had a clean driving licence and had never had previous complaints about his driving.

He left Romania at the age of 15, spending 11 years in Italy before moving to the UK and he claimed he was distracted by the imminent break up with his girlfriend of eight years at the time of the crash.

Miss Caulfield said: ‘It was his own stupidity and recklessness that led to the death of Mr Byrne and serious injury to his wife. He is distraught and full of remorse and he will have to deal with killing someone of the calibre of Mr Byrne for the rest of his life.’

Sentencing Judge Graeme Smith told Solomon the damage caused by the crash impact was ‘immense’ and added: ‘The dangers of using mobile phones whilst driving are well known -even more so when driving an HGV because of the size and weight of such a vehicle means the consequences of a collision are likely to be far more serious.

‘Mrs Byrne lost not only her soulmate but also her lifestyle and her home because of the impact of her husband’s death on her financial position. Any case of this nature is a tragedy – in particular for the victims and their families.’