Hidden gay history of the Rosetta Stone is revealed

It is one of the British Museum’s most prized objects, having been key to efforts to decode Egyptian hieroglyphs.

And now the Rosetta Stone is being added to the museum’s lesbian, gay, bisexual and transgender-themed tour after a surprising element of its story came to light.

While most credit scholars Jean-Francois Champollion and Thomas Young with deciphering the stone, the museum has said that William John Bankes also deserves recognition.

Bankes, a politician and Egyptologist, was instrumental in uncovering the meaning of the stone in the early 1800s.

But he was exiled from Britain after being caught having a romantic liaison with a soldier in London’s Green Park – homosexual acts were a crime at the time.

The stone, featuring the same message written in three scripts, Ancient Greek, Demotic, and hieroglyphs, is now being included in the popular LGBT+ tours, which started last year.

The museum’s Stuart Frost said: ‘The first run of tours was booked out within an hour or two, demand was really high, volunteers enjoy doing them and we’ve had great feedback from the public.’

He told The Guardian: ‘Sometimes it is new stories, sometimes it is highlighting stories which are just not very well known because historically they have been overlooked.’

Mr Frost added that most visitors would be unaware ‘that a gay man was instrumental in making the Rosetta Stone one of the most famous historical objects in the world’.

Other objects added to the tour include a Roman terracotta oil lamp showing two women engaging in sex and a Greek coin depicting female poet Sappho. Museums can reopen on July 4.

The British Museum has added a Roman-era oil lamp depicting a scene of lesbian sex and other LGBTQ+ cultural objects to its permanent exhibition.

The museum, which is currently closed due the coronavirus pandemic but usually attracts about six million visitors a year, already runs popular LGBTQ-themed tours.

Five new objects, including the lamp, a novelty ‘nine bob note’, a Greek coin depicting Sappho, Kabuki prints and a medallion from a cross-dressing spy will go on display in the museum.

The terracotta lamp dates back to the first century AD and shows two women engaged in oral sex – something likely ‘taboo’ in Roman society, according to researchers, who say it may just be a depiction of a ‘male fantasy’ rather than reality.

Museums in London aren’t due to start reopening until July 4 but the British Museum wanted to announce the new additions as part of Pride season.

A Roman lesbian lamp depicting two women engaged in oral sex, generally regarded as taboo by the Romans, will form part of the new permanent display 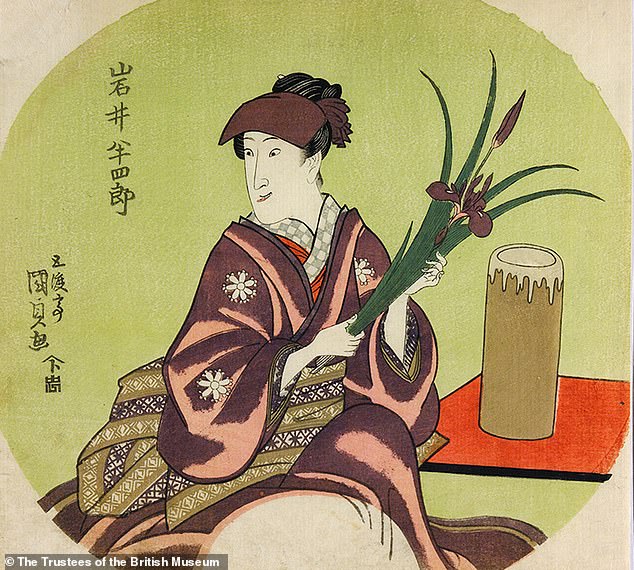 An example of a Japanese wood block print depicting wakashu – male youths – who were desired both by men and women and who, with their androgynous appearance, constituted a ‘third gender’ is also going on show and the prints will change regularly

A spokesperson said they were deliberately chosen to increase representation from across the whole ‘LGBTQ+ initialism’ in the museum’s displays.

They won’t form part of a single exhibition, rather will be included in different displays across the exhibition – with tours available to study them in detail.

FIVE NEW LGBT+ OBJECTS ON DISPLAY AT THE BRITISH MUSEUM

A ‘nine bob note’ made for use in a club event organised by Duckie in 2008 called Gay Shame Goes Macho featuring the image of gangster Ronnie Kray instead of Queen Elizabeth.

A bronze medal of Chevalier d’Eon who was a celebrated 18th-century soldier, diplomat and spy that lived as a man and a woman.

A 2nd century AD coin depicting Sappho issued in Mytilene on the Greek island of Lesbos, to celebrate the city’s most famous daughter.

An example of a Japanese wood block print depicting wakashu – male youths – who were desired both by men and women and who, with their androgynous appearance, constituted a ‘third gender’.

Stuart Frost, from the museum said the addition of the artefacts was part of an ongoing effort to improve the British Museum’s representation of LGBTQ+ history.

‘They join a number of other objects on permanent display that collectively demonstrate that same-sex love, desire and gender diversity have always been an integral part of the human experience,’ he said in a statement.

The first century AD Roman lamp was purchased by the museum in 2005 and is made from terracotta – it depicts two women engaged in oral sex.

This was ‘generally regarded as taboo by the Romans’ and probably represents a ‘male fantasy rather than reality’, according to experts.

However, it has been included in the LGBT+ collection as it ‘is the type of object that could have been used by men or women’.

A 1777 medallion also makes up part of the new collection and it depicts the 18th century soldier, diplomat and spy Chevalier d’Eon who lived alternately as a man and a woman in France and England.

One side of the medal carries a portrait of the Chevalier as a man – but if you look closely, you’ll see the inscription above the portrait reads Madame D’Eon.

‘They lived openly as a man and as a woman in France and England at different stages of life, drawing much public interest,’ a spokesperson said.

‘Charismatic and talented, the Chevalier inspired the production and circulation of images and there are large number of prints of them in the museum’s collection.

‘Today the Chevalier is recognised as a talented and tumultuous personality, who was celebrated both as a man and as a woman during a long and eventful life.’

The most recent item to be added to the LGBT+ permanent exhibition is a fake banknote made for a 2008 club event called Gay Shame Goes Macho.

The note features the image of British gangster Ronnie Kray in place of Queen Elizabeth II and is based on an old ’10-shilling note’. 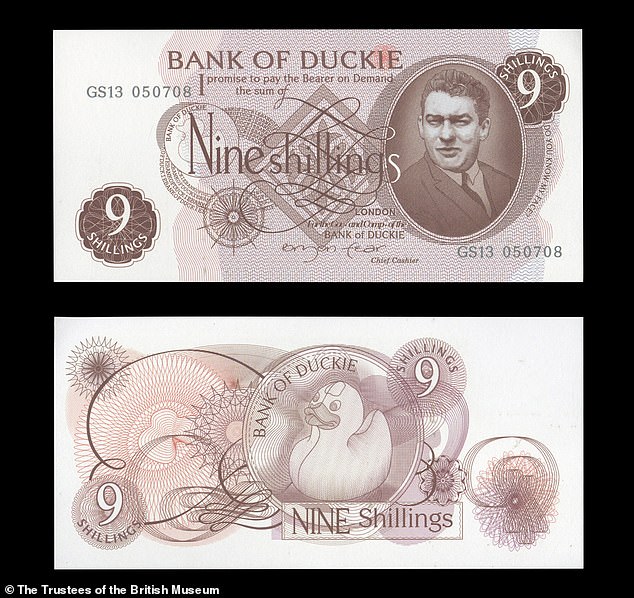 The original 10-shilling note, in circulation in Britain until 1970, was linked to the popular expression ‘as queer as a nine bob note’.

‘This Nine Bob note was made for use in a club event organised by Duckie in 2008, Gay Shame Goes Macho,’ the museum said in a press release.

‘Gay Shame was a reaction to the perceived increase in gender stereotyping and commercialisation of Gay Pride events from within the LGBTQ community.’

In the margin of the Ronnie Kray image it asks: ‘Do you know my face?’

Ronnie Kray was gay – something that was recognised and known by many at the time, the museum team wrote.

Another object added to the collection is a Greek coin depicting the poet Sappho who lived from about 630–570 BC in Mytilene on the Greek island of Lesbos.

This coin was issued by the city over 700 years later to celebrate its most famous daughter at a time when many cities in the Roman Empire produced coins to demonstrate their importance through illustrious ancestors.

It is one of the earliest images of Sappho in the museum’s collection.

‘By the 19th century her poetry had made the word ‘Lesbian’ – someone who lives on Lesbos – a term for a woman who loves women’, a museum spokesperson said.

The final object to be added to the LGBT+ permanent display is a woodblock print of Kabuki actor Iwai Hanshirō – donated to the museum in 2018.

There are many Japanese wood block prints in the Museum’s collection that reflect LGBTQ themes.

Some of these depict wakashu – male youths – who were desired both by men and women and who, with their androgynous appearance, constituted a ‘third gender’. 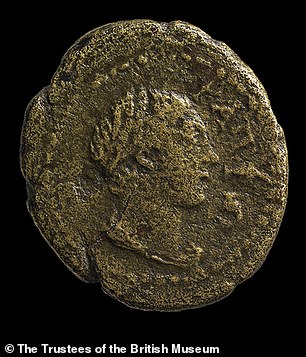 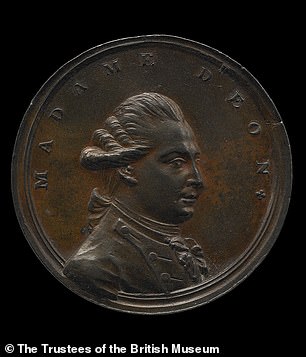 A 2nd century AD coin depicting Sappho issued in Mytilene on the Greek island of Lesbos, to celebrate the city’s most famous daughter (left) and a bronze medal of Chevalier d’Eon who was a celebrated 18th-century soldier, diplomat and spy who lived as a man and a woman (right) will also be on show

Between about 1600 and 1900, thousands of sexually explicit paintings, prints, and illustrated books were produced in Japan – known as ‘spring pictures’ or shunga.

There will be multiple Japanese prints that will rotate on a regular basis depicting similar themes.

Pressure is growing on cultural and historic institutions to reflect LGBT+ heritage in countries including Britain, whose parliament now runs tours dedicated to the hidden history of lesbian, gay, bisexual and transgender lives.

Some of the objects have just returned to the museum after being included in its UK touring exhibition Desire Love Identity.

The exhibition visited five venues and was revealed earlier this year to be the British Museum’s most popular UK touring exhibition in six years.

Sarah Saunders, the museum’s Head of Learning and National Partnerships, said they were looking forward to reopening as soon as is safe to do so.