Hidden hearing aid that can give deaf people 24/7 sound

NHS surgeons are restoring deaf patients’ hearing with a revolutionary ‘bionic ear’ implant with no external parts – making it impossible to tell a person has it fitted.

The battery-powered microphone, processor and motor is placed beneath the skin and within the skull near the ear in a complex operation. After six to eight weeks it is switched on – and the patient can hear again.

Other semi-implantable hearing aids, such as cochlear implants, are already widely available but all have external sound receivers which cannot be worn during activities such as showering, bathing or swimming, when water may damage the electronics.

The battery-powered microphone, processor and motor is placed beneath the skin and within the skull near the ear in a complex operation

Most patients also find it more comfortable to remove the receivers during sleep, and at these times they are once again deaf.

Because all components of the new Carina device are fully implanted, patients are able to hear at all times.

Hearing loss affects about 11 million people in the UK and it is commonly due to problems with the inner ear, where sound-sensitive cells are found, preventing the auditory nerve from transmitting sound signals to the brain.

While there are a host of genetic and disease-related causes, it is most often simply due to ageing.

Conventional hearing aids work by receiving sound through an external microphone, typically worn behind the ear, which sends signals to an amplifier that sits in the ear canal.

In cochlear implants, an electronic receiver is placed into the inner ear which receives sound signals from an external speech processor.

The Carina, however, is totally implantable and effective for hearing loss caused by problems with the outer and inner ear. 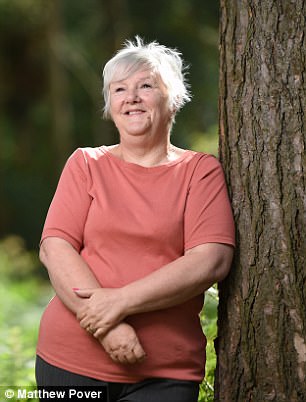 For Linda Oxley, one of the first in the UK to have the Carina implant, the revolutionary hearing aid has changed her life

Professor Jaydip Ray, ear, nose and throat consultant at Sheffield Teaching Hospital, who has implanted three of the ten devices that have been given to British patients so far, said: ‘With this device, people can go swimming or take a shower without having to remove their hearing aid, as they do with conventional devices. The implant provides 24/7 hearing.’

A hand-held remote control enables users to turn the Carina on and off as well as control the volume. The only other piece of external equipment is a small charger which connects wirelessly. The Carina requires just 30 minutes of charging daily.

The device is made up of three parts: a microphone that picks up external sound through the skin; a processor which turns the sound into electrical signals; and a motor that converts the electrical signals into mechanical vibrations.

These cause tiny bones in the middle ear to vibrate and amplify a sound signal to the inner ear.

Surgery to implant the Carina lasts three to four hours, under general anaesthetic.

First an incision is made into the skin directly behind the ear lobe and the microphone – the size of a 20p coin – is inserted between the skin and the bone.

The processor, measuring 1½in, nestles within the large bone on the side of the head.

Finally, the motor is placed inside a plastic tube and screwed in place, inside the middle ear.

Patients are left with a tiny scar and a small bump behind the ear. After six to eight weeks, the hearing aid is switched on using the remote control.

Prof Ray says the entire procedure will soon be available for today’s NHS patients for a fraction of the original price – just £12,000.

For Linda Oxley, one of the first in the UK to have the Carina implant, the revolutionary hearing aid has changed her life.

‘An infection in my left ear took away most of the hearing on that side so I relied on my right,’ says the 67-year-old from Scunthorpe, Lincolnshire. ‘As I got older, the hearing in my right ear deteriorated with ageing.

‘I couldn’t hear oncoming traffic when driving and it also began to affect my balance. It became a life-threatening problem.’

When traditional hearing aids failed, Linda was referred to Prof Ray. She said: ‘As soon as the implant was switched on, I could tell the difference.

‘I could hear traffic, could hear people whistling, dogs barking, even hear the owl at night. I can go out and speak to people. I get choked up when I think about it – let’s just say cornflakes and crisps are a new experience.’

Linda also has to grapple with the less pleasant sounds that life has to offer. She joked: ‘I can now hear my husband snoring, so sometimes, I do turn it off in bed!’