Hide behind the zebra-print sofa… TV’s Changing Rooms is back!

Sixteen years after Changing Rooms ended, one of the hundreds of home makeovers we did still makes me wince with embarrassment.

Two women who lived next door to each other in the north of England had been friends for 20 years. I was to redecorate one of their bedrooms, and her friend had briefed me: ‘Boudoir, roses, pink.’

I ran with that theme, making everything in the room of her modern, semi-detached maisonette exceptionally pink and rosy. Strangest of all, I put underwear in frames on the wall. Looking back, it sounds awful, but I meant it to be arty.

Well, the homeowner certainly didn’t find it arty — she thought it looked ‘like a brothel’. Luckily, she didn’t burst into tears — that didn’t happen very often on this pioneering and wildly popular show, a staple of prime-time on BBC One and attracting audiences of 14 million viewers.

Instead, when she saw it for the first time, she was totally silent. Normally the producers never called ‘cut’, preferring to let the cameras run, but her complete shock and speechlessness went on for so long that finally someone had to.

In fact, she was so angry, she refused to speak to her friend again. I hope they were eventually reconciled once the underwear had been taken off the wall and put back in the chest of drawers.

If the rumours are true, and Channel 4 really is hoping to bring back Changing Rooms for the 2020s, it would be fantastic. I adored the eight years I spent on the programme, even though some of the disasters still make me cringe.

Over 165 episodes, each including two home makeovers and all made on a shoestring budget, we designers were never going to get everything right. Many of the people whose rooms we changed loved the results — but a few howlers do stick in the mind. 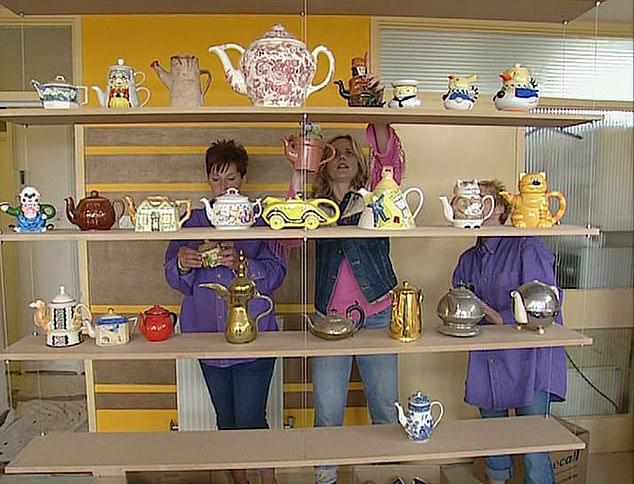 STORM IN A TEAPOT COLLECTION: In one of Changing Rooms’ most memorable mishaps, an unusual set of floating shelves was installed to house the owner’s treasured collection of china teapots at their home in Wandsworth, South-West London 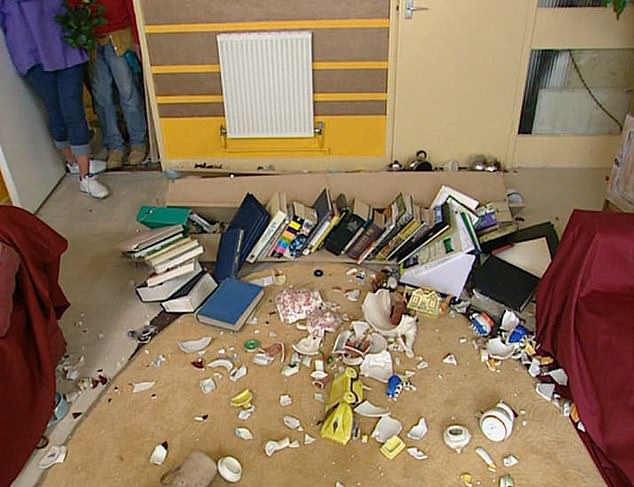 STORM IN A TEAPOT COLLECTION: But the shelves collapsed and the teapots were smashed beyond repair. Designer Linda Barker said: ‘Oh my God, I am really sorry I put you under this stress’, and the owners exclaimed: ‘That’s all our teapots… I’m crying now’

In a tiny London flat, two female neighbours made over a room for their male friend. They hated everything I suggested to them. I hung a sculpture made from polystyrene balls on the ceiling, and went for an all-white colour scheme.

I thought it was cool and minimalist: they loathed it. Before long, they wouldn’t even speak to me, and we were all cooped up in this tiny property — it was so awkward! Finally, they downed tools and quit.

The producers did manage to persuade them to come back and finish the room, but it was a very uncomfortable moment. I wondered if they had ever seen the show — we were designers and our job was to avoid boring beige. We had to be original.

On Changing Rooms, sometimes the ideas worked, sometimes they didn’t, which was part of the fun. Designer Gordon Whistance once tried to turn a lampstand into a tree by covering it in squirty foam that would set and harden.

But it didn’t work: the foam sank to a big puddle on the floor. Not that the disasters ever mattered: the show was so successful, it sold around the world, from Germany to Australia. 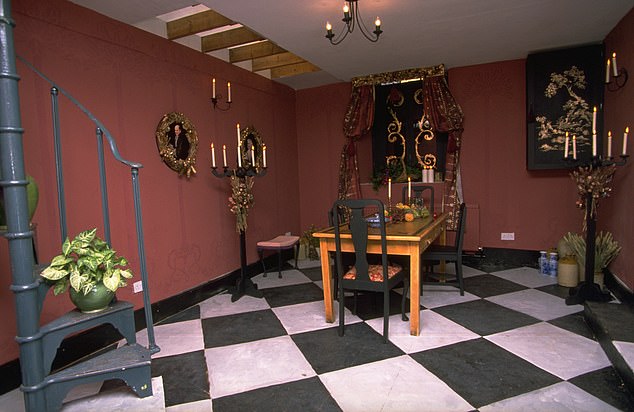 LAURENCE RUINED OUR HOUSE! Susan Dukes hated her Changing Rooms makeover by Laurence Llewelyn-Bowen so much that she burst into tears. It wasn’t just the red walls, the chequerboard floor or the spray-painted flowers in the dining room of her home in North Cave, Yorkshire, that offended. There was also the matter of the outrageous painting in which she resembled a bosomy Nell Gwyn, mistress of Charles II (credit: Radio Times) 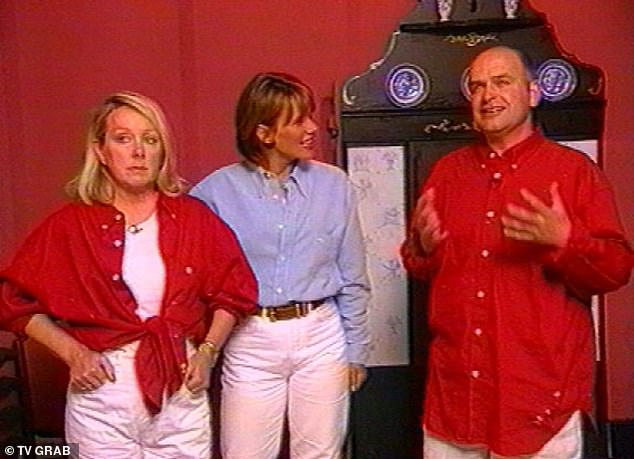 LAURENCE RUINED OUR HOUSE! Susan (pictured with Carol Smillie) later told the Mail: ‘Russell, my husband, was quite offended because it made him look silly. I looked like a wench … I invited them into my home, my inner sanctum, and gave them a free hand. It was insulting’

For those who were hiding behind the sofa back then, it was the most absurd format.

Two sets of neighbours, who were supposed to be great friends, swapped houses and trusted each other to makeover a room in their respective homes, helped by one of us designers. The main designers were Linda Barker, Laurence LlewelynBowen, Graham Wynne and later Gordon and me.

We all had just two days to complete the makeover, with a budget of just £500 and the neighbours who had briefed us working beside us.

Poor ‘Handy Andy’ Kane ricocheted between the two houses, drill in hand, overworked and sometimes grumpy, while presenter Carol Smillie would help out with sewing and painting.

It was exhausting, but exhilarating. Audiences never believed it was all done in two days, or that the designers really did the work, but we did — and it was often hard. 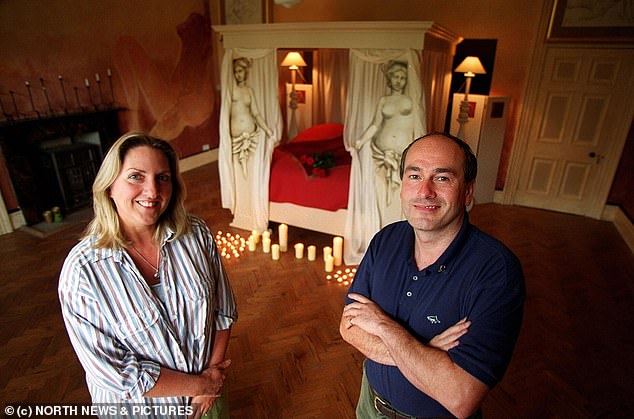 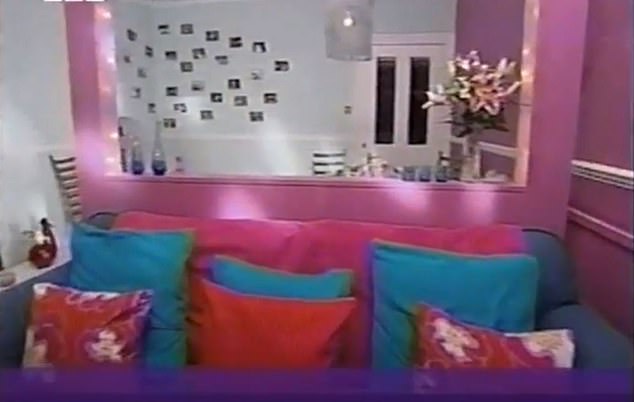 PINK DISCO IN THE LIVING ROOM: Kate and Lindsay asked for something different for their house in Putney, South-West London, but some suggested this wild living room makeover looked more like a school art project. Designer Oliver Heath said of the room: ‘It’s good to be a bit different … it’s exciting and decadent and vibrant’, but owner Lindsay was not pleased, asking: ‘What have they done? Have you seen the fluffy bits on the ceiling?’ Kate luckily saw the funny side, though, adding: ‘It has good comedy value’

We did a lot of rag-rolling — I don’t know why we ever thought it looked good — which was very tough on the arms. By the end of the day, we’d be covered in paint, with broken nails and sore knees.

Since each set of neighbours slept at the other’s houses and weren’t allowed home to have a peep at their room, it was always a huge shock when they were brought in for the ‘reveal’.

The designers were never there at that moment, which was a blessing — the last thing you want is for someone to hate a design you’d put your heart and soul into. To be honest, true disasters were rare: many more people were thrilled. 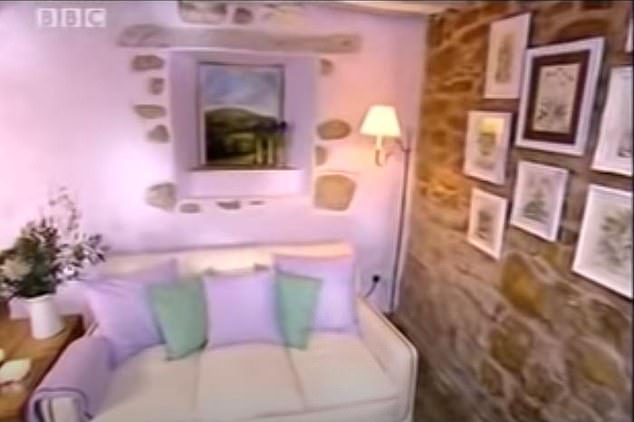 LAVENDER WALLS – YUK! Pat and Jenny’s rustic cottage in Bodmin, Cornwall, with naked stone and bare beams was radically altered, with lavender paint and matching upholstery. Laurence described it as like ‘a wine bar in Provence’. Jenny said: ‘I love the colour, that’s fab!’, but Pat was less sure: ‘The old stomach’s going something awful. I don’t know what to say, really’ 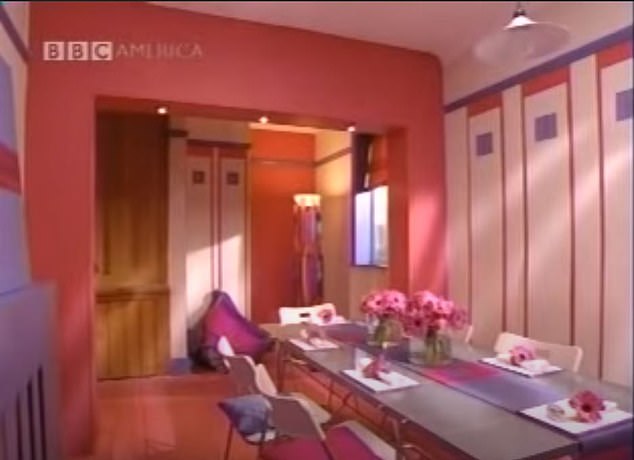 AS GARISH AS IT GETS: This statement dining-room makeover left even the presenters shocked. Contestants Jenny and John wanted their dark and slightly dingy dining room to be brightened up, but insisted on nothing ‘too garish’. Bright purple and pink it was, then! Presenter Carol Smillie said: ‘It’s quite an emotive colour,’ and Jenny and John added: ‘It’s wild! Flipping heck … I don’t hate it’

In Birmingham, I did a makeover for a lovely couple who were into King Arthur and dressing up as knights and maidens.

Encouraged by their neighbours, I turned their dining room into a lavish Arthurian hall with a round table. It was completely over the top, and a bit tacky in hindsight, but they thought it was fabulous.

They used to charge people to come and look at it, for charity. That was the spirit of Changing Rooms — it brought joy and inspiration.

Nowadays, everyone’s house looks the same, full of white, grey and beige. It’s so boring! The time is ripe for Changing Rooms to return.

We can afford to be creative again — even, dare I say it, a bit wacky. These days, I own a zoo — I heard one was for sale, and thought my children would have a fabulous upbringing surrounded by animals.

It’s been hard work, but an amazing experience. But I have such fond memories of Changing Rooms that if they asked me to go back, I’d be there like a shot. I promise to leave the undies in the cupboard this time.