In the highly structured hyena society, when the higher-ranking mothers have children, they pass on social networks to their daughters, according to a new study.

They live in groups that can grow to more than 100, but within their clans there is an order, and the females are in charge, say University of Pennsylvania biologists.

Earlier studies have looked at the social structure of hyenas and other animals, but this new work analysed 27 years of detailed observations of hyena behaviour.

Their findings show that, much like in human society the ‘well-to-do’ pass on useful connections to their children, the same happens in hyena society.

Those of a higher-rank are more likely to pass on friends, acquaintances and other useful connections than those lower down the clan’s social ladder.

‘That is kind of intuitive because things like that happen in human society as well,’ the authors explained, adding that people often inherit their connections.

Daughters of the hyena elite also lived longer, likely due to being ‘cared for’ over a longer period of time by a more close network of friends and family.

In the highly structured hyena society, when the higher-ranking mothers have children, they pass on social networks to their daughters, according to a new study 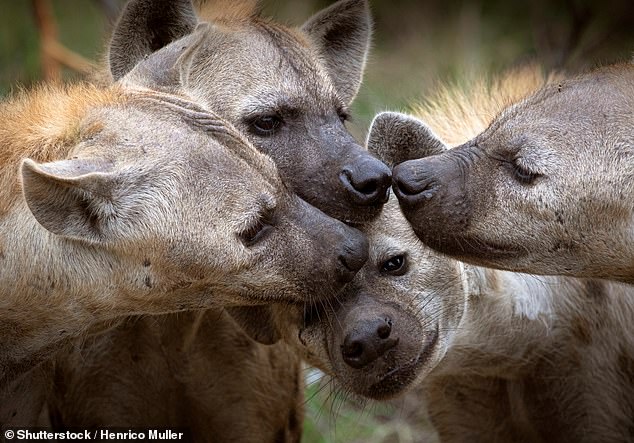 They live in groups that can grow to more than 100, but within their clans there is an order, and the females are in charge, say University of Pennsylvania biologists

In spotted hyena societies, inherited social networks – passed from mothers to offspring – are essential to hyena life and survival, according to a new study.

While the structure of animal social networks plays an important role in all social processes as well as health, survival and reproductive success, the general mechanisms that determine social structure in the wild remain unknown.

One proposed model, termed social inheritance, suggests that an offspring’s social affiliations tend to resemble those of their parents, particularly those of the mother.

Previous research has indicated that these inherited social networks may influence social structure across generations in multiple species.

The new study found that the social relationships of juvenile hyenas are similar to those of their mothers and that the degree of similarity increases with the mother’s social rank.

What’s more, the results show that the strength of the maternal relationship affects social inheritance and is also positively correlated with the long-term survival for both mother and offspring.

The findings suggest that selection for social inheritance might play an essential role in shaping hyena social behaviour and the fitness of individual hyenas.

It was already known that rank was inherited from the mother, but the new study found affiliative, friendly interactions were also passed from mother to daughter.

They built on a theoretical model of ‘social network inheritance’ developed by the same team in 2016, which suggests animals establish their networks through a process of ‘social inheritance’ or by copying their mother’s behaviours.

The model fit well with snapshots of real-world social networks from not only hyenas but also three other social species: bottle-nosed dolphins, rock hyrax, and lizards.

In the new work, the team aimed to refine their model to better understand the intricacies of social inheritance in hyenas.

‘We knew that the social structure of hyenas is based in part on one’s rank in the agonistic hierarchy, which we know is inherited from mothers’ says Erol Akçay, a study coauthor and associate professor in Penn’s School of Arts & Sciences.

‘But what we found, that affiliative, or friendly interactions, are also inherited, hadn’t been shown.’

‘This is a very simple process of social inheritance that we show works very, very well,’ says Amiyaal Ilany, a senior lecturer at Israel’s Bar-Ilan University.

‘Individuals that were born to higher rank are more accurate in their inheritance, and they have good reason to do so.

‘It fits well with what is already known about inheritance of rank. There are very strict rules about what place you sit in the hierarchy if you are a hyena.’

‘We realised we could use that dataset to directly test our model, to see if social ties are inherited or not,’ Akçay said.

Field biologists from Michigan State University had meticulously tracked how hyenas in a clan interacted, including who spent time with whom as well as the social rank of each member.

To do so they spent months getting to know each member of the clan by sight, tracking tens of thousands of interactions.

These observations allowed the team to map out hyenas’ social networks based on which individuals spent time close together.

‘This use of proximity to track social networks isn’t possible with humans, as two strangers might randomly get into an elevator together,’ Ilany explained.

‘But with hyenas, if one individual gets within a few meters of another, that suggests that they have a social connection.’

With this picture of each individual’s social affiliations in hand, the researchers compared the social networks of mothers to their offspring.

Hyena cubs stick close to their mothers for the first couple years of life, so the networks of mothers and their offsprings were quite similar to start. 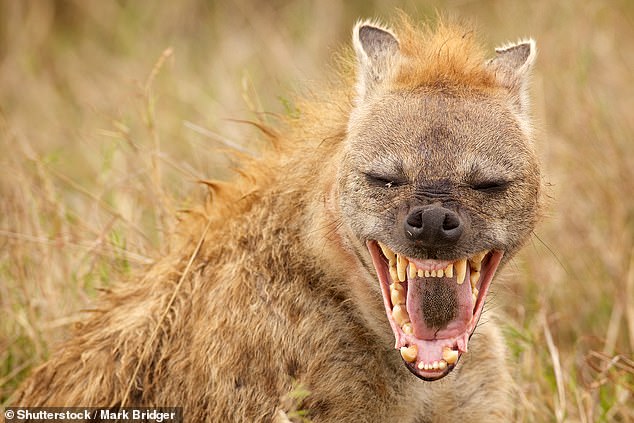 Earlier studies have looked at the social structure of hyenas and other animals, but this new work analysed 27 years of detailed observations of hyena behaviour

However, the researchers noticed that even as the young stopped spending so much time in close proximity to their mothers they still sustained quite similar networks, particularly for female offspring, who generally remain members of the clan for life.

This close similarity between networks of mother and offspring remained, in some cases, for as long as six years.

‘You may not be seeing your mother as often, or she even may have died, but you still have similar friends,’ the authors explained.

This pattern was especially strong for the higher-ranking mothers, for whom social inheritance was the strongest in the group.

Offspring of lower-ranking mothers were less likely to reproduce their mother’s social networks, perhaps trying to compensate for their more lowly origins by associating with a greater variety of individuals.

There was no genetic inheritance of rank or close associates, said zoologist Kay Holekamp of Michigan State University, who led the data gathering. 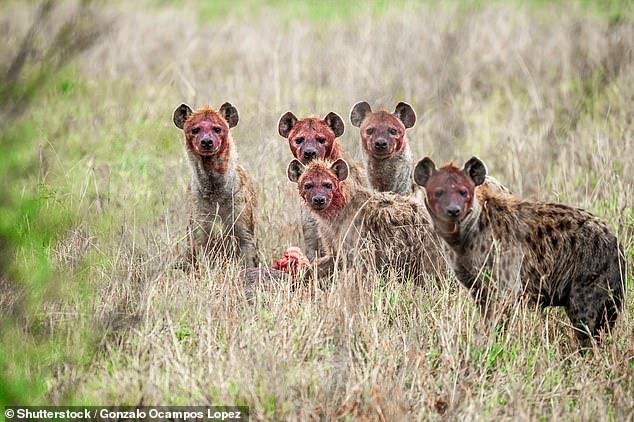 Those of a higher-rank are more likely to pass on friends, acquaintances and other useful connections than those lower down the clan’s social ladder

One of the most remarkable things about the phenomenon documented here is that the youngsters’ relationships with their mothers’ close associates are all learned very early in life, Holekamp said, rather than an inherited behaviour.

‘Rank is super important,’ says Akçay. ‘If you’re born to a lower-ranked mother, you are less likely to survive and to reproduce.’

They said social network inheritance likely contributes to a group’s stability and also has implications for how behaviours are learned and spread through groups.

The study also underscores how factors other than genetics hold sway in key evolutionary outcomes, including reproductive success and overall survival.

‘A lot of things that are considered by default to be genetically determined may depend on environmental and social processes,’ says Ilany.

The team reported their findings in the journal Science.

AS THE SPOTTED HYENA RETURNS TO GABON: WHAT IS IT, AND IS IT IN DANGER? 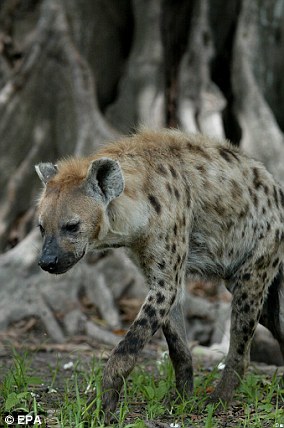 The spotted hyena can be found throughout sub-Sahararn Africa.

The species, also known as the laughing hyena, is listed as being of least concern by the International Union for Conservation of Nature – but, poaching and habitat loss have begun to bring on dramatic population decline.

Spotted hyenas are said to be the most common large carnivore in Africa, though it’s thought they may have originated in Asia and even ranged through Europe until the Late Pleistocene.

In Gabon’s Bateke Plateau National Park, where spotted hyenas and other wildlife were once common, decades of poaching have since rendered them locally extinct.

Now, one of the creatures has been spotted for the first time in 20 years.