A high school valedictorian paid tribute to her migrant parents in her graduation speech this weekend, thanking them for working tirelessly by picking strawberries in fields while they raised her.

Brenda Alvarez-Lagunas, 18, took the podium at Mulberry High School in Mulberry, Florida on Saturday, bringing a basket of strawberries up on stage with her.

She went on to explain why the fruit has special significance for her, detailing the hard, back-breaking work her parents did to support her and her sister after they emigrated to the US from Mexico with a fourth grade education.

Working hard: Brenda Alvarez-Lagunas, 18, graduated from Mulberry High School in Mulberry, Florida, at the top of her class

At the beginning of her eight-minute speech, she asked fellow classmates and family members, ‘Care for some strawberries?’

The student then jokingly acknowledged there were probably not enough strawberries for everyone, before saying, ‘These are no ordinary strawberries, they’re jewels.’

Brenda then picked up individual pieces of fruit to reference what each one symbolized for  her.

She explained that her parents migrated to the US with just a fourth grade education to provide for their three children.

They spent days in the fields picking strawberries, cucumbers and sweet potatoes in the Florida heat. 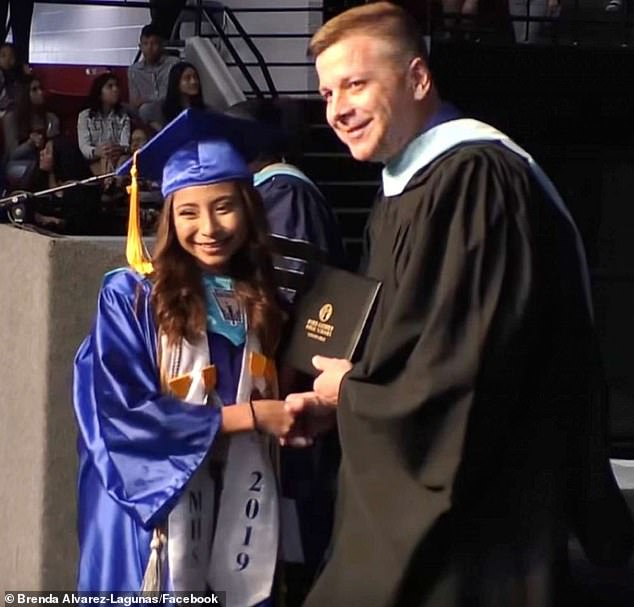 Incredible: She graduated with a 4.68 GPA and will attend Stanford University in California in the fall to study biomedical engineering 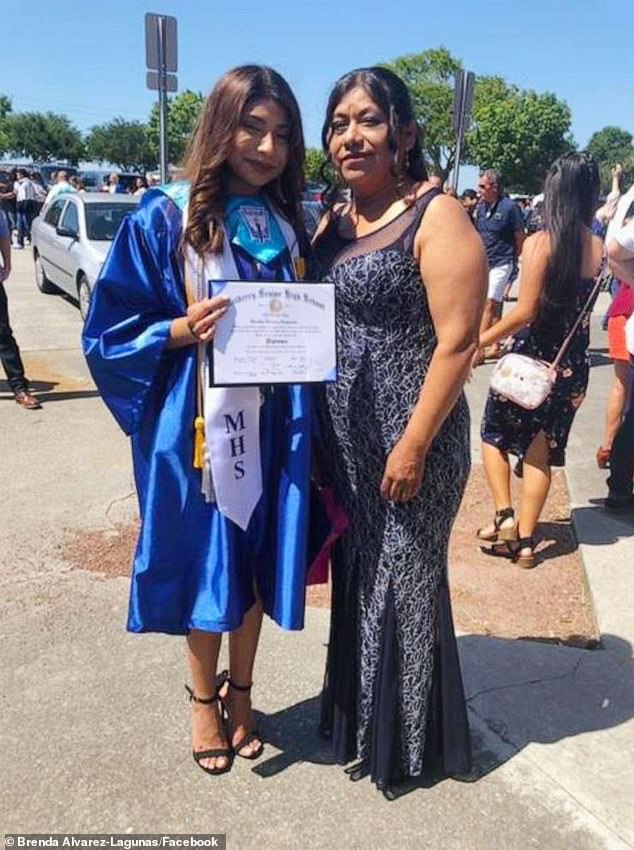 Motivator: The student, pictured with her mother, gave a now-viral graduation speech honoring her migrant parents and used strawberries to detail her points

‘Yes, my motivation has been rooted in my migrant culture,’ she said during her emotional speech, which reportedly brought tears to people’s eyes in the audience.

‘I am a daughter of two farm workers who have worked tirelessly from sun up to sundown,’ she went on.

‘As a young child, I remember being in the fields and watching my parents glazed in sweat, and their clothes dripping wet as if it just rained on them. 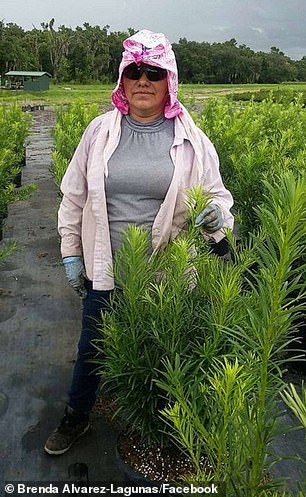 Supportive: Her parents worked in fields picking strawberries and cucumbers to support the family after migrating from Mexico

‘Despite the beaming sun, and the body aches and pains, their smiles shone with every bucket of produce they carried,’ Brenda said.

‘I remember picking crops with them after school or on the weekends. And even I, a young, energetic youth, could not always handle the aches and pains of bending over, or the intense heat that embraced us.

‘The moments I remember spending together as a family are stretched thin. As much as my parents wanted to provide their children with attention and care, they could not, simply because they spent their lives in the fields.

‘I was often left in the care of my older sister, and when the family welcomed two new siblings, the caretaker role became mine.

‘My siblings and I did not have the materialistic things that other children had. And we still don’t. But what I gained was far more valuable.

‘Instead, my parents gave special gifts. The gift of a strong work ethic. The gift of resilience. And the will to succeed.’

She said they would frequently tell her in Spanish, ‘Your only way out of this lifestyle is through an education.’

Life was made more difficult for the family after Brenda’s father was deported back to Mexico when she was in 7th grade, making her mother the sole provider.

Her family was soon drowning in debt, shrinking her possibility of affording a secondary education. 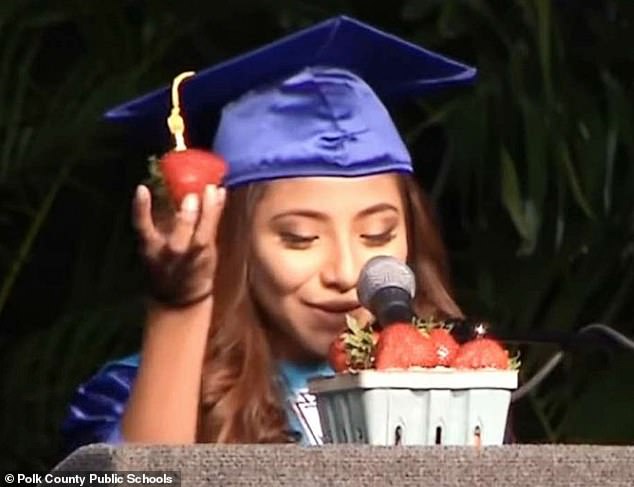 Emotional tribute: Brenda credited her success and motivation to her parents working hard in her valedictorian speech 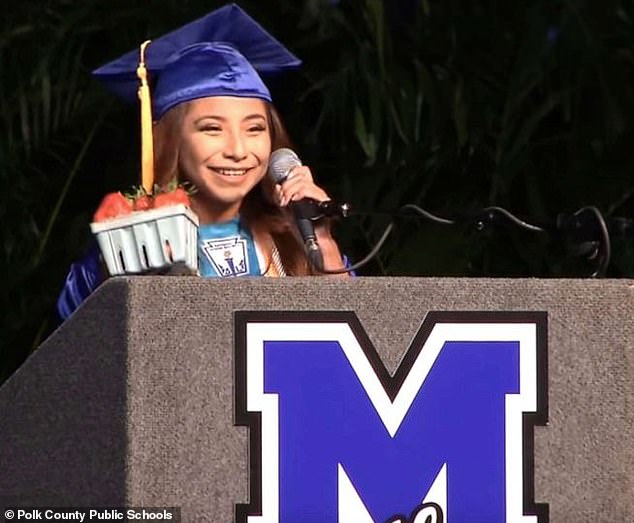 Proud: ‘Oftentimes, students like me, they’re ashamed of their backgrounds,’ she said. ‘And, I wanted to change that. They shouldn’t’

But Brenda didn’t let setbacks stop her from accomplishing her goals and becoming the top student in her graduating class, with a 4.68 GPA.

‘Current statistics say that I should not make it. I am from a single-parent household, and will be the first in my family to graduate from high school,’ she said, explaining that her older sister got pregnant and dropped out.

‘I have seen firsthand the challenges of not having an education, which is why I use all of these adversities as motivation for myself,’ she said.

‘I share this with you in the hopes that you realize that no matter what stereotypes or statistics are placed on you, you can overcome them.’

She went on to offer motivational words to her classmates, and single out her mother in the audience with a touching message in Spanish, telling her that her sacrifices were not made in vain. Important: Brenda used strawberries in her speech to explain what they meant to her and why she thought of the fruit as her ‘jewels’ 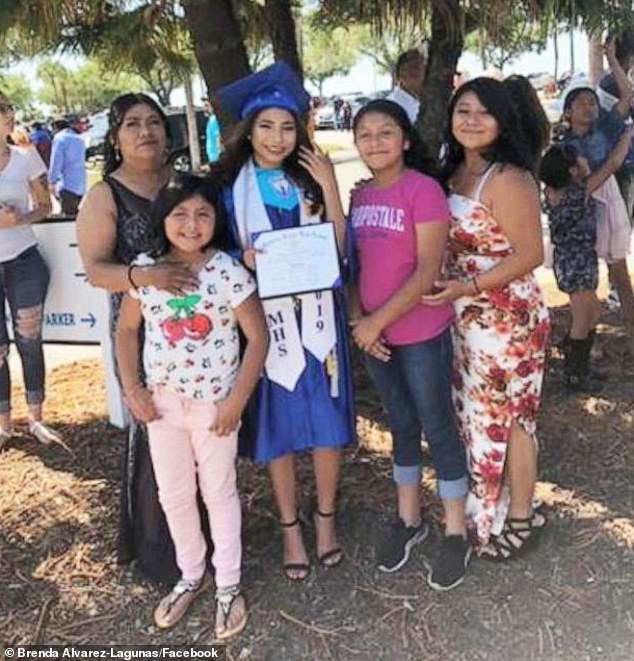 Family: Life became more difficult for Brenda’s family (pictured) after her father was deported back to Mexico. But she was still able to stay focused in school and accomplish her goals

When speaking to News Channel 8, Brenda revealed why she wanted to give a speech referencing her migrant background to her graduating class.

‘Oftentimes, students like me, they’re ashamed of their backgrounds,’ she told the news organization. ‘And, I wanted to change that. They shouldn’t. Their upbringing made them who they are.’

Her valedictorian speech has since gone viral, with thousands of views online.

Despite the popularity of her story, Brenda confessed she wrote the speech for a larger purpose instead of just detailing her own life.

‘When I was writing the speech, I know the purpose was to get representation to those who feel under-represented. It was never about me,’ she said.

Brenda intends to attend Stanford University in California in the fall to study biomedical engineering.