Hilarie Burton, Bethany Joy Lenz, and Sophia Bush had a reunion of sorts when they attended the 2022 iHeartRadio Music Festival at T-Mobile Arena in Las Vegas, Nevada, over the weekend.

The One Tree Hill stars, who have remained close friends since the drama series ended in 2012, got to take the stage and introduce the 1980’s rocker icon Pat Benatar and her husband and collaborator Neil Giraldo.

The three ladies have since taken to their respective Instagram pages to gush over their weekend in Sin City, especially their time hanging out with the Hit Me With Your Best Shot star.

Reunited! One Tree Hill alum Hilarie Burton, Bethany Joy Lenz, and Sophia Bush teamed up to serve as presenters at day one of the 2022 iHeartRadio Music Festival at T-Mobile Arena in Las Vegas, Nevada on Friday

The trio, who host the Drama Queens podcast, which is an iHeart Productions, would first hit the red carpet ahead of the day one of the festival.

The ladies struck poses both individually and then as a united tandem, where they showed off their undeniable chemistry.

Lenz, who played Haley James Scott on One Tree Hill, stood in the middle of her two gal pals in a metallic gold minidress with a large bow adorned on the left side.

For an added touch of sexy style, the actress, 41, donned fishnet stockings to go with her black platform heels.

Her look was rounded out by having her blonde tresses styled at shoulder length with added volume and a part in the middle.

Golden touch: Lenz, 41, showed off her fab figure in a metallic gold minidress with a large bow adorned on the left side with black platform heels

Burton, who played Peyton Sawyer on the series, opted to go with a black and red sparkling suit that consisted of pants that hugged her hips while flaring out from the knees down.

The matching top was left unbuttoned just enough to give a hint of her cleavage.

The 50-year-old Sterling, Virginia, native also went with platform heels and had her long locks pulled back off her face, with the exception of some strands she left falling over her left eye. 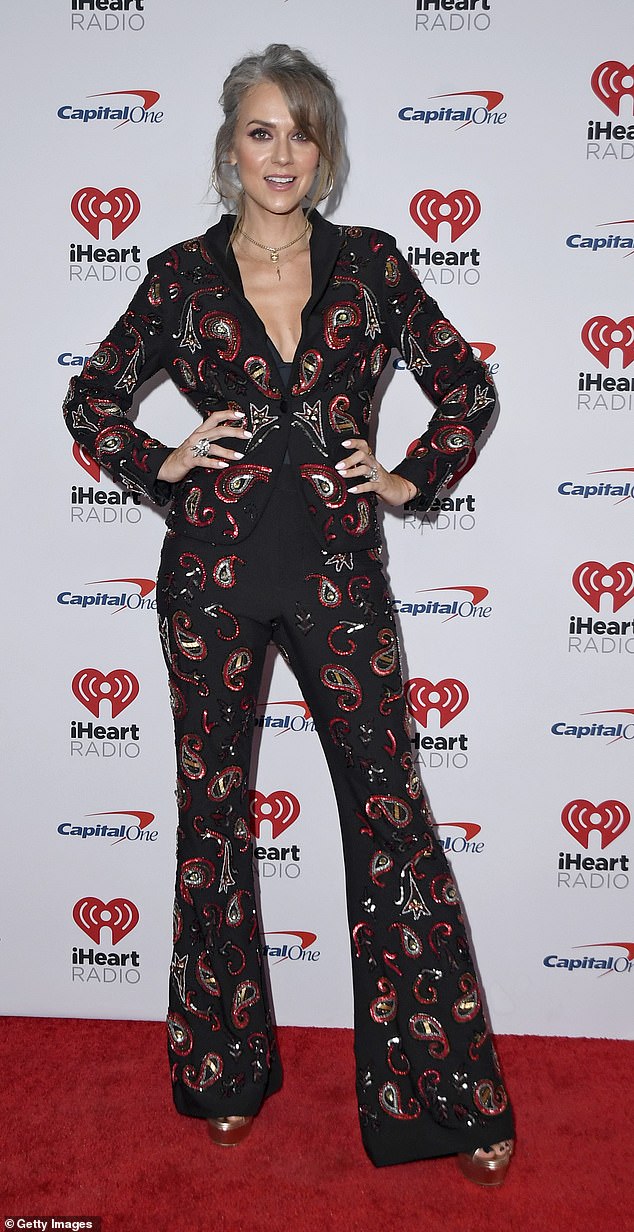 Unique: Burton, 40, opted to go with a black and red sparkling suit that consisted of pants that hugged her hips while flaring out from the knees down and gold platform heels

Bush, who portrayed Brooke Davis, went with a mix of cool elegance in a black pinstripe suit with slacks that hugged her curves all the way down to her ankles.

The Pasadena native got daring and wore only a black bra-like top underneath her her blazer.

She also donned a pair of gold heels and had her raven tress styled long, straight and sleek with a part on the slight left.

Chic: Bush, 40, went with a mix of cool elegance in a black pinstripe suit, consisting of slacks that hugged her curves all the way down to her ankles and gold heels 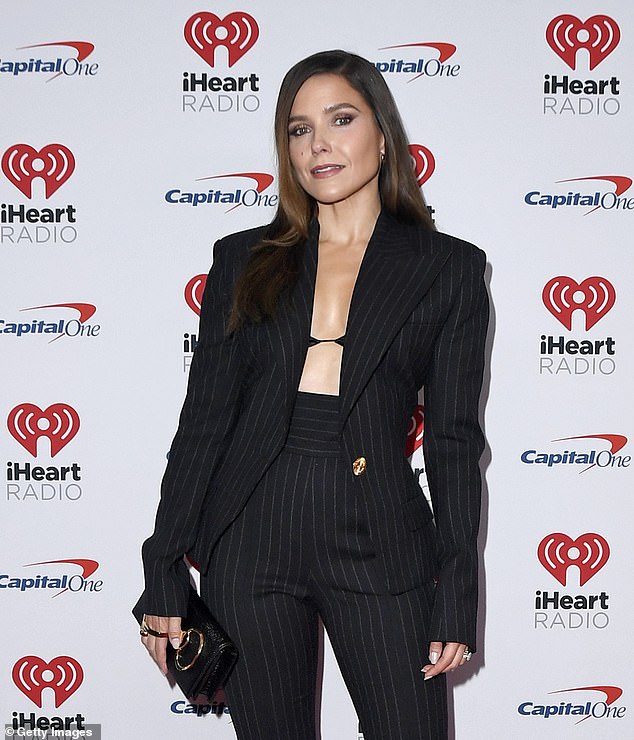 Revealing: Bush only wore a bra-like top underneath her blazer 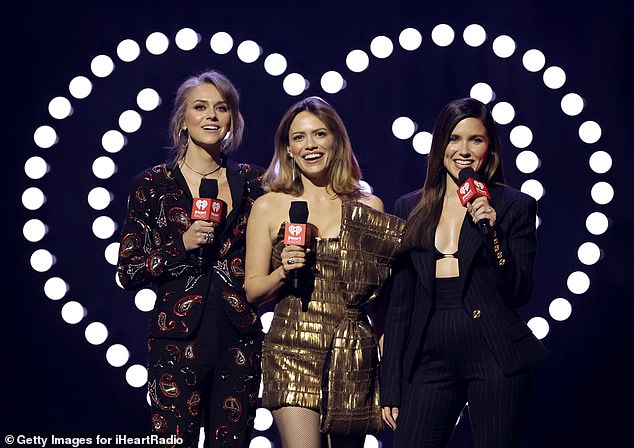 Dream gig: The ladies would eventually hit the stage on day one of the festival and introduce legendary rockers Pat Benatar and her husband and collaborator Neil Giraldo

All three ladies would share their gratitude for being included in to the musical event on the Instagram pages.

‘VIVA LAS VEGAS Ladies! Thank you @iheartradio for giving your #dramaqueens the coolest opportunity! Y’all we introduced Neil Giraldo and #PATBENETAR last night at the #iheartfestival and it was siiiiick. Thank you to all our fans who keep showing up for us every week. We love YOU!!!’ Lenz wrote in the caption of a series of snaps taken during the weekend. 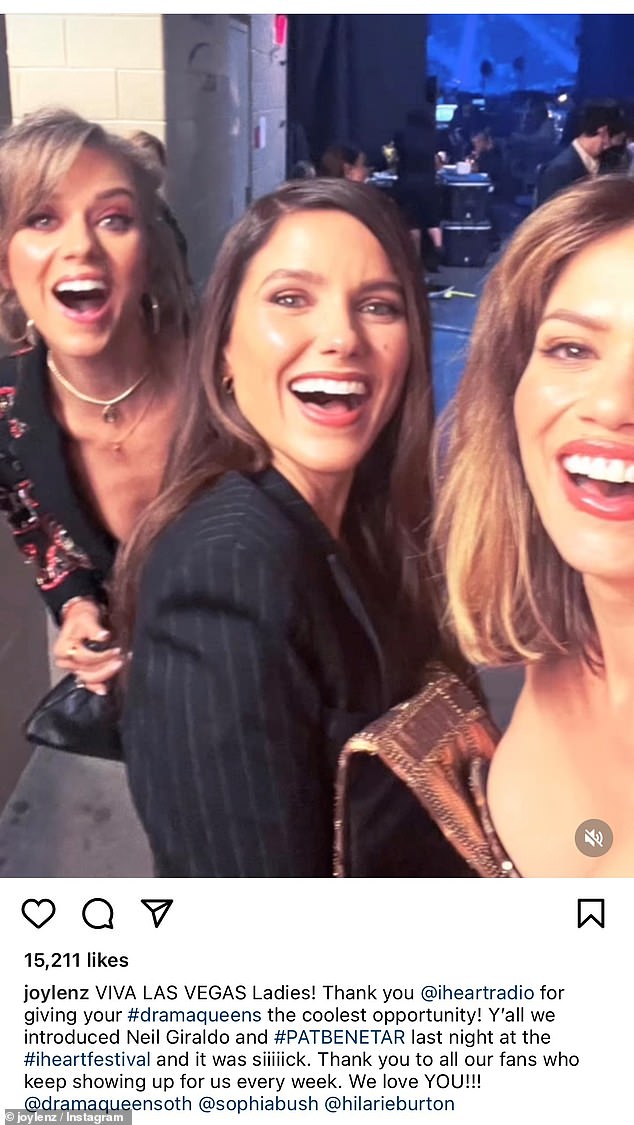 Giving thanks: Lenz thanked iHearRadio for adding them to the event so they could hang out with the Hit Me With Your Best Shot stars 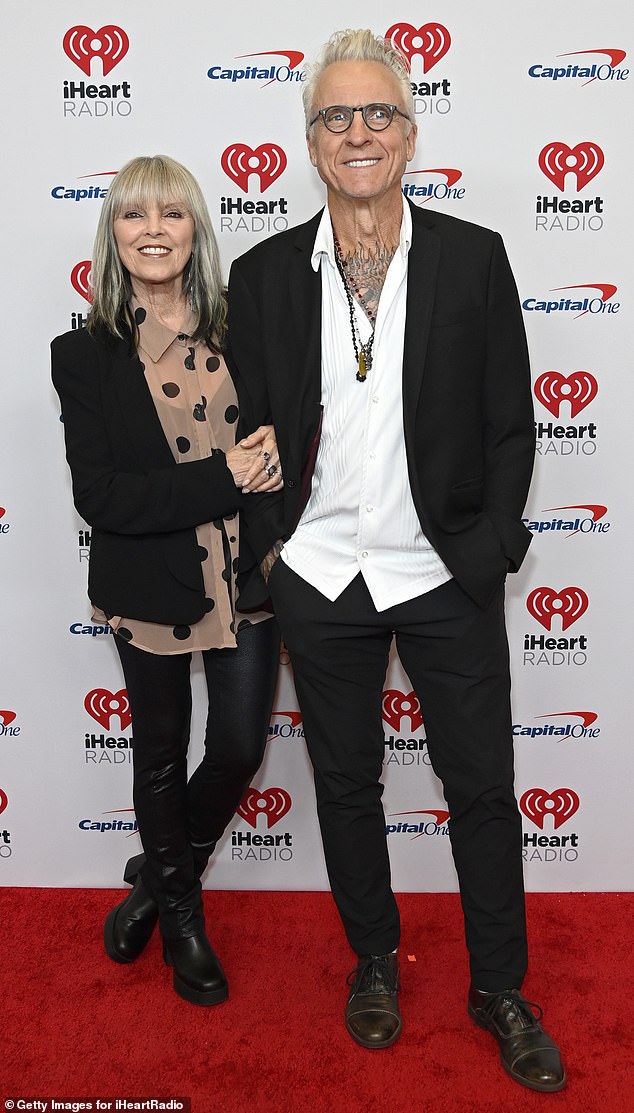 1980s icons: Pat Benatar and Neil Giraldo would eventually take the stage and deliver many of their hits; they couple have been married since 1982 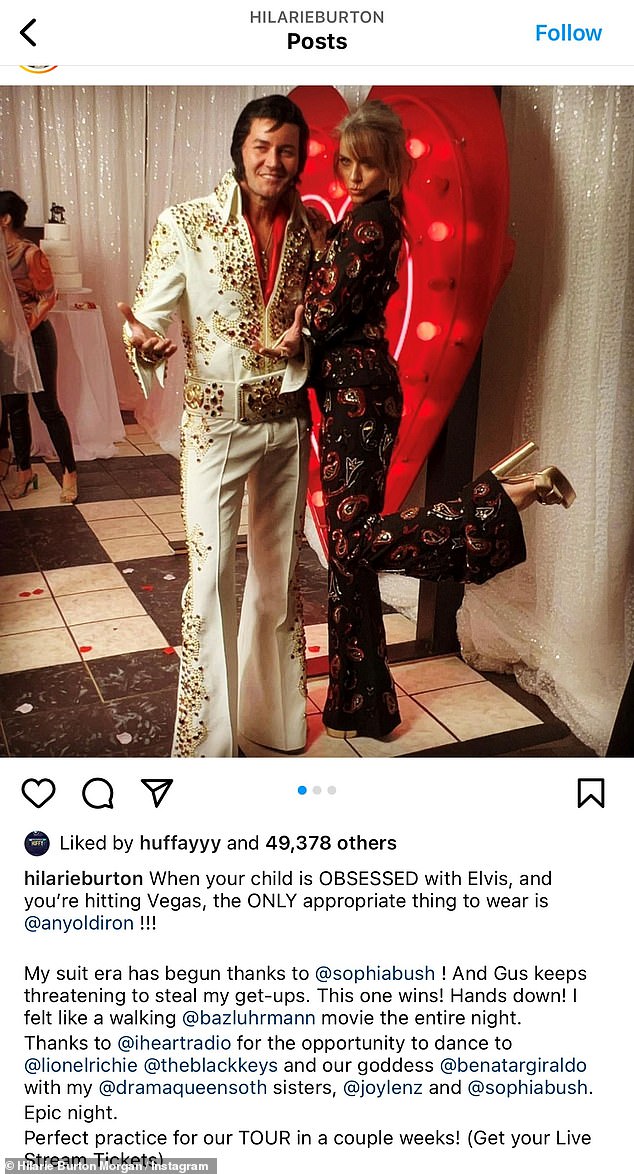 One Queen with the King: Burton shared some images of herself with an Elvis impersonator

Burton would also post a photo of herself standing next to an Elvis impersonator.

‘When your child is OBSESSED with Elvis, and you’re hitting Vegas, the ONLY appropriate thing to wear is @anyoldiron !!!’ she began, adding, ‘My suit era has begun thanks to @sophiabush! And Gus keeps threatening to steal my get-ups. This one wins! Hands down! I felt like a walking @bazluhrmann movie the entire night.’

The actress continued: ‘Thanks to @iheartradio for the opportunity to dance to @lionelrichie @theblackkeys and our goddess @benatargiraldo with my @dramaqueensoth sisters, @joylenz and @sophiabush. Epic night.Perfect practice for our TOUR in a couple weeks! (Get your Live Stream Tickets) More pics to come.’

Bush also gushed over being able to introduce Pat Benatar and her husband at the event.

‘What a moment’: Bush shared that she’s still ‘giddy’ over getting to hang with Pat Benatar

‘Queens love icons! It was an absolute dream for us @dramaqueensoth to introduce the legend herself Pat Benatar, and Neil Giraldo @benatargiraldo at the @iheartradio festival in Vegas this weekend. We were positively GIDDY! We may never recover,’ she began.

‘She is everything. They are just unreal together. And their musical history and love story combined!? A rock n’ roll fairy tale that’s just so damn cool. What a moment. This was one we’ll never forget. Thank you to our iHeart family, and all of you who listen to our show. Love love love! ‘ the actress added, along with a red heart emoji.

The festival was broadcast live for fans via iHeartRadio stations throughout the country across more than 150 markets, and on the iHeartRadio app.

The ladies’ Drama Queens podcast, where they discuss all things One Tree Hill, made its premiere in June 2021. 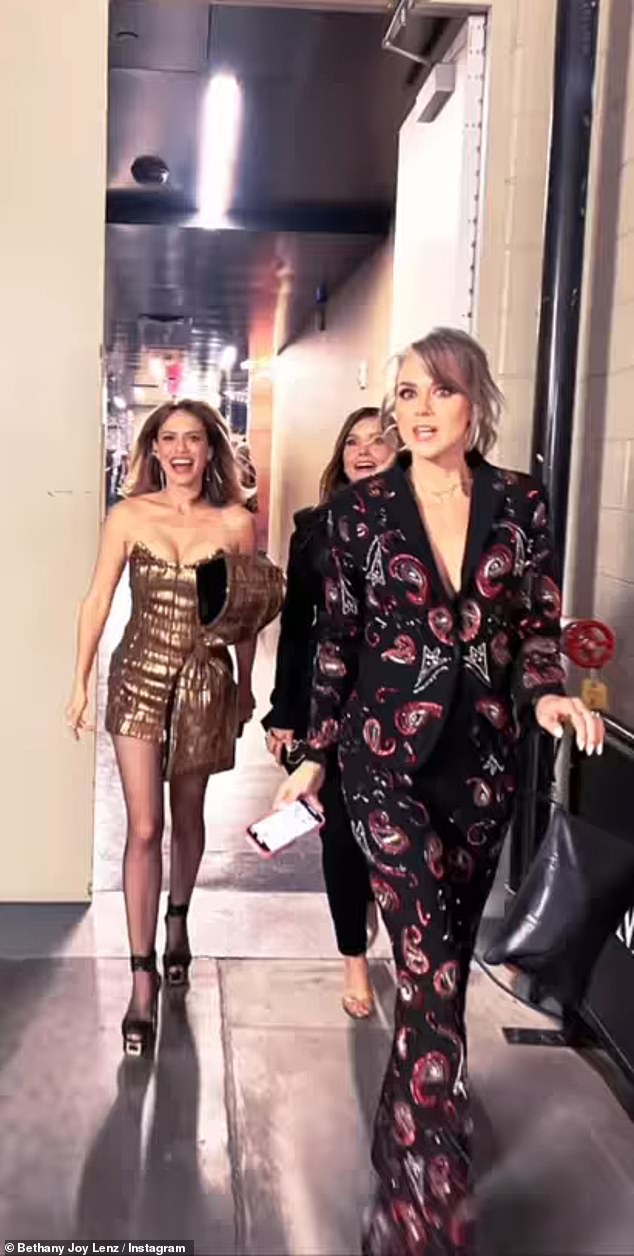 Beaming: The ladies were all smiles as they made their way backstage on day one 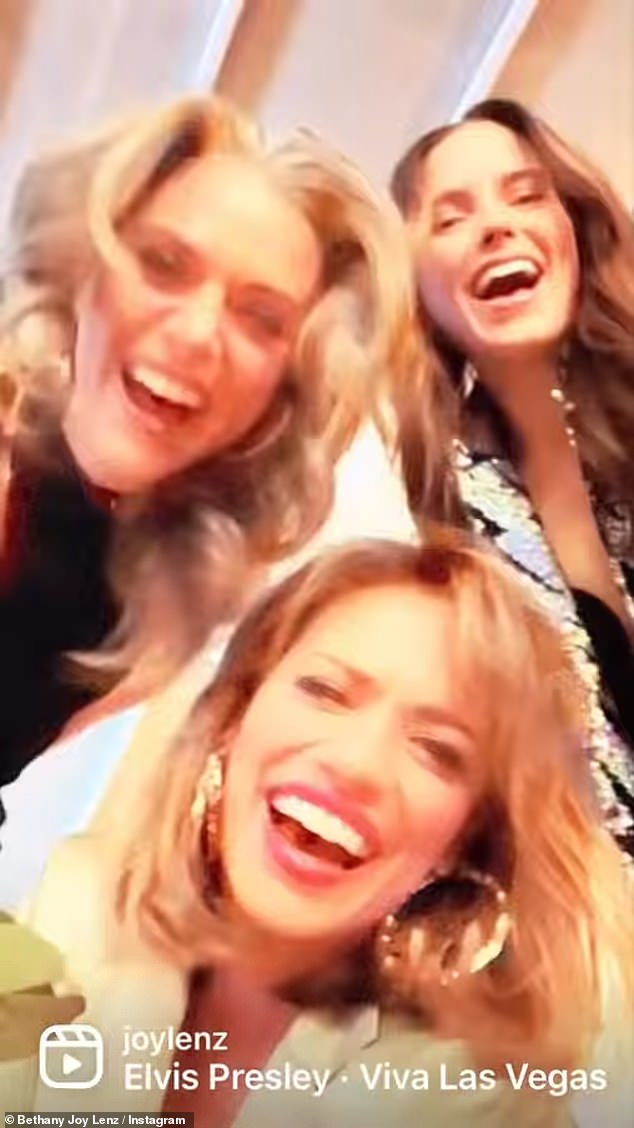 Going off: The festival will be broadcast live for fans via iHeartRadio stations throughout the country across more than 150 markets, and on the iHeartRadio app