An adorable pint-sized pup gets her head stuck in a box of tissues that she is enjoying ripping up, sending her running backwards into a panic.

Winzee, a one-year-old Morkie pup, took on more than she could chew when her head got stuck in a tissue box that she had been playing with.

Attempting to free herself the clueless puppy is filmed walking backwards around the room before she stops to wag her tail at her owner’s voice.

The clip was filmed by her owner Debbie Loden, 54, at her home in Palacios, Texas, U.S, on Thanksgiving day, November 28.

She said: ‘We had company over for Thanksgiving so I didn’t notice that she was attacking the tissues at first.

‘Then I looked over and saw that she had her head stuck in the box, but her tail was still wagging away like crazy.

Winzee, a one-year-old Morkie pup, got her head stuck in a box of tissues after getting carried away ‘playing’ on Thanksgiving Day in Palacios, Texas 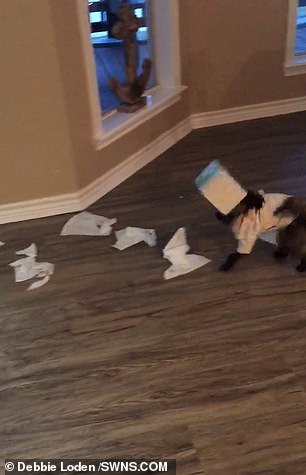 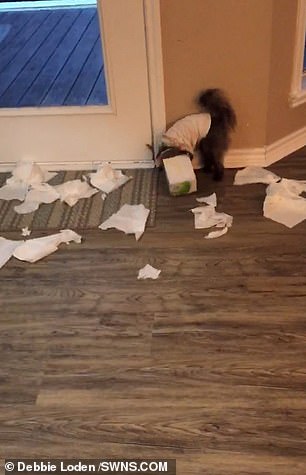 While taking part in her favorite past time, ripping up tissues, the pup found herself suddenly blinkered by the box

‘We thought it was so funny I pulled out my phone and filmed her running around with the box on her head.’

Seeming to accept her new state of blindness after a while the cute pup remains jolly even in her unpleasant predicament.

Mrs Loden, an Outside Sales Manager and her husband Mark Loden, who also works in sales, have had Winzee since she was two months-old. 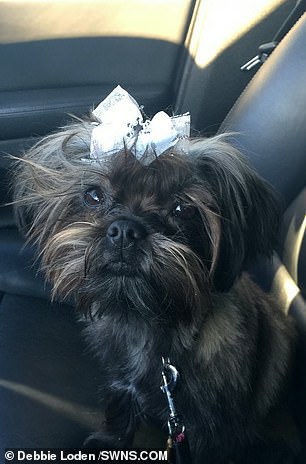 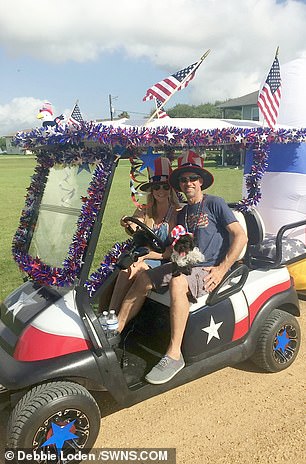 The mischievous pup is a cross between a Yorkshire terrier and a Maltese and has been captured partaking in her favorite tissue-ripping activity on multiple occasions.

‘Normally she’ll just pull every single tissue out of the box and play around in them, if she finds a box of tissues that is her idea of heaven.

‘She absolutely loves it. We find them all over the house and have to make sure she doesn’t eat any of them in her excitement!’