Hillary Clinton refused to openly call out Ivanka Trump’s ‘complicity’ in her father’s administration during a recent interview, despite insisting that ‘everyone’ who stands by President Donald Trump’s policies should be ‘judged’ for their actions.

The former Democratic presidential nominee was speaking with Refinery29 when she was asked directly if she feels that the first daughter is complicit in the Trump administration’s actions — and whether she believes members of the public should be sympathetic to her.

However, despite the direct line of questioning, Hillary shied away from offering her direct thoughts on Ivanka’s role within her father’s White House, instead insisting that ‘everyone associated with him’ should be ‘held accountable’ while failing to single out Trump’s eldest daughter.

Not naming names: Hillary Clinton avoided using Ivanka Trump’s name when she as asked if she thought the first daughter is complicit in the Trump administration’s actions 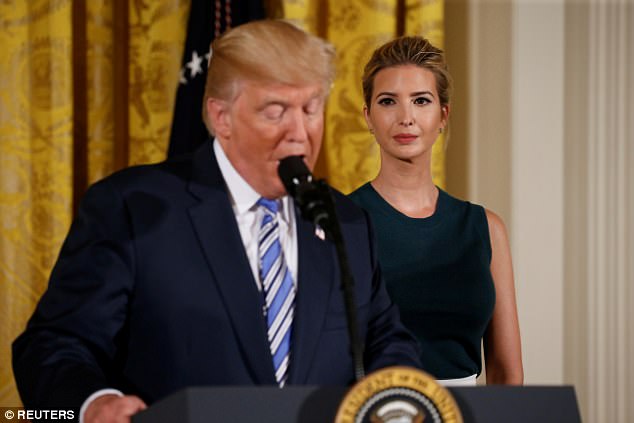 Making her point: ‘Everyone associated with him… They’re either on board with that, or they’re not. And if they’re not, they need to be speaking out or leaving,’ Hillary said

Clinton noted that Trump ‘makes common cause with white supremacists and neo-Nazis and Ku Klux Klanners’ and took away the protections that were granted to 800,000 DREAMers when his administration ended Defense Against Childhood Arrivals (DACA).

Many people who viewed Ivanka as a moderate in the Trump administration have been left disappointed by her silence and her inability to sway her father’s policy decisions.

Although Clinton stressed that the ‘person who has to be held responsible is Donald Trump’, she added that anyone who remains silent about his controversial policies and actions is part of the problem.

‘If they remain silent and just give lip service to contrary points of views, then they are part of his agenda and should be judged and held accountable for that,’ she said. 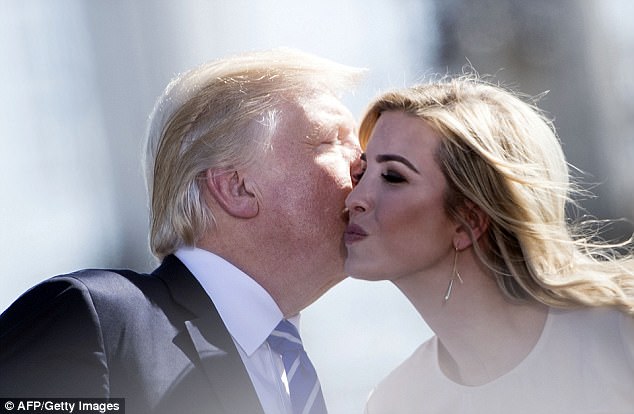 Daddy’s girl: Although she refused to single out Ivanka, Hillary said those who remain silent are part of Trump’s agenda and ‘should be judged and held accountable for that’ 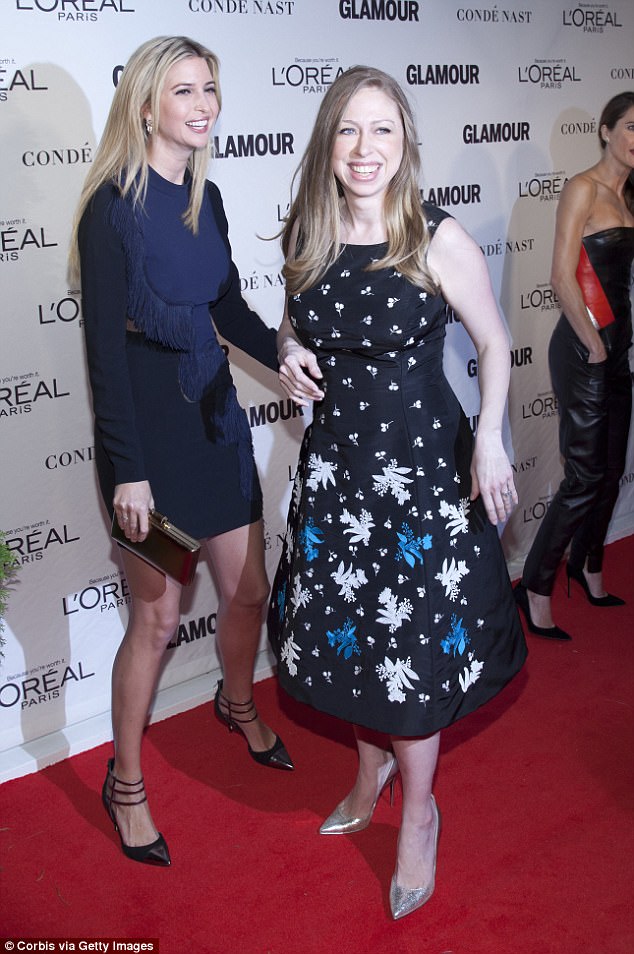 Throwback: Clinton’s daughter, Chelsea Clinton, was close friends with Ivanka before the election, although it is not clear if they are still in touch. They are pictured together in 2014 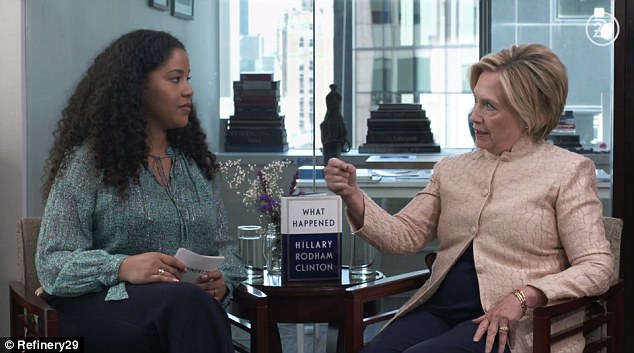 Hard-hitting question: While promoting her new book, What Happened, Clinton was asked if she believes abortion litmus tests are necessary for Democrats

Clinton’s daughter, Chelsea Clinton, was close friends with Ivanka before the election, although it is unclear if they if they are still in touch.

While they had vowed to remain friends regardless of their parents’ politics, Ivanka told 20/20 in January that she hadn’t spoken to Chelsea since her father was named the 45th President of the United States but planned on reaching out.

Clinton speaks candidly about losing the 2016 election in her new memoir, What Happened, and during her interview with Refinery29, she touched upon some of the sentiments that she shared in the book, including her advise that members of the Democratic Party should not support pro-life candidates.

When asked about whether she believes abortion litmus tests are necessary for Democrats, Clinton shied away from giving a firm yes or no answer. 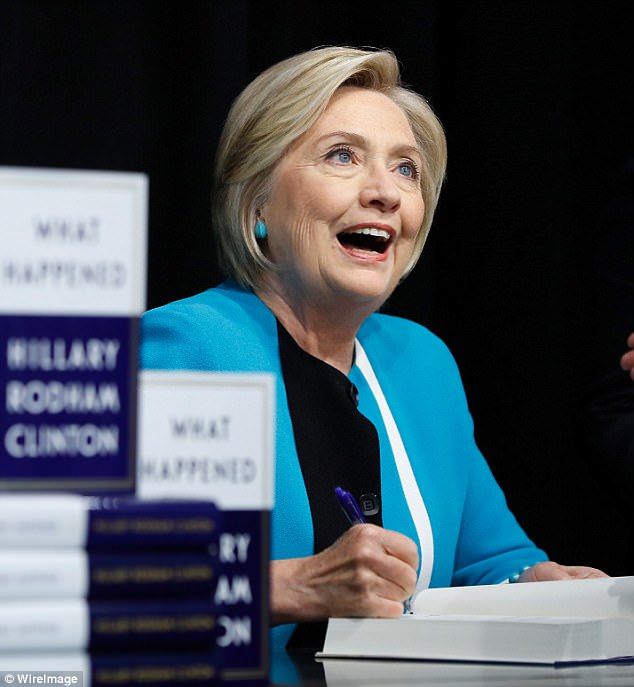 Speaking out: Clinton shied away from giving a firm yes or no answer, but she noted that ‘a woman’s right to control her body and her healthcare decisions is a fundamental human right’ 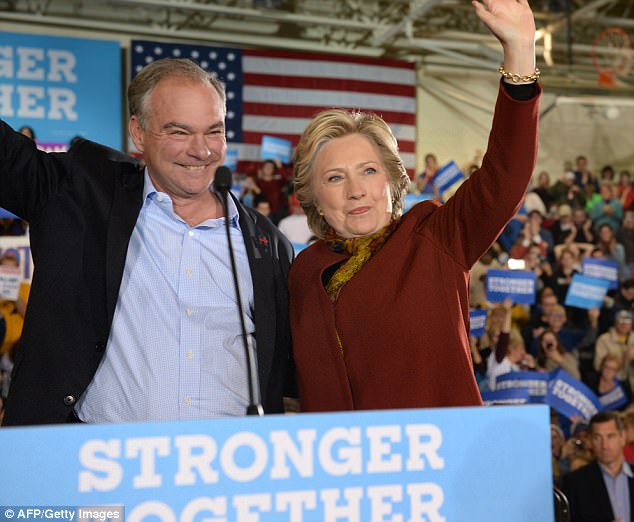 Looking back: Clinton added that she’s proud Tim Kaine was her running mate because he’s dedicated to women’s rights even though he’s personally opposed to abortion

‘I have to say that I am proud to be a Democrat, and I’m proud of all the progress that’s happened in my own lifetime,’ she said. ‘And [I] will continue to advocate for the policies of the Democratic Party. But I don’t think it’s either/or.

‘You need a very strong economic message, which I think I had, but it was hard to get through. And you need to stand up for human rights, social justice, and civil rights. And a woman’s right to control her body and her healthcare decisions is a fundamental human right.’

Clinton went on to point out that one of the reasons she is proud to have had Senator Tim Kaine as her running mate was that he was dedicated to protecting the rights of women even though he is personally opposed to abortion as a practicing Catholic.

‘He, like Mario Cuomo, long before recognized that you have to protect the rights of individuals to make the most important and intimate decisions,’ she said, ‘and productive rights are important to in order to make clear that we want to give women a choice.’