Hillary Clinton’s die-hard supporters lined up overnight in an attempt to be the first to get a signed copy of the 2016 Democratic loser’s new book at New York City’s Barnes & Noble on Tuesday.

But rather like the election they unexpectedly got scooped – by an autograph hunter with little interest in Clinton herself.

The Democratic loser was making an appearance at the bookstore in Union Square this morning where she was signing her new tell-all book, What Happened, and a new illustrated version of her 1990s children’s book It Takes a Village.

Dedicated fans lined up outside the bookstore, with coffee in one hand and a brand new book copy in the other. 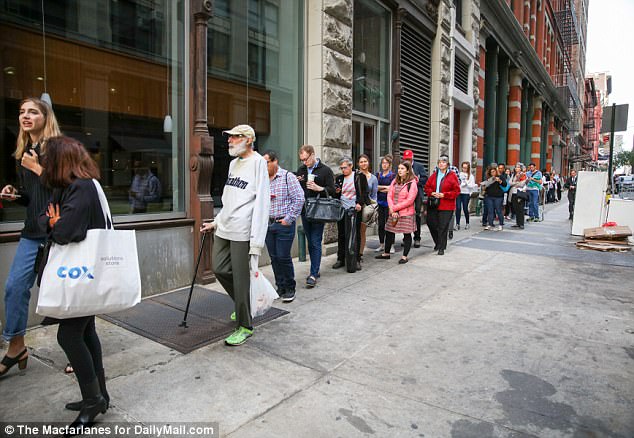 Barricades had been erected and security guards lined the sidewalks as dozens lined up at Union Square in Manhattan to purchase Clinton’s two new books, It Takes a Village and What Happened 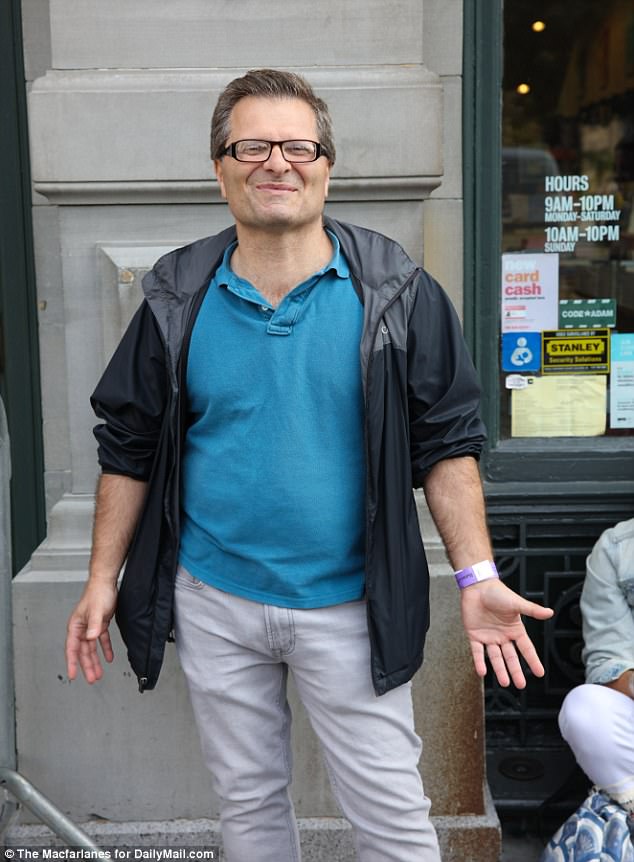 First in line: Queens native and retail employee Rosario Dimarco, 58, secured the first spot on line, but admitted that the event is the 18th book signing to add to his collection saying ‘I do it because I’m an autograph collector, mostly, I’m not really into the politics’

Crowd-controlling barricades had been erected, security guards lined the sidewalks, and man pulling an ‘Anti-Trump Band-Wagon’ paced up the streets selling ‘Dump Trump’ buttons at $4 a pop.

Rosario Dimarco, 58, from Queens, NY, secured the first spot on line to meet Clinton, but admitted that the event is just another book signing to add to his collection.

‘I’ve been here since 6.45am. I’m into book signings, this is my 18th book signing, I usually come here or go to 5th Ave. I’ve been to all the Barnes & Nobles in Manhattan,’ said the retail worker.

‘I was recently at the Al Gore book signing on August 2. I do it because I’m an autograph collector, mostly, I’m not really into the politics.

He added that while he ‘kinda likes’ Hillary, he is mainly there to nab an autograph.

‘I wish I could buy more books but they won’t allow it. I could only buy two, that’s the limit.

Clinton was expected to kick off her book signing at 11:00, but fans were told to arrive by 7am to purchase the book and line up again for the signing. She eventually turned up an hour and a half late 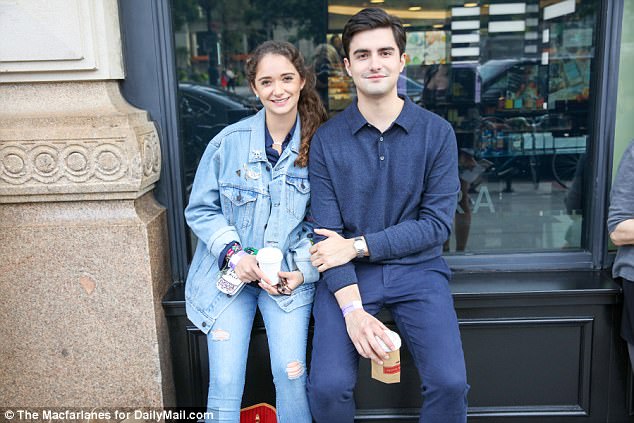 Siblings: Griselda Sanchez, 22, a college student, admitted she traveled from Boston and skipped her class to meet one of her favorite politicians (pictured with her brother Roberto, 25) 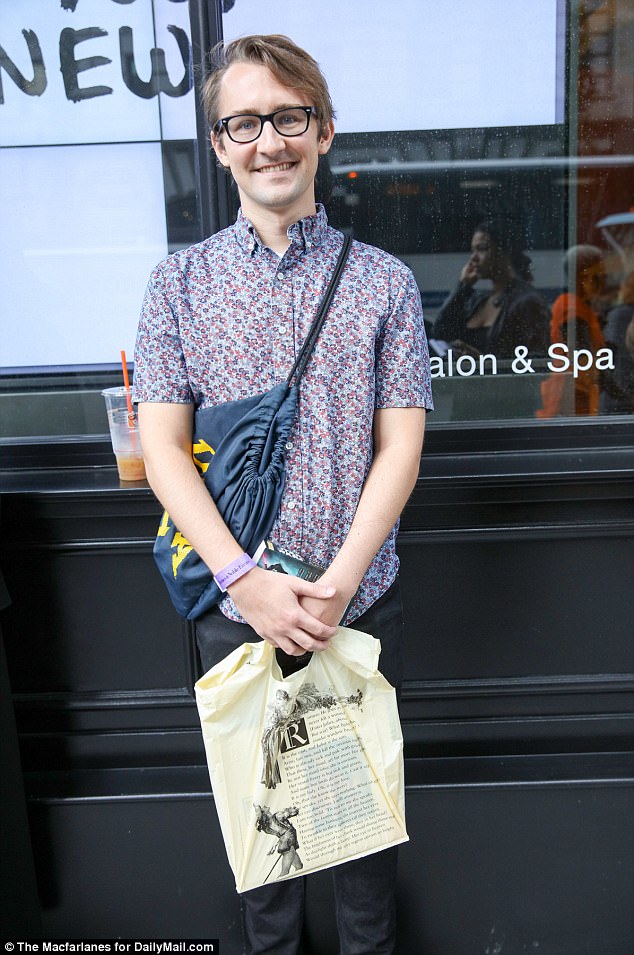 Chris Gurley, 26, who is currently on what he described as ‘fun-employment,’ chose to spend one of his free days before starting a new job waiting in line to meet Clinton

Clinton was expected to kick off her book signing at 11:00, but fans were told to arrive by 7am to purchase the book and line up again for the signing. In fact, she finally turned up an hour and a half late.

Griselda Sanchez, 22, a college student from Boston was among one the first people in line, having traveled to New York City and skipped class to meet the politician with her older brother Roberto, 25.

‘I love everything about her. We’re siblings, he’s older than me so he’s always taught me a lot about her and everything, and we read the other book,’ she said. ‘We love what she supported, women’s issues, the way she talked.

‘I’m skipping class, I live in Boston and I came for this,’ she added.

Also in line was Brooklyn resident Chris Gurley, 26, who is currently on what he described as ‘fun-employment.’

Due to start his new job in education policy on Monday, he chose to use one of his days off to meet the candidate he voted for in the 2016 election.

‘Regardless of what you think of Hillary Clinton she certainly is a representative of the times. And I just really felt like getting to meet her and attend a book signing was really getting to participate in current events,’ he said.

‘I felt she was level-headed and experienced and would help steer the United States through the challenging issues that we face today.’ 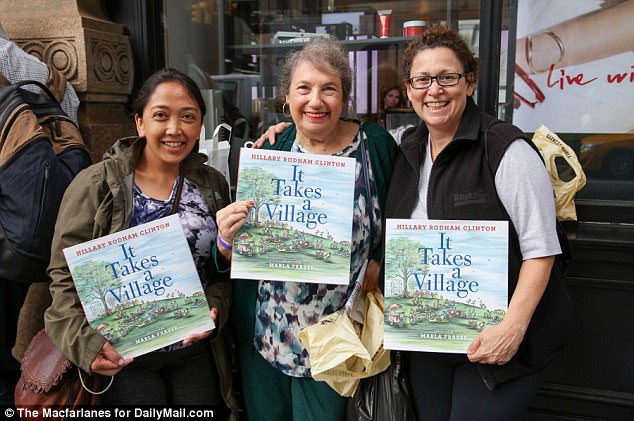 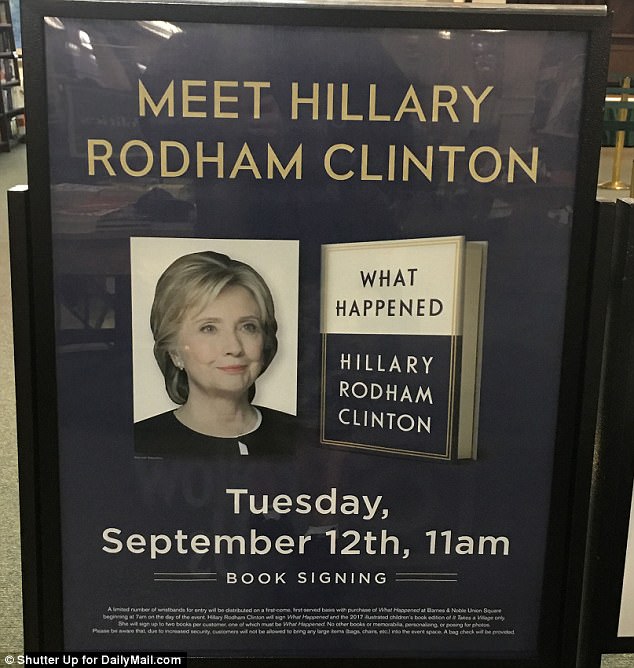 Clinton is expected to kick off her book signing at 11:00, but fans were told to arrive by 7am to purchase the book before her arrival 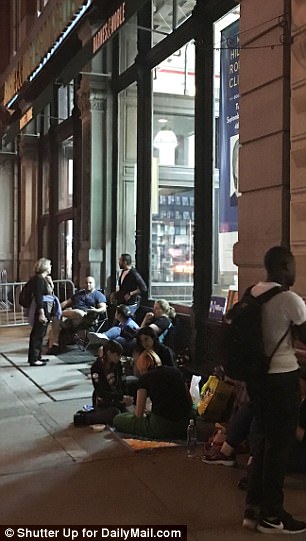 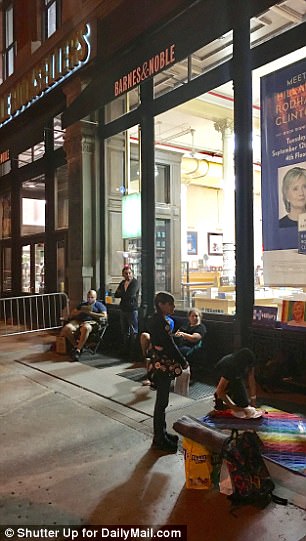 Head start: Crowds began to assemble outside of the bookstore last night where eager fans planned to camp out to secure their place in line

When asked about his support for Democratic nominee, Gurley admitted ‘love’ would be too strong a term, but he felt she was best for the presidency.

Still, Gurley would be the minority in the crowd which was filled with die-hard supporters and women who have followed Clinton’s political career since the beginning.

New York children’s book author Carol Snyder, 76, revealed she had met Clinton years before and even worked on the presidential-hopeful’s campaign.

‘I worked on the campaign, and she won it! We want to let her know that so that she feels very successful. This was stolen from her,’ Snyder said. Clinton lost the electoral college despite registering a majority in the popular vote.

During last year’s heated election, she says she ‘did everything from rallies, phone calls, whatever needed to be done.’

‘I met her before, she’s wonderful. She’s very human and she needs our support right now. ‘

Crowds outside the bookstore began to assemble on Monday night, with some eager fans choosing to sleep on the street in order to secure their place.

In fact, Hillary’s team sent several boxes of Joe’s Pizza to her supporters who were camping out on Monday night, according to Huff Post.

Fans took to Twitter to thank Clinton for their late-night snack to which she replied: ‘Enjoy! See you all tomorrow!’