Hillary: Trump’s inaugural a cry from the nationalist gut

Hillary Clinton suggested attending Donald Trump’s inauguration was a surreal experience and, like former President George W. Bush, she didn’t think much of the president’s speech.

‘And so there I was, on the platform, feeling like an out-of-body experience,’ she recalled to CBS Sunday Morning host Jane Pauley. ‘And then his speech, which was a cry from the white nationalist gut – what an opportunity to say, “OK, I’m proud of my supporters, but I’m the president of all Americans.”‘

Clinton told Pauley in her first televised interview to promote her new book that Trump had missed that opportunity to bring the country together after a rough and tumble election season.

Bush, who was standing on the podium alongside Clinton, had reportedly called the inauguration ‘some weird s**t.’

The former Democratic nominee took responsibility, and pointed fingers too, over the course of the interview, but to this day believes the ‘basket of deplorables’ comment she made about Trump supporters wasn’t so bad. 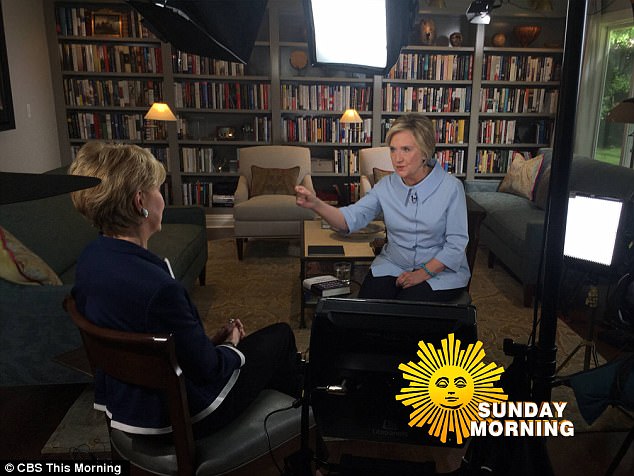 On September 9, 2016, Clinton was speaking at the LGBT for Hillary gala in New York when she lumped Trump’s supporters into two ‘baskets.’

‘You know, to just be grossly generalistic, you could put half of Trump’s supporters into what I call the basket of deplorables. Right? The racist, sexist, homophobic, xenophobic, Islamaphobic – you name it,’ Clinton had said.

The other basket was filled with ‘friends’ who felt the government and the economy had let them down, Clinton explained, encouraging her supporters to bring those Trump supporters over to her side.

Looking back on it, Clinton said, ‘I’m sorry I gave him a political gift of any kind.’

‘It was a gift,’ Pauley noted.

‘But I don’t think it was determinative,’ Clinton argued.

She said the word ‘deplorable’ was floating around in her head because ‘Trump was behaving in a deplorable manner.’

‘I thought a lot of his appeals to voters were deplorable, I thought his behavior as we saw on the Access Hollywood tape was deplorable. And there were a large number of people who didn’t care. It did not matter to them,’ Clinton said. ‘And he turned out to be a very effective reality TV star.’

So effective that his win still seems to shock Clinton, 10 months after election night.

‘I think I am good,’ Clinton answered when the CBS journalist asked her how she was.

‘But that doesn’t mean I’m complacent or resolved about what happened,’ Clinton added. ‘It still is very painful. It hurts a lot.’

Clinton answered no when asked if she had any inkling that the election’s outcome might not be in her favor.

‘I had not drafted a concession speech,’ she admitted. ‘I’d been working on a victory speech.’

Afterward she and her husband, former President Bill Clinton, packed up and went home to their Chappaqua, New York estate.

‘I just felt this enormous letdown, just kind of loss of feeling and direction and sadness,’ she said. ‘And, you know, Bill just kept saying, “Oh, you know, that was a terrific speech,” tryin’ to just kinda bolster me a little bit.’

‘Off I went into a frenzy of closet cleaning, and long walks in the woods, playing with my dogs, and, as I write – yoga, alternate nostril breathing, which I highly recommend, tryin’ to calm myself down. And – you know, my share of Chardonnay,’ Clinton admitted. ‘It was a very hard transition. I really struggled, I couldn’t feel, I couldn’t think.’

‘I was godsmacked, wiped out,’ she said.

As 2017 approached, she had to decide whether or not to attend Trump’s inauguration – not as the vanquished 2016 Democratic nominee, but because Clinton is a former first lady.

‘It’s part of the demonstration of the continuity of our government,’ Clinton said, explaining why she’d gone.

While the former first lady, ex-senator and ex-secretary of state will be touring the country on her Hillary Clinton Live tour, as a way to promote her new book What Happened, as far as being a candidate, she says that she’s done.

‘As an active politician, it’s over,’ she told Pauley.

‘I am done with being a candidate. But I am not done with politics because I literally believe that our country’s future is at stake,’ Clinton added.