An Arsenal fan on the way to a match was stabbed to death by an attacker who accused him of ‘staring at him weirdly’ on a tube platform, friends have said.

Photographer Tashan Daniel, 20, was getting the tube to the Emirates stadium to watch the game between his team and Nottingham Forest when he was the victim of an apparently random attack at Hillingdon station.

A friend, who described Tashan as the ‘softest guy’, said: ‘I’d heard someone on the opposite platform said he was staring at him weirdly.’

Around two hours later, a 22-year-old, named locally as Osvaldo Carvalho, was brutally attacked and killed near Ealing Common.

The Met Police confirmed today the two murders – which are believed to be the 113th and 114th violent deaths in London this year – are being treated as separate incidents.

Tashan Daniel was murdered on Hillingdon tube station as he set off to an Arsenal match. A friend said he believes his attacker accused him of 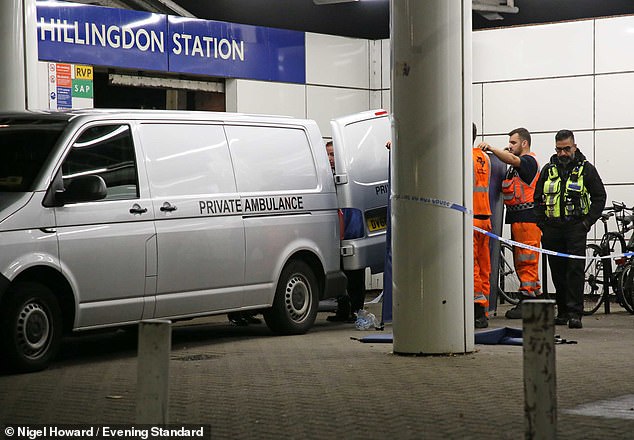 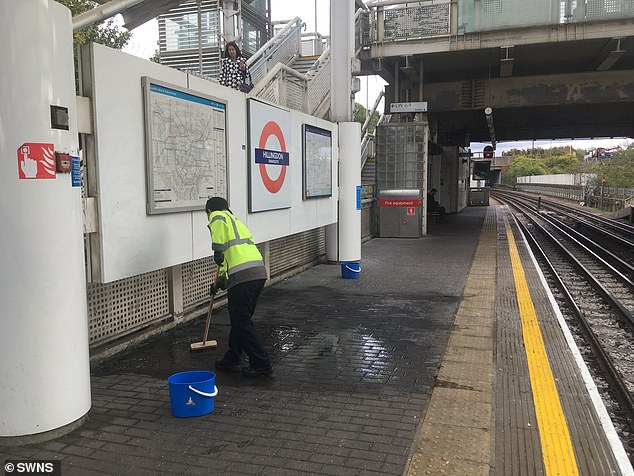 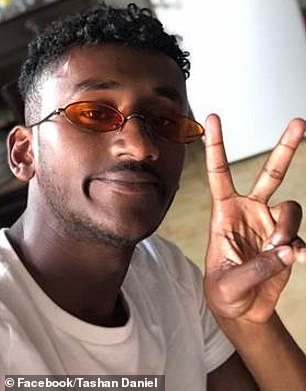 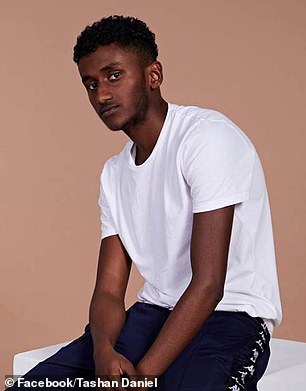 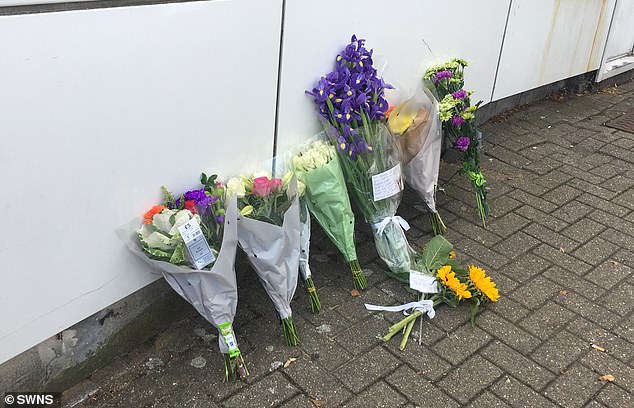 Friends left bouquets of flowers with cards at the station entrance. One read: ‘Our thoughts are with your family at this tragic time. Such a waste. Time for people to stand up and say no more!’

Passengers were in tears after witnessing the brutal stabbing which police said began on the train and spilled onto the platform. 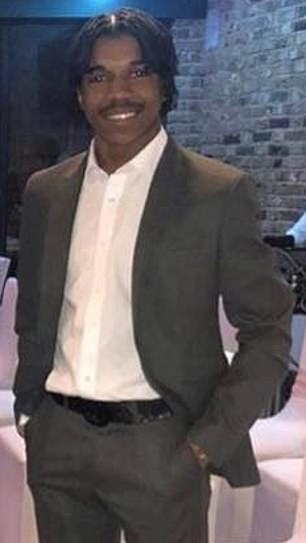 Around two hours after the Hillingdon attack, a 22-year-old, named locally as Osvaldo Carvalho (pictured), was brutally attacked and killed near Ealing Common

Shouts and screams were heard from the platforms as shocked commuters rushed out of Hillingdon Station in north west London.

Luke Flynn, a colleague and former schoolmate of Mr Daniel, said: ‘He will be missed my his friends family and work colleagues.

‘He was really involved in his track running. I’m pretty sure he was one of the better runners in the UK. He was always doing it every weekend. He was doing really well in the 100m and 60ms.

‘He was a nice guy, quiet, and just got on with his work. It’s sickening. It’s horrible to hear, he was such a nice guy, he was always up for helping. Everyone was taken aback when they heard.’

A spokesman for Arsenal FC said: ‘Everyone at Arsenal Football Club is shocked and deeply saddened to learn of the tragic passing of Arsenal fan Tashan Daniel.

‘Our thoughts are with Tashan’s family and friends at this sad time.’

Prime Minister Boris Johnson, who represents the constituency where Mr Daniel was killed, expressed his ‘heartfelt condolences’ and condemned his murder as a ‘senseless act’.

Mr Daniel is said to have been a photographer at 100% Digital studio in Park Royal.

Paramedics were first to arrive at the scene, according to eye witnesses, shortly followed by a wave of police cars and armed officers.

Mohammed Hidari was working at the coffee shop by the ticket barriers at Hillingdon station when chaos struck.

The 30-year-old, who lives in the area, said: ‘This is like nothing I have ever seen before. There were women crying and lots of men standing around in shock.

‘I saw one lady who was crying. I asked her what was going on and she said somebody had been stabbed and died. There was not anything I could do.’

Mr Daniel was pronounced dead inside one of the carriages of the train. 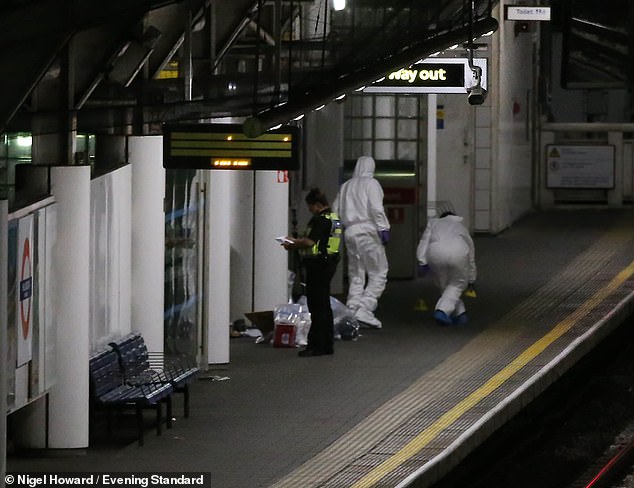 ‘He had only just celebrated his 20th birthday and was heading into London to watch Arsenal play. He did not deserve to lose his life during this senseless attack.’

He added: ‘His family are completely broken by this news and we are doing everything we can to offer them support.

‘Over the coming days we will have extra officers on patrol in the Hillingdon area, and detectives are in the local area today, speaking with residents. I am also appealing for anyone with information to get in touch.

‘We know both men fled the scene in the direction of Auriol Drive. I would ask anyone who saw anything suspicious to get in touch.

‘Likewise, we’d be keen to speak with any motorist with dashcam footage from the Auriol Drive or outside Hillingdon station at approximately 3.45pm to 4pm yesterday.’

Two hours later in Ealing, local shop workers saw the argument between four people, including a man with a large knife and two others defending themselves with glass bottles.

Hussein Osman, whose works at a local food market, said: ‘I got a call from one of the staff at about 6pm who said some youths were fighting in the park.

‘He told me he could see one of them was holding a knife – a machete style knife. It was really really large.

‘Then other two were holding glass bottles trying to protect themselves. There was a lot of shouting and a lot of running. They were chasing each other.

‘He said they were all black and looked around 19 or 20. He was stabbed on the high street and then the guys fled.

‘One of them was arrested quickly after at the bus stop for affray – I think he was the one with the guy carrying the knife.’

Friends lit candles and consoled one another on the corner of the street where Osvaldo was murdered.

A dozen friends turned out to pay their respects to the 22-year-old who they said was ‘much loved.’

Police say Osvaldo and two friends arrived in a car before heading towards Twyford Crescent Gardens.

An altercation ensued with another group of men and Osvaldo tried to run away, but was pursued by one of the men and was stabbed.

The man arrested for affray has since been released with no further action.

Detective Chief Inspector Noel McHugh, leading the police investigation said: ‘A young man has tragically lost his life and another family has been left grieving.

The death of this man will no doubt impact all those who knew him, his family, friends and also the wider community in the area where this attack took place.

‘We need those who have information to come forward now. Their information could prove vital to securing justice for the victim’s family.

‘I would like to say that our thoughts remain with the family, friends and wider community following this fatal attack.

‘We are committed to bringing them the justice they deserve.

‘This murder will no doubt alarm and concern the local community particularly coming so soon after the fatal attack in Hillingdon station on the same day. That investigation is being led by British Transport Police.

‘I would like to reassure all those who live and work in the area that we are doing everything we can to keep you safe.’

Police say they are still ‘open-minded’ as to the motive behind the Ealing attack, but do not believe the murder is linked with the Hillingdon incident.