Rudolf Hess’ long johns and a moustache comb belonging to Adolf Hitler are among a collection of 100 items that have been uncovered in an alternative look at the Third Reich.

Most of the items were confiscated by the British secret service for ‘propaganda’ purposes and have been locked away in the Imperial War Museum archives in London for the past 75 years.

The assortment of memorabilia will now feature in historian Roger Moorhouse’s new book, The Third Reich in 100 Objects.

Rudolf Hess’ long johns which were seized by the British after his misjudged decision to fly to Britain in 1941 for ‘peace’ talks. He was captured by a ploughman and handed over to the Home Guard who took him to a local scout hut at Giffnock

Hitler’s personal moustache brush which was taken from the bedroom of his Munich apartment after his death by his housekeeper Anni Winter. The 7cm horn-backed brush was an integral part of his toiletry bag and travelled with him wherever he wen

Hitler’s Third Reich lasted only 12 years yet it continues to exert a macabre fascination long after its demise and the swastika is still daubed on walls by fascists today.

Included in the comprehensive list is Hitler’s personal moustache brush which was taken from the bedroom of his Munich apartment after his death by his housekeeper Anni Winter.

Hitler carried around the 7cm horn-backed brush which according to his entourage was an integral part of his toiletry bag and travelled with him wherever he went.

He worked hard with his photographer Heinrich Hoffmann to hone his public image in the 1920s and create a ‘look’ that would appeal to his audience.

Hitler wanted to be seen both as the stern, unyielding messiah of the German people and also the genial, unpretentious leader happy to pat small children and play with his dog.

He was so image-conscious that he would not allow any photograph of him wearing glasses to be published. 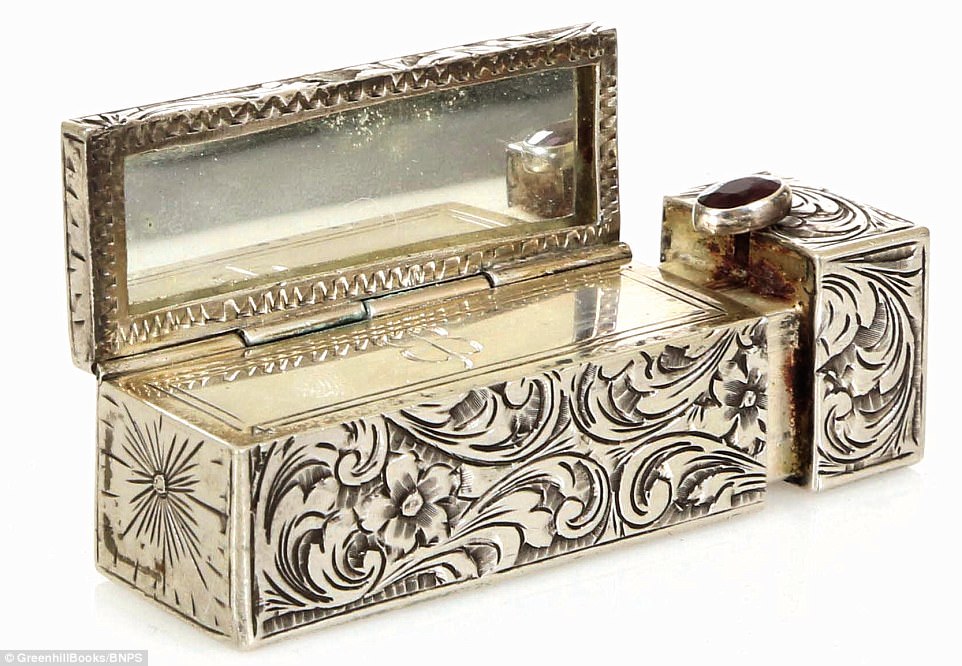 Another item highlighted in the book is Eva Braun’s lipstick case, which was a gift from Hitler in 1938. She was always immaculately dressed and often sported the latest gifts from Hitler be they gold watches, jewellery or trinkets 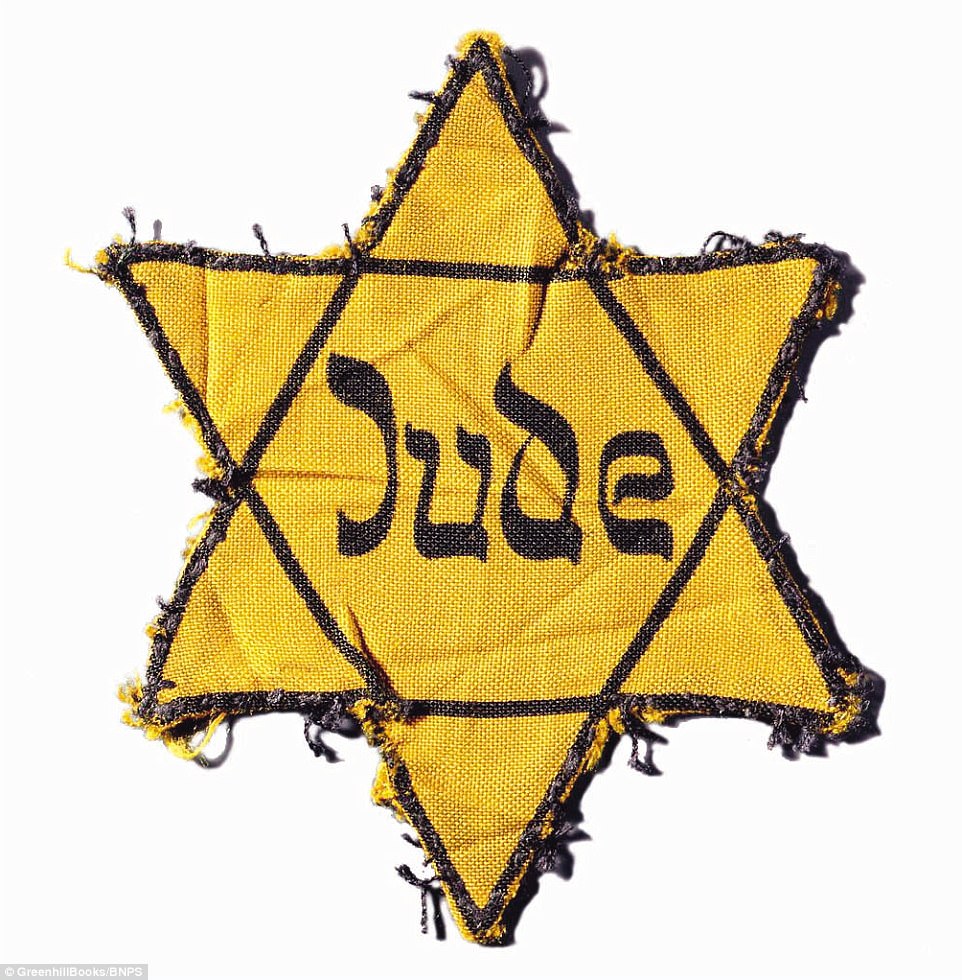 A Star of David used to identify Jews in the Reich. These would become commonplace on prisoners’ outfits in Nazi concentration camps 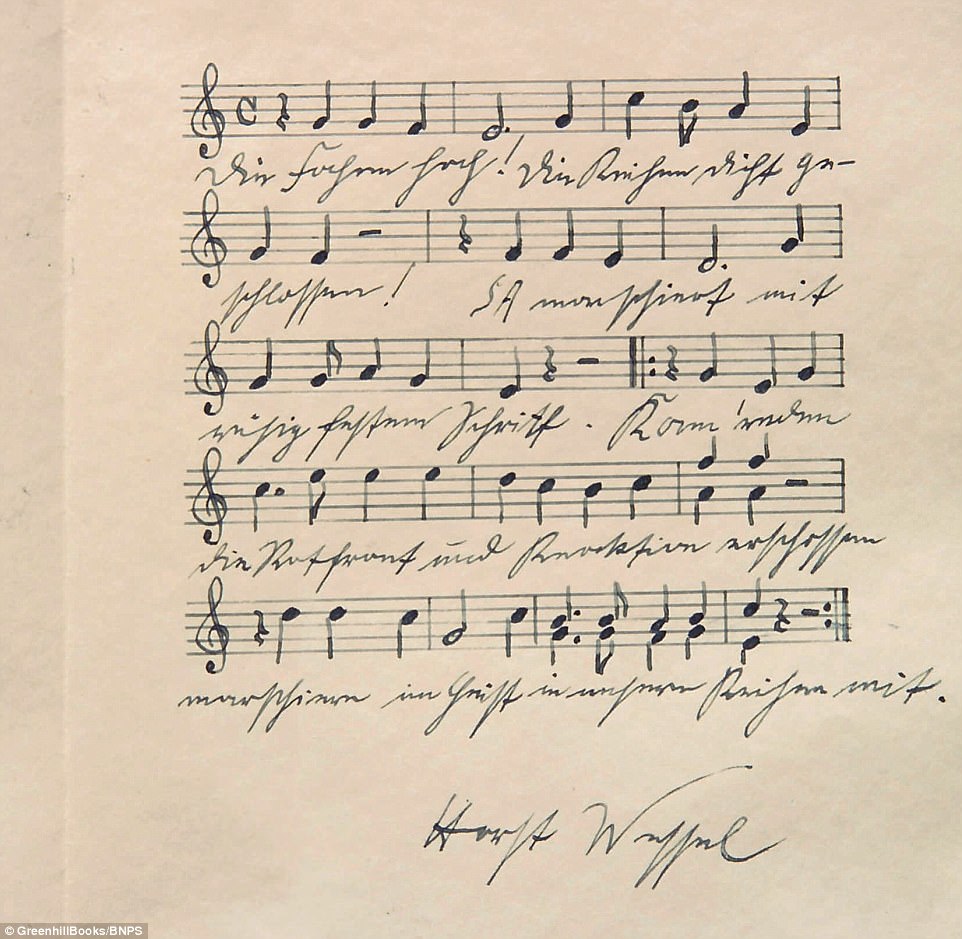 A signed score of Die Fahne Hoch! that Horst Wessel sent to Hitler. The song was cobbled together from old folk tunes as a New Year gift to Hitler

Another item highlighted in the book is Eva Braun’s lipstick case, which was a gift from Hitler in 1938.

She was always immaculately dressed and often sported the latest gifts from Hitler be they gold watches, jewellery or trinkets.

Hitler’s chief architect and subsequently his minister of war production Albert Speer designed a monogram for Braun combining her initials ‘EB’ into a four-leaf clover which adorned many of her possessions.

It can be seen on the inside of her elaborately engraved lipstick case made from Italian silver which was most likely given away to a member of the Berghof household.

Mr Moorhouse also reveals the bizarre tale of Nazi deputy leader Rudolf Hess’ thermal underwear, which was seized by the British after his misjudged decision to fly to Britain in 1941 for ‘peace’ talks.

On the evening of May 10, 1941, Hess flew over to Britain with a peace offer and parachuted to earth over lowland Scotland.

He was captured by a ploughman and handed over to the Home Guard who took him to a local scout hut at Giffnock.

Confessing his true identity, Hess asked to see the Duke of Hamilton whose estate was nearby.

He was interrogated but his offer was not taken seriously, with Churchill refusing to change his plan to see the latest Marx brothers’ film to meet him.

Hess was dispatched to the Tower of London and then to Mytchett Place, a country house near Farnborough in Surrey.

Soon after his arrival Hess’ woollen long johns were confiscated.

The Ministry of Economic Warfare petitioned the British Intelligence Service to ask permission to examine Hess’ underwear in the hope that ‘something of propaganda value’ might be gleaned.

Permission was granted and the long johns were procured, but they turned out to be plain and unremarkable, with the head of Secret Intelligence Service describing them as ‘of the cheapest variety’. 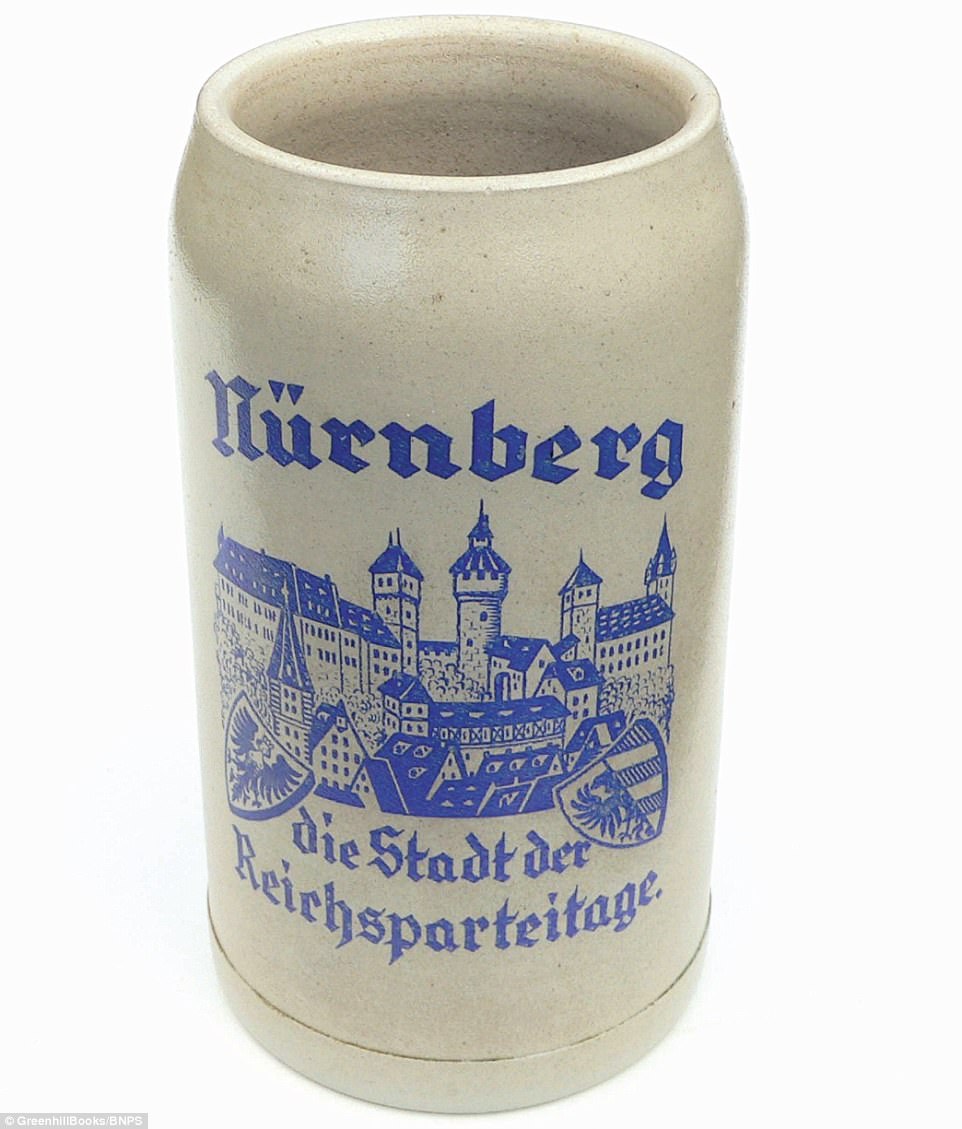 A souvenir beer stein from a Nazi Party rally in Nuremberg. Hitler garnered much of his early support by speaking in beer halls 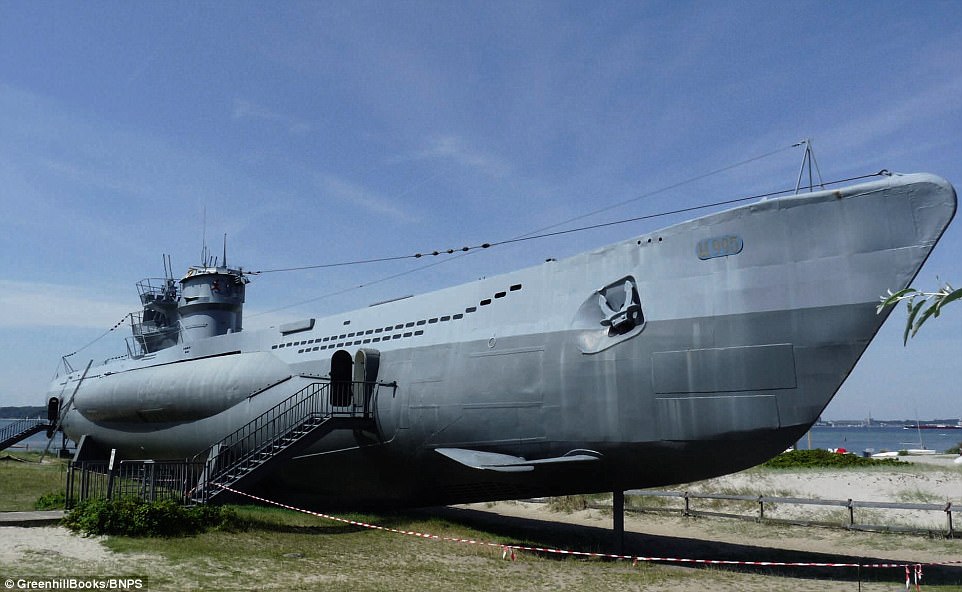 U-995 at Laboe, the last surviving Type VII U-boat. At the end of the war on 8 May 1945 she was stricken at Trondheim, Norway and surrendered to the British. In December 1952 U995 became the Norwegian submarine Kaura and in 1965 she was stricken from service and returned to Germany as a historical item

They were stored in the archives of the Imperial War Museum in London in 1942 and remain there to the present day.

Hess returned to Germany to stand trial in the Nuremberg Trials of major war criminals in 1945.

During much of the trial he claimed to be suffering from amnesia, but later admitted this was a ruse.

Hess was convicted of crimes against peace and was transferred to Spandau Prison in 1947 where he remained until he committed suicide aged 93 in 1987.

Another fascinating tale highlighted by Mr Moorhouse is that of Horst Wessel, the 21-year-old son of a Lutheran pastor and the leader of his local Sturm of the SA, the Nazi ‘Brownshirts’. 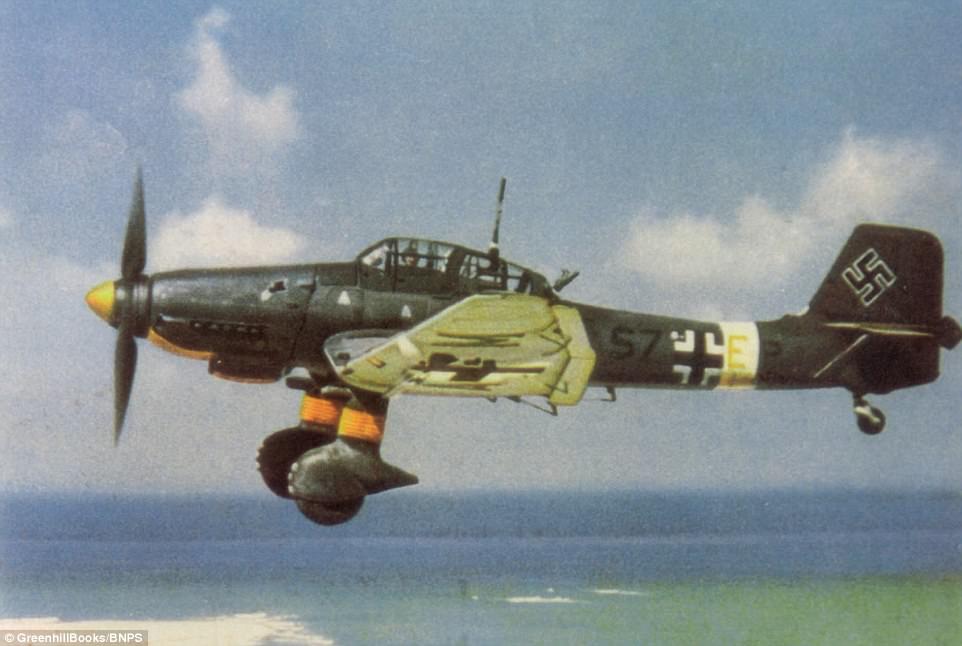 A Stuka in flight over the North African coast in 1941. These models spearheaded the air assaults in the invasion of Poland in September 1939 and crucial in the rapid conquest of Norway, the Netherlands, Belgium and France in 1940 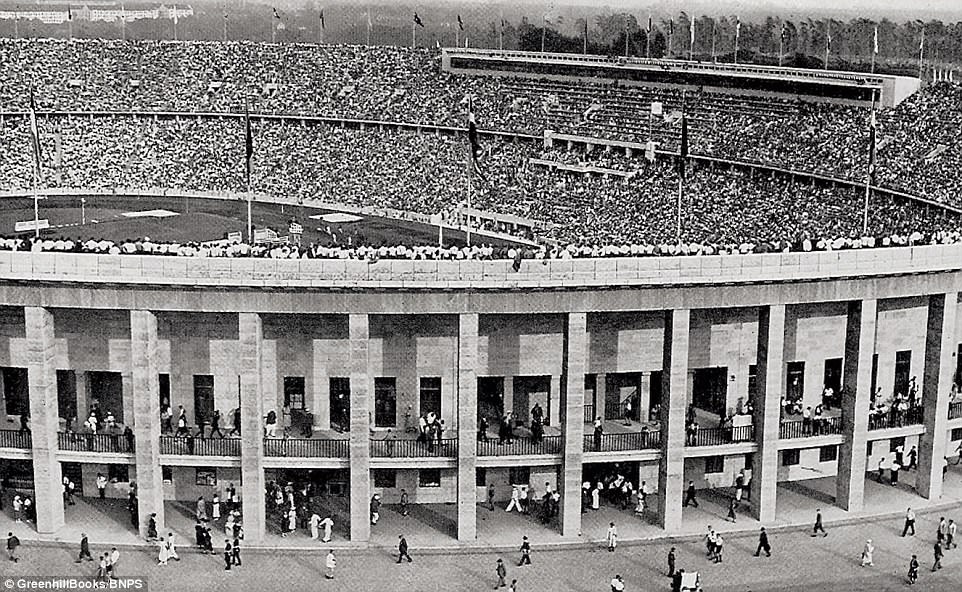 The Olympic Stadium, packed for some of the track and field events in 1936, the year when the Nazis hosted the sporting event, bringing controversy with the participation of some black athletes such as US sprinter Jesse Owens

He penned a song – ‘Die Fahne hoch!’ or ‘The Flag on High!’ – cobbled together from old folk tunes as a New Year gift to Hitler.

Wessel sent him a package of items including a photograph of himself in SA uniform, a covering note addressed to ‘Mein Führer’ and a handwritten score of his song with lyrics to the first verse.

As he hovered between life and death for the next five weeks, he became a Nazi martyr, and on February 7, 15,000 people sang his hymn at a Nazi rally at the Berlin Sportpalast.

He died weeks later but his song became a secondary national anthem with all Germans obliged to give the Hitler salute as they sang. 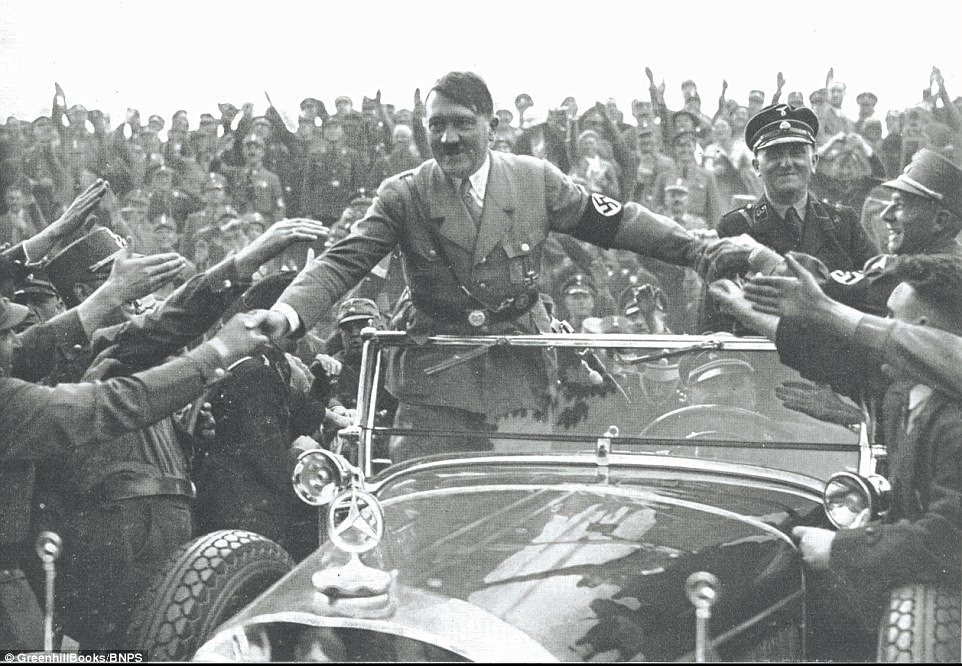 The Fuhrer’s car of choice was a Benz (he is pictured standing up inside of it) which was bulletproofed, but vulnerable 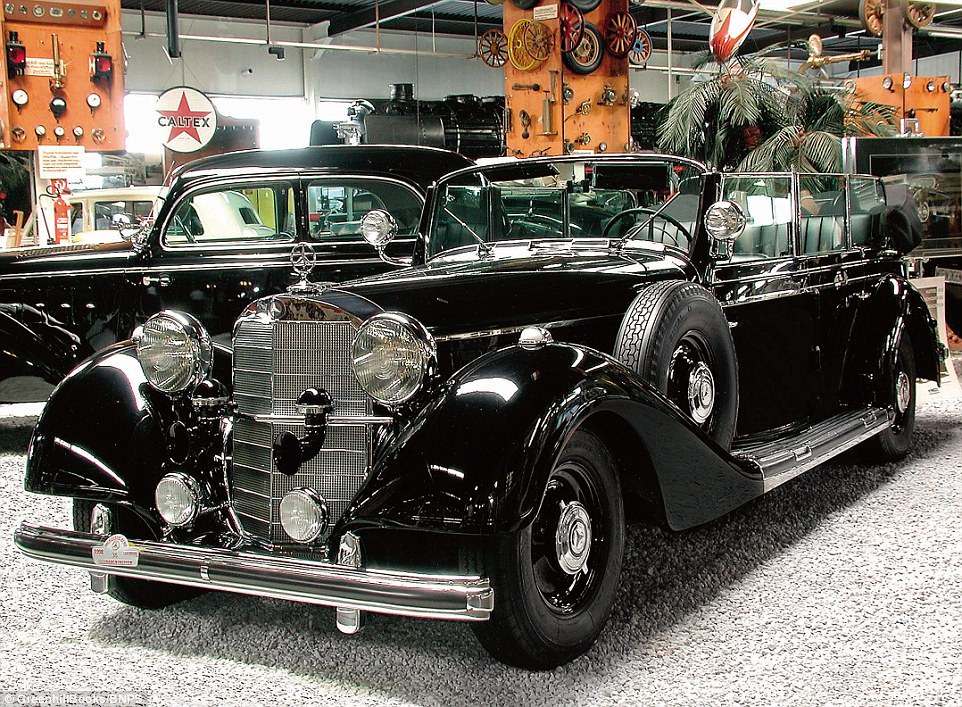 The very same car pictured today. The items have been locked away in the Imperial War Museum archives in London for the past 75 years 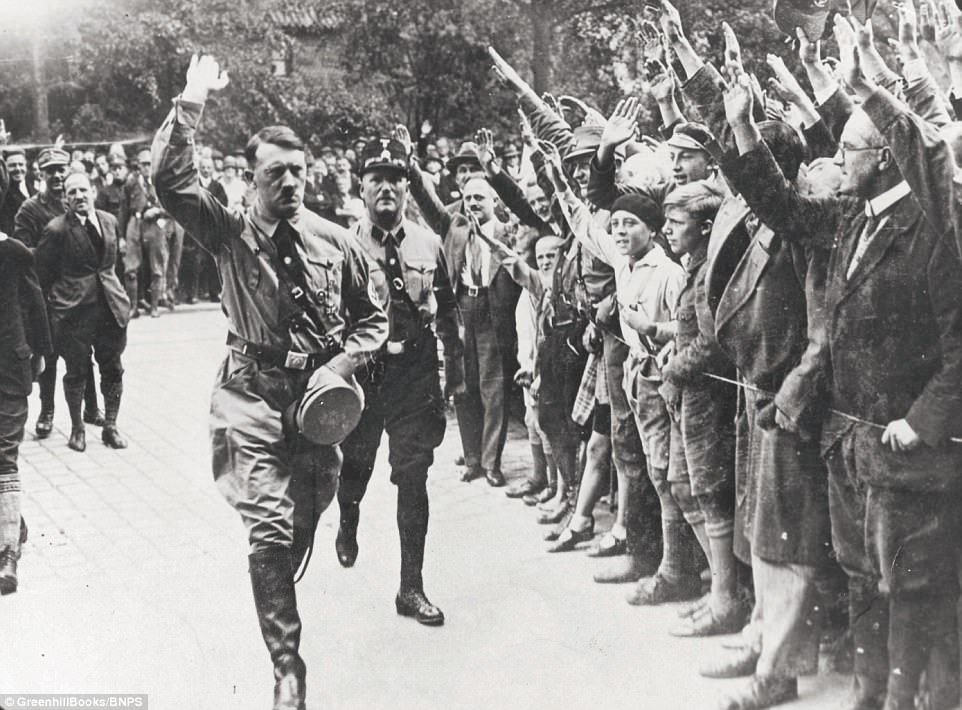 Hitler using the a Nazi salute to greet members of the public.

The song is still banned in Germany to this day.

Mr Moorhouse, 48, of Tring, Herts, said: ‘I had heard a rumour that Rudolf Hess’ long johns were in the Imperial War Museum archive so I contacted them and found out they had been there since 1942.

‘If you look into the history of Hess’ incarceration before his trial in 1945 the secret service confiscated all his personal effects to see if there was anything vaguely embarrassing they could use for propaganda purposes.

‘Hess came here to sell a peace offer to the British before the Soviet Union invasion but he was derided on both sides and the British looked for anything that would humiliate him.

‘Hitler’s moustache brush was absolutely pivotal to him as the moustache became a fashion statement. 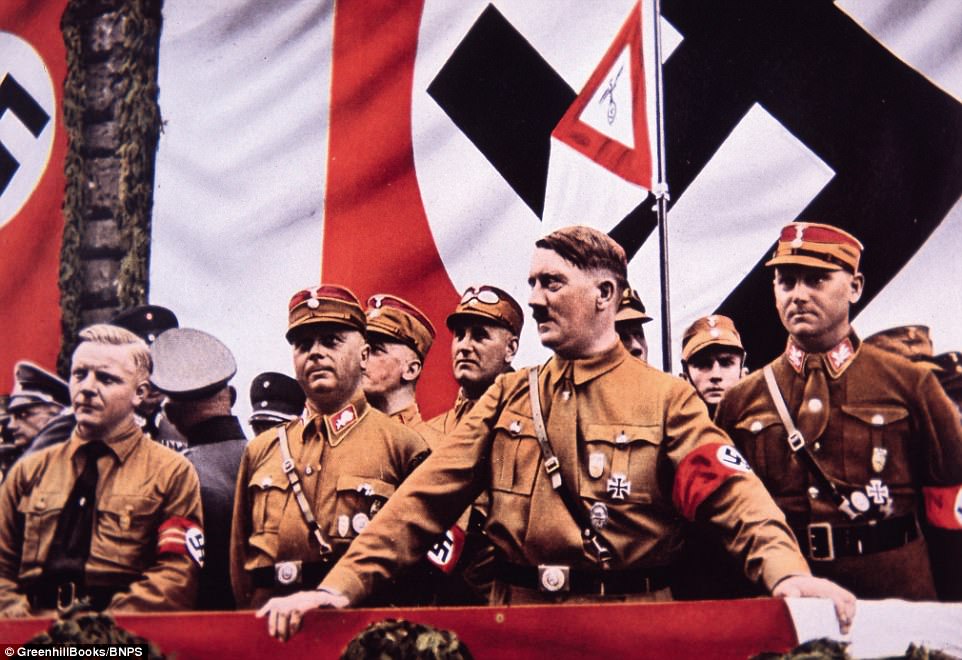 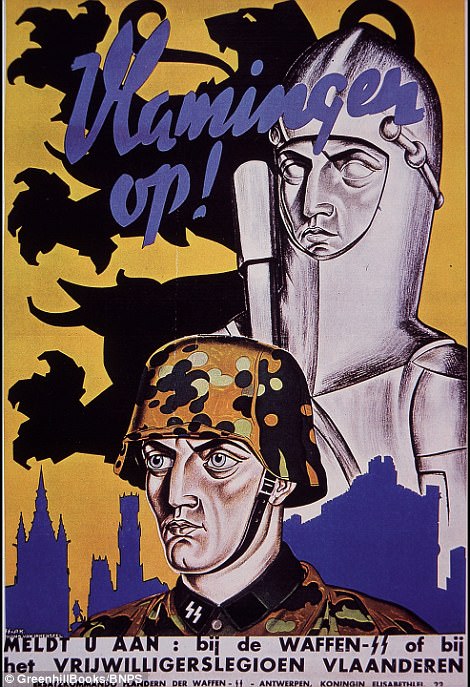 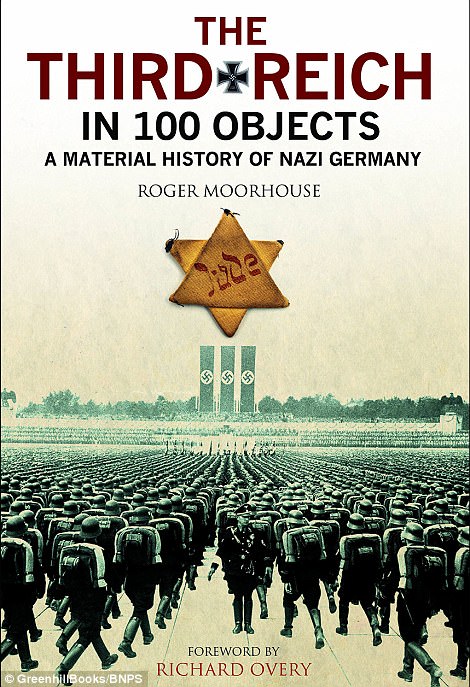 A Waffen-SS poster aimed at recruiting Flemish men in occupied Belgium (left). The items feature in the book ‘The Third Reich in 100 Objects’, by Roger Moorhouse (right)

‘He was advised to shave it off in 1923 but he refused and said that in 10 years everyone would be copying his moustache.

‘Close friends did adopt his style as an act of loyalty to the Fuhrer.

‘By taking a different approach and focusing on objects instead of conventional documents you get a real insight into the true nature of the Third Reich.

‘Social history tends to be overlooked so it has been refreshing to adopt a slightly different twist which I believe provides a much more rounded view of the regime.’

THE 100 ITEMS THAT FEATURE IN THE BOOK