Hoda Kotb was moved to tears while virtually officiating a couple’s wedding after they were forced to cancel their big day due to the coronavirus pandemic.

The Today co-anchor, who happens to be an ordained minister, revealed on Thursday morning’s show that she recently married John Sizer and Melanie Mulvihill from Phoenix, Arizona, in a ceremony that took place on a Zoom conference call.

Hoda, 55, shared footage of the heartwarming moment she pronounced the couple husband and wife, and like any other wedding, there were tears of joy. 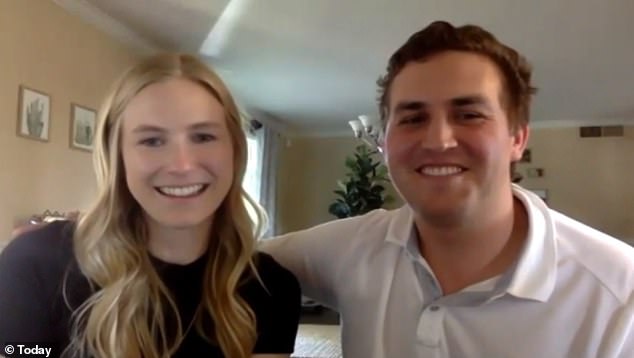 Special: The surprise ceremony, which was organized by the bride’s maid of honor, took place on a Zoom conference call joined by their family and pastor

The bride’s maid of honor, Kira Sullivan, helped John set up the surprise ceremony, which took place the weekend after April 18 — their original wedding date.

‘Getting to interact with the Today show and being able to give her the surprise of marriage when she was not expecting it at all at this point, I think it would make her life,’ John said ahead of the wedding.

Melanie thought they were just having a Zoom call with Kira to toast what would have been their first weekend as a married couple, but she was in for a surprise.

Kira soon revealed that the couple’s family members and pastor were on the call, prompting John to pop the question for a second time.

‘Will you marry me right here, right now, virtually, in the middle of a crisis?’ he asked his bride-to-be.

‘Yeah,’ she responded with a smile. 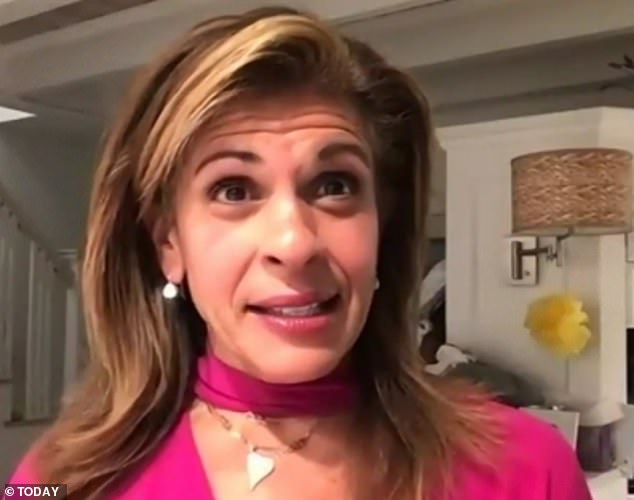 Emotional: The Today anchor is an ordained minister, and was more than happy to help the couple tie the knot 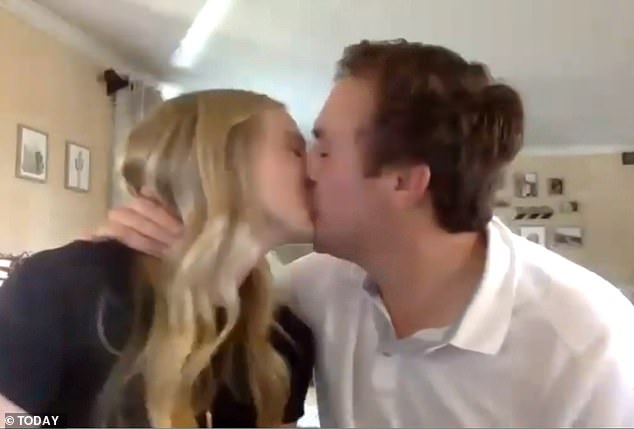 They do! Hoda shared footage of the heartwarming moment she pronounced the couple husband and wife during the Zoom call

The pastor started the ceremony, telling the couple that when he sees their relationship, he sees ‘two people that are in love,’ but there were more surprises in store for the bride and groom.

‘I don’t know if you know this, but I’m ordained,’ the host told her. ‘So I wanted to help you out.’ 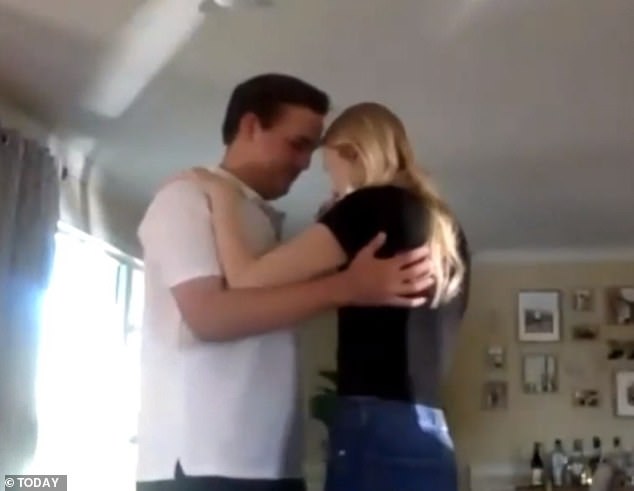 First dance: She continued the celebration by having country singer Russell Dickerson join the Zoom call to serenade the newlyweds with his song ‘Yours’

Hoda continued the celebration by having country singer Russell Dickerson join the Zoom call to serenade the newlyweds with his song ‘Yours’ — the song they had chosen for their first dance at their wedding.

The journalist broke down in tears as she watched the newlyweds sway back and forth to the music, and she revealed on the Today show that she wasn’t the only one.

‘It ultimately comes down to love, and I’m just happy my family and friends all could be present and I got to marry the love of my life,’ Melanie told Today. ‘It will be something to remember forever.’

The next day, Melanie put on her wedding dress and stepped outside with her new husband as their loved ones held up signs and cheered for them.

After airing the footage, Hoda noted that the couple’s pastor had to be part of the wedding in order to finalize their union. She advised anyone who is planning a virtual wedding to check their state laws to ensure the union is official.

The co-anchor has her own wedding on the horizon, though she admitted earlier this month that she’s not sure if her wedding to Joel will go ahead as planned in the fall.

In an exclusive interview with DailyMailTV, she said she ‘hopeful’ that she and Joel, 62, will be able to keep their original wedding date.

‘We had the date scheduled and it’s in the calendar,’ she said. ‘We took care of the bookings and those kinds of things, so I think what we’re going to have to do is play it by ear, because I don’t know, I’m not 100 per cent sure what will happen as a result of this.’

The couple got engaged in November during a romantic Mexican vacation and had hoped to tie the knot this fall, less than a year after Joel’s proposal. But Hoda insisted they aren’t going to stress if that can’t happen.

‘I was just saying to Joel, “I don’t care where we get married,”‘ she explained. ”I’m happy to have a nice destination wedding or whatever, but I’m equally happy just to do it. This has kind of taught us all those things. Like really what’s the important part?

‘As long as you can spend time with your family and friends, it doesn’t really matter where you do something like that or even when. So I’m hopeful that we’ll have our friends and family and whenever that day comes, Hallelujah, let’s do it.’