Holiday money: Travellers reminded to sort currency before the airport

Those heading abroad for the half-term holidays are being warned to watch out for the rip-off currency rates as they can be as much as 30 per cent lower than elsewhere.

When travellers were last able to take a half-term holiday restriction free in 2019, the average airport currency exchange rates were 16 per cent lower than the market rate, according to data from FairFX.

It means for every £500 exchanged at an airport, travellers received £78 less for their money.

The worst rate recorded around half term was at Stansted Airport, where travellers were offered exchange rates 30 per cent lower than the market rate, losing them £149 from their holiday spending money for every £500 exchanged.

As Britons jet off on half term trips, holidaymakers are being warned not to fall into the trap of rip off airport exchange rates and to make sure they get the most for their travel money.

Ahead of half term, FairFX contacted 19 airport currency desks across the UK, including Heathrow, Stansted, and Manchester airport, but were prevented from obtaining their exchange rates with providers refusing to give rates over the phone.

To get the best rates, travellers can use top up prepaid currency cards, which allows users to lock in exchange rates, use current accounts with free spending abroad or order currency online to pick up at locations across Britain – including at the airport – beforehand.

Ian Strafford-Taylor, chief executive of FairFX, said: ‘Amid the excitement of what will, for many families, be the first holiday abroad since the pandemic began, it might be easy to forget to sort your currency in advance.

‘But leaving it to the last-minute leaves passengers vulnerable to the extortionate rates on offer at airport currency desks.’

‘We all expect to pay a little more for convenience, but FairFX’s mystery shopping of airport exchange desks across the UK over the past four years has found that leaving exchanging your currency until the airport is the worst thing travellers can do.

‘The safest way to guarantee getting more bang for your buck is to plan ahead and avoid changing currency at airport exchange desks altogether.’ 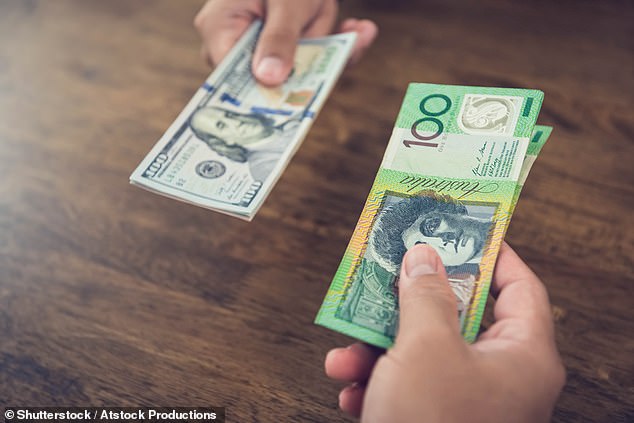 Currency exchange firm, FairFX, found exchange prices at airports were as much as 30% more

Top tips for making the most of your holiday money

1. Track currency: Keep a close eye on currency movements to help you buy at the optimum time.

Set-up a currency tracker which will notify you when rates are on the rise, so you can take advantage.

2. Lock-in rates: If you know you’re going to be travelling, make sure you plan ahead.

Load a prepaid currency card ahead of time to lock in rates and protect yourself from any potential future exchange rate fluctuations.

If you’re happy with the current rate on offer, buy your currency now to guarantee that rate for your holiday.

Exchange rates at airports can be up to 30 per cent more expensive meaning you could lose over nearly £150 of cash for every £500 you change.

4. Cards: Debit and credit cards are good back-ups but beware of ATM and transaction fees as well as what exchange rate you’ll be forced to use.

Instead, use a specialist currency card or a card designed for overseas spending which are free to use in shops and restaurants.

This allows the other party to decide the exchange rate, a process known as Dynamic Currency Conversion, and it’s unlikely the rate they decide on will be in your favour.

7. Fee free credit cards: These can also be used abroad – but you’ll need to play by the rules, or be stung by high interest. You can look at the best credit and debit cards for overseas spending here.

8. Order currency online: You can lock-in a far superior rate at exchanges across the country ahead of time. Often, these better rates can be locked in at the airport – so you can beat the rip-off rates.