Councillors in a Costa del Sol holiday resort have been forced to axe plans to paint all the beaches fluorescent green, blue, yellow and red.

Town planners in Fuengirola came up with the idea because they felt it would be a tourist attraction and bring more colour to the town.

But the plan has horrified residents and the first phase of the face-lift was slammed as ‘absurd’ by a local politician.

Work had already started on painting beaches in the Spanish holiday resort of Fuengirola in fluorescent colours such as green, blue, yellow and red

A team of 10 council workmen recently took to the popular beach of San Fernando to paint the huge rocks along the beach in various rainbow colours.

They insisted the spray paint was environmentally friendly and would do no harm to either people or wildlife.

‘We just wanted to make it look like a giant mosaic,’ said a council spokesman.

And mayor, Ana Mula added: ‘We thought it looked quite striking!’

She also revealed that the intention was to roll out the programme to all Fuengirola’s beaches and coastal areas.

She insisted: ‘It’s an artistic initiative. There are many people who come to walk, to sit on a rock to read a book or just to sunbathe.

‘In short, it is an attractive area for our municipality and for all the residents of the city, as well as being one of our best-known points and a hallmark of Fuengirola.’

However, the council has agreed to stop the painting and return the beach to its natural look following a public consultation exercise and opposition from rival party groups.

The council decided to conduct a citizen poll, which came out against the colourful scheme.

The council declined to say what the voting split was but confirmed it was dropping the idea and is now investigating the cost of reversing the work.

Spokesman for the Ciudadanos party, Francisco Javier Toro, said: ‘It’s the most absurd thing I have heard of in a long time.’ 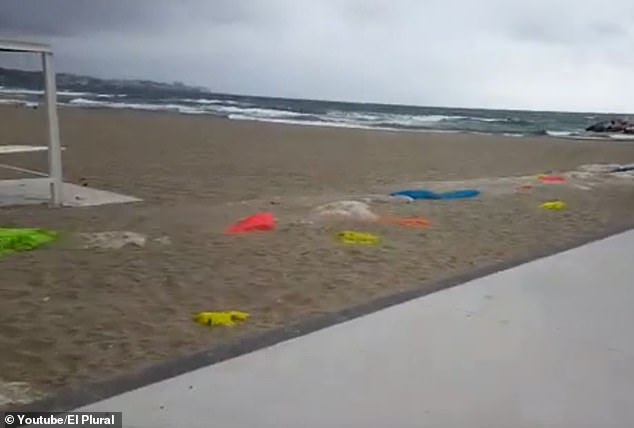 He also slammed the cost involved as the first phase took 10 workmen two weeks to complete.

He added: ‘These rocks are part of the cultural and historical heritage of our municipality.

‘Spending this public money could be much more beneficial for other areas and tasks that our municipality urgently needs.’