Holidaymakers scream as two cruise ships screech and grind together

Holidaymakers were left shocked when two cruise ships collided causing loud screeching and debris to go flying into the sea.

The MSC Poesia and the MSC Orchestra, who are both owned by Swiss-based MSC Cruises, smashed into each other at the port in Beunos Aires.

The clip, filmed in in Buenos Aires, Argentina, shows a ship manouvering dangerously close to another vessel docked in the port.

Onlookers gasp and shout in horror as the cruise ship glides towards the other vessel.

The clip, filmed in in Buenos Aires, Argentina, shows a ship manouvering dangerously close to another docked vessel in port

As the huge ship drifts past the other, which is docked, it scrapes the end of the vessel making a loud screeching noise.

One onlooker can be heard shouting ‘No, no, no’ seconds before a collision.

Crunching can be heard as metal collides and debris begins to tumble into the ocean as the two cruise ships hit each other.

People onboard the ship can be seen craning their heads out of windows to witness the shocking crash.

Fortunately the captain manages to swerve the cruise ship in time to avoid a more serious crash.

The 2,500-capacity ship was maneuvering into port at the time – but luckily no one was injured.

The captain of the MSC Orchestra liner, which weighs 92,409-tonne, reportedly lost control as he came into port.

The ship suffered minor damage and was delayed as it set off on an eight-night South America cruise with stops in Brazil and Uruguay.

The MSC Poesia and MSC Orchestra are identical in weight and capacity. 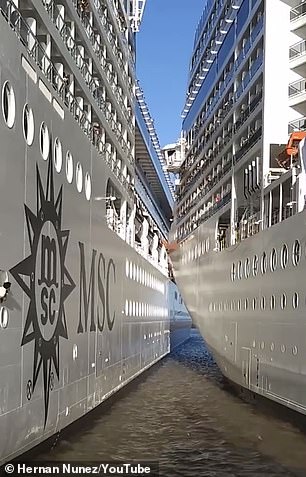 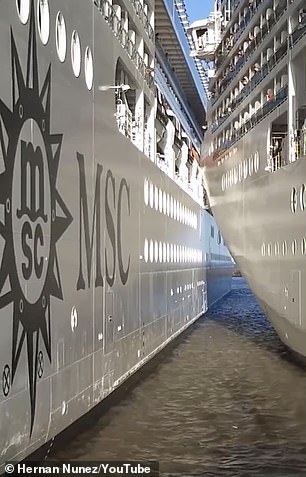 As the huge ship drifts past the other, which is docked, it scrapes the end of the vessel making a loud screeching noise

However the Orchestra charges £6,158 for a suite on its nine night South America cruise, while a seven night tour of the continent on the Poesia comes in at £4,758 for a suite.

The Orchestra offers spacious and elegant interiors, with fine dining and spa, as well as relaxation amenities.

They offer a ‘Covent Garden Theatre’ inspired by London’s West End and a ‘Palm Beach’ casino in homage to Las Vegas.

MSC describe the Poesia as ‘innovative’, featuring three outdoor pools, including one which is accompanied by a massive poolside cinema screen.