‘NYE is approaching!’ Holly Willoughby strikes a sexy pose in a dazzling sequin jumpsuit as she gears up for New Year’s Eve celebrations

She’s taking a break from This Morning over the festive season.

And on Thursday, Holly Willoughby struck a sexy pose in a dazzling sequin jumpsuit as she geared up for New Year’s Eve celebrations.

The presenter, 41, held her toned arms up while her fingers ruffled through her disheveled blonde tresses, for the edgy snap posted to her lifestyle brand Wylde Moon’s Instagram.

Dazzling! On Thursday, Holly Willoughby, 41, struck a sexy pose in a dazzling sequin jumpsuit as she geared up for New Year’s Eve celebrations

Holly showed off her enviable physique in the shimmering red and pink tone number, which featured one-shoulder.

The TV host opted for a simple make-up look and accessorised with a simple, delicate gold bracelet.

The gorgeous image was captioned: ‘NYE is approaching!’ before promoting a guide on the Wylde Moon website promising to show how to create ‘easy new hairstyles that have something extra special’. 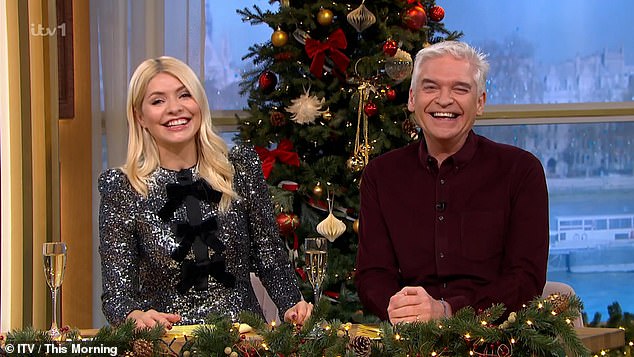 Hilarious! t comes after Holly tried to hold back her laughter as Santa slipped in a cheeky innuendo during The Christmas Day special episode of This Morning

The sizzling snap comes after Holly stifled her laughter as Father Christmas made a very X-rated joke during This Morning’s Christmas Day episode.

Holly was speaking to Santa in the studio for the festive special, and mentioned that he must be having a well-deserved day off on the 25th.

‘Obviously it’s a holiday day for all of you, I’d imagine?’ Holly asked Father Christmas, who spoke to the hosts live from his grotto in the North Pole.

‘Well no, we have a big do today,’ Santa told the host. ‘Mrs Claus is doing a Christmas dinner for all, for everyone – all the elves, the red carpet.

‘I’m looking forward to the pigs in blankets and Mrs Claus loves a good stuffing.’

This left Holly stopping herself from laughing, while Phil gave a funny stare to the camera to show they’d understood the sexual innuendo. 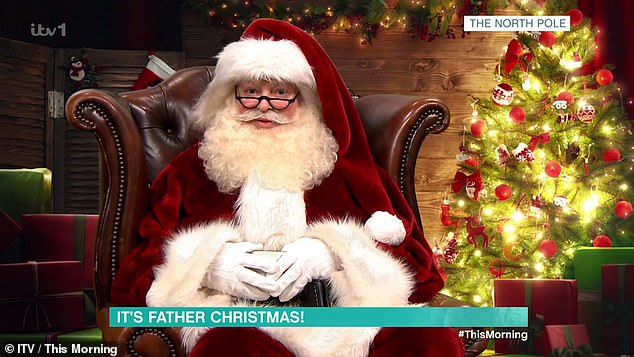 Cheeky! Presenting alongside co-star Philip Schofield, Holly was speaking to Santa in the studio on Sunday morning’s festive show when he quipped: ‘Mrs Claus loves a good stuffing!’