Holly Willoughby’s modest style has seen a bit of a shake up in recent weeks after fans criticised the presenter’s fashion choices as ‘frumpy’.

The This Morning presenter, who was previously famed for her wholesome pleated skirts, sent her social media fans into a frenzy on Thursday when she shared a photo of her latest look.

Holly, 36,  shared a photo of her outfit ahead of filming for The Jonathon Ross show, in which she was pictured wearing a rainbow-sequinned mini dress.

Holly Willoughby showcased her most daring look yet when she shared a photo of her £1,400 Ashish dress with her Instagram followers on Thursday

The form-fitting statement frock is a far-cry from the presenters typical fashion choices with a thigh skimming hemline showcasing her shapely legs.

But it seems that her style risk paid off with the £1,400 piece by designer Ashish amassing almost 300,000 likes from fans.

The Wizard of Oz inspired dress, which has been intricately hand-embroidered, may come with a hefty price tag but has already sold out in every size on etailer Matches Fashion.

The luxury online retailer caters for high-end fashionistas and celebrities, providing looks picked straight from the runway, and it seems Holly’s latest outfit choice has proved a hit among customers. 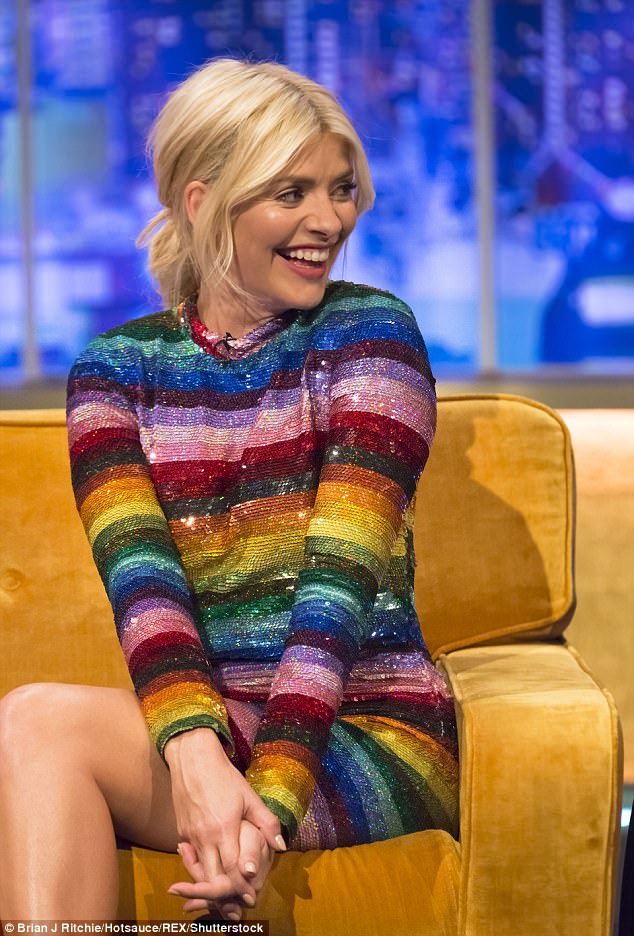 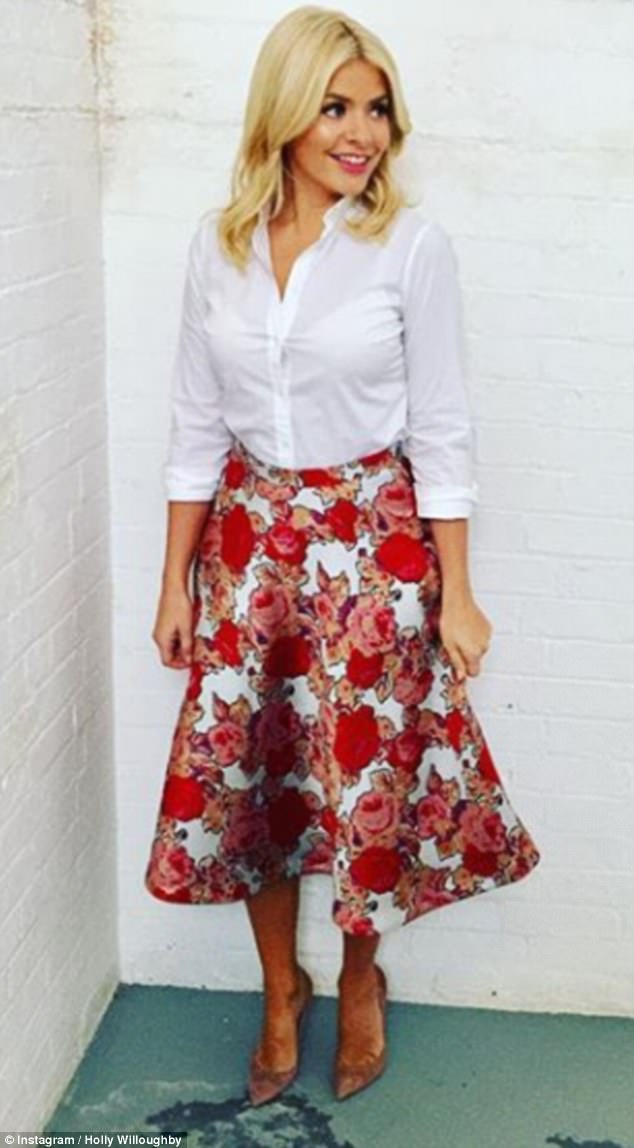 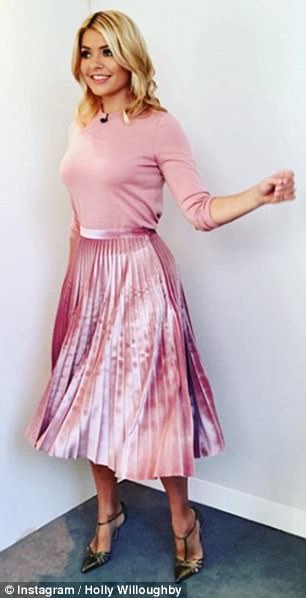 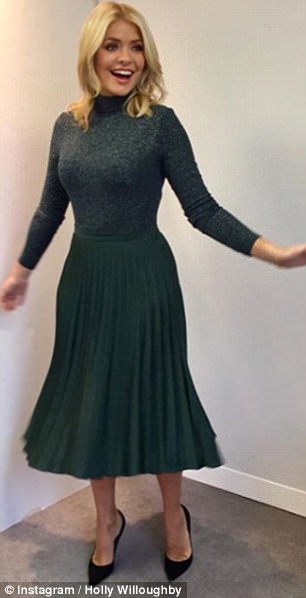 In December Holly’s look was criticised as ‘frumpy’ by her fans and since then the presenter appears to have been making more daring fashion choices. Pictured: Holly in December 2016

As part of the mother-of-three’s daily outfit documentation on Instagram, she posed a sneak-preview before heading to join Jonathon Ross for his show that airs on Saturday night.

Holly even enlisted the help of an assistant to shoot a quick video of her strutting away from the camera and turning around to give a little wiggle.

Fans were instantly enamored with the ensemble, with one person describing the dress as ‘perfection’.

The ITV star’s weight-loss has not gone amiss, and in this figure-hugging number showcases her svelte physique.

Holly’s style transformation has given the star a chance to showcase her noticeable weight loss of which she has remained fairly tight lipped. 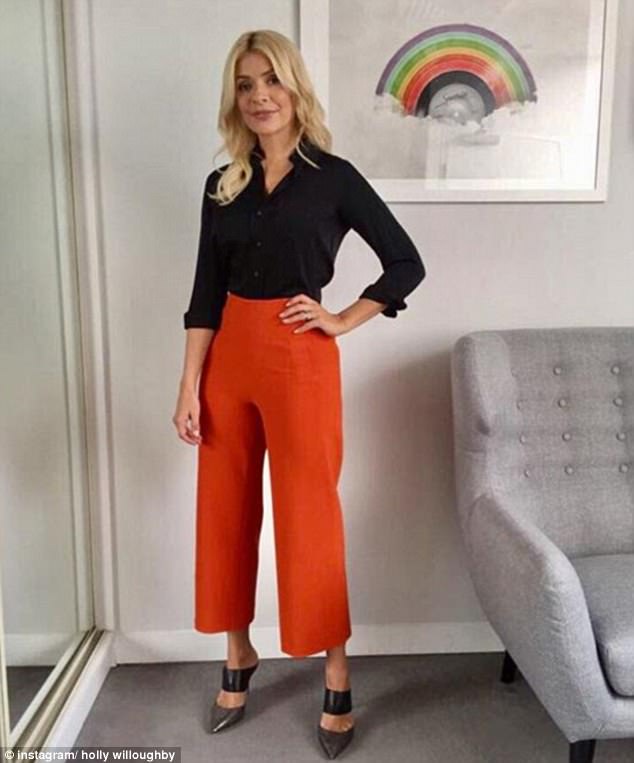 However, the mother’s new style choices have once again divided fan opinion with her burnt orange trousers labelled a poor choice by fans

Her previous style choices saw Holly typically opt for more modest ensembles than those we have seen of late and in December 2016 fans criticised her look as ‘frumpy’.

Holly posts a snap of her outfit every day on Instagram  before presenting This Morning, but her pleated skirts and jumpers were branded ‘dreadful’ and ‘frumpy’ by some unimpressed followers.

The Ashish dress is the latest in a line of daring new looks showcased by the star that have continued to divide opinion among fans .

The presenter was previously famed for selecting affordable high street pieces that were accessible to her fan base of British mothers, who often take to Instagram to ask Holly where she purchased her ensembles.

But several of Holly’s fans have admitted that they wouldn’t be willing to try out the look themselves.

On her most recent post one commented ‘only she could pull something this off’ while another added ‘How did you look so beautiful after kids – I just had my second and I am struggling to get back into shape.’

Her latest Instagram update comes as she continued to divide opinion, after posting a shot of herself wearing high-waisted burnt orange trousers.

A  number of her 2.5 million Instagram followers didn’t seem to enjoy her look for the day and encouraged her to revert back to her usual dress sense.

‘Sorry Holly don’t like you in trousers or leggings they don’t suit you sorry x’ wrote one fan with another adding ‘Love Holly, but dont like this outfit Im afraid x’

The divided opinion continued on Wednesday, as the This Morning presenter shared a snap of herself donning a chic floral-printed shirt dress that highlighted her svelter frame of late. 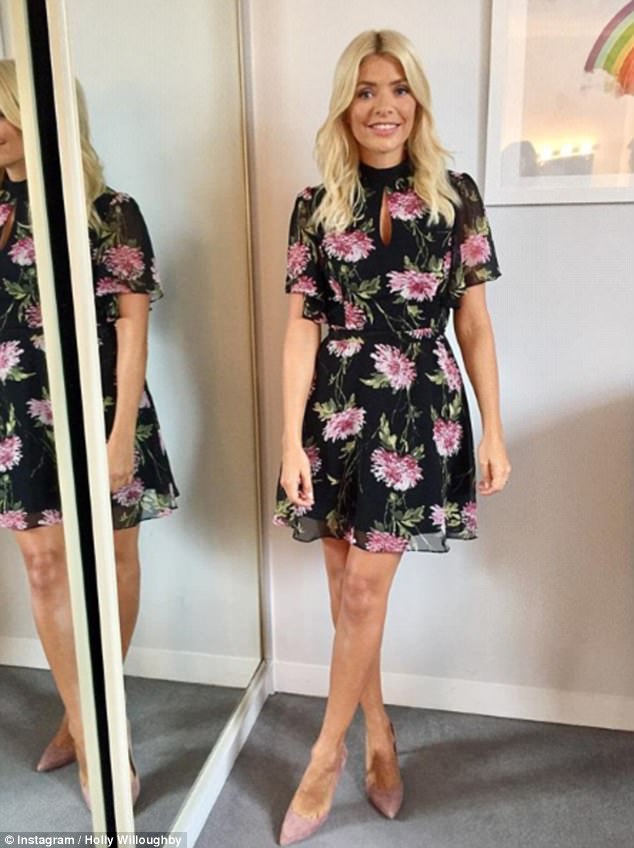 The blonde beauty appeared to be a hit, thanks to her latest sartorial offering, but found herself subject to comments about her figure, with some fans telling Holly they were missing her usually ‘curvaceous’ frame.

While fans may be struggling to get on board Holly’s new look it seems she is a hit with the fashion industry with stylist Simon Glazin slamming those who criticised her look.

He told the MailOnline: ‘She looks absolutely amazing, and I wish people would leave her alone.

‘She hasn’t lost too much weight, she isn’t too thin, and her switch up in fashion choices isn’t a signal she’s going mad.

‘She’s finally having fun with fashion, which is exactly what it’s there for. To express yourself.

‘Since when has showing off your newly slimmed down body a crime? And so she loves a sequin, big deal!’

‘Holly plays by the ultimate style rules when it comes to her fashion sense to keep her looking chic not cheap.

‘Sure she’ll opt for a super short skirt, but she’ll balance the look with a prim neckline, and she’ll always play to her strengths and draw attention to her best bits by wearing clothes which champion her hourglass figure.’