A Holocaust survivor has revealed how a daring nun saved her life and those of dozens of other Jewish children in occupied France during World War II.

Hélène Bach, now 90 and living in London, was 12 when her Jewish family were taken away by German troops from their home near Tours, France, during the German occupation of 1939 to 1944.

Under the regime of Marshall Philippe Petain, France was cut in two parts: the northern, occupied side, which was ruled by Germany; and the Free zone, where the Vichy regime would openly cooperate with the Nazis forces and let them seize Jewish families.

Speaking to the BBC, Hélène recounted how fearless Sister Denise Bergon helped hide 83 Jewish children from the German in her convent, including Hélène and her sister Annie.

At one point, when word reached the Germans that the convent was harbouring Jewish children, some of the youngsters hid in a 1.5 x 2.5m space in the chapel floor under a trapdoor for five days to escape detection.

Hélène Bach, left, now 90, was 12 when her Jewish family were taken away by German troops near Tours during the German occupation of France from 1939 to 1944. She and her sister Annie, right, now 94, were kept safe in a convent near Toulouse by brave nuns who defied the Nazis 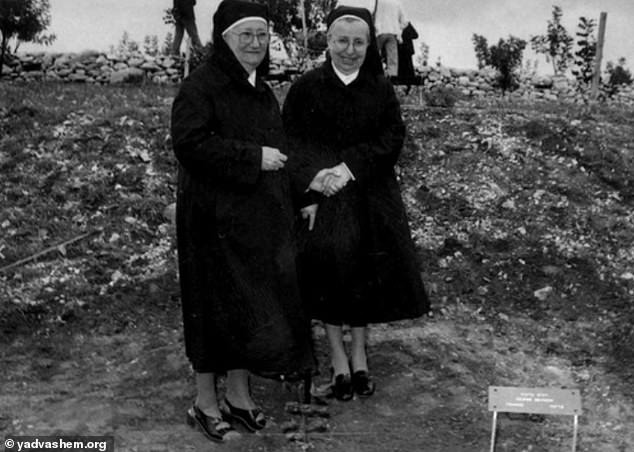 Denise Bergon, who died aged 94 in 2006, was later recognised as a Righteous Among the Nations for the many life she saved, alongside Sister Marguerite Roques, who helped her hide the children in their convent’s boarding school.

In 1942, Sister Denise was the young mother superior of the Convent of Notre Dame de Massip in Capdenac, 150km (93 miles) north-east of Toulouse.

The sister was spurred into action to help Jewish families in the region after the archbishop of Toulouse, Jules-Geraud Saliège, spoke out against the Vichy Government’s policy which let Germans seize Jews and take over their assets as they pleased.

The two women started to harbour children they would find hiding from the Nazis in the woods or around the convent, and would pass them off as their pupils.

They had to hide more children as round-ups by Germans or French collaborating with the Nazis intensified in the region, bringing the number of Jewish children hiding in the convent to 83. 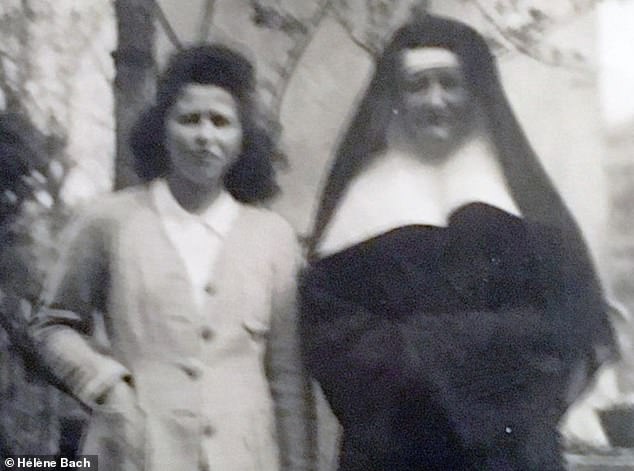 Annie as a teenager next to Sister Denise. Sister Denise was prepared to do anything to keep the children at the convent safe

Hélène’s family had moved from occupied Alsace Lorraine towards the south of France, which was a ‘free zone.’

Her father Aron and older sister Annie, who was 16, had already been arrested and were held in Tours.

Although they couldn’t see them, Hélène, her mother and her younger sister rented a house in order to be close by.

They had been there for a year when German officers came to their home looking for Jewish families to round up, and Hélène’s mother encouraged her to run away and hide in the woods. 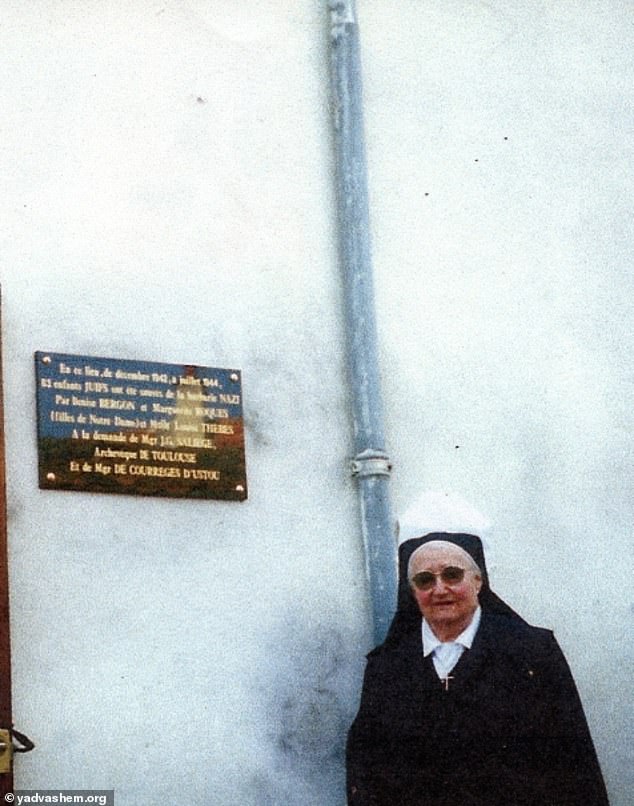 Her younger sister Ida refused to come with Hélène, 12, and so she let her go back to their mother. Hélène never saw her mother or sister again.

‘I always thought if my sister had not let go of my hand, she would have been in the convent with me,’ she said.

Hélène was taken to the convent by a member of the French resistance who had found her hiding in the woods.

There, she was reunited with her sister Annie, who managed to escape from the Germans, was taken to the convent by her aunt, with whom she had been hiding.

There, the children lived a normal life, doing their homework and playing. They lived underground, below the convent and its school. 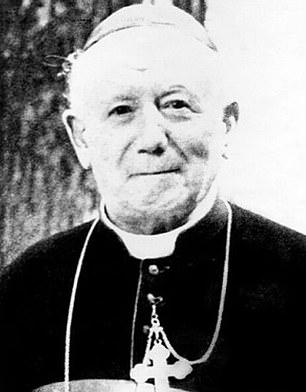 Albert Seifer, another Jewish refugee from Alsace Lorraine at the convent said it felt like a ‘fortress.’

‘We did not really feel the war despite the fact that we were surrounded by danger,’ he added.

Sister Denise kept a tight record of which children came from were and noted the Jewish children had become the convent’s children, and that the convent was ‘committed’ to take every risk necessary in order to keep the children safe from the Germans.

Marguerite Roques, who was the convent’s school director, was in on the plan and helped Denise hide the children along with the convent’s chaplain and two other sisters.

Because the children were Jewish and did not know anything about catholic faith, they were passed as communist children whose parents had rejected religion as a whole. 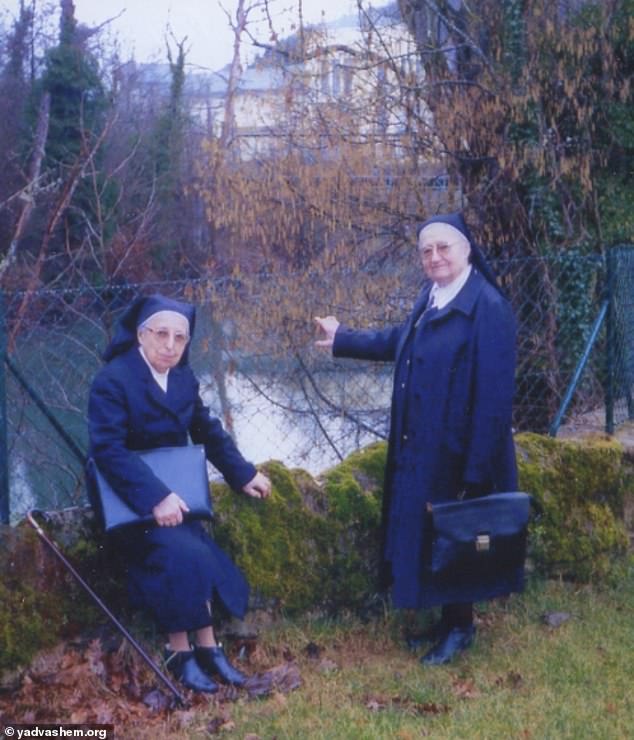 Sister Marguerite and Sister Denise in the 1990s. A cedar tree was planted at the convent to mark their efforts

Sister Denise wrote in her journal in 1946 that all the jewelry and documentation that had been sent with the children and could compromise their safety were buried in the grounds of the convent by the sisters at night.

As the war progressed, it became harder to protect the children. In 1944, news spread that the convent were harbouring Jewish children, and Sister Denise was informed just in time to act.

She made a plan with the Resistance, who were tasked with firign warning shots if German troops approached the convent.

She hoped it would give enough time for the Jewish pupils hiding to escape. She paired the youngest children with the older ones, who would have to act as guides. 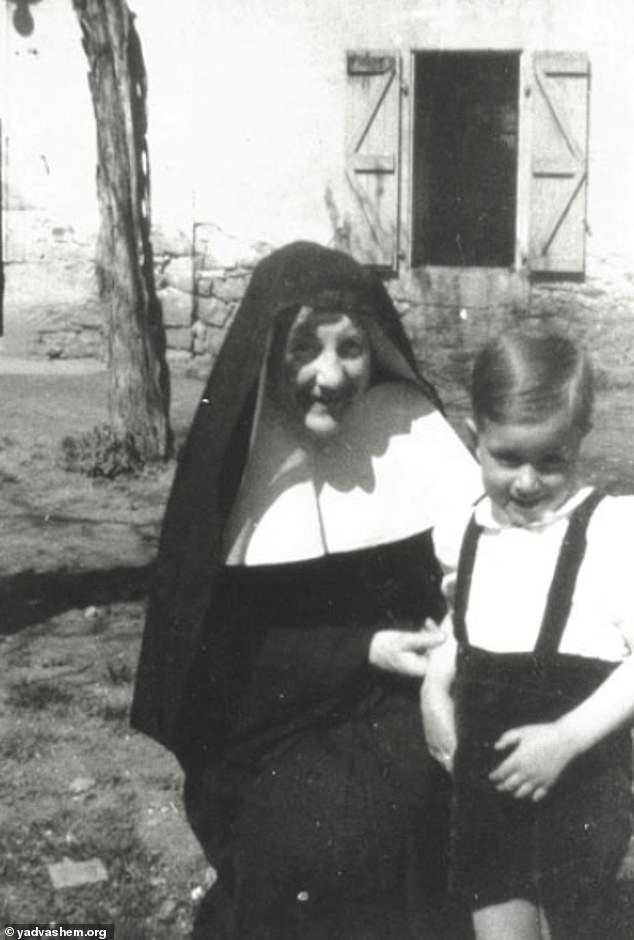 Sister Denise with one of the children she helped keep safe at the convent. She was honoured as a Righteous Among Nations in 1980 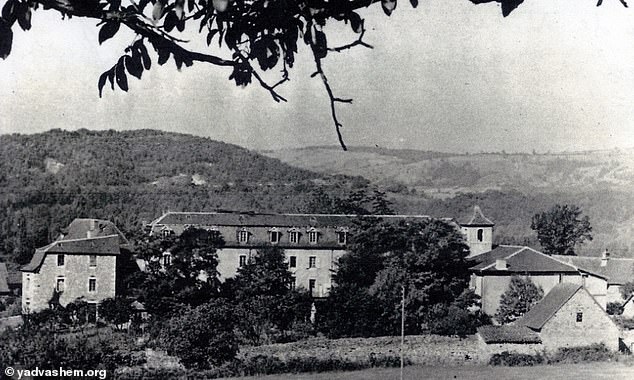 A view of the convent where 83 Jewish children were hiding during the war. The sisters pretended the children were communists refugees who did not know anything about religion

However, she changed her mind and decided to hide the children  in case the Germans paid the convent a visit.

Hélène’s sister Annie told the BBC the convent’s staff had built a trap door in its chapel. She remembered hiding from the German with another group of children.

‘The chaplain was strong and could lift the benches. He opened a trap door. We slid down in there,’ she said.

For five days, the children hid in the small space, which was 2.5m long and less than 1.5m high.

They would only be allowed out for short periods of time early in the morning.

The Germans never entered the convent, however, they left the corpses of members of the French resistance they had killed not too far away, setting an example to anything who would dare cross them.

The children eventually left the convent after the end of the war after the south of France was liberated in August 1944. 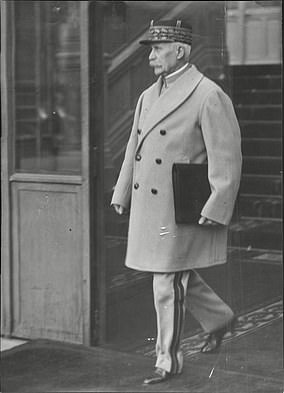 Nazi Germany took control of the Northern and Western part of France during the Blitzkrieg shortly after the start of the second World War.

Germany took two million French soldiers as prisoners of war and sent them to camps in Germany while France signed the Second Armistice of Compiegne.

The French government, headed by Marshal Philippe Petain, moved from Paris to Vichy, in the non-occupied part of France, in the South, which would be known as the ‘Free zone.’

Germany overlook the military Administration of Northern and Western France while the Vichy Government retained some authority in the Free Zone.

The Petain government collaborated with the Germans in order to retain governance of the rest of France. It has been discussed between Petain and Hitler themselves, who shook on it.

The Vichy government took active steps to get rid of what it called ‘Undesirables,’ which included Jewish, immigrants, communists or freemasons by organising round-ups which resulted in thousands of Jews being shipped away to death camps.

Between June 1940 and August 1944, 15,000 persons, mostly French Jews, were denaturalised due to change in the Naturalisation Laws that had been put in motion by the Vichy Regime. 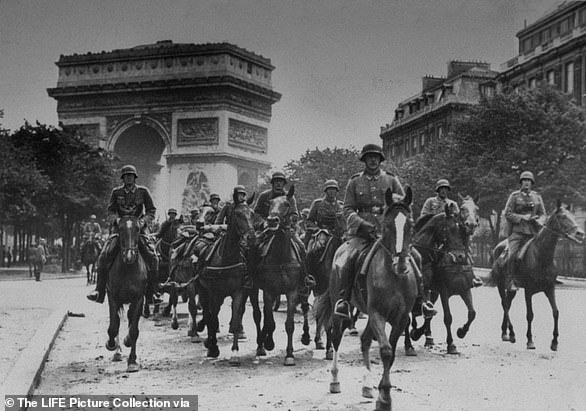 Hélène and Annie were crushed to find out their parents and younger sister had been killed in Auschwitz.

Annie settled and married in Toulouse, where she still lives. Hélène moved to Richmond, West London.

The two sisters travel to see each other as often as they can.

Sister Denise was made a Righteous Among the Nations by the Holocaust Memorial Center, Yad Vashem in 1980.

She helped disadvantaged children and refugees until her death in 2006, aged 94.

In April 1992, a cedar tree was planted in the convent to mark her act of heroism.