You know you’ve arrived somewhere special when you’re greeted by hundreds of yellow butterflies fluttering in the breeze.

We woke to this spectacle each morning during our stay at Eagles Palace Villas in the hills near Mount Athos in Halkidiki, northern Greece. Our villa was surrounded by gardens of lavender, thyme and rosemary, all swarming with insect life.

We had taken our two children to a place where the ancient and modern worlds collide. So, while we were relaxing in modern luxury, we could walk among the ghosts of ancient Greeks and Trojans.

Ancient vs modern: The 14th-century tower of Prosforio at Ouranoupolis

For our seven-year-old daughter, Saskia, recalling the mythical Gods of her storybooks, the swarm of butterflies weren’t just insects — they were the very same creatures that spilled out when Pandora opened her fabled box on Mount Olympus, just over 100 miles away.

Halkidiki, the three-fingered peninsula on the Greek mainland, jutting into the Aegean, is lush, green and forested, quite unlike the baking hot, dry islands.

Still, if you hanker after islands, this region has them in abundance with Mount Athos, the Holy Mountain, as a backdrop. One day we took a speedboat to Drenia Island, a small, rocky, Robinson Crusoe-type outcrop populated by just 27 goats.

The neighbouring island of Ammouliani, which means ‘sand’, is inhabited by 650 people and has private coves with the clearest water. Once owned by a monastery, the island was handed over to refugees from the Greco-Turkish war of 1919 to 1922.

Here, as we scooped up handfuls of sand from the seabed, the grains glittered like gold dust. ‘Earth’s pollen,’ said my wife.

Our boatman, Vassilis, was born and raised on Ammouliani. Tired of being a truck driver after seven years, he decided to come home.

When a solitary woman engaged Vassilis in conversation, he told us: ‘That’s my aunt. I have 51 cousins on the island.’ 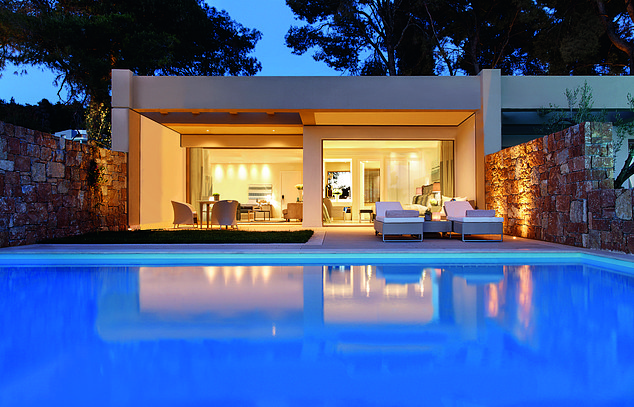 Chic: Pictured above is one of the luxurious Sani Club villas. There are 42 in total

Perched on the hillside above the hotel are 42 villas, each with their own pools and bird’s eye views of the sea. So, imagine our horror on discovering that our peace would be disturbed by an Essex wedding party.

‘What is an Essex wedding party?’ asked my son, Rafael, five. I explained they could rival Homer’s Greek warriors for exuberance and excess. In the event, our children made far more noise than the guests, squealing with delight each time they pressed the bell on the beach umbrella and a waiter appeared with slices of cool watermelon.

The hotel is popular with the Greek smart set who weekend here from Thessaloniki, Greece’s second largest city, a two-hour drive away. They come for the lush landscape, the spa and the two-Michelin-star restaurant.

We dined under the stars with Mount Athos watching over us. We even felt brave enough to try the local wine made by monks. But not brave enough to repeat the experience. It turned out to be sickly sweet. 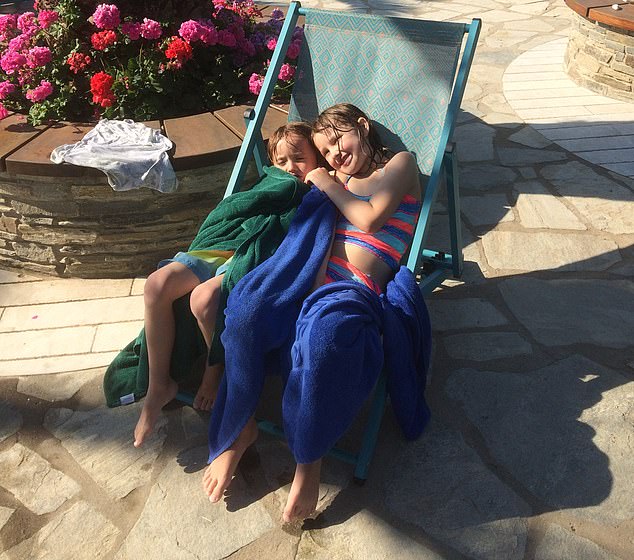 The nearby town of Ouranoupolis is the nearest you can get to the Holy Mountain, which is home to 20 monasteries and a place where women have been forbidden to set foot for 1,500 years. I took my daughter to the museum in Ouranoupolis, housed in a 14th-century tower. As we examined two helmets from the Persian war of 492 BC, we were followed by a vigilant member of staff. Perhaps he thought we were going to pinch their artefacts.

Our second stop on Halkidiki was on one of the other fingers, hopping over to Sani Club on neighbouring Kassandra.

After the intimacy of Eagles Palace, this resort felt overwhelming, with 24 restaurants from which to choose, including Greece’s only dedicated caviar restaurant. There was no danger of getting bored with so many activities on offer, including scuba diving and the less familiar concept of paddle-board yoga. Next month, the resort will open the Rafa Nadal Tennis Centre.

It really was luxurious: the spa had a children’s menu and even our rather pedestrian hot dogs came with black truffle mayonnaise.

After such an indulgent holiday, the Gods had had enough. Our flight back on a crowded budget airline was punishment.

How I envied those butterflies.

Inspiring Travel Company (01244 355527, inspiringtravelcompany.co.uk) offers a ten-night family trip to Greece this Easter from £4,095, including five nights’ B&B in a Junior Pool Villa at Eagles Villas Halkidiki, five nights half-board at Sani Club in a Junior Suite Grand Balcony Sea View, private transfers and return flights from the UK. Based on a family of two adults and two children.