A British-born joiner who received a ‘terrifying’ letter telling him to leave the country, has been told he can now stay, as the Home Office admits it bungled his application.

Shane Ridge, who was born in the UK to an Australian-born mother, was told he didn’t have a right to be in the country after he applied for Right to Abode.

But the Home Office has today admitted, just hours after his plea on television this morning, that it forgot to identify his British-born maternal grandmother.

Mr Ridge can therefore stay in the country, with no threat of deportation, but said he was not impressed by the hasty email apology after days of stress and confusion.

Sue Ebbs with her son Shane Ridge, who was told he does not have lawful basis to remain in the UK, on Good Morning Britain today. He has now been told he can stay in the UK 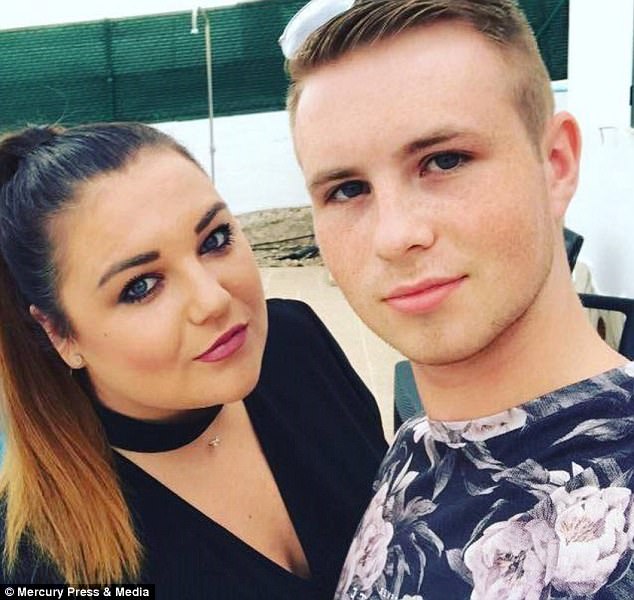 Shane Ridge, with his girlfriend Jodie. He received a Home Office letter telling him to leave the UK, even though he was born here. Now a second letter admits they made a mistake

He said: ‘It was a blunder on their part. They don’t even sound bothered really. The amount of stress and stuff I’ve been through, it’s horrible.

‘I can’t believe they are just brushing it under the carpet. Fair enough they have “sorted” it now which I’m really happy about but it’s a bit poor on their side.

‘I can’t wait to get home and give my family a big hug.

‘It’s blown my mind. I’m just so pleased it is sorted and want to thank everyone for the amount of support I received.

‘I’m annoyed that after all this stress and lack of sleep and panic, all it took was someone to ring me and say “sorry we missed something out” and I’m suddenly a British citizen.’

A Home Office spokesperson said: ‘We have now established that Mr Ridge is automatically a British citizen. We have spoken with Mr Ridge to apologise for this error and the distress caused.

‘When Mr Ridge applied for Right of Abode, we did not identify that his maternal grandmother was British and that as a result his mother had settled status in the UK at the time of his birth.’

Mr Ridge was born in Yorkshire, but his mother Sue Ebbs, who has dual citizenship, was born in the UK.

Her dual citizenship wasn’t enough to give him the right to stay in Britain on its own, because she wasn’t married to his father when he was born. 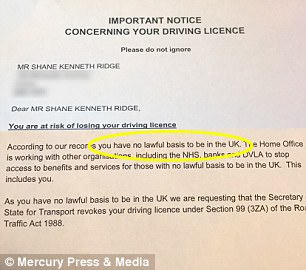 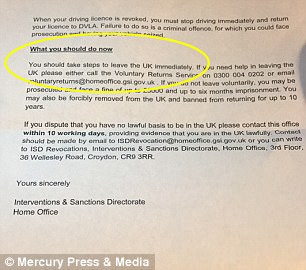 The Home Office letter says he has no lawful basis to be in the UK, and tells him to leave the country immediately 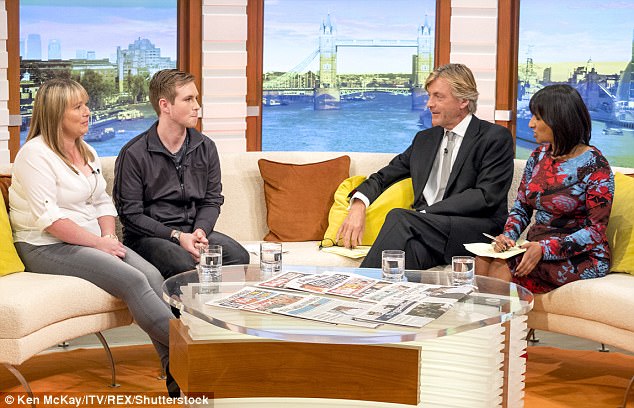 The mother and son explained that they have not heard about the future since the letter two weeks ago. Ms Ebbs said her other children have two passports, British and Australian

Last week, the 21-year-old got a ‘terrifying’ letter in the post from the Home Office, telling him he had ‘no lawful basis to be in the UK’.

Now, he said he is furious at only receiving a ‘quick apology’ via email from the Home Office for the mistake, which left his family and friends heartbroken.

His girlfriend, Jodie Singleton, had even set up an online petition which reached more than 2,000 signatures in 20 hours, calling for Mr Ridge to be allowed to stay in his home country.

He added: ‘I hadn’t actually made any plans to leave my job or say goodbye to friends and family because it was all too surreal.

‘I was just in denial, hoping it wouldn’t happen. I didn’t want to face the reality of it if it did.

‘I genuinely wouldn’t have known what to do. It would have truly broken me.

‘I haven’t eaten or slept properly for the past week since I received the letter. It has been horrible.’

‘All along I was thinking, “how is he not a citizen or why doesn’t he have right of abode?”

‘How quickly has this turned around? It’s unbelievable how someone failing to do their job right resulted in this.

‘I can’t wait to get him home and have a cup of tea and some cake.

‘It’s been such a stressful week. I’ve felt so hopeless but I’m over the moon.

‘In a way, I’m glad I have been off school due to the holidays. I wouldn’t have been able to cope – I’d have broke down in front of the children.

‘We haven’t had it in writing yet but I’m half excited. I can’t wait to get him home to the other children.

‘Shane paid a lot of money for the forms to be rejected. It should be refunded.’

And girlfriend Miss Singleton said: ‘Shane has tried his hardest in life compared to many people his age and they were throwing it back in his face. I don’t know what I would do without him.

‘They would be ripping us apart if they deported him, I wouldn’t have any rights to stay in Australia. This was literally my worst nightmare.

‘I’m really happy with the news but I’m still a bit shocked at the fact we have had to go to the media for the government to realise their mistake. I don’t think I could cope if he were to be send away.’

Speaking on the show, Ms Ebbs said: ‘I just don’t understand. My two other children have got British citizenship and Australian citizenship.

‘I’ve a little boy at six, me and his dad are still together, so because the law has changed, he can have it.’

Calling the letter and chain of events ‘bizarre’, she added: ‘I can’t understand what’s happening to my son.’

He told the show the Home Office had found him through the DVLA, but he couldn’t understand the timing, having had a provisional license since he was 16. 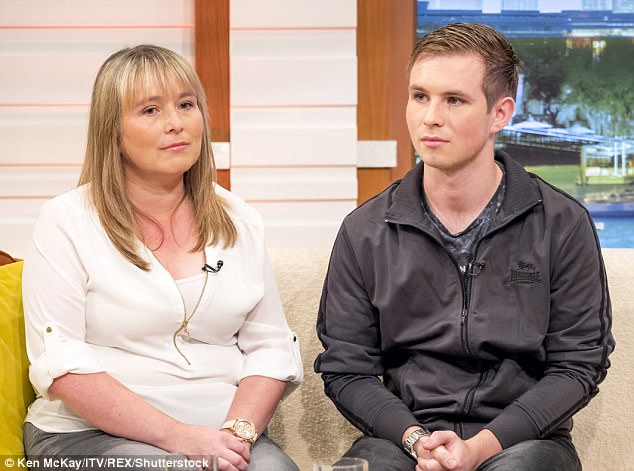 He told the show they had found him through the DVLA, but he couldn’t understand the timing, having had a provisional license since he was 16

Ms Ebbs explained if Mr Ridge had been born a year after he was, or if she had been married to his father, this conversation would not have been happening.

Because Mr Ridge’s parents never married, Mr Ridge does not have an automatic right to citizenship and must apply for his ‘right of abode’ under his father’s British citizenship.

However, the matter has now been resolved, as Ms Ebbs’ mother is a British citizen, giving her settled status.

UK law states that, if a child was born before July 2006, the father’s British nationality will normally only automatically pass to the child if he was married to the mother at the time of the birth.

Applications will usually be accepted if the child would have automatically been a citizen if their parents had been married.

Last week, he said: ‘It’s surreal. This is the only letter I have ever received in relation to me having to leave the country. It just came through my letterbox out of the blue.

‘The last bit scared me the most – “leave the UK voluntarily”. I’m speechless – I don’t know what I can say. 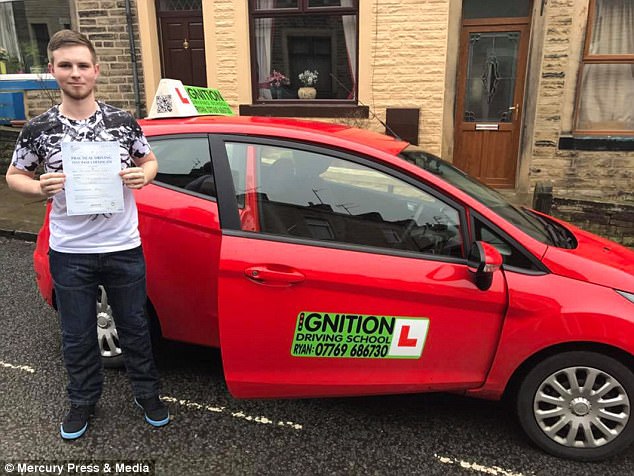 Despite six years working here, being educated here and even passing his driving test here, he has now been told by the Home Office that he is not a British citizen 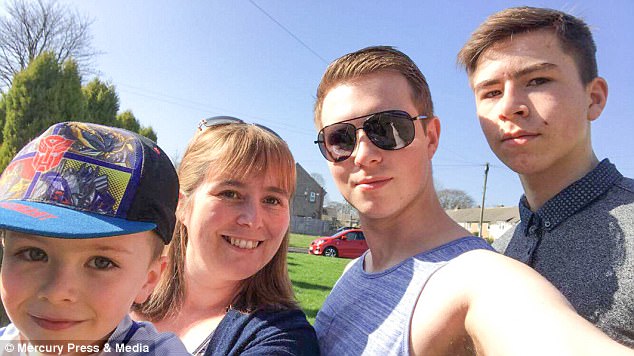 Above with brother Liam, mother Sue Ebbs and older brother Connor. He says he’s worried about his half-siblings, as his mother is not married to their father

‘I received the letter from Immigration Enforcement saying they were going to revoke my driving licence and I should leave the UK voluntarily or face a £5,000 fine.

‘I’m confused and worried that I’ll have to leave my entire family behind and move to a country that I don’t know.

‘I don’t understand it because I was born in the UK. I did my GCSEs here, I’ve worked for six years, I pay tax and national insurance.

‘Me and my girlfriend rented a house, I vote, I use the NHS and opened a bank account without any problems, ever.

‘I’ve had my car for five months and before that, I had a provisional licence since I was 17.

‘Nothing has ever flagged up that I don’t have British citizenship until I went to apply for a passport last year to go on holiday with my girlfriend and my application was declined.’ 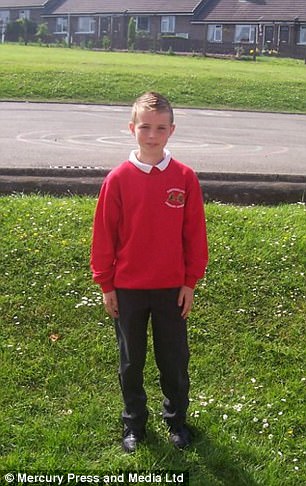 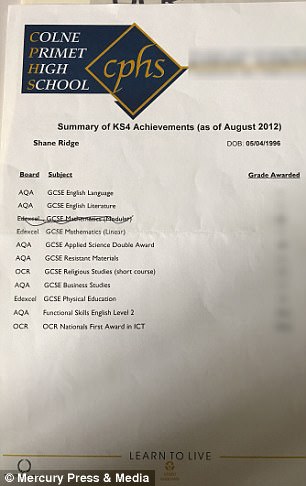 Mr Ridge, who was educated in the UK, and did his GCSEs here, shown right, has been left totally perplexed by the letter 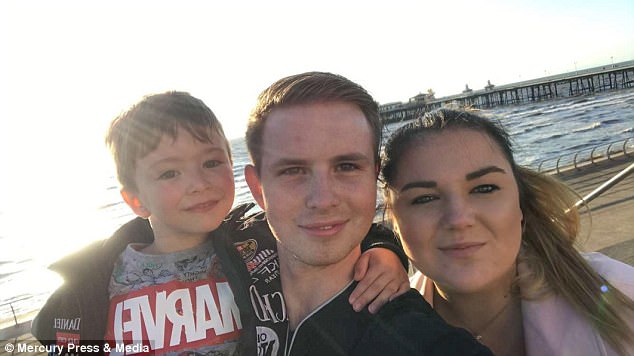 His girlfriend Jodie, pictured with him and little brother Liam, five, is furious about the letter. Mr Ridge is worried he will have to leave the country

Mr Ridge successfully applied for and holds an Australian passport, which he was granted after he tried to get a British passport but was turned down.

He has travelled abroad with it, but had to have a temporary solution for returning to the UK with it when he got home, which he negotiated with the passport office in Liverpool. He says he had no idea until this letter that he was not classed as a British citizen.

The law on citizenship in Britain

But, if you were born before July 2006, your father’s British nationality will normally only pass to you if he was married to your mother at the time of your birth.

It meant that if your parents weren’t married, you must apply to register as a British citizen.

Applications will usually be accepted if you would have automatically been a citizen had your parents been married.

The letter he received last week, declares that the Home Office is working with the DVLA, NHS and banks to ‘stop access to benefits and services for those with no lawful basis to be in the UK’ – before writing bluntly: ‘This includes you.’

It also stated that his driving licence will be revoked and that he must stop driving immediately.

Mr Ridge said: ‘I applied for an Australian passport and was accepted because my mum was born there, despite both her parents being British, and therefore she has dual citizenship.

‘I went to apply for right of abode myself after receiving this letter and was told by the Home Office that I need to apply for British citizenship first before I can do that.

‘I just don’t understand how they’ve just got through to me now.

‘I even have a birth certificate with my dad’s signature on it – he’s British.

‘If I cannot get dual citizenship or right of abode, or if this isn’t a mistake, I don’t know what I’ll do.’ 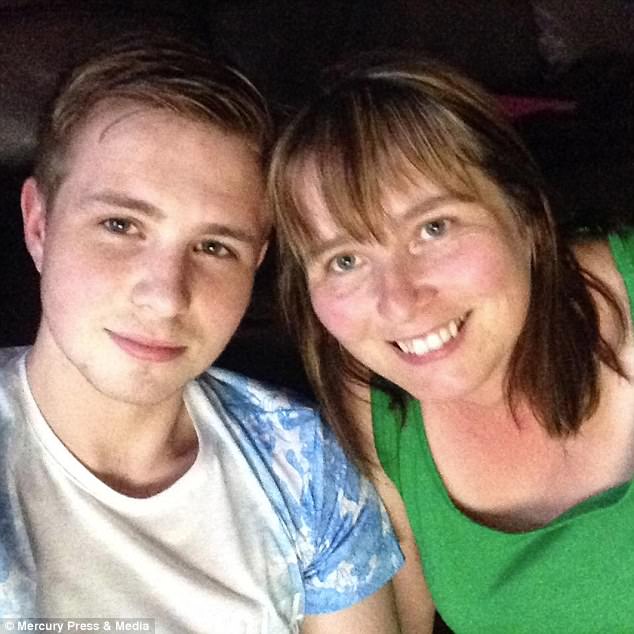 Mr Ridge with his mother, Sue, who was born in Australia, and has held dual citizenship with the UK. He has been able to get an Australian passport but not a British one