Home Secretary Amber Rudd has tonight resisted calls to quit saying she is ‘sorry’ for not being unaware of documents which set out immigration removal targets.

Ms Rudd said she had not seen a leaked internal memo referring to the targets – even though she had been copied in.

However she acknowledged that the disclosure had raised ‘legitimate questions’ and said she would be making a statement to MPs on Monday.

Her statement, in a series of tweets, followed accusations that she had misled Parliament after she told the Commons on Thursday that she had never agreed to specific targets for removals.

She wrote on Twitter: ‘I will be making a statement in the House of Commons on Monday in response to legitimate questions that have arisen on targets and illegal migration.

‘I wasn’t aware of specific removal targets. I accept I should have been and I’m sorry that I wasn’t. I didn’t see the leaked document, although it was copied to my office as many documents are.

She added: ‘As Home Secretary I will work to ensure that our immigration policy is fair and humane.’

The response comes after an explosive memo has emerged which suggested Amber Rudd was told about illegal immigrant removal targets, despite telling MPs otherwise.

The leaked memo was sent to the Home Secretary and Immigration Minister Brandon Lewis said officials had set a  ‘a target of achieving 12,800 enforced returns in 2017-18’.

It also boasts that ‘we have exceeded our target of assisted returns’ and that progress had been made on achieving the 10 per cent increase in deportations they had promised Ms Rudd.

It adds that progress has been made on a ‘path towards the 10 per cent increase’ in the numbers deported as promised to Ms Rudd.

The memo, leaked to The Guardian, appeared to contradict evidence she gave to the Home Affairs select committee just three days ago when she said she was not aware of any targets.

Grilled by MPs on reports that there were targets, she told the committee ‘we don’t have targets for removals’, adding ‘that’s not how we operate’.

A Home Office source told the newspaper: ‘We were gobsmacked by what she said, and that she stuck to her guns.

‘It is inconceivable that Amber Rudd did not know about the targets.’

Ms Rudd is battling to cling on to her job after a torrid couple of weeks following the Windrush scandal.

The fiasco saw immigrants who arrived from the Caribbean and have lived in the UK for decades threatened with deportation.

They told how they lost their jobs, homes, were denied health care and stopped from going to their relatives’ funerals and weddings because they did not have proper paperwork.

Labour’s shadow home secretary Diane Abbott said she should resign and the SNP have  joined in the calls for her to go.

Ms Rudd has insisted that she is determined to reform the Home Office – distancing herself from Theresa May’s policy to create a ‘hostile environment’ for illegal immigrants.

And while she has refused to say if she has considered quitting over the scandal, she insists that she is the right person to reform the department.

But the six page memo, which was prepared by Hugh Ind, the director general of the Home Office’s Immigration Enforcement agency, deals her account another blow.

And it has renewed calls for her to be sacked over the fiasco.

Ms Abbott said: ‘Amber Rudd either failed to read this memo, and has no clear understanding of the policies in her own department, or she has misled Parliament and the British people.

‘Either way, she needs to accept responsibility and resign immediately.’ 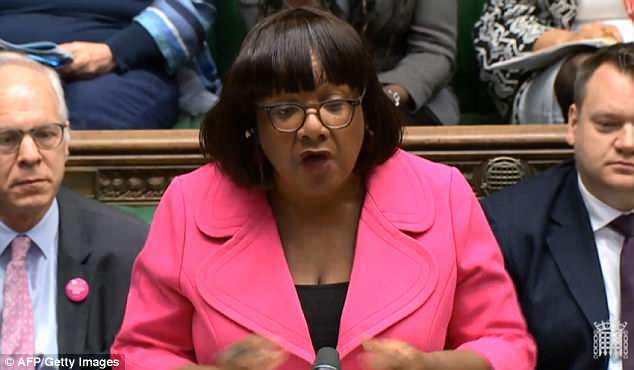 But Lord Blunkett, a former Labour minster, has said Labour should back Ms Rudd to stay because she is one of the Cabinet’s leading anti-Brexiteers.

He told BBC Radio 4’s Today Programme ‘imbalancing’ the Brexit balance in the Cabinet ‘would not be in the best interests of the country’.

‘I think she needs to get her act together,’ he added.

‘On a purely party political old-style jungle fight, if I thought this would actually change the Government then I might consider it, but actually I don’t believe it would.

‘I think it would be damaging to those of us who want at least some sane voices inside the Cabinet.’