Homeowner who killed a drunk burglar cleared of murder

A homeowner, who killed a drunk burglar by stabbing him 50 times after he caught him trying to steal his TV, has been cleared of murder.

Errol Hanson, 51, from Catford in south-east London, knifed Mohammed Savare in early hours of the morning on June 19.

Mr Savare, 26, bled to death within minutes, after receiving 30 stab wounds to the neck alone.

He had staggered through Hanson’s open front door, after a night drinking. Hanson was outside his home on Brownhill Road when Mr Savare slipped in unnoticed.

He returned to find Mr Savare standing in his living room, clutching his TV and with his mobile phone in his pocket.

Errol Hanson, 51, knifed Mohammed Savare, 26, over 50 times in his garden after finding him clutching his TV in the early hours of 19 June, Southwark Crown Court (pictured) heard

After a violent struggle in the kitchen, Hanson managed to lock Mr Savare outside, then fetched a knife before repeatedly stabbing the intruder on his patio.

Hanson denied murder and a jury of six men and six women at Southwark Crown Court cleared him, after deliberating for less than six hours.

After hearing the verdict, he then turned towards the public gallery and gave a single thumbs up to a weeping supporter.

Judge Michael Grieve, QC, thanked the jury for their ‘conscious work’ and told Hanson: ‘There is no longer any reason for you to be detained.’

He added: ‘You have been found not guilty, you have been acquitted and will be released from custody dependant on any medical provisions, that is not a matter for the court.’

The jury was not asked to deliberate an alternative charge of manslaughter.

‘He does not leave,’ he said. ‘Errol Hanson does the best in the circumstances to get him out of his flat.’

‘He did the best he could, he grabbed him, he tried to force him out down the corridor.

‘Errol Hanson has responded, but the momentum of the struggle takes them into the kitchen. Errol Hanson has done nothing to deserve this, he does not even have any shoes on. 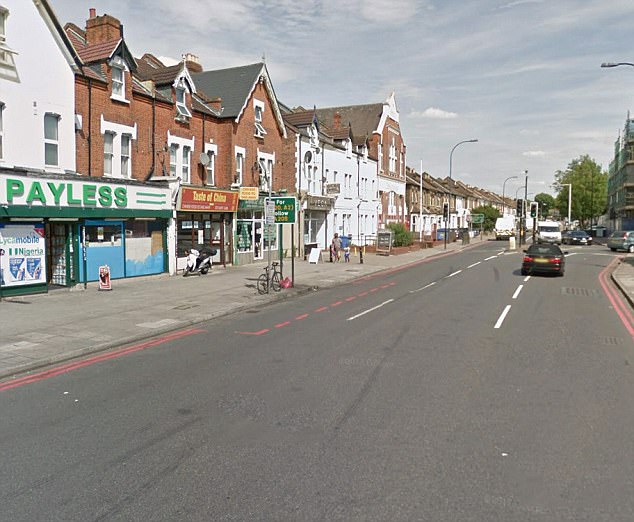 Mr Savare had staggered through Hanson’s open front door, after a night drinking. Hanson was outside his home on Brownhill Road when Mr Savare slipped in unnoticed

‘He has the presence of mind to open the patio door, Mr Savare’s behaviour defies all rationality. We know from his previous convictions the relentlessness of his violence towards resistance.

‘This is absolutely consistent with how he has behaved in the past.’

Lisa Wilding QC, prosecuting said Mr Savare was left with more than 50 stab wounds to his body of which, 30 alone were to his neck.

‘Mohammed Savare had fallen asleep nearby under a park bench close to this address having seemingly collapsed there drunk.

‘He awoke and staggered down a road on which this defendant lived. Errol Hanson was up at that time of the morning as he is a poor sleeper.

‘Whilst he was outside and unbeknown to him, the deceased – seeing the street door open – wandered into the flat where he proceeded to set about stealing the TV that was in Mr Hanson’s living room.

‘Mr Hanson walked back into his flat and confronted the intruder. What happened then is known only to two men, one of whom is dead.

‘This defendant says that they struggled and he managed to get the intruder into his back garden.

‘He then went back into the flat and took up two knives which he took back outside with him.

‘The defendant accepts that he stabbed Mohammed Savare but maintains that he did so in self-defence.

‘The prosecution say that his actions were in fact neither necessary to defend himself, as the intruder was by now outside the property, neither were they reasonable, and were therefore not done in lawful self-defence.’

Hanson told police that he felt terrified and was trying to get the intruder out of the house.

He alerted authorities after running into a newsagents next door, telling staff ‘someone came to my house and beat me, please quickly call the police’.

Describing the moment of the stabbing, Mrs Wilding said: ‘He was scared and shouted at him to get out of his house. He couldn’t see if the man had a weapon.

‘He explained that Mr Savare dropped the television and head-butted him and punched him in the face.

‘The defendant then got the intruder in a bear hug as he felt terrified and was trying to get him out of the house.

‘The two of them struggled in the course of which a radiator came off its hinges in the hallway and in the kitchen they knocked into the fridge which caused some miniature bottles on top of it to fall down.

‘He went on to explain that he managed to get the intruder outside onto the patio and then returned inside and got hold of two knives before returning outside with them in his pocket at which the intruder punched him again and was being aggressive and violent.

‘Mr Hanson said that he then took out one knife and stabbed the man in the throat.’