Armed man, 55, is shot dead by his estranged wife’s family after he broke into Florida home where she had fled to escape their ‘horrific marriage’

Police have said a homeowner who shot dead a man familiar to him after he broke into his home, was using his second amendment right to protect himself and his family.

Home intruder Ronald Fleet, 55, was killed Saturday after he kicked in the door of a property on Sunset Lakes Boulevard in Land O’ Lakes, Florida, prompting the resident to open fire, according to authorities.

Fleet fired back but then retreated and homeowner stopped firing, according to cops.

However Fleet, armed with a .380 caliber weapon, returned and ‘starts charging into the house,’ around 12.30pm and that’s when he was fatally injured the intruder.

Family members were present inside the house but no one else was injured.

Authorities didn’t identify the homeowner or anyone else who was inside the house at the time. 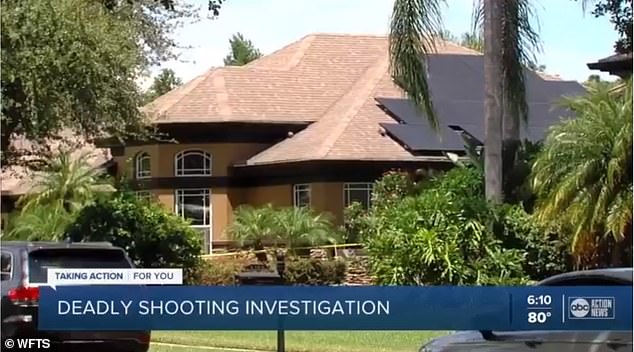 Fleet had kicked in the door of a property on Sunset Lakes Boulevard in Land O’ Lakes, Florida

‘He was defending himself and his family,’ Pasco Sheriff Chris Nocco said.

‘Any loss of life is tragic, but the victim was utilizing his Second Amendment right to protect himself and his family form the fear of Ronald who was carrying a gun and kicking in the door. I can’t imagine the fear they were going through.’

Police didn’t say what kind of weapon the homeowner used or how many times it was fired.

According to police, Fleet was angry that the resident was supporting his estranged wife amid their divorce proceedings.

The homeowner is related to Fleet’s estranged wife and authorities said the family was trying to help her get out of the ‘horrific marriage.’

‘We believe that the motive and his rage was that he was upset this family was supporting his estranged wife during the divorce proceedings,’ Nocco said.

The state attorney’s office is currently investigating the incident.