Homeware retailer is ridiculed for selling TWIGS online for £40

Will they make a bundle? Homeware retailer is ridiculed for selling TWIGS online for £40 to ‘bring a rustic quality to your home’

A upmarket clothing and homeware retailer has been ridiculed for selling a bundle of twigs for £40 to ‘bring a rustic quality to your home’.

The handful of birch twigs, wrapped in two pieces of brown string and measuring 31in (80cm) by 5in (13cm), are being sold by American outlet Anthropologie.

Underneath the branches, the description reads: ‘If you’re looking to bring a rustic quality to your home, then this bundle of birchwood is the perfect piece for you!’ 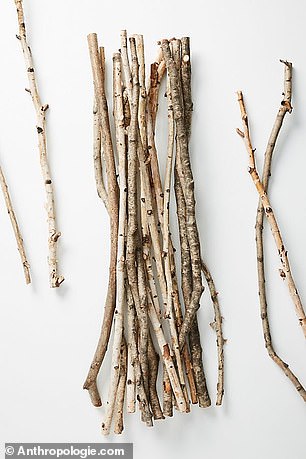 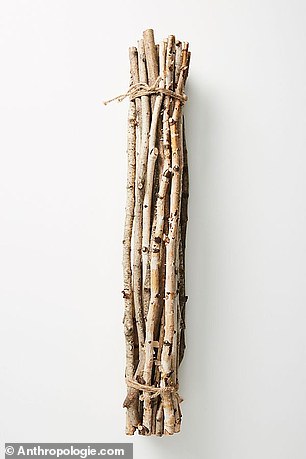 The bundle from US brand Anthropologie comes with 18 twigs – which makes it £2.22 per twig

The ‘Decorative Birch Bundle’ has no reviews and is available in one size and one colour. The bundle comes with 18 twigs – which works out at £2.22 per twig.

Facebook user Gem Redmond-Mundy saw the funny side of the bundle and posted a picture of it online with the caption: ‘My garden’s worth a fortune!’

Richard Shakespeare said: ‘£40 for some sticks?! My children could harvest a field in about an hour, we’d be loaded!’

And Barbara Harnisch posted: ‘A lot of birch twiggy stuff is available. My neighbour had a couple of logs stood on end in a basket outside her front door. Had some fake flowers, too. I am far too obtuse to understand.’

According to the brand’s website, they carefully curate a collection of ‘unique furniture’ to ‘inspire everyone to live and dress beautifully’.

A spokesman for Anthropologie has been contacted by MailOnline for comment.

But the pieces of plain firewood – which were jazzed up with yellow, pink or orange paint – proved so popular over Christmas that the store continued to stock them.

Some people compared the sale of the logs to the Harry Enfield sketch ‘I Saw You Coming’, where his antique salesman flogs rubbish to gullible rich women.