Today’s problems at container ports including Felixstowe, Southampton and London Gateway are being caused by a series of problems occurring at once which are not all unique to the UK.

A new lorry booking system has been causing disruption at Felixstowe in recent weeks, but trade body Logistics UK played down this issue today, saying the new arrangements were ‘bedding in’.

Industry insiders say there are three key issues behind the chaos:

The system for shipping goods around the world stopped working properly when economies shut down and reopened at different times as they dealt with Covid.

This led to shipping firms falling behind when it came to retrieving empty containers from European ports and taking them back to the global manufacturing hubs in Asia.

The shortage in shipping containers is being exacerbated by a lack of staff across the global supply chain – including sailors, hauliers and warehouse workers – due to people falling ill or having to quarantine.

The problems caused by Covid have been compounded by a surge in demand caused by:

If the UK leaves the EU with no deal, then at the end of the transition period tariffs will be applied to imported goods according to World Trade Organisation rules.

Companies are therefore stockpiling goods out of fear of having to pay tariffs, or because they are concerned that new customs procedures after Brexit will delay imports.

There is always a spike in demand for goods around Christmas, which is exacerbating problems.

Christmas presents may go undelivered and food go off at the dockside due to chaos at Britain’s container ports caused by a perfect storm of Covid, the festive rush and Brexit stockpiling – which has already forced Honda to pause car production at its Swindon factory.

Containers are piling up at Southampton, Felixstowe and London Gateway amid a global shipping crisis that has led to the cost of transporting goods from Asia soaring by as much as five times.

Covid has disrupted global freight schedules and sparked a shortage of shipping containers, but the issue is now being compounded by a surge in demand for imports due to Christmas and stockpiling by firms worried about No Deal tariffs.

Today Michael Gove insisted the crisis was not just down to Brexit, telling BBC Radio 4: ‘This is a global situation.

‘Sometimes people use the excuse of ‘Oh, Brexit ate my homework, it’s all because of Brexit’ when there are other factors at work.’

Today the Food and Drink Federation warned that ‘ambient food’ supplies stuck in containers and lorries are on the verge of passing their sell-by dates.

But fresh food imports will not be affected, as container ports handle non-perishable products that are shipped long-range from factories in China and south-east Asia.

Nor will imports of the Pfizer vaccine from Belgium be hit.

Adam Russell, who imports home appliances for London-based One Retail Group, said the situation was ‘scary’.

He warned that is is now ‘near impossible’ to get goods out of China now because fewer vessels than normal are sailing to the UK and there’s also a shortage of empty containers ready to be filled in Chinese ports.

Honda’s Swindon factory is responsible for production of the Civic, a spokesman for the Japanese car giant said it hoped to reopen ‘as soon as possible’ 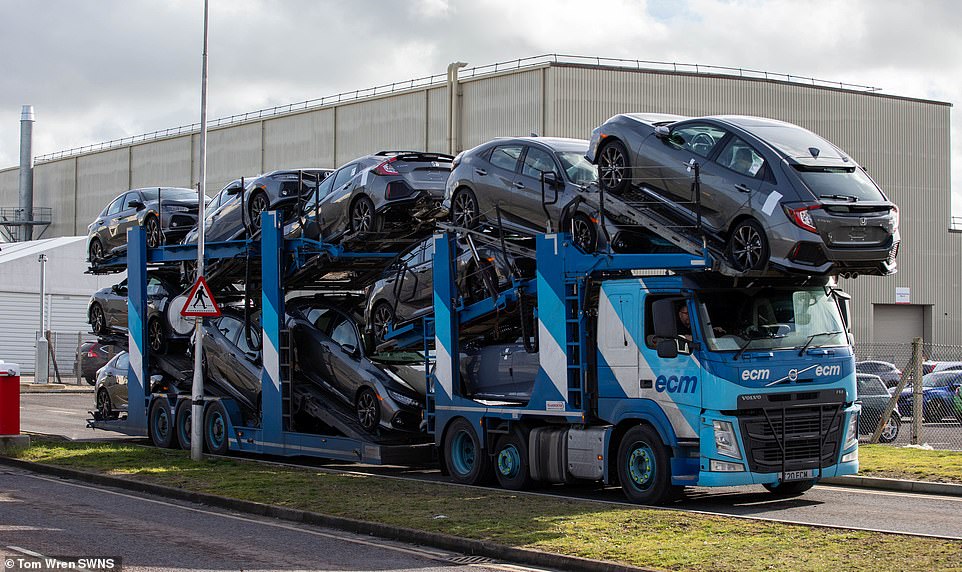 Alan Joseph, from the Cotswold Company, which sells, homewears and furniture, explained the issues facing firms.

‘We have long international supply chains and particularly those from Asia into the UK are being disrupted at the moment,’ he told BBC Radio 4’s Today programme.

‘It is very muddled. We keep quite close to where all our shipments are. But knowing how long items will take requires information from the people bringing them, but they don’t know either.’

Honda today has halted production at its Swindon plant, which is responsible for production of the Civic model, because of the difficulties in sourcing parts.

The plant will permanently close in July next year with the loss of 3,500 jobs.

A new lorry booking system has been causing disruption at Felixstowe in recent weeks, but trade body Logistics UK played down this issue today, saying the new arrangements were ‘bedding in’ and other factors were more significant.

‘You’ve got the Christmas rush, it’s always a busy time in logistics, you’ve got coronavirus which is still causing supply chain disruption, not only in the UK and Europe but around the world, and now you’ve got customs, or rather the uncertainty around customs,’ he said.

‘Businesses are taking commercial decisions around when to move their goods in and out of the UK in case there is no deal.

‘There’s an imbalance of containers, this is really invisible to the every day punter, but it really is about these big boxes that are used to move goods around.

‘This whole year has seen disruption in the container shipping market due to the initial shut down of production in China, then the restart. 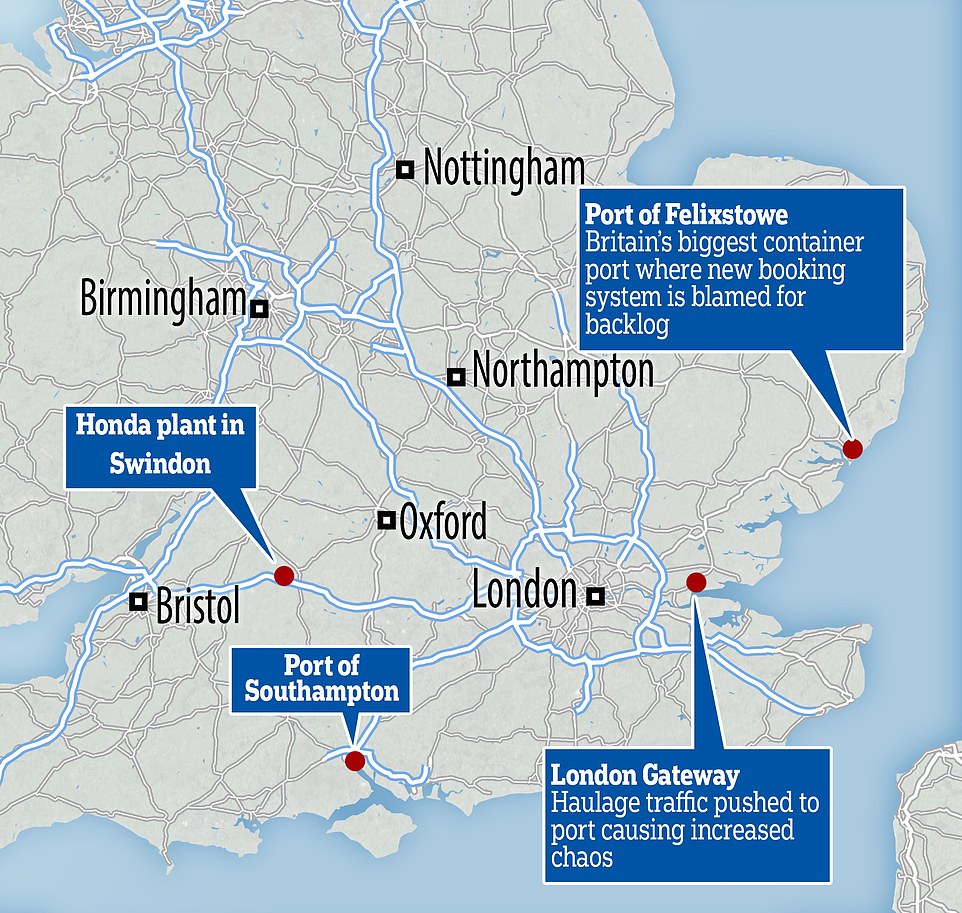 In a letter to Transport Secretary Grant Shapps, the leaders of organisations such as the UK Major Ports Group, the UK Chamber of Shipping and Logistics UK wrote: ‘Although we are hopeful that the current peak of port congestion has passed, high volumes remain and could persist for some months, running into the period of the end of the EU transition.

‘Therefore challenges remain. The current situation has arisen in part from imbalances that accumulated over months. Reversing this accumulation is not an overnight task.’

The letter called on the the Government not to be ‘complacent’, and called for it to provide ‘sensible flexibilities and easements’ around the movement of containers at ports and road haulage.

The Department for Transport said partners across the Government are working closely with the freight industry to resolve challenges in the global container system.

UK Major Ports Group chief executive Tim Morris said: ‘The Covid-19 pandemic has caused unprecedented volatility in global supply chains. The impact is being felt across the world, including here in the UK.

‘The situation at the UK’s ports is improving following commitment of extra resources, working closely with customers and ports across the UK taking on more traffic.

‘However, we are not complacent. Improvements at UK ports will take time to work through supply chains, they remain very busy and the underlying problem is global.’

The Port of Felixstowe said: ‘We, like other major container ports worldwide, is still experiencing a spike in container volumes and dealing with the consequences of the ongoing Covid pandemic.

‘In addition we have had a high number of slow moving containers of PPE occupying storage space.

‘The current high volumes are expected to last into the New Year and we are working hard to minimise the impact on daily operations and to maintain vital supply chains.’

Honda said : ‘The situation is currently being monitored with a view to restart production as soon as possible.’ 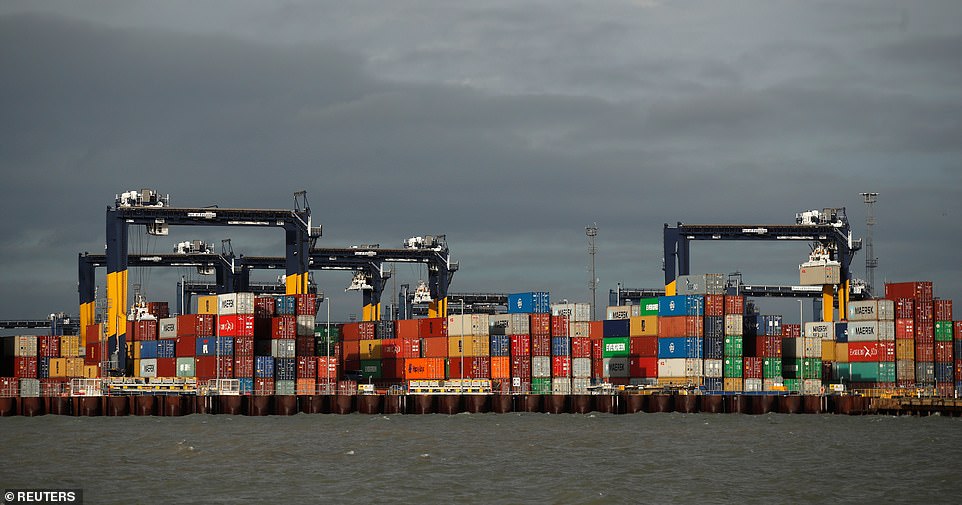 Disruption brought about by the coronavirus, uncertainty over Brexit and a much-maligned booking system at the Port of Felixstowe (pictured) have all caused delays on goods being imported into Britain 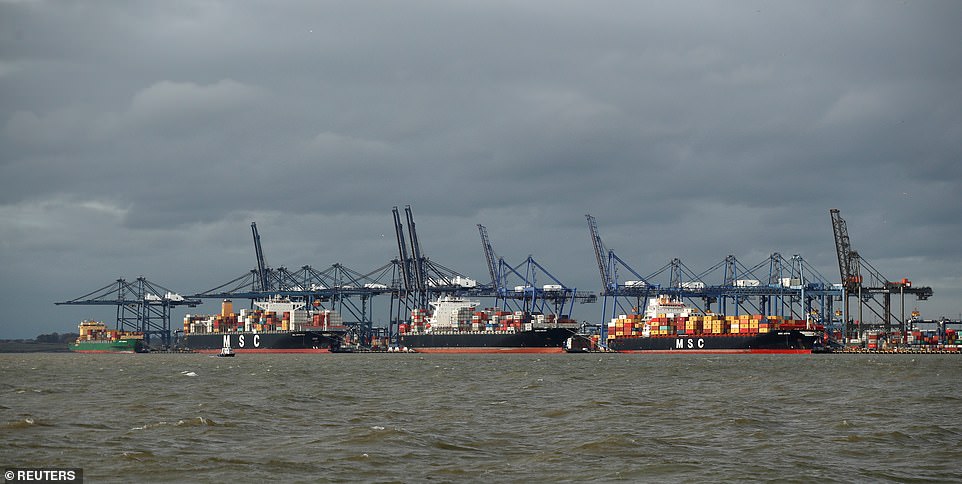 Cargo that is unable to to arrive at British ports is usually ferried to a large nearby ports such as Rotterdam and later returned to Britain, causing additional delays