Japanese car maker Honda is set to close its Swindon factory in 2022 in a move that will put 3,500 jobs at risk.

The firm will announce the closure of its Wiltshire plant tomorrow in a fresh blow to the country’s automotive sector amid rife uncertainty surrounding Brexit.

The plant is among the biggest employers in Swindon, which voted in favour of leaving the EU, and is currently the firm’s only factory inside the EU.

Bosses at Honda, Britain’s fifth largest car producer, recently declared that the UK crashing out without a deal would cost them ‘tens of millions of pounds’.

However just six months ago the firm had also insisted it was ‘right behind’ the Swindon plant and would not move it out of the UK.

It is the latest blow to hit Britain’s car manufacturing industry, with several international firms threatening to close plants amid Brexit reservations.

Japanese car maker Honda is set to announce the closure of its Swindon car plant in 2022 (pictured), putting 3,500 jobs at risk

In December, Nissan announced it would no longer build its X-Trail car at its plant in Sunderland and Jaguar Land Rover recently said it would cut 4,500 UK jobs.

Meanwhile, Ford bosses have warned a no-deal Brexit would be ‘catastrophic’ and would cost them 1,000 jobs – mainly at its Bridgend plant in Wales.

He added: ‘If these reports are confirmed, this would be a shattering body blow at the heart of UK manufacturing.

‘The car industry in the UK over the last two decades has been the jewel in the crown for the manufacturing sector – and now it has been brought low by the chaotic Brexit uncertainty created by the rigid approach adopted by Prime Minister Theresa May.

‘We are seeking urgent clarification from Honda on the implications of these serious reports.’

Speaking today, Swindon’s Conservative MP Justin Tomlinson insisted the decision was not down to Britain’s departure from the EU.

The North Swindon MP said: ‘Honda’s decision to close its Swindon plant by 2022 is “based on global trends and not Brexit”.

The Swindon Honda plant produces around 160,000 Civics, 90 per cent of which are exported to Europe and the US.

It has been running for more than 30 years and has been described as ‘integral’ to the local economy.

Local people reacted to the speculation today – included one worker who said he only found out on the news. 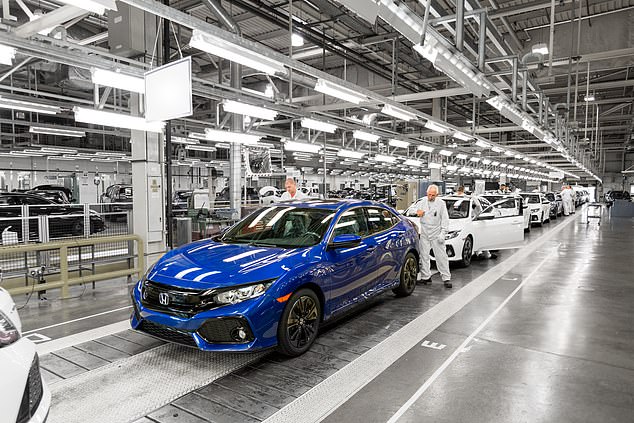 Workers are pictured here inside the Honda manufacturing plant in Swindon, Wiltshire

Dave Durston wrote: ‘Oh dear!! If This is true it will be devastating to Swindon employment, it’s not just the 3500 that work for Honda, there’s at least double that amount that work for subsidiary companies that supply part and materials! However, rumours are just that till confirmed.’

Jay Carroll wrote: ‘Welcome to Brexit Britain. As a Remainer I take no pleasure whatsoever in being proved right.’

Another said: ‘This is bloody awful! I hope the Govt wakes up – puts the national interest above ideology and does everything it can to avoid a no-deal Brexit.’

Ian Howells, senior vice president for Honda Europe, said in September that the firm was ‘right behind’ its employees in Swindon.

He added: ‘The UK forms part of our global network of manufacturing plants, it’s not just for the European market.

‘The only place we produce the vehicle we produce at Swindon is in Swindon itself. So from that point of view it’s a very big decision to take a different approach.

‘Certainly we are right behind our Swindon approach, and really it hasn’t come up that we would have to look at putting Swindon somewhere else.

‘The logistics of moving a factory the size of Swindon would be huge, and as far as we’re concerned from a European (perspective), and as far as our Japanese head office is concerned, we’re right behind supporting continued production at Swindon and indeed our whole European operation to continue there.

‘In terms of the impact of Brexit, I think we are looking at hopefully relatively short-term disruption as we get used to the new rules and new ways of doing business.’

A spokesman for Honda was not immediately available to comment on the closure of the Swindon plant.

The manufacturer is believed to be maintaining its European headquarters in Bracknell, Berkshire, and its Formula One operation in the UK. 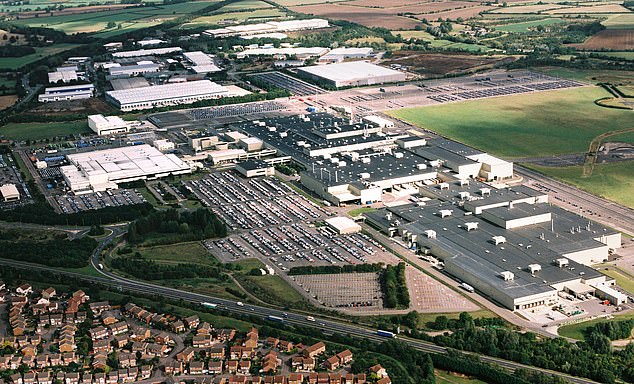 The Honda plant in Swindon, Wiltshire is pictured in a file photo from 1998