A powerful photograph of a young girl crying while her mother is detained by US border patrol has been named the best photo of the year.

John Moore took the stunning image of the two-year-old Honduran girl near the Mexico border as her mother was stopped and searched.

The staff photographer at Getty Images has been covering the immigration crisis at the US-Mexico border for the last 10 years and earlier this year he published a book dubbed Undocumented: The Immigration and the Militarization of the US-Mexico Border.

Mr Moore said: ‘My goal since I began photographing immigration and border security issues a decade ago has been to illuminate a story that is often told through statistics.’

Since 1955, World Press Photo has been the world’s largest and best-renowned annual press photography contest.

Other nominated photos feature children suffering in Syria and the migrant caravan story.

The World Press Photo contest has awarded this image by John Moore their photograph of the year. It shows a two-year-old Honduran girl crying as her asylum seeker mother was detained by US border force in McAllen, Texas. They had rafted across the Rio Grande from Mexico and were stopped and searched before being sent to a processing centre 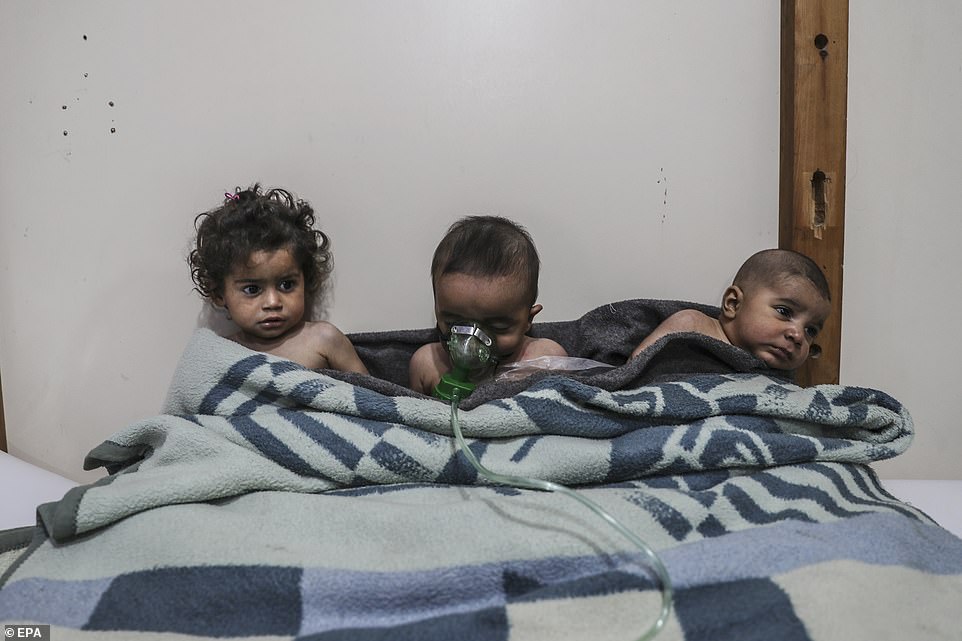 Three young children receive treatment after a gas attack on al-Shifunieh village in Eastern Ghouta, Syria. The ‘Syria, No Exit’ story won the second prize in the stories category of the WPP 2019 contest. The event is the world’s largest photography contest and has been running since 1955 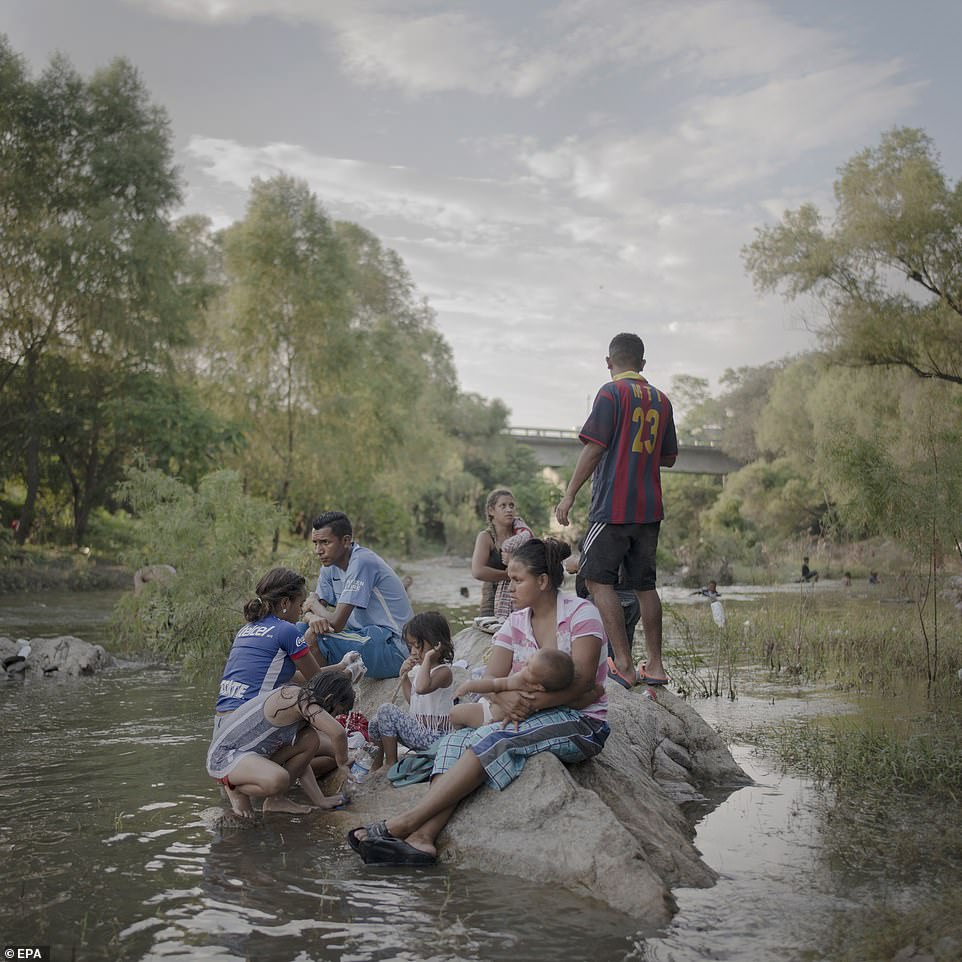 The ‘Story of the Year 2019’ award went to the migrant caravan story. This picture shows families bathing, washing clothes and relaxing by the Rio Novillero near Tapanatepec in Mexico. People of all ages stand and sit on the rock looking dejected as they make their way to the US 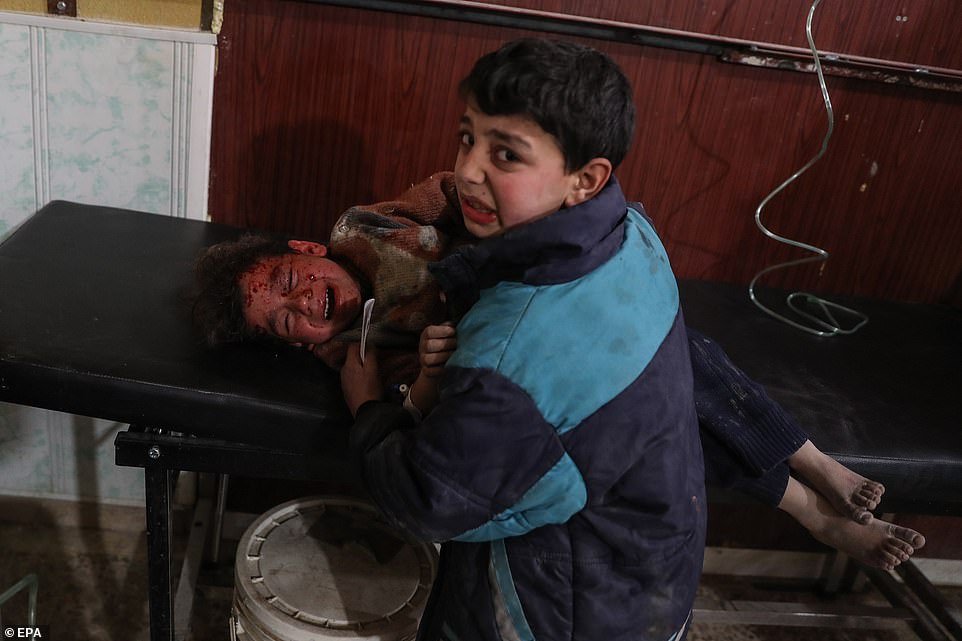 An injured child is comforted by their brother while receiving first aid at a hospital after a bombing in Douma, Syria. The photo is part of the ‘Syria, No Exit’ story and was taken in February 2018. The photo shows the rudimentary conditions and the horror of the conflict in which young children became victims 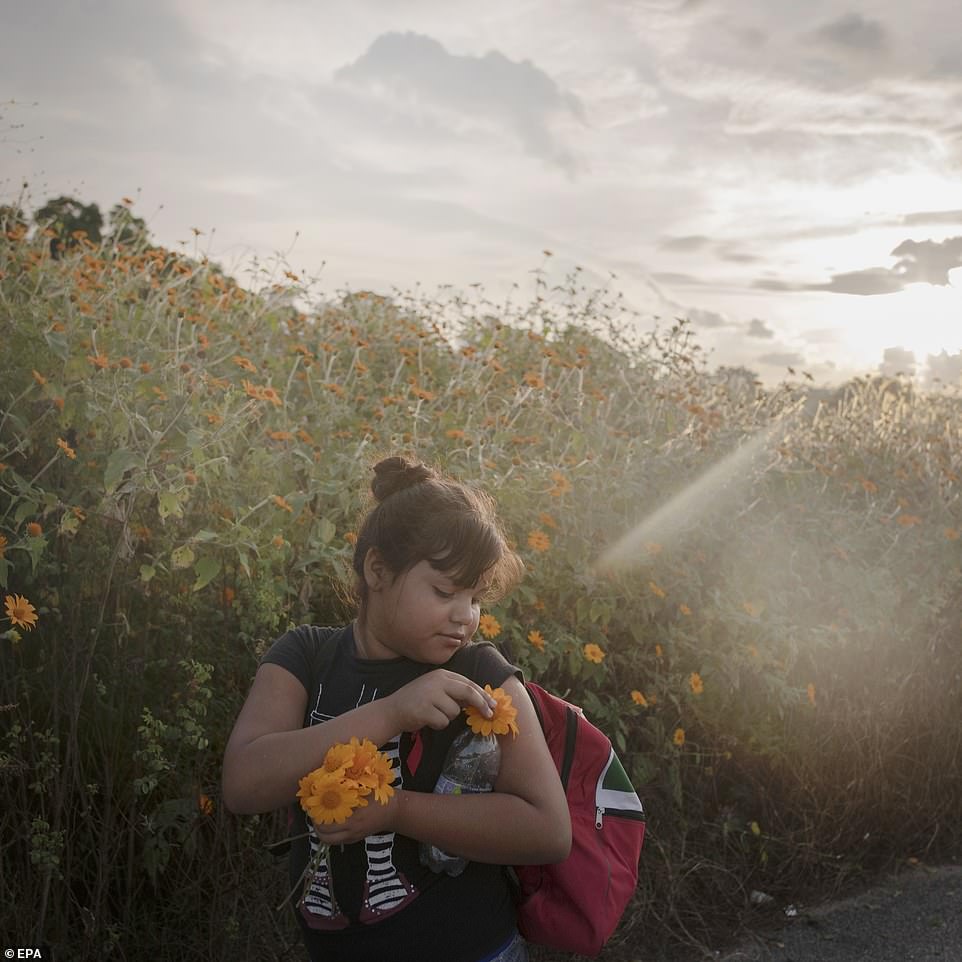 A young girl picks flowers during the day’s walk from Tapanatepec to Niltepec in Mexico as part of the ‘Migrant Caravan’, a distance of 50km. The photograph was taken by Pieter Ten Hoopen. The migrant caravan saw thousands move north fleeing persecution, poverty and violence 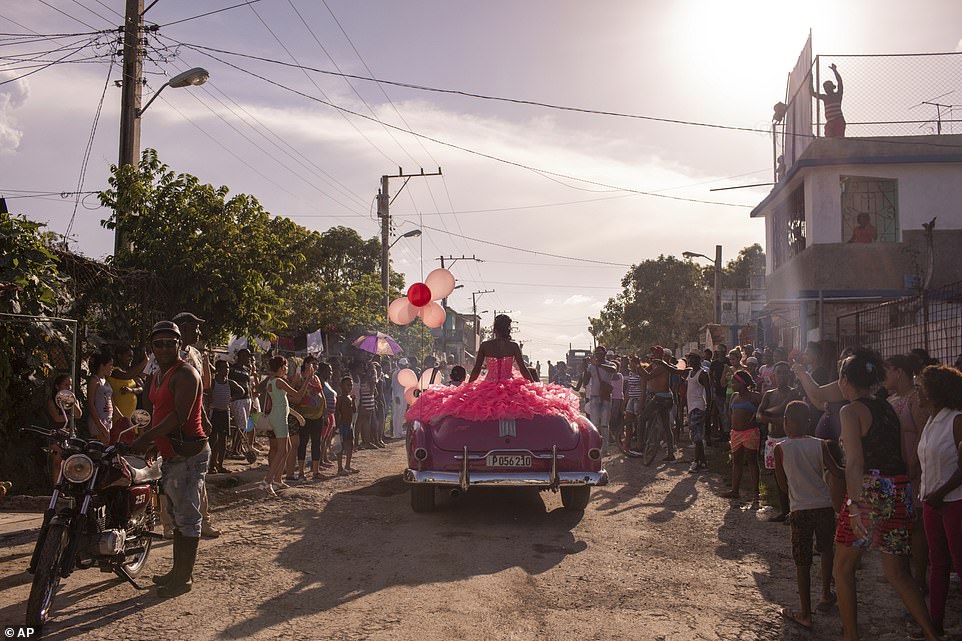 Diana Markosium took this photograph titled Cubanitas which was awarded first prize in the competition’s Contemporary Issues category. It shows a girl riding around her neighbourhood in Havana, Cuba, in a pink 1950s convertible to celebrate her 15th birthday 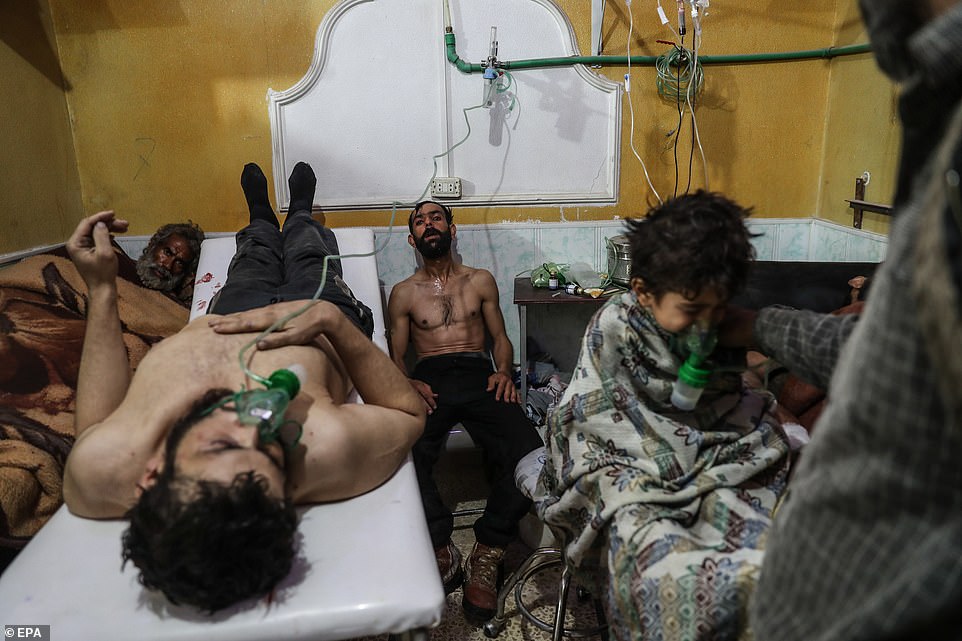 People receive treatment after a gas attack in Eastern Ghouta. More than 1,000 Syrian civilians were reported killed in a few weeks after the attacks in February 2018. The Syrian military was accused of targeting civilians in the gas attacks but it said it is trying to liberate the region 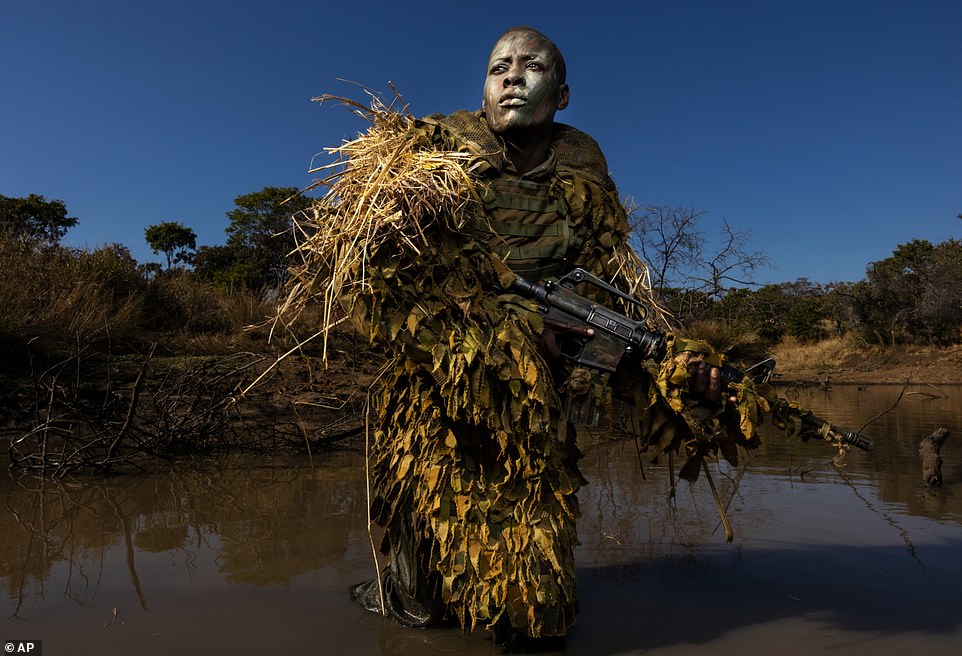 ‘Akashinga – the Brave Ones’ by Brent Stirton was awarded first prize in the Environment category. It shows Petronella Chigumbura, 30, a member of an all-female anti-poaching unit called Akashinga in Zimbabwe. She is pictured participating in stealth and concealment training in the Phundundu Wildlife Park 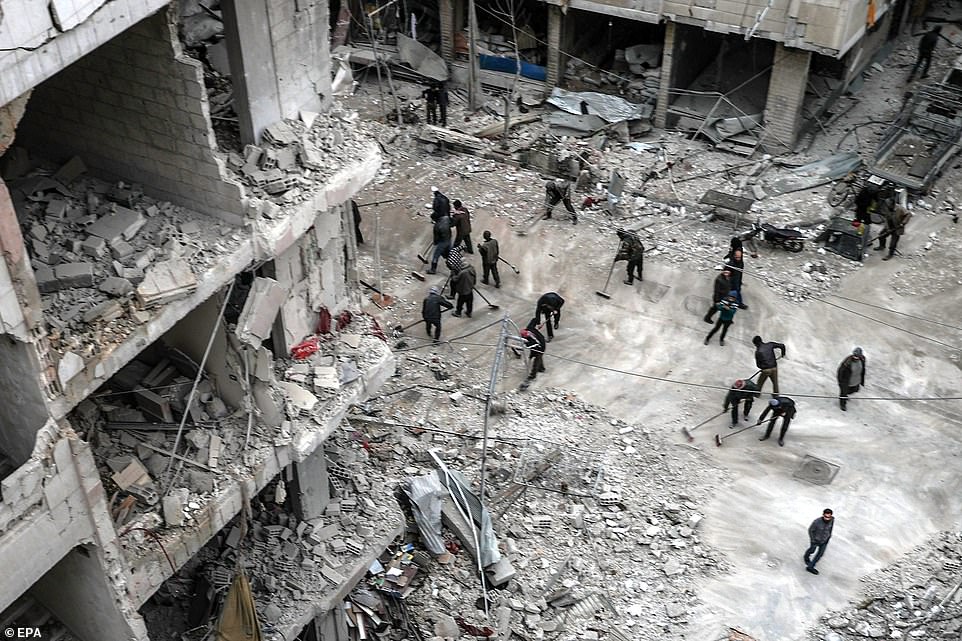 Syrians inspect the rubble of damaged buildings after several days earlier in rebel-held Douma. The photograph shows the scale of the destruction with the whole facade of a multi-storey building destroyed. Brave civilians sweep the streets filled with dust and wreckage from the concrete buildings 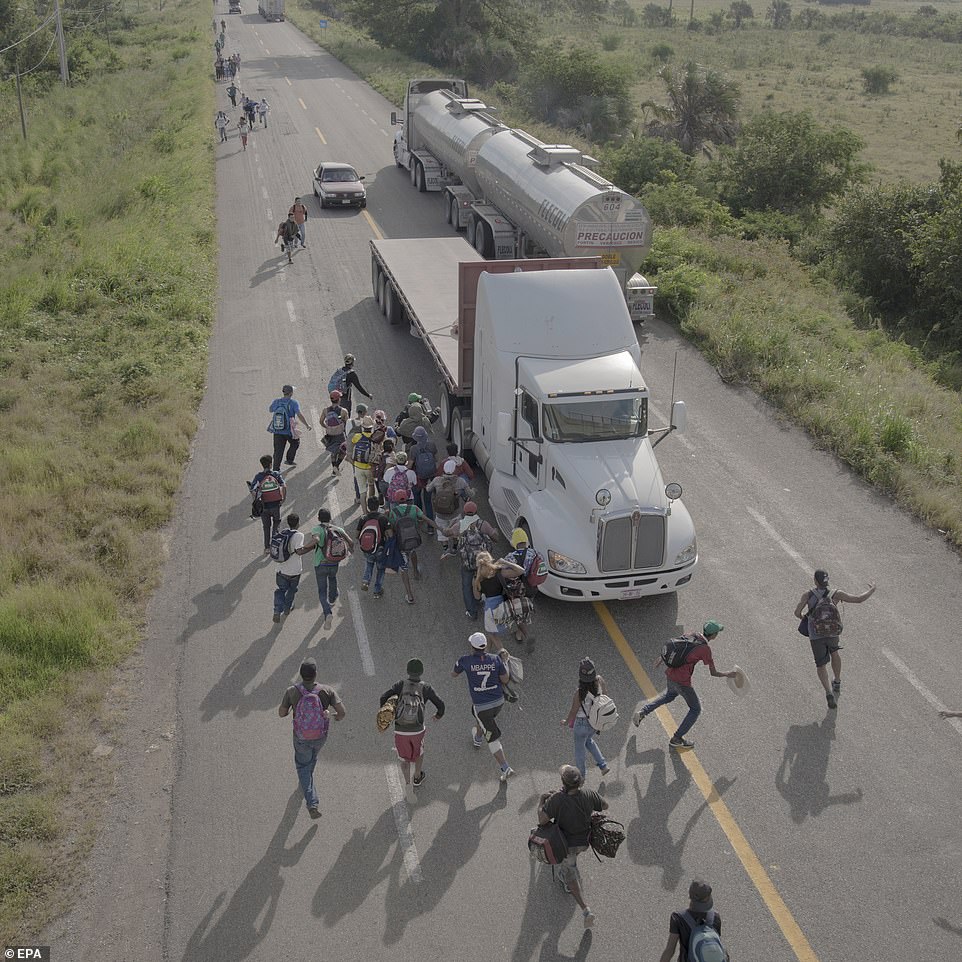 Migrants run to a truck that has stopped to give them a rude outside Tapanatepec in Mexico in October. Some drivers charged the desperate travellers for the ride but most offered free lifts as a show of solidarity. The migrants were fleeing desperate situations in Honduras, Guatemala and El Salvador 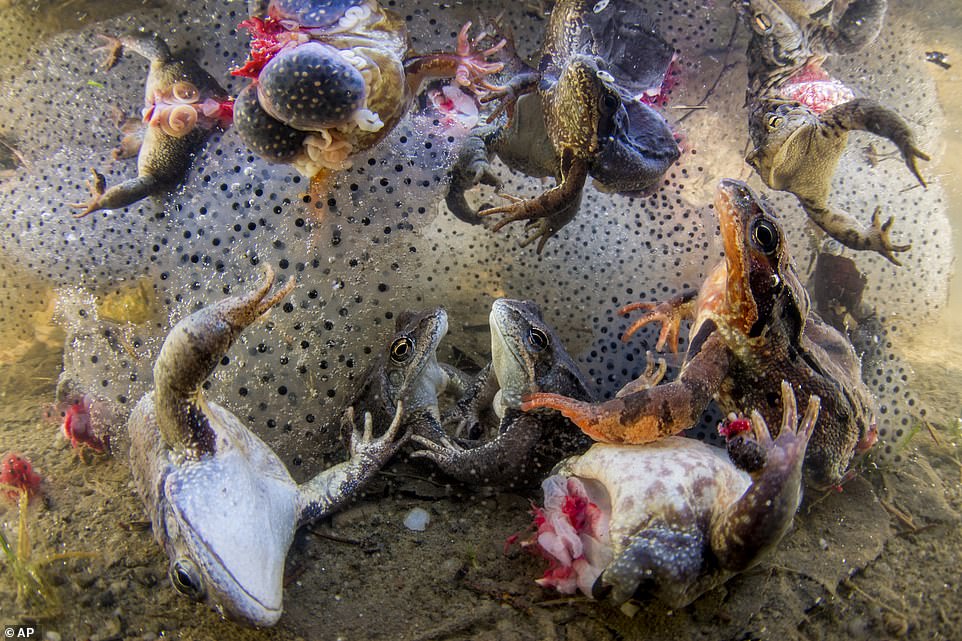 ‘Harvesting Frogs Legs’ by Bence Mate was awarded first prize in the Nature category. It shows frogs with their legs severed and surrounded by frogspawn. The colourful photo shows the frogs struggle to the surface after being thrown back into the water in Romania. 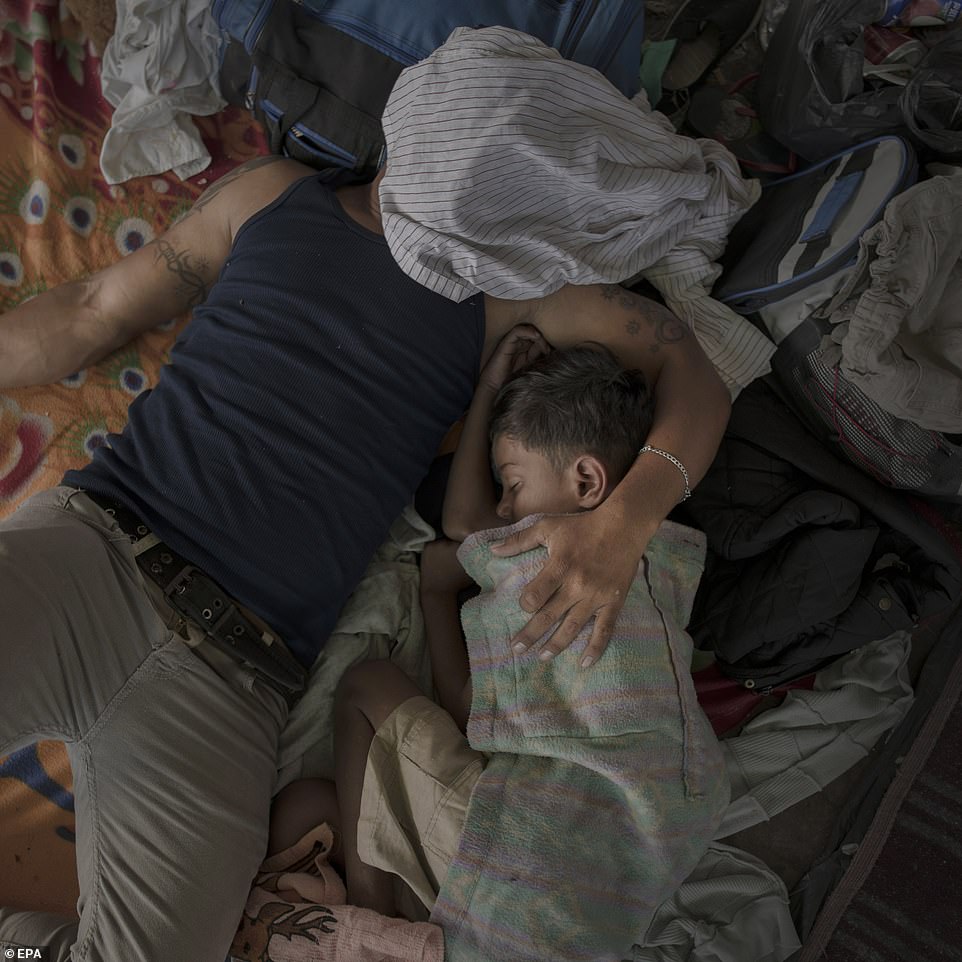 A father and son sleep after a long day of walking in Juchitan in Mexico. President Trump labelled the arrival of the migrants an ‘invasion’ and he sent a number of incendiary tweets calling them ‘gang members’ and ‘very bad people’ as they headed towards the US 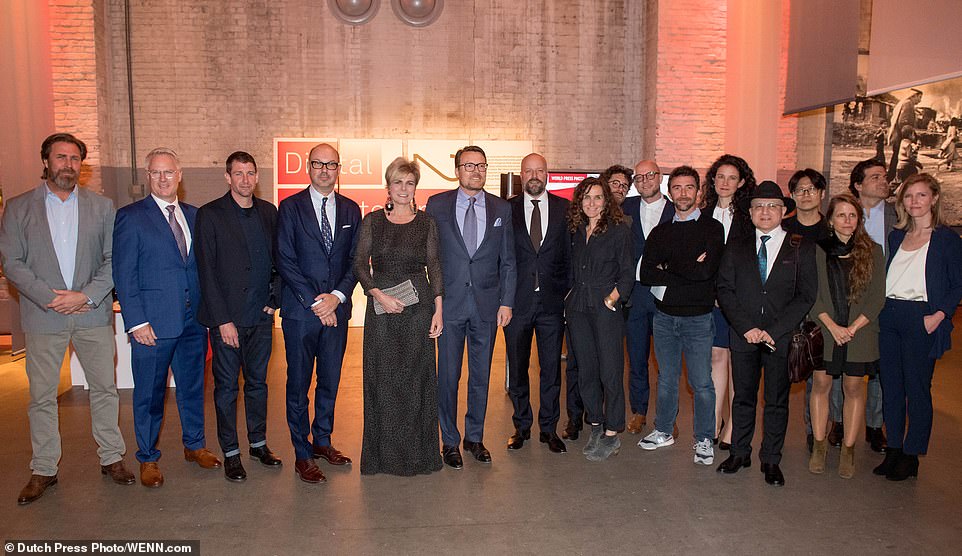 Prince Constantijn and Princess Laurentien of the Netherlands (centre) attended the World Press Photo Awards Show in Amsterdam. The competition has been running since 1955 and the Prince is the patron of the Amsterdam-based non-profit organisation