Honduras appeared to have pulled back from the brink of crisis on Friday, after the opposition candidate admitted defeat in a disputed presidential poll and the United States recognized the incumbent as the victor.

“With the decision by Washington, I am no longer in the running,” Nasralla told the HCH television station. As he spoke, police were dismantling the latest barricade erected around the capital by his supporters to protest the vote.

Washington is Honduras’ main aid donor and largest trading partner and US diplomats have been following events in the impoverished Central American republic nervously since the November 26 election.

Vote counting took more than a week, with mysterious breaks in the process, and the leftist opposition alliance has alleged that Hernandez only won through fraud.

But on Friday the US State Department congratulated the 49-year-old on his re-election, with the proviso that all “irregularities” in the vote be fully investigated.

“A significant long-term effort to heal the political divide in the country and enact much-needed electoral reforms should be undertaken,” spokeswoman Heather Nauert said.

“We urge Honduran citizens or political parties challenging the result to use the avenues provided by Honduran law.”

Nauert noted that vote monitors from both the Organization of American States and the European Union had noted shortcomings in the way the election had been conducted.

And she insisted that the Honduran Supreme Election Tribunal should investigate “and fully review any challenges filed by political parties.”

Washington urged all Hondurans to refrain from violence and warned that government security forces who fail to respect the rights of peaceful protesters must be held to account.

Honduran authorities declared a curfew on December 1 after opposition protests broke out.

Global rights watchdog Amnesty International had tracked 14 deaths by December 8 and accused the military police of acting with brutal impunity against protesters.

The United Nations has also expressed concern over “excessive use of force.”

There was less sign of trouble on Friday, and police were able to quickly dismantle attempts to barricade roads on the entrance to the capital, Tegucigalpa.

The Opposition Alliance Against the Dictatorship has called for “peaceful protests” and has claimed that up to 34 people have died since the trouble erupted.

According to the official results, Hernandez beat the Alliance’s Nasralla by 1.5 percentage points.

Nasralla maintains he won the vote, and travelled to the United States this week to press allegations of fraud in meetings with State Department officials and the Washington-based OAS. 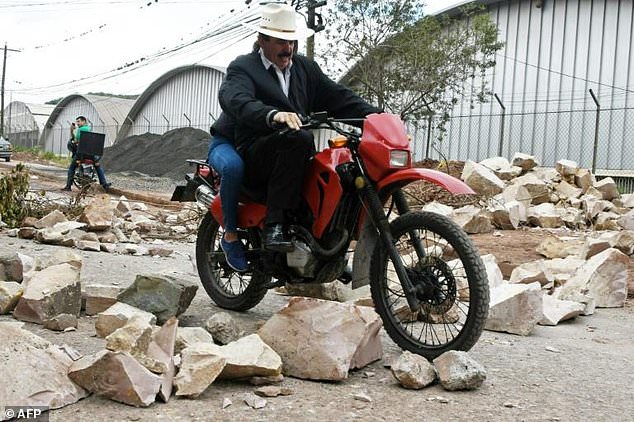 Former Honduran President Manuel Zelaya, ousted in a 2009 coup, rides a motorcycle through the blocked streets and avenues of Tegucigalpa

But this week the United States was leaning toward endorsing Hernandez, whose government was just one of nine worldwide to back Washington in this week’s UN vote admonishing it over its recognition of Jerusalem as Israel’s capital.

A senior US State Department official told AFP earlier this week that Washington had not seen “anything that alters the final result.”

And on Tuesday, Hernandez urged the opposition to engage in talks with him to calm the crisis.

But the opposition rebuffed the appeal and 64-year-old Nasralla — an ally of ousted former president Manuel Zelaya — demanded that the poll be held again.

The opposition will not have been surprised by Washington’s support for Hernandez, who is seen as a US stooge. Zelaya mocked him as “the US ambassador to Honduras.”

“We are going to continue permanently in the streets, we do not have to surrender,” he declared on UneTV. “It’s the Christmas resistance.”