Protesters in Hong Kong have ended their overnight siege of police headquarters peacefully.

By daybreak, police had cleared the streets of barriers set up by protesters to snarl traffic in the Asian financial centre, and only a few groups in the mostly youthful crowd remained.

Many slept outside the legislature. Traffic was again smooth on a major thoroughfare through the government’s central complex as the protest movement regrouped to consider next moves.

Police said nine female and four male staffers were taken to hospital ‘with considerable delay’ during the blockade. 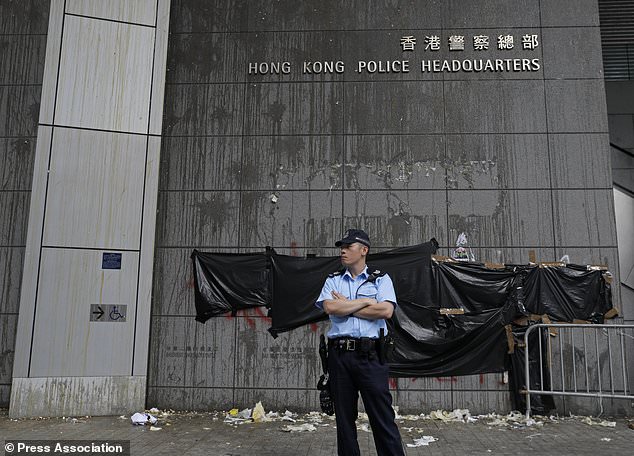 By daybreak, police had cleared the streets of barriers set up by protesters to snarl traffic in the Asian financial centre 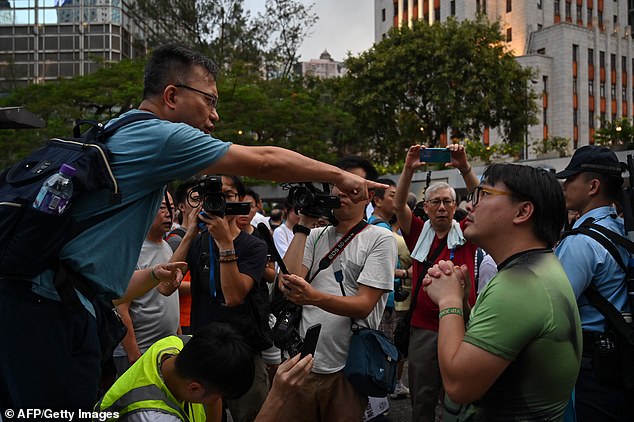 The police statement did not say whether they were injured in clashes or had otherwise become unwell.

They threw eggs at the building and drew graffiti on the walls. Protesters also ‘splashed oil’ and targeted police officers’ eyes with laser pointers, according to the police.

Hong Kong has been rocked by major protests for the past two weeks over legislative proposals that many view as eroding the territory’s judicial independence and, more broadly, as a sign of Chinese government efforts to chip away at the city’s freedoms.

But protesters are demanding that she formally withdraw the proposed changes to the extradition laws, which would expand the scope of criminal suspect transfers to include mainland China, Taiwan and Macau. 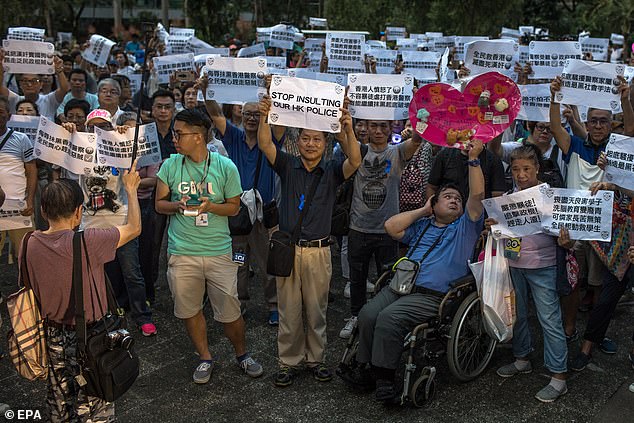 The event was held by activists in honour of the Hong Kong police, which is under society’s pressure after the riot police fired rubber bullets, tear gas and pepper spray at protesters during the mass protest 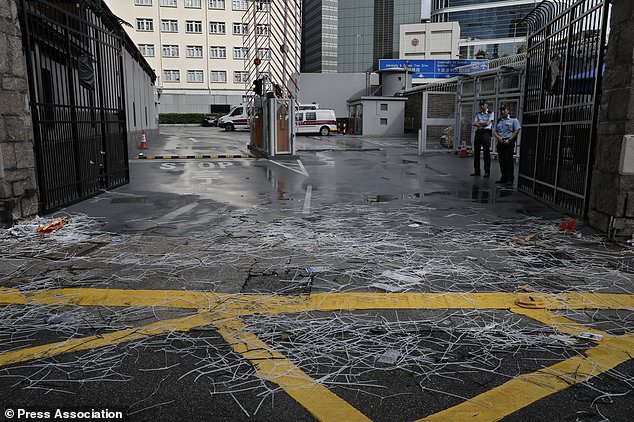 Legal and business groups in Hong Kong oppose the legislation, saying critics of China’s ruling Communist Party would be at risk of torture and unfair trials on the mainland and that it further erode the ‘one country, two systems’ framework under which Hong Kong has been governed since the handover from British rule in 1997.

The peaceful ending to Friday’s protests drew a sigh of relief in the city of 7.4 million people, after police unleashed tear gas and rubber bullets last week in violent clashes that left dozens injured on both sides.

Police were previously criticised for their use of force but this time waited out the protesters.

Police did issue a statement at 4.50am local time condemning them for blocking key streets and seriously disrupting work at police headquarters.

‘Police have shown the greatest tolerance to the protesters who assembled outside PHQ, but their means of expressing views have become illegal, irrational and unreasonable,’ the statement said in part.

Activist Joshua Wong called on police to answer demands over heavy-handed tactics used during a mass protest on June 12, including the firing of 150 rounds of tear gas, rubber bullets and beanbag rounds, and the beating of unarmed protesters by police with truncheons.

‘We … urge police to apologise to the people’ over the use of such tactics and their labelling of the gathering as a riot, Mr Wong said.