Hong Kong’s pro-democracy campaign left Beijing with a bloody nose today after a landslide local election victory saw them win 90 per cent of the seats up for grabs.

Pro-democracy protesters celebrated in the streets as the results were announced by election officials,

The vote has been treated as a referendum on the China-backed government’s handling of months of violent political unrest – and the people of Hong Kong dealt a clear rebuke to city leader Carrie Lam.

Wu Chi-wai, leader of the city’s biggest pro-democracy party, said Monday that the bloc swept nearly 90% of 452 district council seats, which will help it take unprecedented control of 17 out of 18 district councils. The results were based on official tallies announced by election officials.

District councils deal with local matters such as bus routes and garbage collection, but they have historically been dominated by pro-Beijing candidates and the result deals a symbolic blow to the unpopular Lam.

In addition, district councillors choose 117 of the 1,200 people who elect the city’s leader – giving the pro-democracy movement a voice on the panel.

Lam, who had claimed that a silent majority supported her, promised today to ‘listen humbly to citizens’ opinions and reflect on them seriously.’

Hong Kong has endured months of mass rallies and violent clashes pitting police against protesters who are mobilised by fears that Beijing is whittling away at the semi-autonomous territory’s freedoms, which are unique for China. 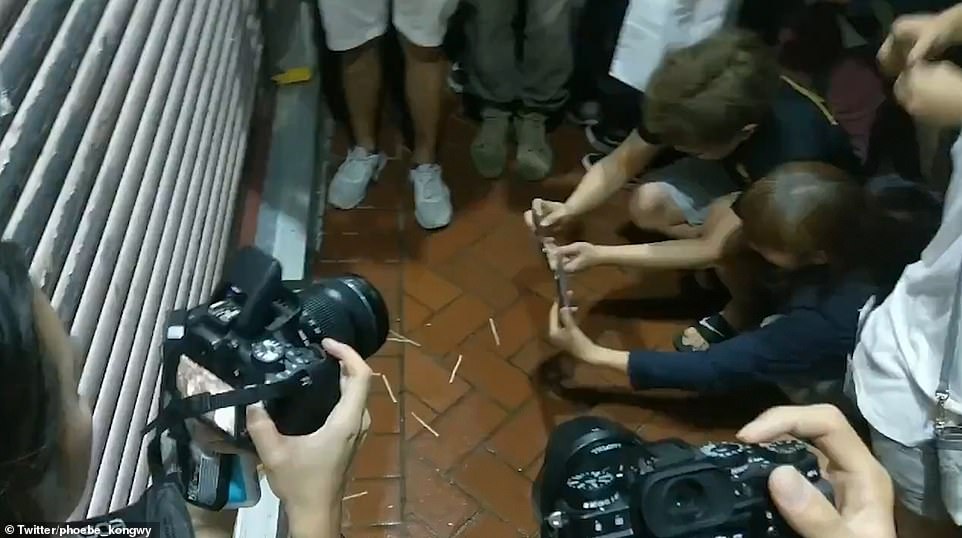 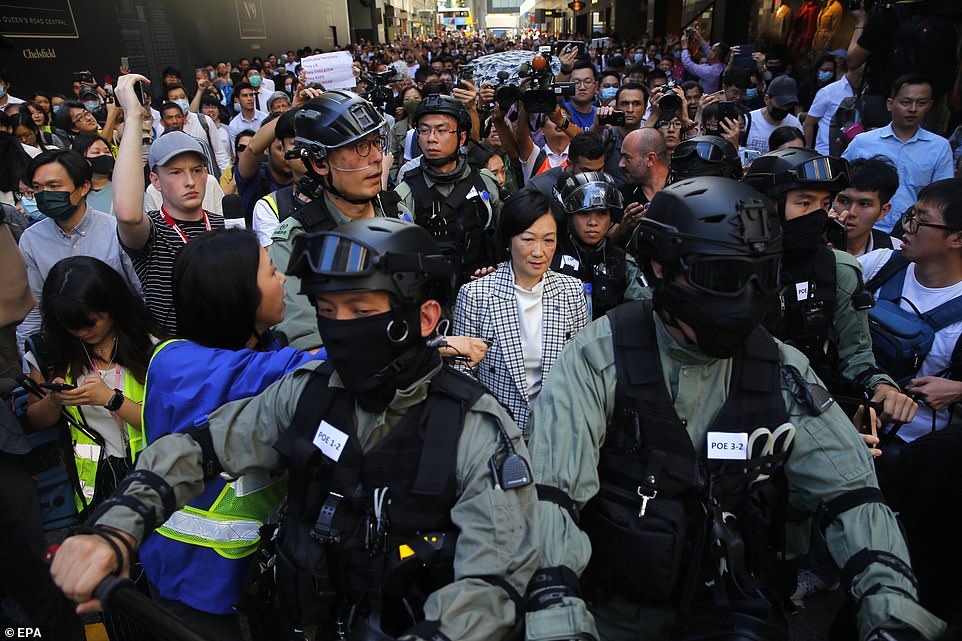 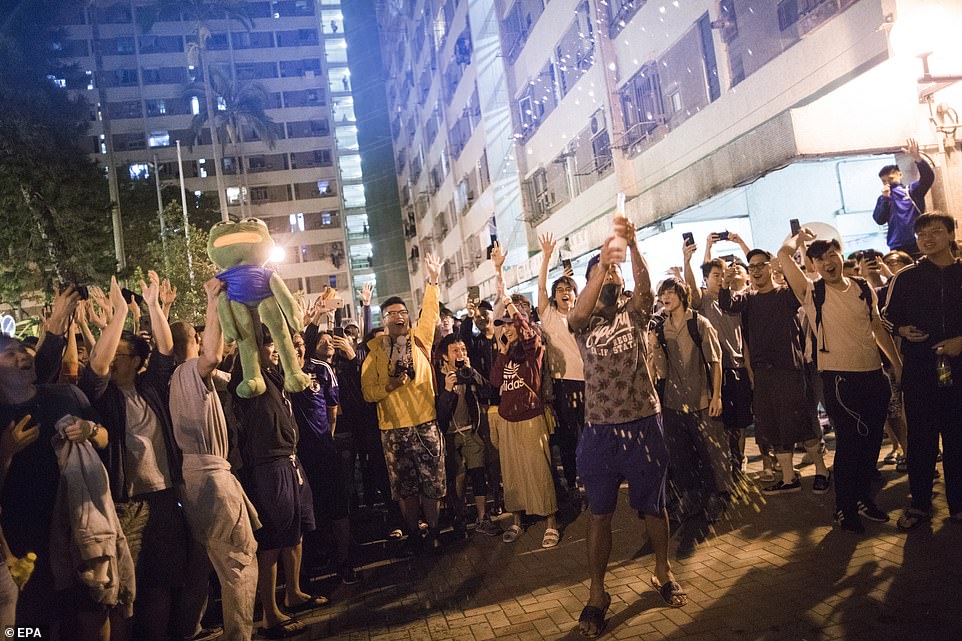 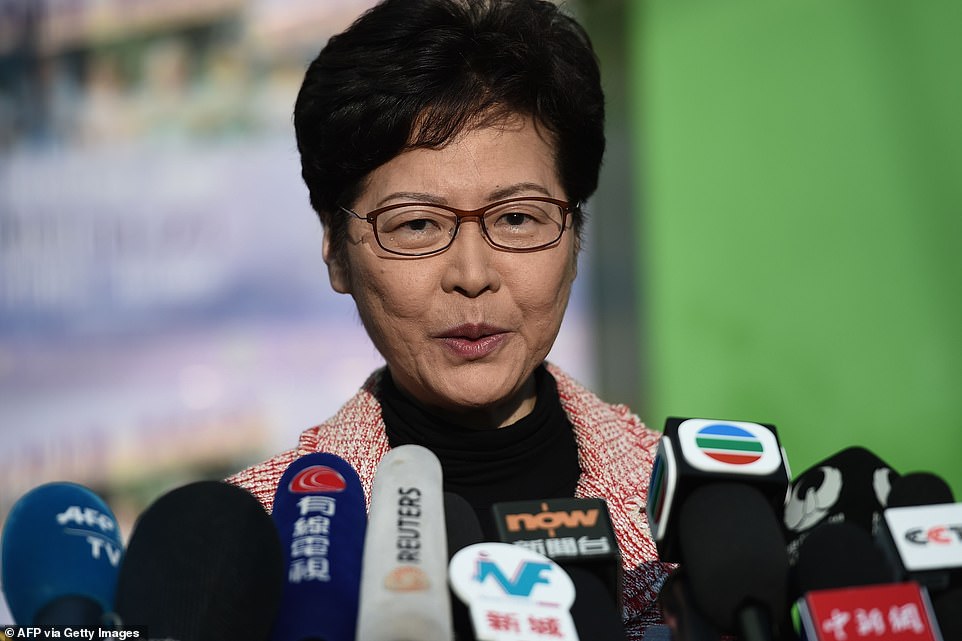 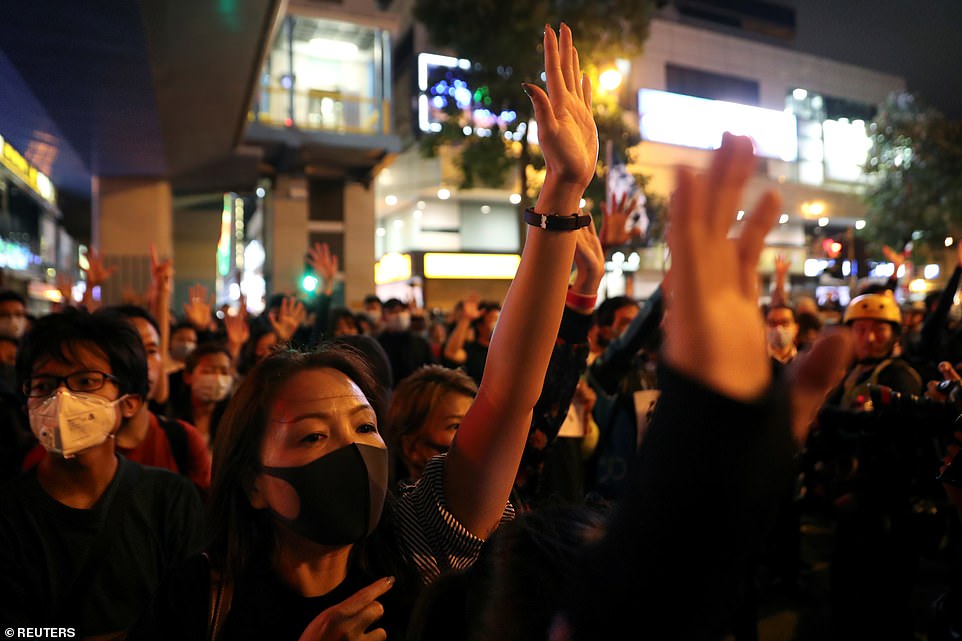 Their demands include direct popular elections and a probe into alleged police brutality against demonstrators during the months of protests.

‘The voice of the public is loud and clear… We hope the government can heed the protesters’ demands,’ Roy Kwong, a member of Hong Kong’s legislature who won a district council seat for the Democratic Party, was quoted as saying by the South China Morning Post.

Analysts had expected pro-democracy candidates to achieve only minimal gains in the councils.

A record 71 per cent of the 4.13 million citizens who registered to vote had cast their ballots, according to Hong Kong’s election watchdog, far higher than the then-record 47 percent who voted in 2015 council elections.

The largely leaderless protest movement started with giant rallies in June against a bill backed by Lam that would have allowed extraditions to China’s opaque justice system. 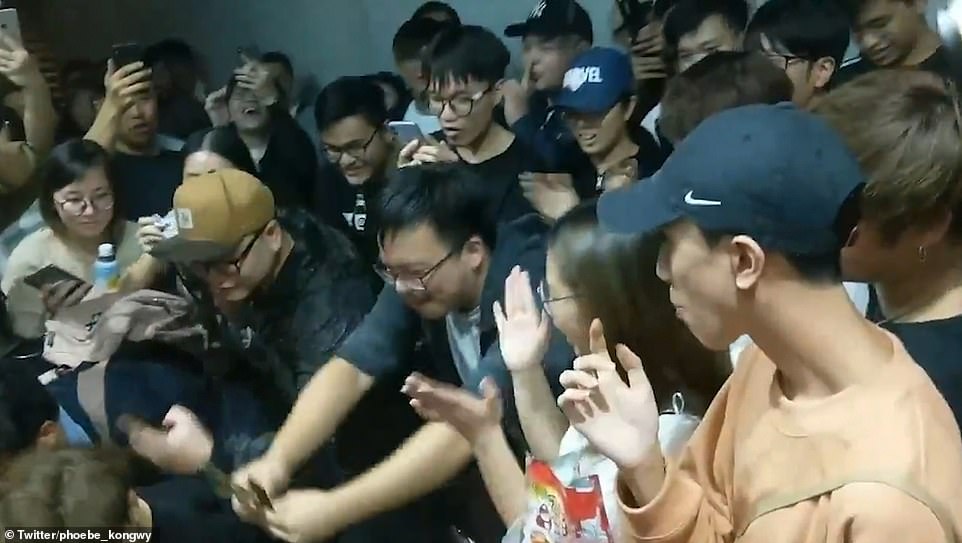 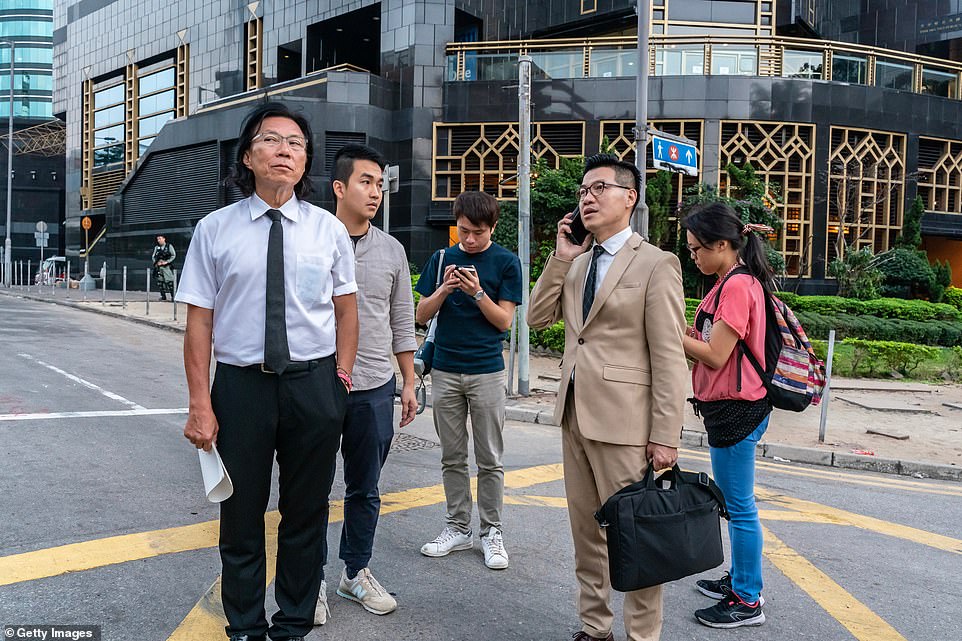 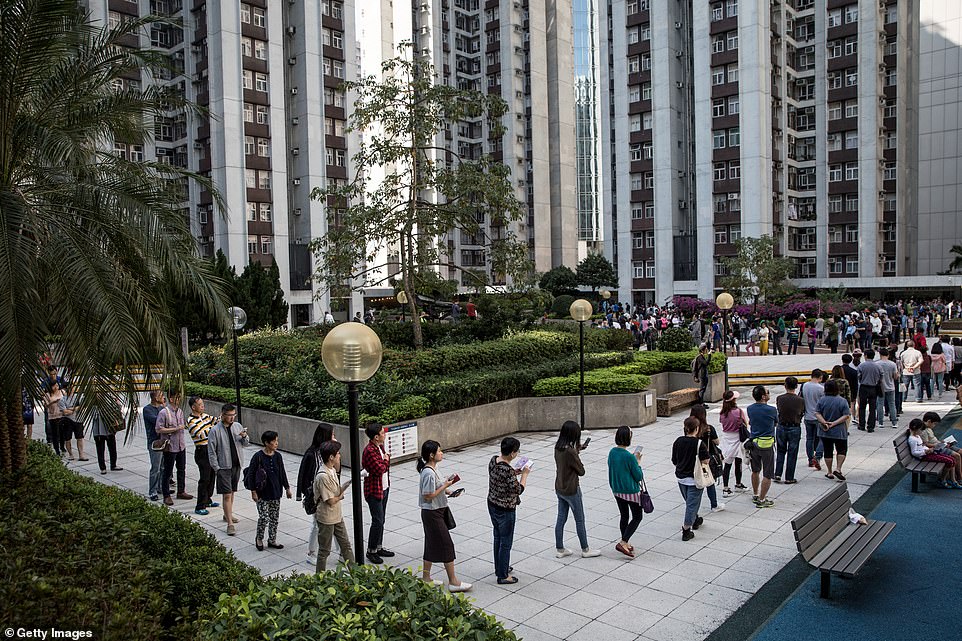 The turnout rate was 71 per cent, smashing the previous record. Pictured: people look at their phones as they queue up 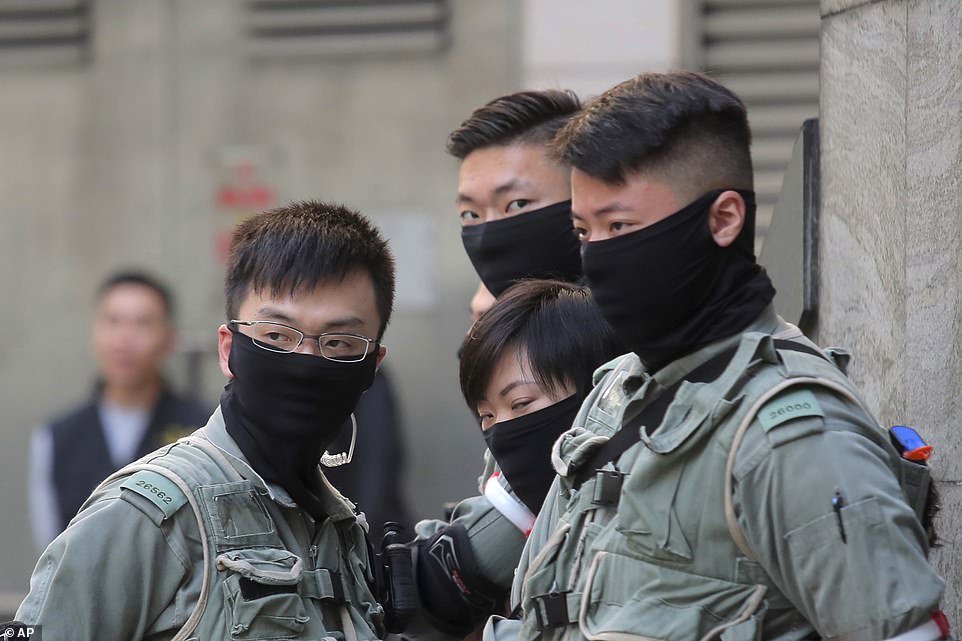 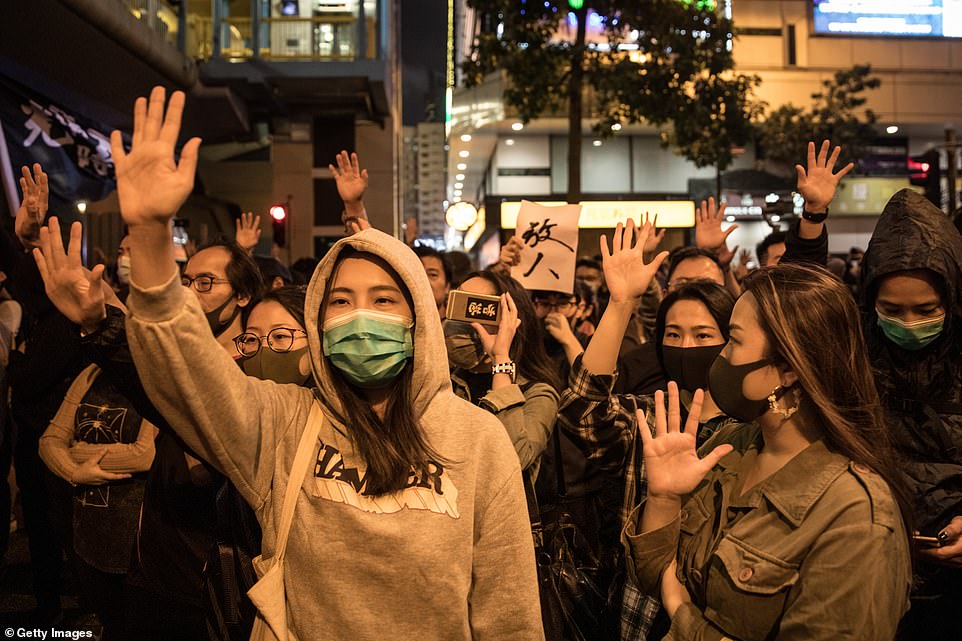 The bill was eventually declared ‘dead’ as public pressure grew, but the anger it unleashed sparked wider calls for democracy, which Lam’s government has resisted.

China has said the unrest is being fomented by violent foreign-backed criminals.

Long queues snaked out of polling stations across the territory of around 7.5 million on Sunday.

‘Even though one ballot can only help a little, I still hope it can bring change to society and support street protests in some way,’ 19-year-old student Michael Ng, voting for the first time said.

Protests died down in the poll run-up after pro-democracy figures urged calm to avoid triggering any delay or suspension of the polls.

No major disturbances were reported during voting.

The vote is the closest Hong Kongers get to direct representation.

The territory’s legislature is elected by a mix of popular vote and industry groups stacked with China loyalists, which ensures Beijing’s control.

Campaigning was marred by acrimony, with one pro-democracy candidate having his ear bitten off in an attack, while 17 other candidates of all stripes were arrested over protest-related activities. 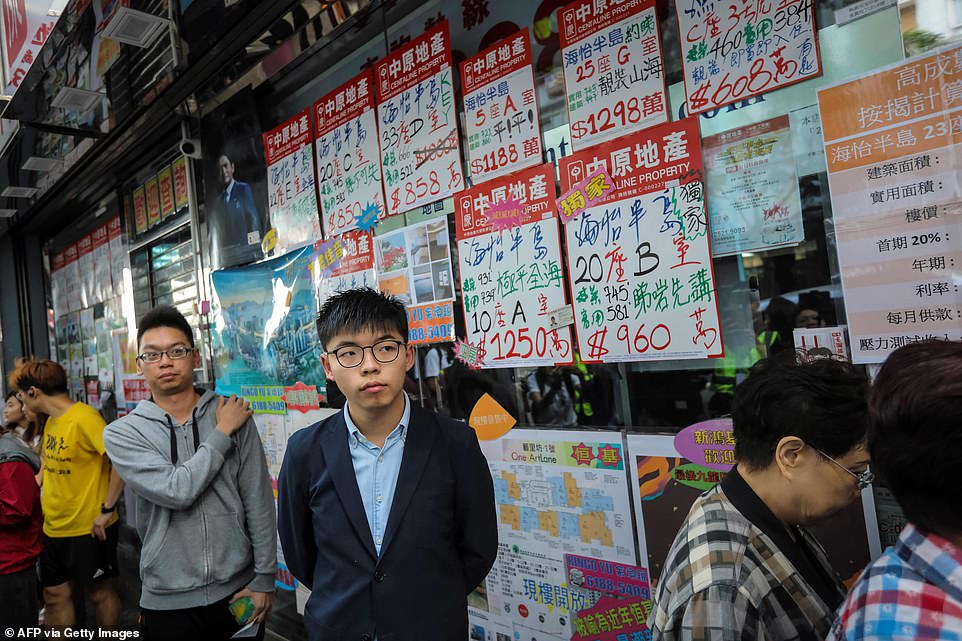 Pro-democracy activist Joshua Wong (centre), who was disqualified from running, queues up to cast his vote during district council elections in the South Horizons district in Hong Kong on November 24 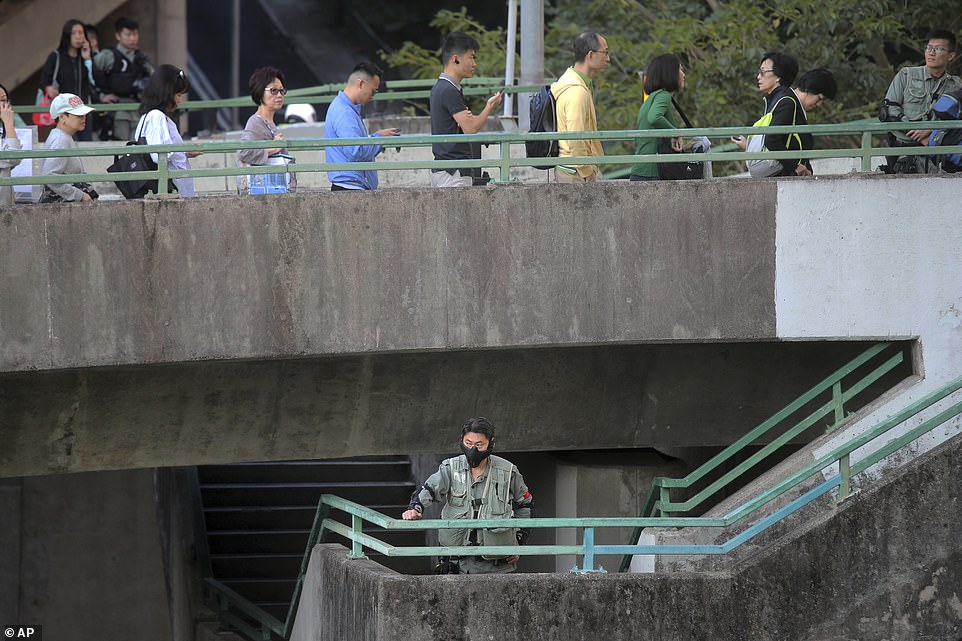 A riot policeman stands as voters line up outside of a polling place in Hong Kong. The elections have become a barometer of public support for anti-government protests now in their sixth month 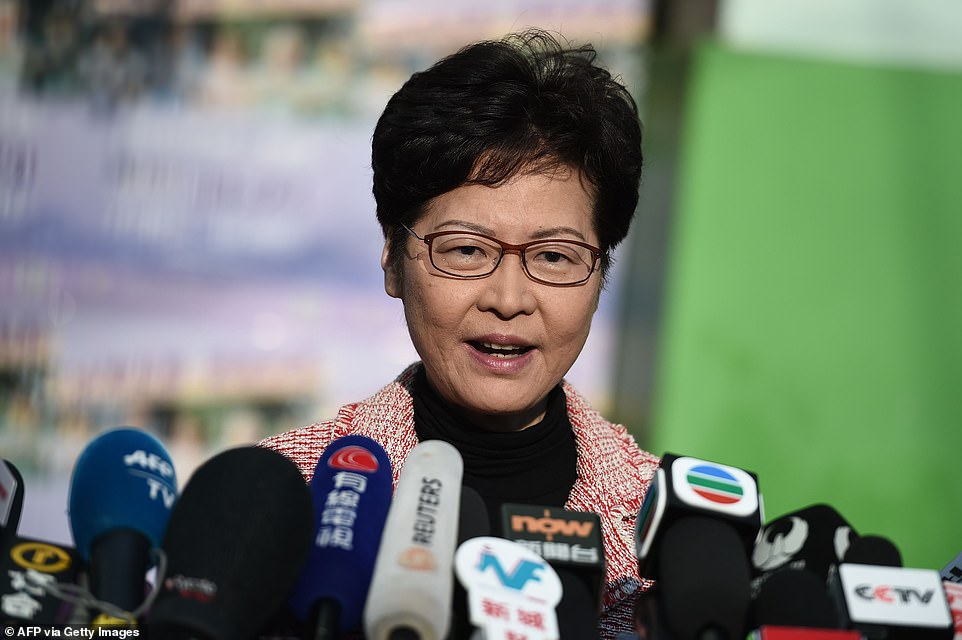 Hong Kong Chief Executive Carrie Lam speaks to the press after casting her vote during the district council elections in Hong Kong yesterday. She said she would ‘listen humbly’ following the results 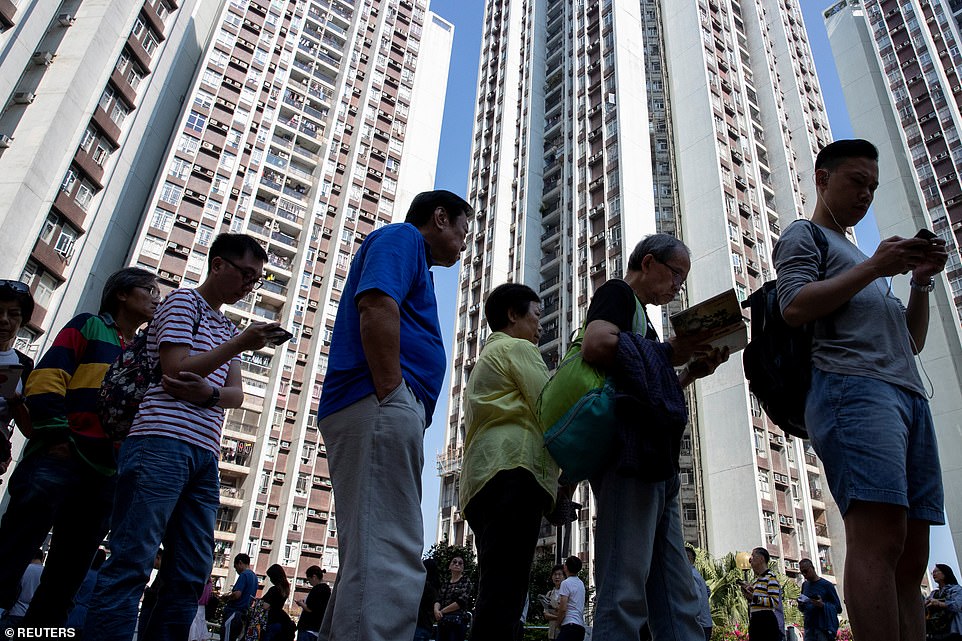 A record 1,104 candidates were vying for 452 seats and a record 4.1 million people enrolled to vote for district councillors who control some spending and decide issues such as recycling and public health

Jimmy Sham, a candidate for the Civil Human Rights Front, which organised some of the mass anti-government rallies of recent months, was beaten by men with hammers in October.

‘We can see Hongkongers are longing for a chance to express their stand,’ he said. ‘We don’t know yet, at the end of the day, if the democrats can win a majority. But I hope our Hong Kong citizens can vote for the future of Hong Kong.’

Police were seen outside some polling stations and on the streets but correspondents said they kept a low profile.

Beijing-backed Lam cast her ballot in front of television cameras and pledged that her government, widely seen as out of touch, would listen ‘more intensively’ to the views of district councils.

‘I hope this kind of stability and calm is not only for today’s election, but to show that everyone does not want Hong Kong to fall into a chaotic situation again,’ Lam said. 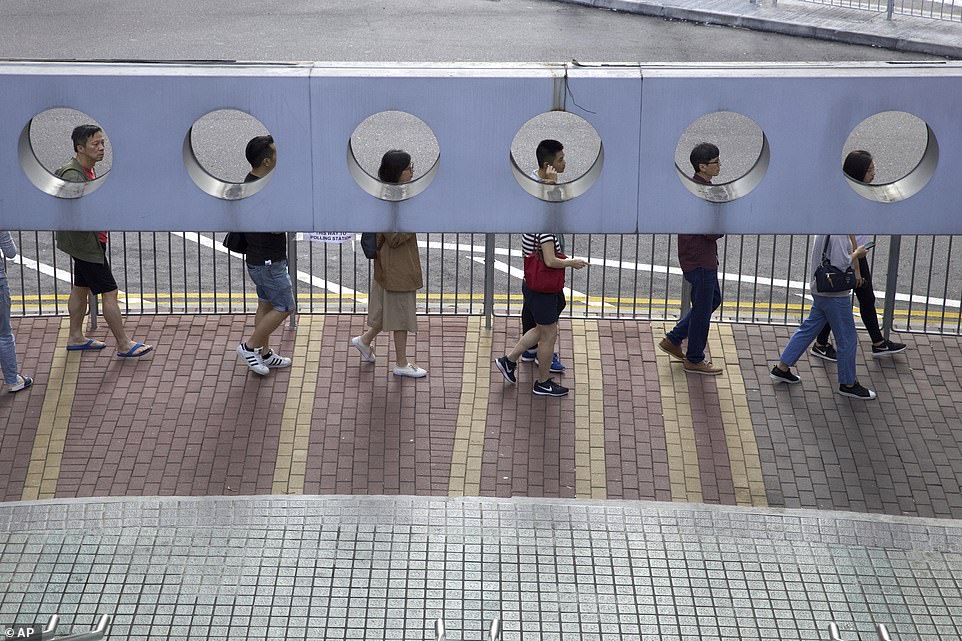 Voters line up to cast their ballots in the election yesterday. The results will give the pro-democracy camp 117 seats on the 1,200-member panel that selects the city’s chief executive 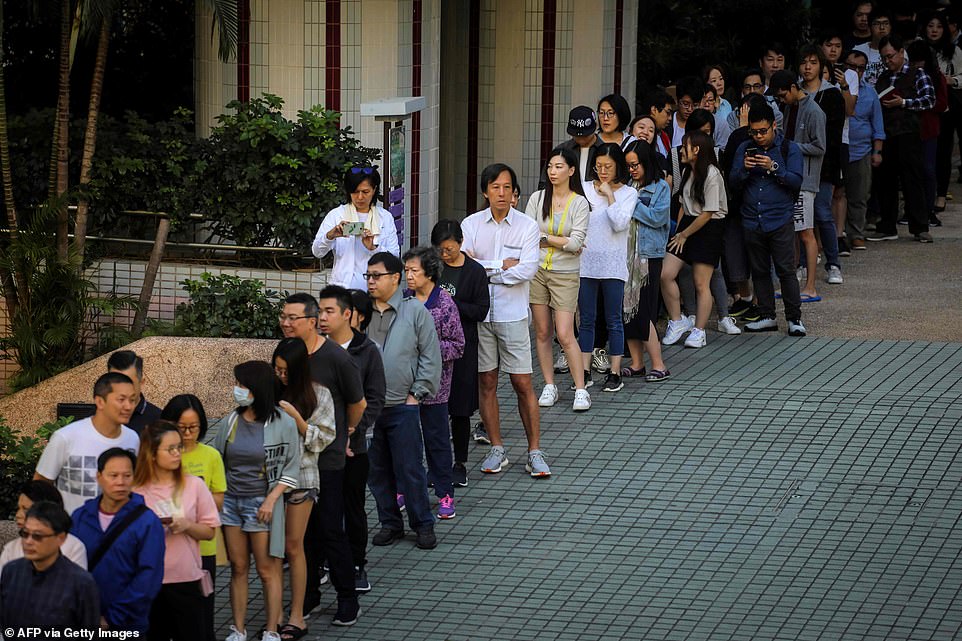 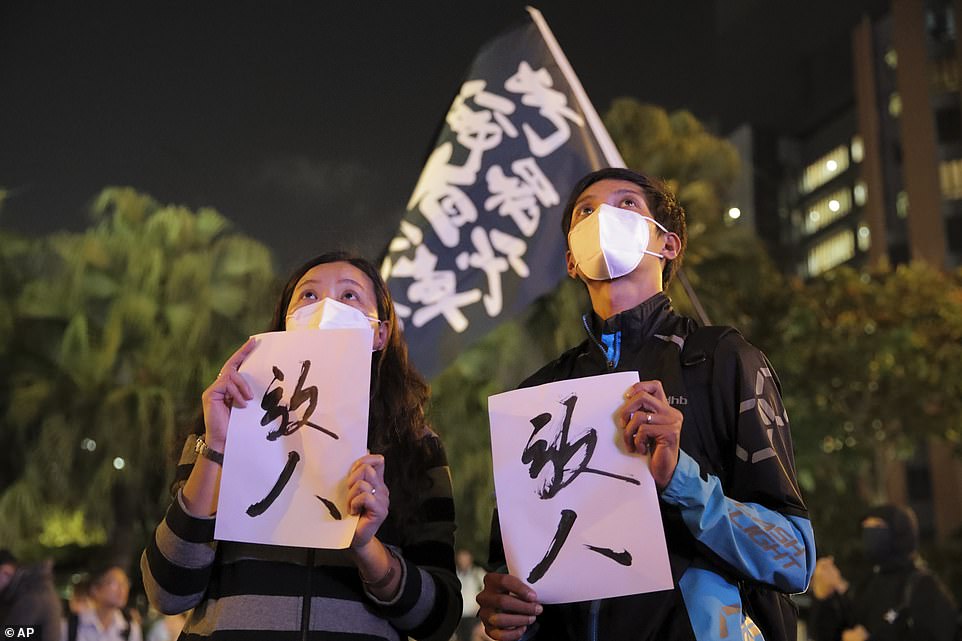 Protesters hold placards baring the words “Release People”, as they gather near the Polytechnic University