White House Communications Director Hope Hicks is expected to testify before the House Intelligence Committee, in the latest chapter in a standoff over what top White House officials will be allowed to discuss.

She will appear behind closed doors, after her January scheduled appearance got postponed, CBS News reported, citing multiple sources. 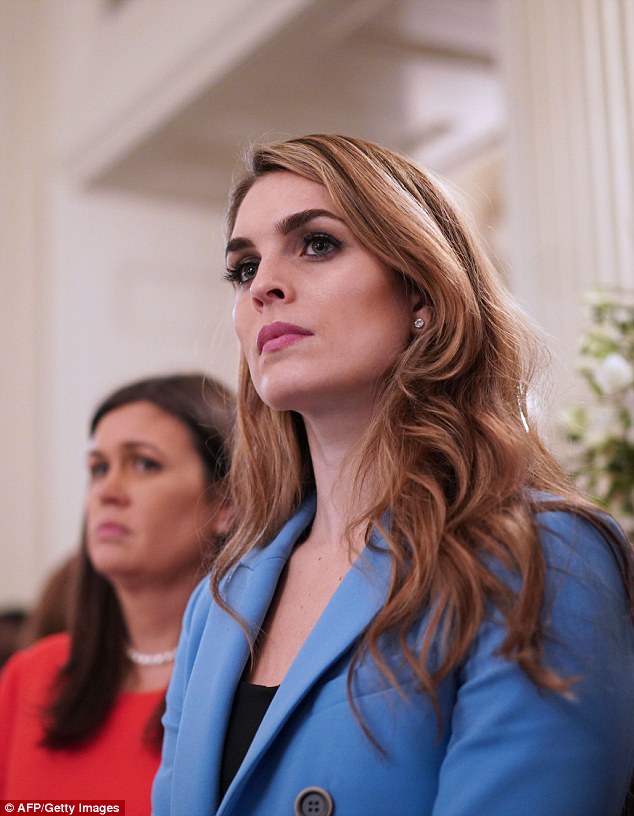 The panel’s top Democrat, Rep. Adam Schiff of California, said it was ‘likely’ Bannon would face contempt of Congress after failing to answer numerous questions in his last appearance.

‘I think it’s likely that he will face a contempt citation,’ Schiff said after Bannon only agreed to answer 25 questions authorized by the White House.

White House lawyers are attempting to declare off-limits questions from the transition, although so far the White House has stopped short of declaring executive privelege.

‘I suspect that Mr. Bannon has been informed that [the White House] will only stonewall so far,’ Schiff said at the Council on Foreign Relations.

‘They will never allow him to be fined or go to jail, but they do wish to draw the process as long as they can,’ Schiff added.

Hicks was aboard Air Force One when the White House drafted a statement in response to a New York Times report that Donald Trump Jr. had met in Trump Tower with a Kremlin-linked lawyer.

Additionally, the New York Times reported that Mark Corallo, a former spokesman for the president’s legal team, planned to tell Special Counsel Robert Mueller’s team that Hicks had said that the emails that Donald Trump Jr wrote about the infamous Trump Tower meeting with Russians ‘will never get out.’

Hicks is one of the president’s longest-serving political aides, having joined the campaign at its genesis.

Before that, the former teen model handled public relations for Ivanka Trump within the Trump Organization.

Hicks’ position in the White House came under additional scrutiny amid the Rob Porter scandal, as she had been dating the White House staff secretary at the time that he resigned in disgrace after DailyMail.com revealed allegations of abuse from two of his ex-wives.

Hicks confirmed to DailyMail.com on Valentine’s Day that she and Porter are no longer together.