A revolutionary hormone kit that lets men breastfeed could be available in as little as five years, according to its inventor.

The kit involves a man taking a cocktail of drugs throughout his partner’s pregnancy so that he grows milk ducts in time for the birth.

Although in the early stages and not yet tested, designer Marie-Claire Springham, say its side effects will likely include men growing breasts up to a B cup.

‘I can’t see why couples wouldn’t use this,’ the 24-year-old, who studied product design at Central Saint Martins, London, told MailOnline.

‘It seems unusual but women have been using hormones to change their bodies since they developed the birth-control pill.

Image shows a mock up of what the hormone kit could include. As well as containing the necessary hormones and drugs, the kit would also feature a breast pump to help stimulate the release of milk. A compression vest would also be included to mimic a breastfeeding bra

‘Many women struggle to breastfeed. This is an empathy tool so a male partner could help in a really useful and supportive way.’

The ‘chestfeeding’ kit, which was Ms Springham’s final year university project, was crowned the winner of the world’s first Meaning-Centred Design Awards earlier this week.

Although just a concept, the kit would involve a man taking the hormone progestin once a day as soon as his partner discovered she was pregnant.

Progestin is a form of the better-known hormone progesterone and causes the production of milk-producing glands that are needed for breastfeeding.

During the last six weeks of the woman’s pregnancy, the man would then take the drug domperidone four times a day.

Domperidone, which is often prescribed to women who struggle to breastfeed, stimulates the production of prolactin.

Prolactin is the hormone that tells a woman’s body to make breast milk.

The man would then continue taking this hormone-drug cocktail for as long as he wishes to breastfeed.

At this stage, he would be capable of releasing milk if he held a baby due to the release of the hormone oxytocin, according to Ms Springham.

But a man’s nipples generally need more stimulation than a woman’s, she added.

The kit therefore comes with a pump that helps release milk and is often also used by women who struggle to breastfeed.

Ms Springham based the above drug regimen on forums where trans people reported taking similar hormones to bring on breastfeeding.

It is unclear if this breast milk production would occur if a man took the hormone-drug cocktail for less than nine months.

‘Lactation can be induced in certain circumstances via a course of hormone therapy.

‘All attempts to better understand what gender means in parenting should be welcomed.’

It is unclear if a man’s breast milk could be as nutritious as a woman’s. 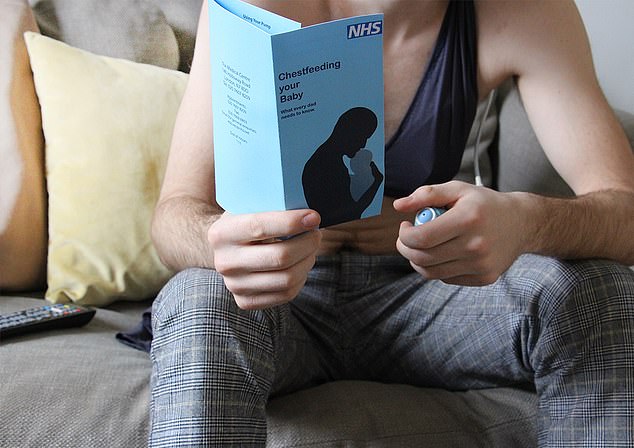 Due to the kit only being in the concept stage, its exact side effects are unclear.

However, Ms Springham imagines gynecomastia may be an issue, which causes a man’s breasts to enlarge and affects around 60 per cent of teenage boys to some extent.

Gynecomastia occurs when a man’s oestrogen levels exceed his testosterone.

Ms Springham adds a man’s breasts may swell up to a B cup in order for them to hold milk.

‘The kit contains a compression vest that acts like a breastfeeding bra,’ she said.

Other side effects are expected to be similar to that women experience when taking the contraceptive pill, such as bloating, headaches and mood swings, she adds.

It is unclear if the test may soon be tested on men, however, Ms Springham told MailOnline: ‘All the techonology is there.

‘This could be available within the next five-to-10 years.’

The kit came first place out of a shortlist of 18 entries at the inaugural Meaning-Centred Design Awards. These awards aim to celebrate designs that inspire cultural change.

‘At a time when we increasingly use hormones, medication and technology to change the life options available to us, Marie-Claire’s design concept goes right to heart of our taboos.’

Ms Springham added: ‘I’m thrilled to have won such a prestigious award.

‘The kit has the power to take what we thought we knew about parenting and turn it on its head, breaking down the strict gender and societal roles we have created for new parents.

‘I hope the discussions raised by this project are taken further and inspire even more innovation and progress.’