Celebrations for the West Coast Eagles’ win over the Collingwood Magpies in the AFL grand final on Saturday have taken a disturbing turn.

Footage posted online on Saturday showed a man cheering on his team as he dangled a dead magpie in front of his dog, before taking a bite of the bird himself.

He then dropped the magpie on the ground at his dog’s feet and stomped on it repeatedly.

Footage posted online on Sunday showed a man cheering on his team as he dangled a dead magpie in front of his dog, before taking a bite of the bird himself (pictured)

The graphic footage was uploaded to social media shortly after the game, PerthNow reported.

The footage is captioned ‘eats dead magpies’ with several emojis.

RSPCA Executive Manager Community Engagement Maree Daniels said the organisation had been made aware of the vision.

She said an investigation was underway.

‘Receiving this footage has certainly marred the weekend’s celebrations,’ she said.

‘At no time is it funny or cool to interfere with our native wildlife. 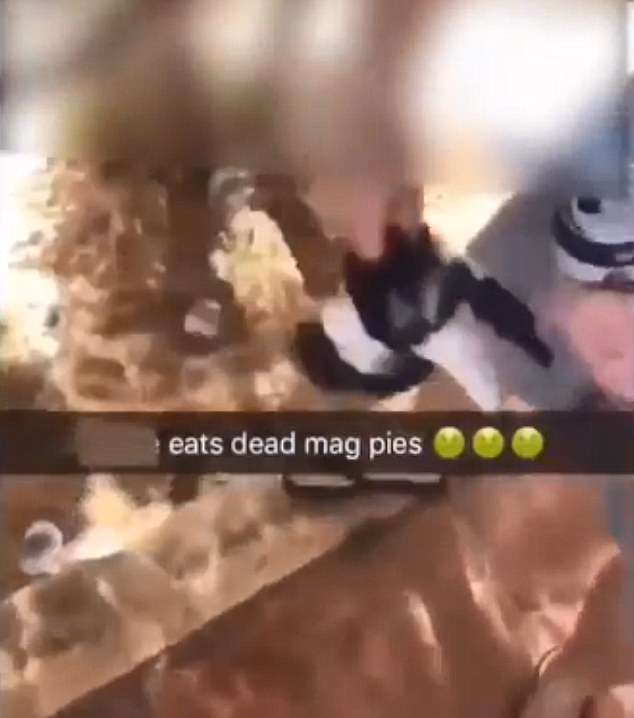 ‘The number of messages we have received, and the outcry about this stupidity on social media, shows that the community does not tolerate this kind of senseless behaviour.’

The footage comes only days after four men were charged in relation to the torture and death of two kangaroos, and another man was charged for a separate attack on emus.

Anybody with information regarding the attack is urged to call an animal cruelty hotline.