This shocking footage reveals how endangered parrots are poached and have their feathers hacked off as they are exported from the wild into the global pet trade.

The African grey parrots suffer horrendous pain as they are tied up to act as bait for other birds and have their feathers sliced off to stop them escaping.

An investigation by World Animal Protection found that around two-thirds of the parrots die before they can reach an owner.

The endangered parrots have been transported from Nigeria, Mali and the Democratic Republic of the Congo to countries in the Middle East and Asia, they found.

Footage filmed in Cameroon shows the forlorn-looking birds being torn from their natural homes in the wild and being tied up by poachers.

The animal rights group said poachers relied on parrots’ ‘sociable’ to draw wild birds down into large nets or onto tree branches coated with a powerful glue.

The birds are handled roughly by the poachers and held up by their wings or feet, leaving them in obvious pain.

In another clip a man uses a sharp tool to hack at the bird’s feathers and saw off its feathers, a cruel tactic to stop it from escaping.

Large numbers of the parrots also die during transportation as they are kept in dirty and cramped conditions.

World Animal Protection accused Turkish Airlines of allowing several shipments of the endangered birds to be carried on its flights.

The group also blamed ‘lack of staff training and insufficient checks’ on the airline for allowing the pets to be transported.

The airline was one of the carriers who signed a 2017 declaration at Buckingham Palace, backed by Prince William, promising to combat cargoes of illegal wildlife.

MailOnline has approached Turkish Airlines to ask for a response.

Rough handling: A poacher picks up one of the endangered African grey parrots in order to use it as bait to trap other birds, to be exported into the global pet trade 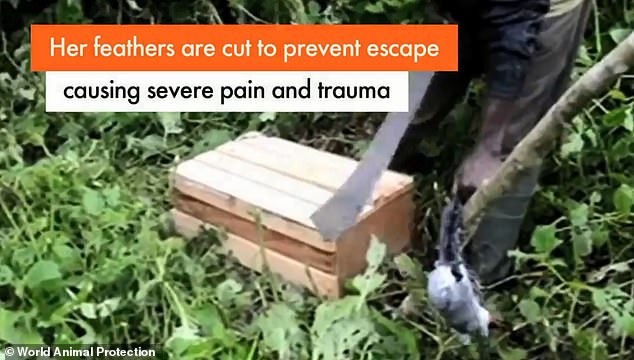 Cruelty: A poacher uses a sharp tool to hack and then slice away the endangered bird’s feathers to stop it from escaping captivity

Cassandra Koenen of World Animal Protection said: ‘Poaching animals for the exotic pet trade is happening on an industrial scale with devastating consequences.

‘Worse still is that the illegal and illicit elements of the trade are often aided by government corruption and inadequate enforcement.

‘Animals suffer at every step of the journey destined to people’s homes: from capture to handling, transport, holding, breeding, sale and the lifetime of captivity in the home.’

Some traffickers had boasted about their African grey parrot shipments on social media, according to World Animal Protection.

One Democratic Republic of Congo-based exporter allegedly said the illegal birds were disguised as legal shipments of green parrots. 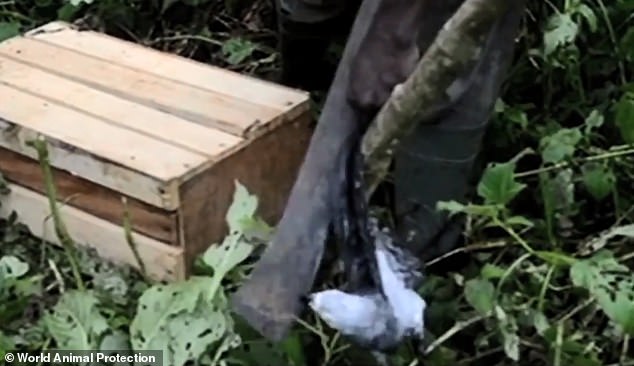 Close-up: The animal’s feathers are sawn off, condemning it to captivity if it survives the dangerous conditions in which it will be transported 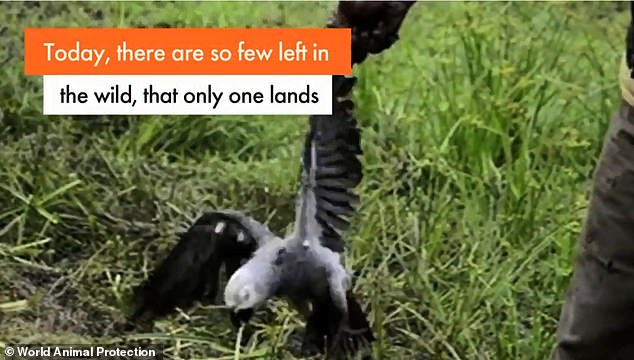 Picked up: A solitary African parrot lured into the trap is picked up by the wing as poachers prepare to sell it illegally

In Ghana the wild population of African grey parrots has collapsed by 90 to 99 per cent in the last three decades, they said.

The organisation said: ‘Most people buy exotic pets because they love animals – but any wild animal in the exotic pet trade experiences suffering.

‘They are very intelligent and sociable, and are not suited for a solitary life in a cage or home. Many become so distressed and bored they pull their feathers out and become ill.

‘Once they are in people’s homes, there is no realistic way to replicate the space and freedom these animals would have in the wild.

‘It is estimated that there are well over one million wild animals kept as exotic pets in the UK, including reptiles, amphibians, birds and mammals.

‘Life in captivity limits the natural behaviour of an animal and places both their mental and physical wellbeing at risk.’ 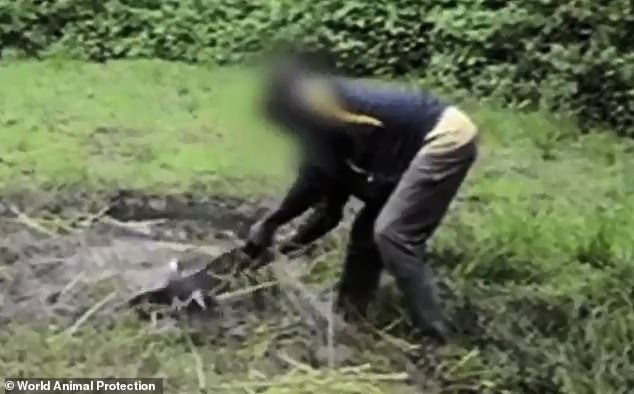 Laying a trap: A poacher forces one of the African grey parrots under a net to lure other endangered birds into captivity 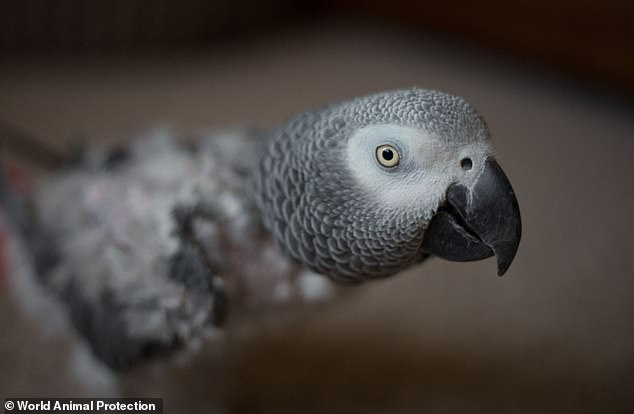 Endangered: An African grey parrot. An investigation by World Animal Protection found that around two-thirds of the parrots die before they can reach an owner