A mother-of-two was left for dead after a car smashed into her as she walked on the pavement, before speeding off.

The shocking footage, taken at 1.35am on November 23 in Gipton, Leeds, shows victim Ellemae Fitzgerald being dragged along the road while on top of the car.

She was then dumped on the ground while the car, being driven by a woman, drove away from the scene without stopping.

Witnesses say the brave victim had pushed a friend she was walking with out of the path of the car before taking the full force herself.

Ellemae Fitzgerald, a mother-of-two, was hit by the car as she walked along the pavement

Police are now hunting the hit and run driver who ploughed into Ms Fitzgerald as she walked on the pavement.

The car, a Vauxhall Corsa, sped away after the collision, failing to slow down or check on Ms Fitzgerald.

In the clip, her horrified friends rush to her side to check on the mother-of-two.

She was dumped on the ground while the car, being driven by a woman, drove away from the scene without stopping 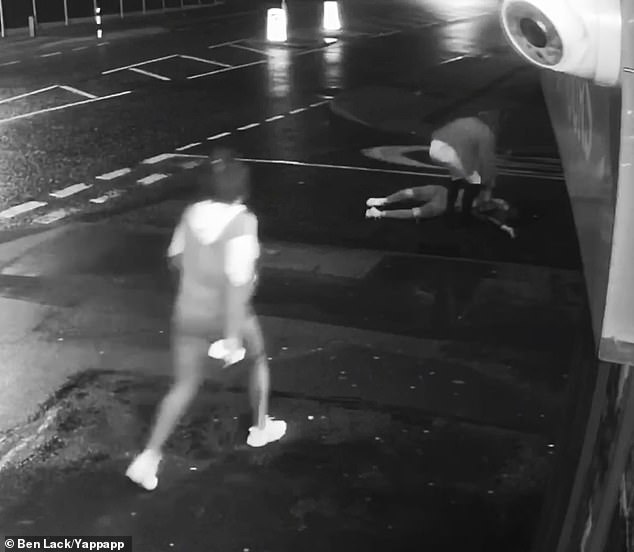 In the footage, her horrified friends rush to her side to check on Ms Fitzgerald, who was taken to hospital

Ms Fitzgerald tries to get up to her feet but is unable to and slumps back down on the ground.

She was later taken to hospital but has since been released.

A friend said: ‘She was a real heroine, pushing a mate out of the way of the car.

‘I just hope the driver is caught soon.’