A real ‘Glasgow kiss’: Horrifying moment a woman head-butts a man in a Scottish bar before punching him repeatedly in the face

Horrifying footage has revealed a woman head-butt and punch a man, leaving him dripping in blood, after she caught him cosying up to another female.

The victim is left with blood streaming down his face after the attack, which is believed to have happened in Glasgow on Saturday.

The man, who appears to be in a bar, seems to be getting intimate with a woman when the attacker comes into view and launches a vicious assault.

Did you see the fight or know the people involved?

Stunned onlookers simply watch the beating for several seconds before anyone intervenes.

After the headbutt and a flurry of punches, blood can be seen pouring from the man’s face which he tries to wipe away.

The victim, who at no point fights back, eventually pushes the woman, who falls over.

Onlookers try to restrain her as the victim heads for the door. 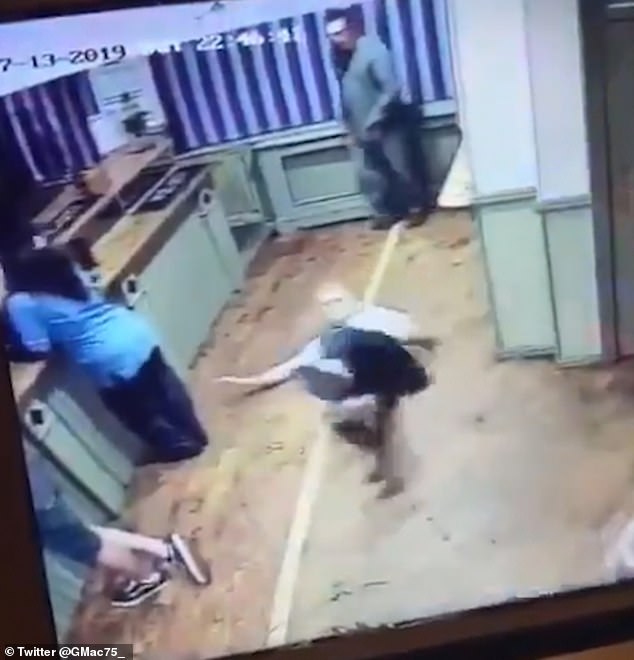 The video appears to have been taken on a CCTV system – bearing the date July 13 – and then filmed on a mobile.

The clip was uploaded to Twitter by Gary McKay, from Glasgow, yesterday evening captioned with: ‘She seems a lovely Lady.’

Some social media users speculated that the assault took place in Easterhouse, a suburb on the edge of Glasgow, or Airdrie.

Police Scotland said they could not comment on the clip without knowing a precise location.