This is the terrifying moment a huge python leaped out from under a trolley and sank its fangs into an office worker’s foot, prompting her to engage in a desperate tangle with the beast. Incredible CCTV shows the killer reptile diving out from its hiding place to attack the admin worker as she walked through a hall in a government building in Bangkok, Thailand, on September 12. The python clamped its fangs down on the woman’s foot, piercing straight through her flimsy looking flat shoes, before aggressively rearing up at her. 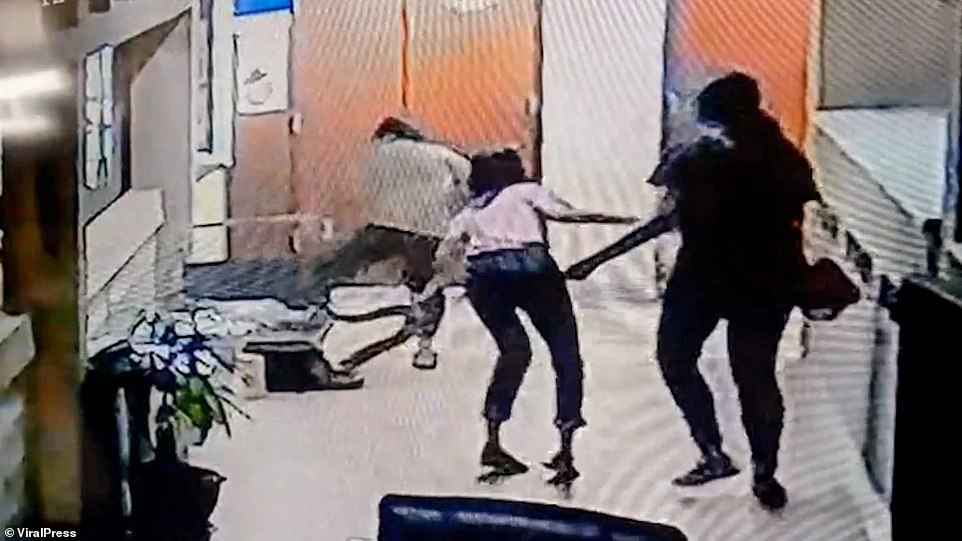 Fearing for her life, the office worker desperately tried to kick away the snake as her colleagues reeled back in surprise and terror, fortunately managing to free herself after a brief struggle. The woman was later seen writhing in pain as she limped away from the scene of the attack inside the Department of National Parks, Wildlife and Plant Conservation. Pictures taken in the aftermath of the attack showed a deep wound on her foot. 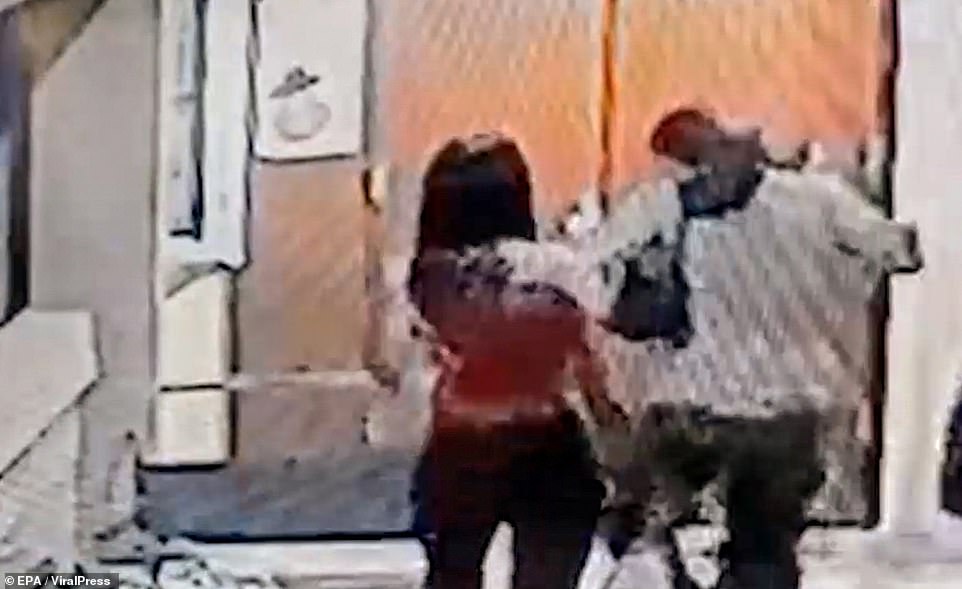 A government spokesman said: ‘The woman who was attacked by the python worked for the Department of Sericulture and only came to the building to visit a friend. She is now safe and has returned to her home in Khon Kaen province. We would like to confirm that it is unlikely that the snake belongs to the department, nor was it brought to the wildlife clinic. We follow strict measures where wild animals delivered to the department have to be tightly sealed in their compartment.’ Officials believe the python may have simply slithered into the building from the street, as Bangkok sees an influx of wildlife during the rainy season. 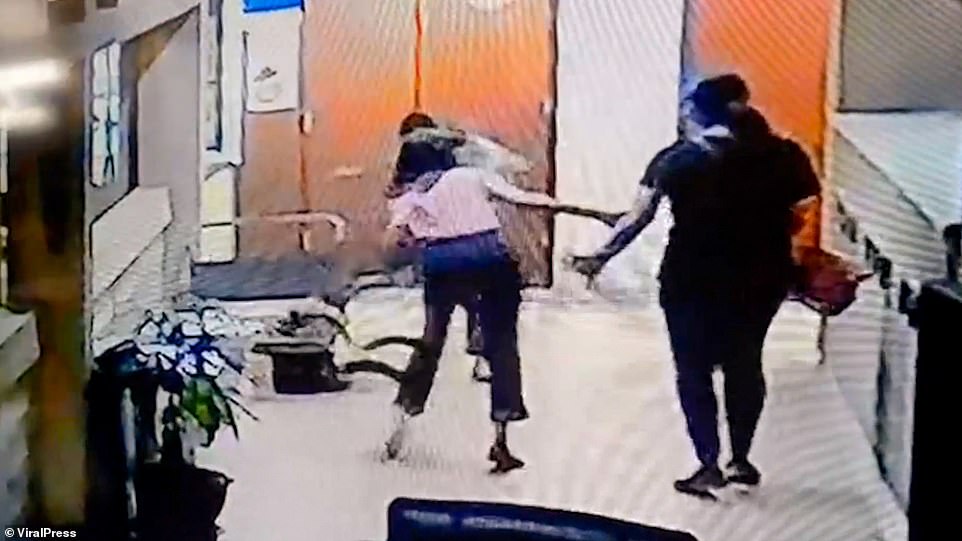 The front of the office building also boasts a number of water features, such as a pond and small fountain in which the snake may have been lurking, they added. The reticulated python is found throughout Southeast Asia, where they live in forests, swamps, canals and even in cities, causing them to come into contact with humans. The species is one of the world’s largest snakes and is known to eat cats, dogs, birds, rats, other snakes, and, occasionally, humans. As monsoon storms between June and October cause widespread flooding across the country, it is common for people in Thailand’s capital city of Bangkok to experience a spate of wildlife invasion in residential areas, in particular from snakes like pythons and cobras. 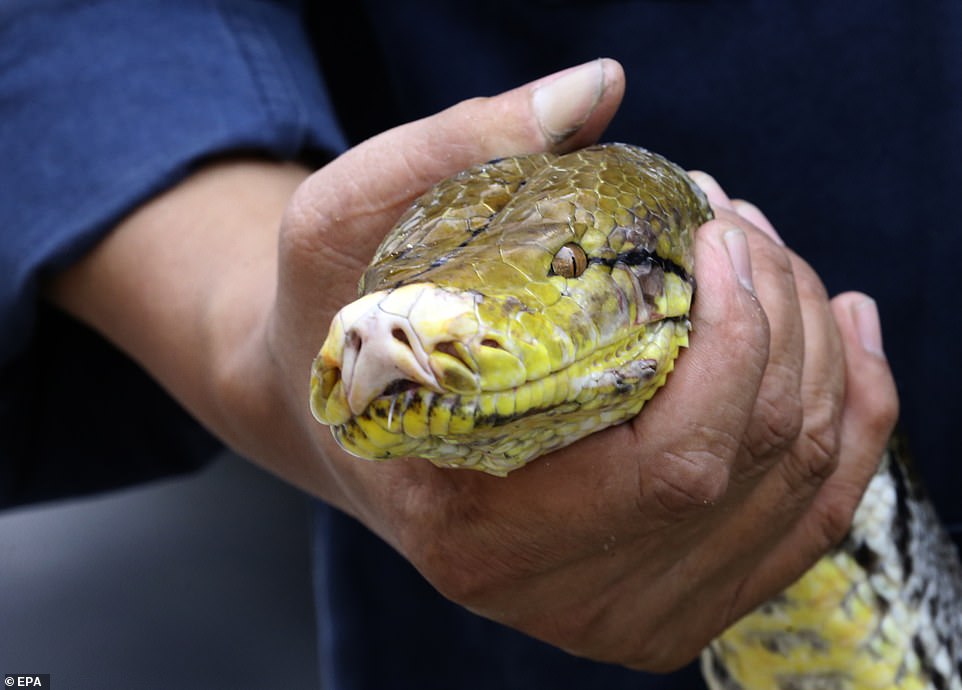 According to the Bangkok Fire and Rescue Department, they receive between 150 to 200 emergency calls a day asking for help to catch invading snakes during the rainy season. About 60,000 of these animals are caught every year, and most of the creatures do not pose any danger to humans. 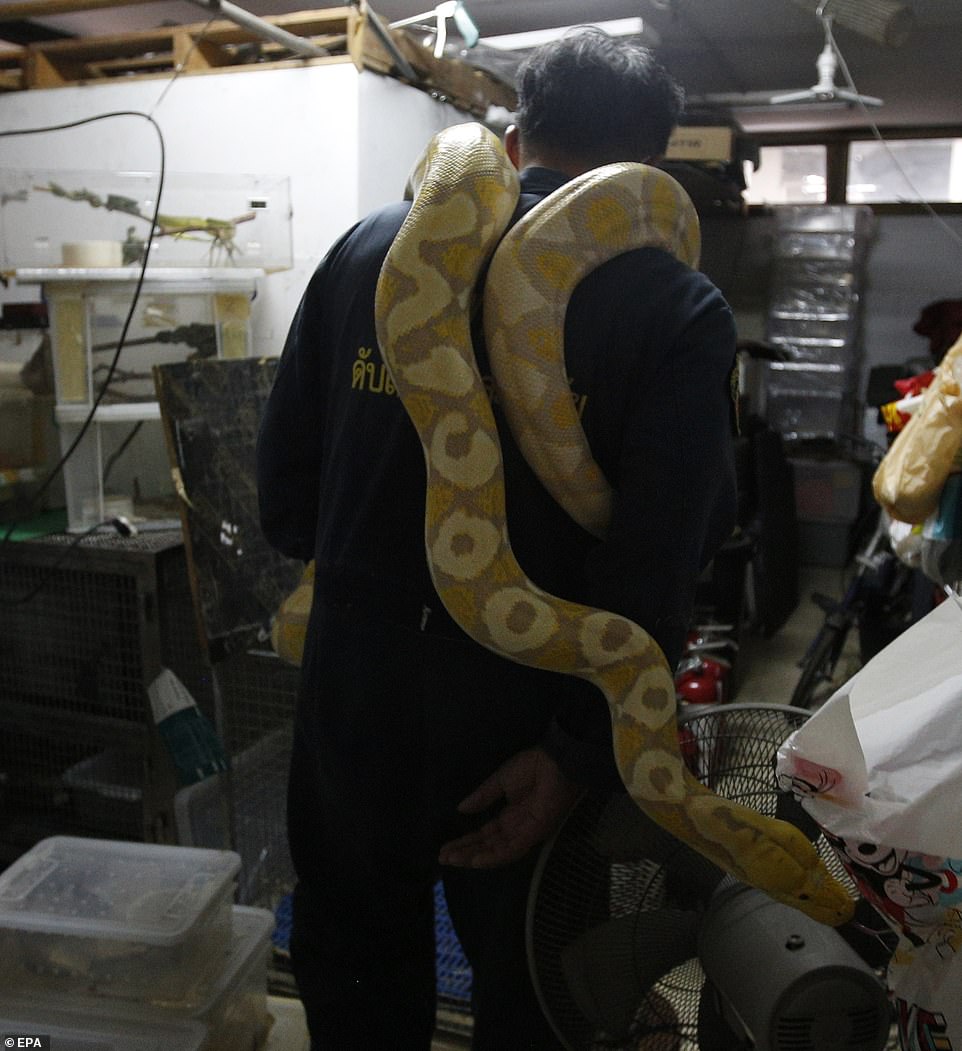 They are typically taken to wildlife shelters or released to the wild after being rescued by firefighters. The rapid pace of urban expansion has increased the likelihood of encounters with these wild animals as their habitats are encroached by the development of the city towards wild areas. Pictured: A Thai fireman carries an Albino Burmese Python on his back inside an animal shelter on September 6, 2022.